RuneScape Mobile, your time is coming! Let’s be real: As much as you love RuneScape, you likely did not lug a desktop to this year’s RuneFest 2019 in order to keep playing during breaks in the festivities. (By break, we mean that time normally reserved for sleeping!) Sure, you could have brought a laptop, but that is still clunky. Luckily for Old School RuneScape players, they could whip out phones and tablets to play.

And soon, all RuneScape players will finally get to do the same: Jason Millena, product director for RS, announced that the mobile version is moving to early access later this year. And it’s coming with free gifts!

What does early access mean for RS Mobile? It means that the restriction on number of closed beta testers will be abolished. Instead, every RS subscriber will have access to mobile version on Android (iOS will be later). And like OSRS, RuneScape Mobile will be cross-platform, so players can play the entirety of the game on tablets and smartphones while out and about (like when attending RuneFest!). Even better, it comes with push notifications: No more waiting until you get home to harvest those potatoes you’ve been growing. You get immediate notification and can jump on your phone to take care of business.

The early access wasn’t the only news shared at RuneFest. Of course Jagex wants to showcase this world in all its glory, even on smaller devices, so Millena showed off the new UI that has been in development for the mobile version that will do just that. He explained,

“One of the things that we really want to do is ensure that what we have and what’s special about RuneScape is brought to the masses. How to get more new players inside of the game, that’s something that we are continually thinking about. Improving that first-time user experience has been really core to that.”

Core to that, Millena continued, is giving the players plenty of space to see and traverse the world — not an easy feat on such a small screen, especially when RuneScape has so many important windows and buttons. “Remember, we’re not actually building out a mobile game from scratch,” he said. “What we’re doing is actually taking RuneScape and we’re making it accessible on mobile.” Easier said than done. 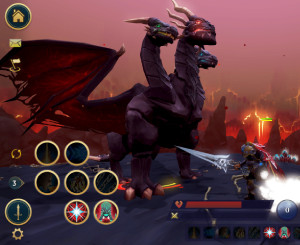 Because the familiar RuneScape interface just didn’t translate well to mobile (it used up too much valuable screen space that effectively blocked a chunk of the world from players), one challenge was the devs faced was how to make to a UI that is both intuitive to RS players and met the needs of a hand-held device. The result was a reconfigured UI custom designed as similar to RS but tailored for a touch screen. The mobile version utilizes a parent and child nesting interface as well as round buttons and a sleeker menu bar, all pushed farther to the sides to open up more screen real estate. The scrollbar on the inventory was also removed so it was easier and more convenient to move and use items.

Additional improvements include a heavily modified escape menu to showcase what a new user would be interested in clicking on and the ability to zoom out more.

Millena announced some gifts that early access players will get: Those who join in the mobile when it releases to early access will get a free mobile founders pack. This includes a new emote, a new pet, and new armor.