Anger over the “international incident” sparked by Blizzard’s ban of a Hong Kong Hearthstone pro player and apparent firing of two Taiwanese commentators over vocal support for home rule in Hong Kong during a Blizzard interview stream has only continued to rise over the course of this week as more and more mainstream websites have covered both the original and event and the reaction around the world.

Probably the most disturbing new development today has been the news that Overwatch League team Dallas Fuel assistant coach Justin “Jayne” Conroy was pressured to delete a tweet supporting the banned player. As Dotesports and Dallas News report, the tweet referred to “the censorship and severity of consequences brought against an individual who was campaigning for a human right social movement.”

CBSNews reported this afternoon that Activision-Blizzard’s stock had dipped as much as 4% this week as the #BoycottBlizzard hashtag continued its frenzied scroll. (It’s recovered a bit now.)

MarketWatch quotes Cowen analyst Doug Creutz as being “concerned that the internal backlash within Blizzard may be more harmful for the company as a clash of corporate cultures comes to a head.”

“In the wake of the departure of long-time CEO Mike Morhaime and the first-ever major restructuring the company has had to go through, there have been reports about concerns within Blizzard about the growing direct influence of Activision corporate in decision-making. […] We suspect that the decision to punish Blitzchung, which almost certainly had input from senior Activision management, was met with dismay by a meaningful portion of Blizzard’s staff. […] Investors are counting on a turnaround at Blizzard to reinvigorate growth, but if the internal culture is in turmoil, there is a lot of risk to that thesis. […] After last year’s disappointing event [at BlizzCon 2018], Blizzard has a lot of pressure to deliver a very positive experience this year. […] The possibility (likelihood) of protestors disrupting events has to be of concern to the company. A heavy-handed approach to dealing with that eventuality could cause further damage to the brand.”

The same publication quotes FactSet’s estimate that 5.2% of Blizzard’s revenue comes from mainland China – that’d be less than half of the 12% it derives from the Asia-Pacific region in total as accounted for in Blizzard’s own investor reports. (We point this out as there’s been rampant speculation that Blizzard’s financial stake in China far outstrips its stake in the western market. This is clearly not remotely the case.)

Worth noting is that it doesn’t seem as if Blizzard has been cracking down on player criticism on at least some of its forums. Multiple threads laying into the studio have been posted and are still up – including this one that informs Blizzard that it violated the “human decency clause” of the players’ terms of service and lays out the pentalties players will be applying to Blizzard until it rights its wrongs.

However, other players claim that Blizzard is blocking at least some Hong Kong-related battletags on Battlenet.

Protesters have also tried their hand at different forms of protest around the web, like the folks who apparently vandalized Blizzard’s Irvine HQ’s entry on Google Maps so that it’s listed as a “Chinaware store.” (That’s the image in our header up above.) [Update: It’s back to being a “corporate campus” now.]

Just catching up? Here’s the short version: Professional Hearthstone esports player Ng “blitzchung” Wai Chung wore a gas mask to a post-match interview on Blizzard’s official Taiwanese stream and shouted “Liberate Hong Kong, revolution of our age!” as the casters ducked behind their desks. Blizzard cut the stream and wiped the videos, banning Ng for a year under a vague competition rule that allows Blizzard to ban pretty much anyone for anything. It also clawed back $10K in winnings and booted him from the tourney while firing the two Taiwanese commentators, who’d said they’d been blindsided by the segment and dismissal. Since then, players, politicians, and other pro gamers have made their anger at Blizzard’s actions, seemingly more about appeasing China than about preserving esports, rather loudly known.

You can read up on our complete coverage of the incident and fallout from it right here:

Acti-Blizz’s prospects after pouring hate on already suffering Hong Kong protester’s who are getting shot, tear gassed and battered by the communist regime China? The word “Abyss” comes to mind, and not Pearl Abyss either. The bottomless hole kind of Abyss.

Good. They need to be worried. What they’ve done is absolute B.S. 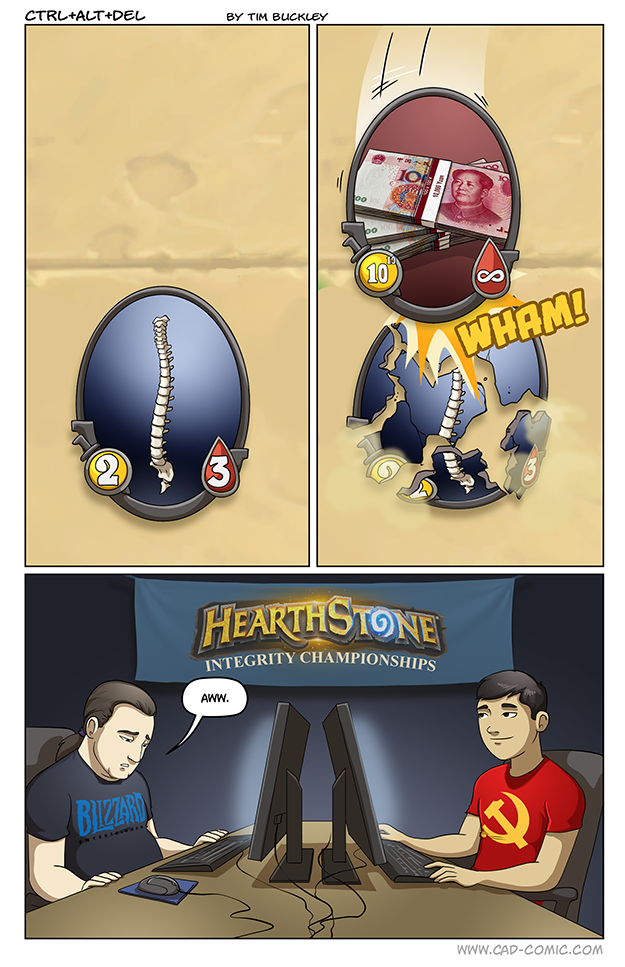 Foreign financial investments and influence is illegal in some countries. Unfortunately America is reaping what it has been sewing for decades and money value is stronger than moral value for the top of the corporate world. I haven’t purchased an EA, Activation Blizzard, Take Two, published game in 8 years. Ubisoft and Bethesda are working their way onto that list.

Decide what your values are and control your OWN piece of the world. Dont support those who don’t care about people. Dont purchase products from or take employment gains through those who don’t see their workforce and customers are respectable. It’s your life, I get that. Just look at whats happening around you and take it into consideration even if it doesn’t affect you.

The same publication quotes FactSet’s estimate that 5.2% of Blizzard’s revenue comes from mainland China – that’d be less than half of the 12% it derives from the Asia-Pacific region in total as accounted for in Blizzard’s own investor reports. (We point this out as there’s been rampant speculation that Blizzard’s financial stake in China far outstrips its stake in the western market. This is clearly not remotely the case.)

I think it is more about projected revenues. They are currently attempting to enter the mobile market (the diablo fiasco), and the mobile market there is huge. All of their work towards that will be wasted if China decides to ban them.

There’s something here that’s a little bit different than the usual Outrage of the Day (hour?). For one, it doesn’t concern a loot box, monetization, release schedule, kickstarter, or doofus tweets from CEOs. It’s about the utterly ruthless repression of criticism of China by a corporation currying the Chinese market.

Blizzard has literally become an arm of the Chinese authoritarian government.

That should alarm every person living in a nation that guarantees freedom of speech or expression.

Some people may be trolling or snarking about this as though it were any other OotD, but there are those who are not because they see the insidious intention behind the action.

wowhead is 100% owned by Fanbyte (formerly ZAM Network) – Fanbyte is a wholly-owned subsidiary of Tencent Holdings.

Tencent owns 100% of wowhead (and Thottbot, Blizzard Watch, mmorpg.com and many other MMO-related websites)…

…this may explain why the coverage is rather quiet in this area. /sigh

That answers my question from a day ago regarding Blizzard Watch.

It was definitely not my understanding that Tencent owned MMORPG.com or Blizzard Watch through Wowhead. I have a feeling this is a misunderstanding because ZAM runs an ad network that iirc covers a lot of sites, including those two. Doesn’t mean they’re owned by ZAM.

And in case anyone ever wonders, I own MassivelyOP and Overpowered Media Group, LLC outright. Our ad network is CPMstar, but they do not have a stake in our company.

Update 10/12: I’ve confirmed now that MMORPG.com is not owned by Tencent and is in fact still owned by the two (American) individuals who’ve owned it half of forever. Fanbyte does not own MMORPG.com.

To the best of my knowledge, BlizzardWatch is owned by it’s lead writers in a similar way that MOP is. I do not off the top of my head know who that is, but then again, I didn’t know that Bree was the owner of MOP so it’s clear this isn’t an area I put any effort in :)

I think BW just honestly does not know how to handle the news of it; not that they haven’t done critical pieces on Blizzard before (they had plenty to say on the Diablo Immortal announcement), but they are not a ‘news’ site in the same way that MOP is, and this is more political than anything else that has happened.

They aren’t shutting down or censoring comments in their posts, though, so there’s ample discussion of the event – even some that they take part in – so it might be a case of “What can be said that hasn’t already?”

But, I do not speak for them of course, just speculation.

Hey, Bree, you and the team are knocking Blizzard coverage out of the park, and I’d also like to thank you for this week’s fantastic Massively OP Podcast interview with Gamigo’s Merv Lee Kwai about this upcoming ArcheAge reboot!

If they ever actually make a public statement about this shit show, and don’t cancel Blizzcon I have no doubt it’ll include something like this:

The Official Blizzcon 2020 Free Speech Zone is conveniently located at Westhaven Park and only a twenty five minute stroll from the main entrance of the beautiful Anaheim Convention Center!

Something I just thought about. If Blizzcon goes poorly and the stocks drop again, will there be another round of layoffs?

The layoffs were already planned with the corporate restructuring to shrink expenditures/margins that had been in quarterly reports prior to and after that fiasco. That was mostly on the new CFO at the time ensuring job security and a tidy sum for a yearly bonus, if I remember correctly.

So it will probably happen again if the quarterly reports are bad as a result in order to fix the margins.

Why hopefully? Those people are innocent in all this.

The restructuring plans and costs were still apart of last quarter’s report, so while the labor aspect might be done with for now, other aspects are still on going. You can only reduce margins due to personnel by so much before you don’t have enough people to efficiently run a company. Infrastructure investments also get lumped into these, as they will account for reduced costs in the future and a lot of them are “green” which can be used in write-offs.

They’ll find new jobs, America is the ‘land of opportunity’ after all.

No, they will all go to fund their own successful game development studios, as some crazy libertarian here claimed in response to the previous layoffs.

Arms wants Blizzard to burn. I kinda understand the sentiment.

…I am just not of the sentiment that others should burn with it. Nor will I ever be.

If stocks drop, Tencent or other CCP affiliates may come in for the sweet deal and increase CCP holdings. Additionally, most significant trading these days is automated. A few individuals here and there won’t make much difference. People not buying products or paying subs from Acti-Blizz will have the greatest impact.