So here we are at the end of my first real deep dive into a survival sandbox. Citadel: Forged with Fire is, by all immediate impressions, very alike the giants whose shoulders it stands on, only with a more magical slant to it and a few ribbons of fat trimmed away from the sub-genre’s usual trappings. It’s also kind of underwhelming at points, strangely janky at others, and pretty one-note in a lot of ways.

And I can’t wait to play it again. 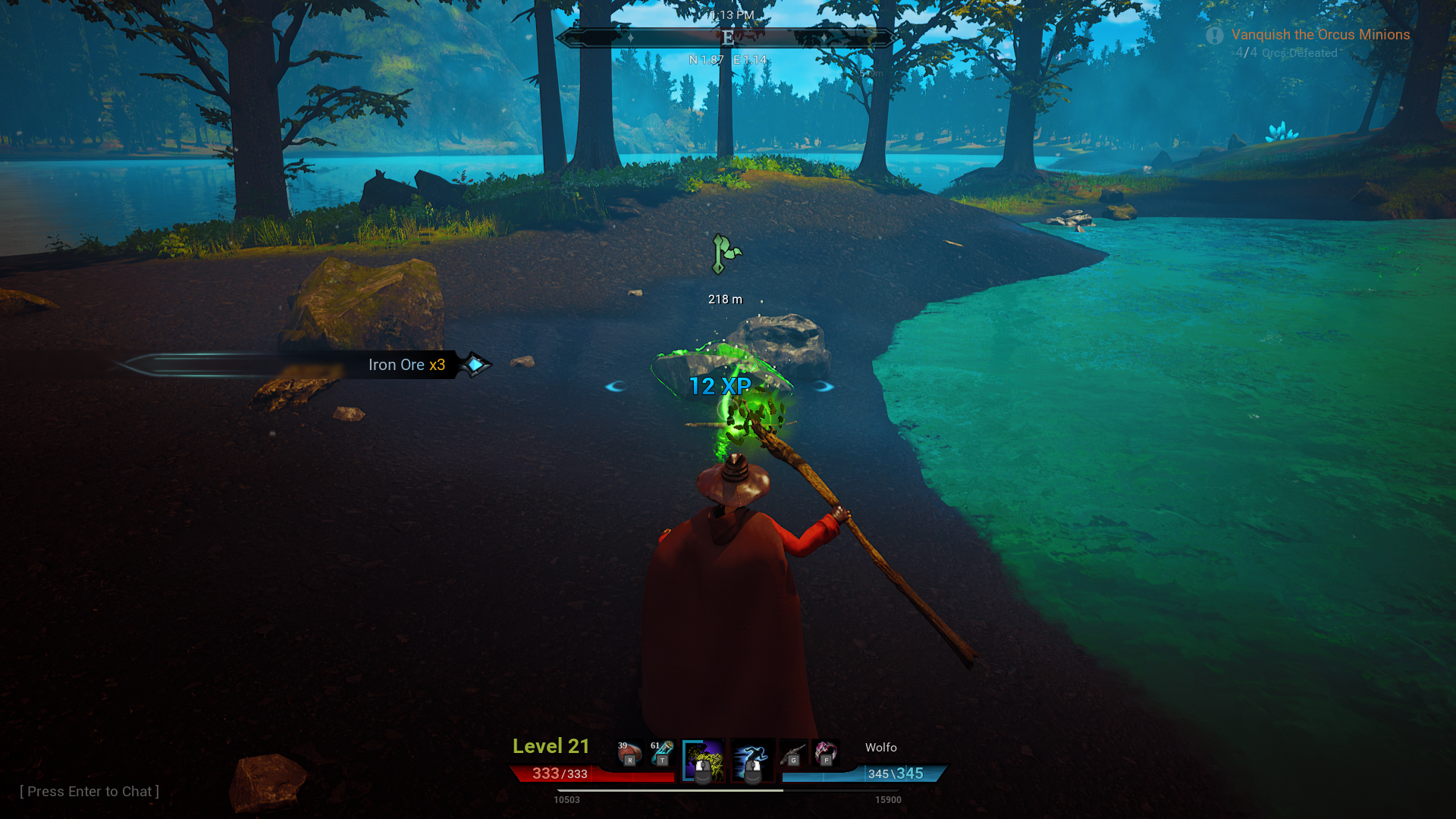 Honestly, I think much of my enjoyment in Citadel is tied to a variety of things. The decision to remove the need to feed and water your avatar like a high maintenance plant is a big one. I don’t want my character to be a Tamagotchi, I want it to be a vehicle to adventures, and having to stop what I’m doing to ensure a constantly deprecating bar is the opposite of fun and the laziest implementation of “challenge” since the design choice to intentionally remove checkpoints.

The theming of Citadel also seemed to speak to me. Ignus isn’t exactly what I’d call a riveting fantasy world, but being able to be a mage that wanders around the wilds is a surprisingly barbed hook. It’s probably the hat, if I’m honest. Or the robes. Or both.

I also think Citadel just happened to arrive to me at the right time. It doesn’t happen often, but sometimes a game just lands in your lap that captures personal lightning in a bottle. It feeds some sort of gaming itch that you didn’t realize you needed to have scratched, and while this game arguably doesn’t do the survival sandbox game in a new way, it does it in just the sort of way that appealed and drew me in. Call it “My First Survival Game” if you have to, or “easy mode” if you’re a derisive jerkface, but Citadel just stuck. 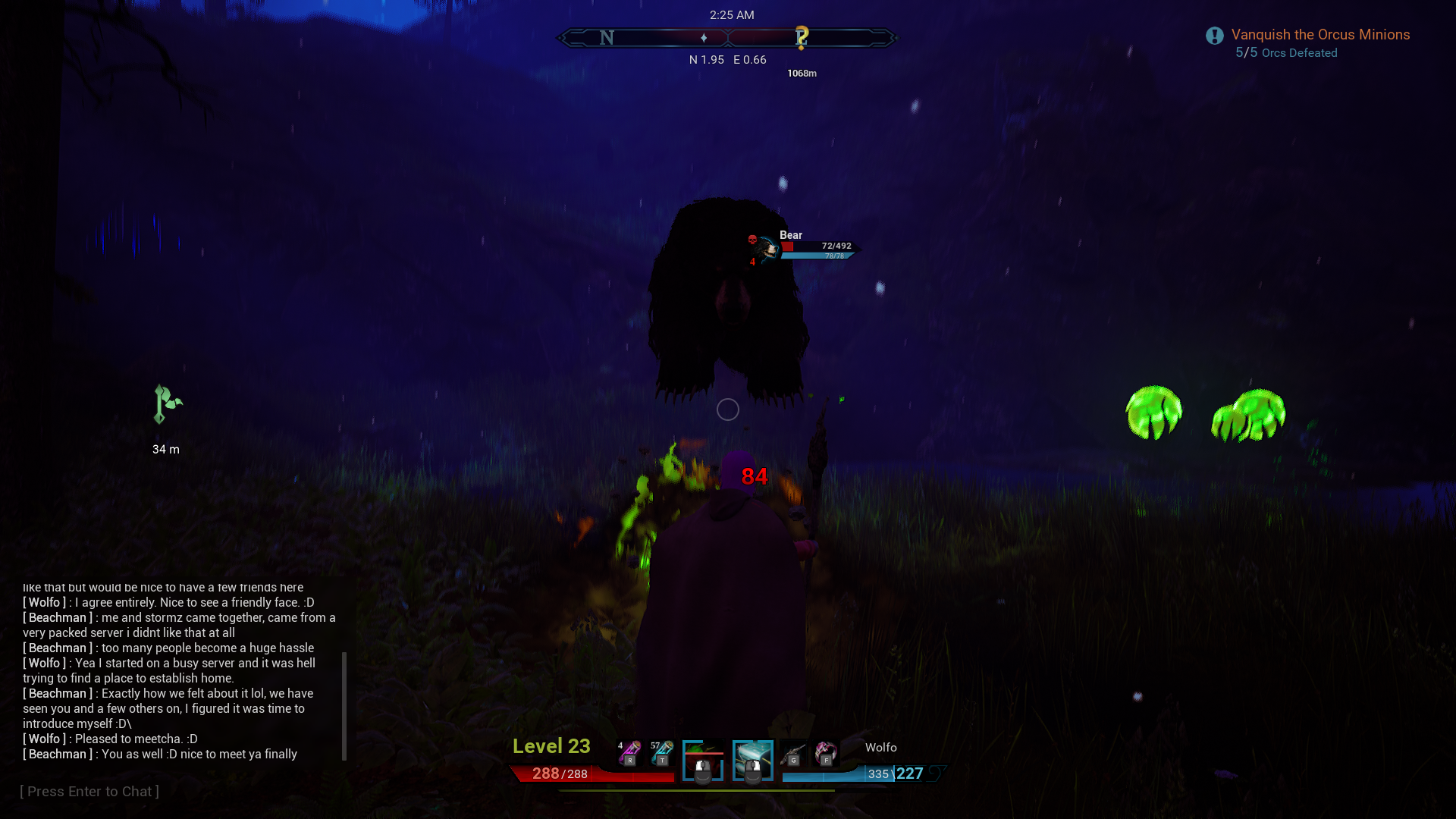 That’s not to say that I’m utterly blinded by its few wiles. There are plenty of things to complain about here. I hate the throne decay mechanic even if it makes a modicum of sense in terms of ensuring land can be built on. I wish that I could keep a pet for longer than a few minutes unless I ram scrolls into its inventory. I really wish the missions and points of interest were more interesting. I wish I could turn off bloom effects.

I also wish the magical stuff – the one truly unique thing about Citadel — made more of an impact. I’m not asking to be able to summon mountain-sized comets from the sky at tier 0, but I also really wanted the spell effects to be way more interesting. As it stands, the best spells I have are a spell that makes my movement speed better and the laser that fires from my wand. There were more than a few times I’d find a new spell, think about how cool it sounded, crafted it, then got painfully underwhelmed by the lame duck effect.

All of these and others (unable to rotate placed furniture, unable to upgrade house pieces, really slow flying broom) are certainly those thousands of tiny cuts that could otherwise kill Citadel for me, but then I fired up the game on a whim and decided to explore an area in search of a certain material I needed for a Repair Bench and ended up on an adventure. 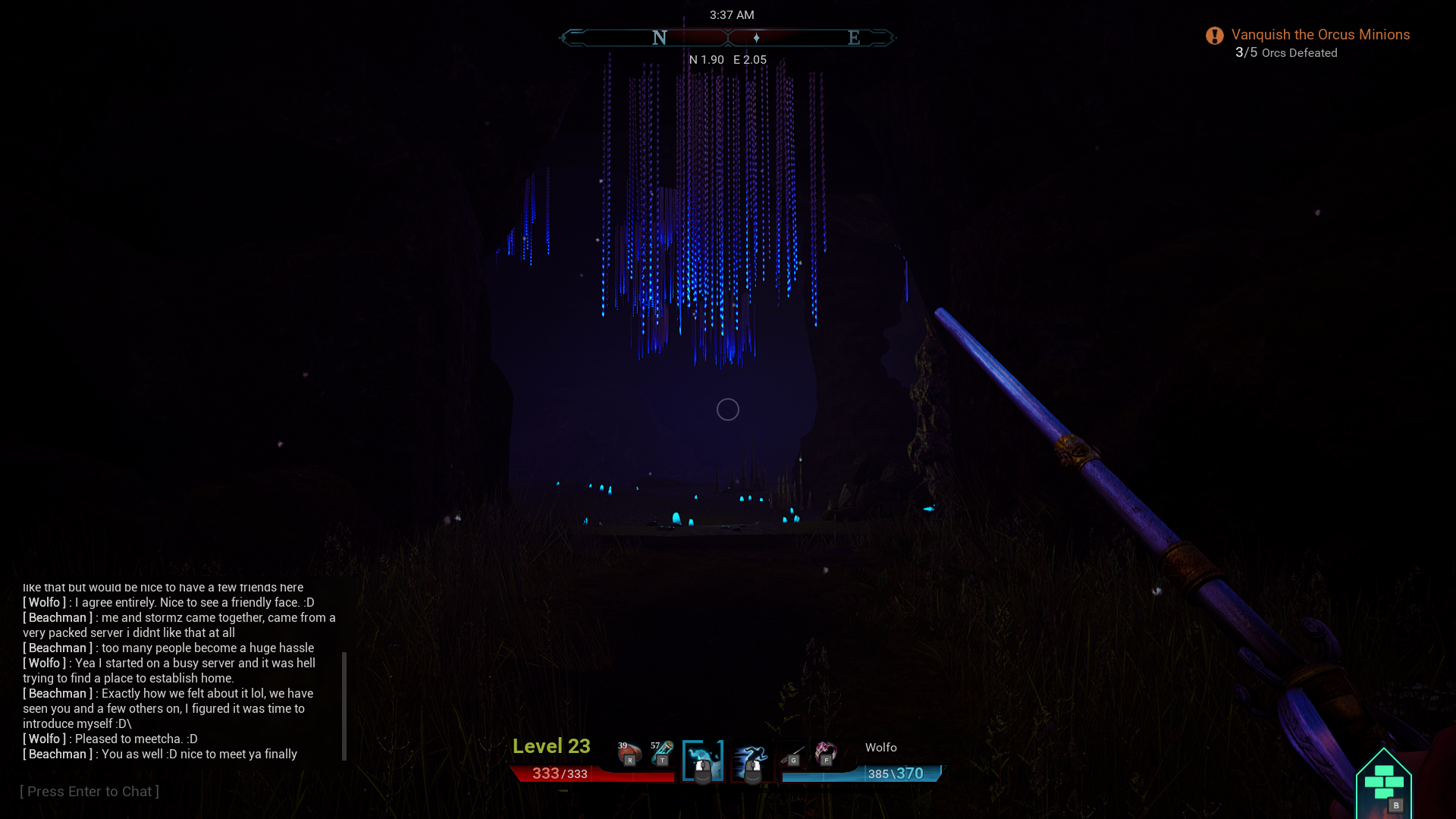 See, there are caves dotted all around the map, but apparently not all caves are created equal. There are larger caves that actually have a level range to them like certain map areas, like a sort of miniature dungeon. In looking for this building material, I wandered my way towards one of these special caves and came across some sturdy yet surmountable challenges. I even found a place that was full with not only the material I needed, but every type of spell essence in the game.

Curious, I continued to push forward into another cave that had a bit of a higher level range to it. This one was full of strong orcs and possibly some other goodies too, but I couldn’t plumb its depths too far before I was beset by more orcs than my solo self could handle. It wasn’t much, but it was another layer to Citadel that I didn’t know existed. And it was, once again, another little thing to look forward to and work towards.

And this game is full of those little steps. Perhaps there are other survival sandboxes that add those layers and do it far more elegantly than Citadel does – I’m considering probing Conan Exiles to see if it twangs those same strings for me – but there’s something about this game that just keeps making me enjoy it even though I’m fully cognizant of its shortcomings. Love is blind sometimes.

Also, I’m fully aware that my enjoyment is very likely tied to joining a PvE server. I’m pretty certain I wouldn’t be this glowing if I were in a FFA PvP server. 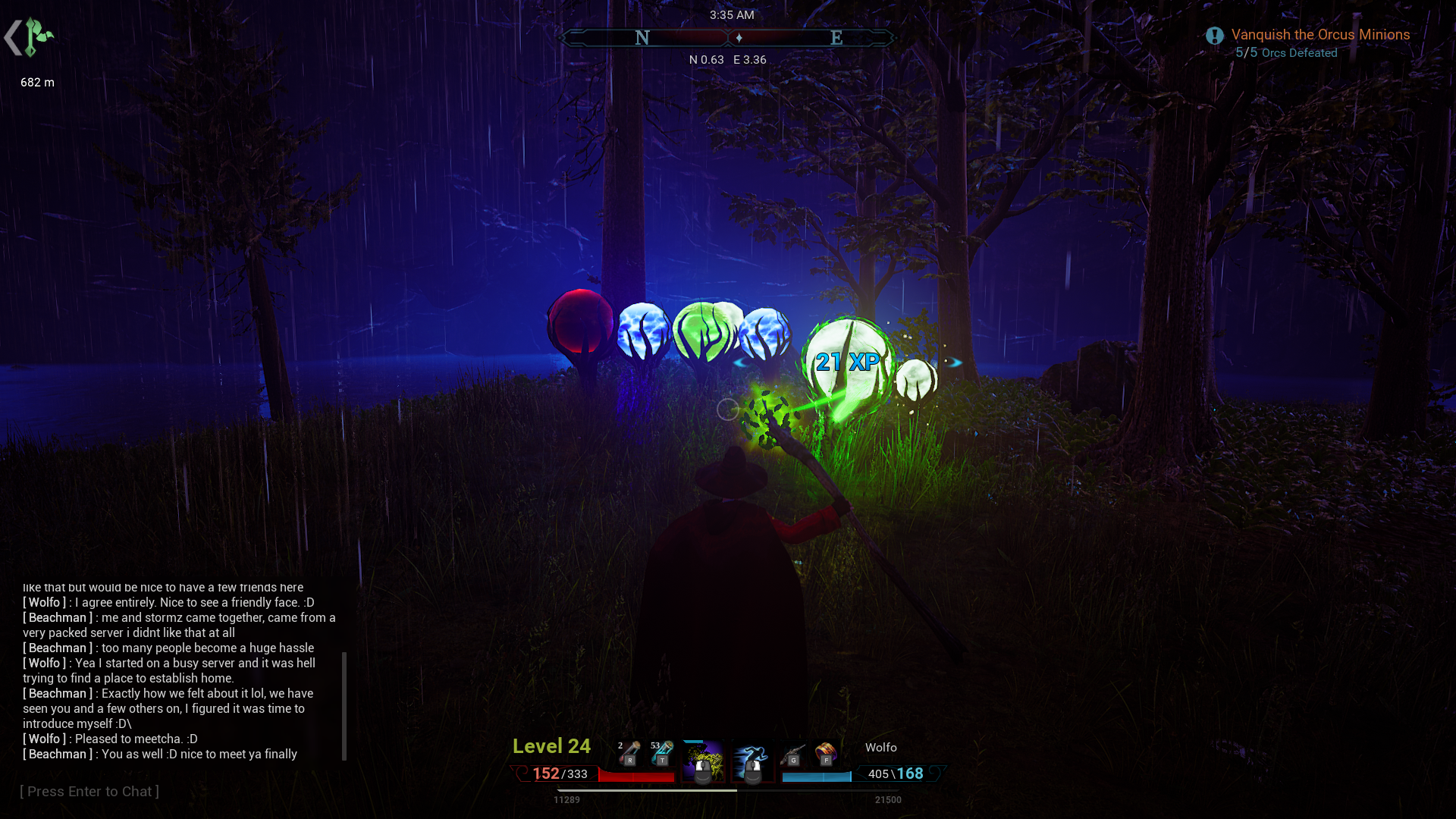 I’m always open to suggestions on games that do what Citadel does better (except for ARK: I tried that one and it didn’t take), but for now I’m completely content with taking a moment to slip on my robes, put on my big Gandalf hat, and have a ramble around the woods.

That was then, of course, and this is now. And now we have Project Gorgon to look forward to! I have been impossibly curious about this game, but I also understand that it’s something of a bear to begin with. Mercifully, the recently discovered tutorial videos that were shared here will likely guide me along, and I’ll be watching the lot to get at least a reasonable foothold on things, but this is Choose My Adventure and there needs to be at least one poll question, so here it is:

Which starting skill should be my primary in Project Gorgon? 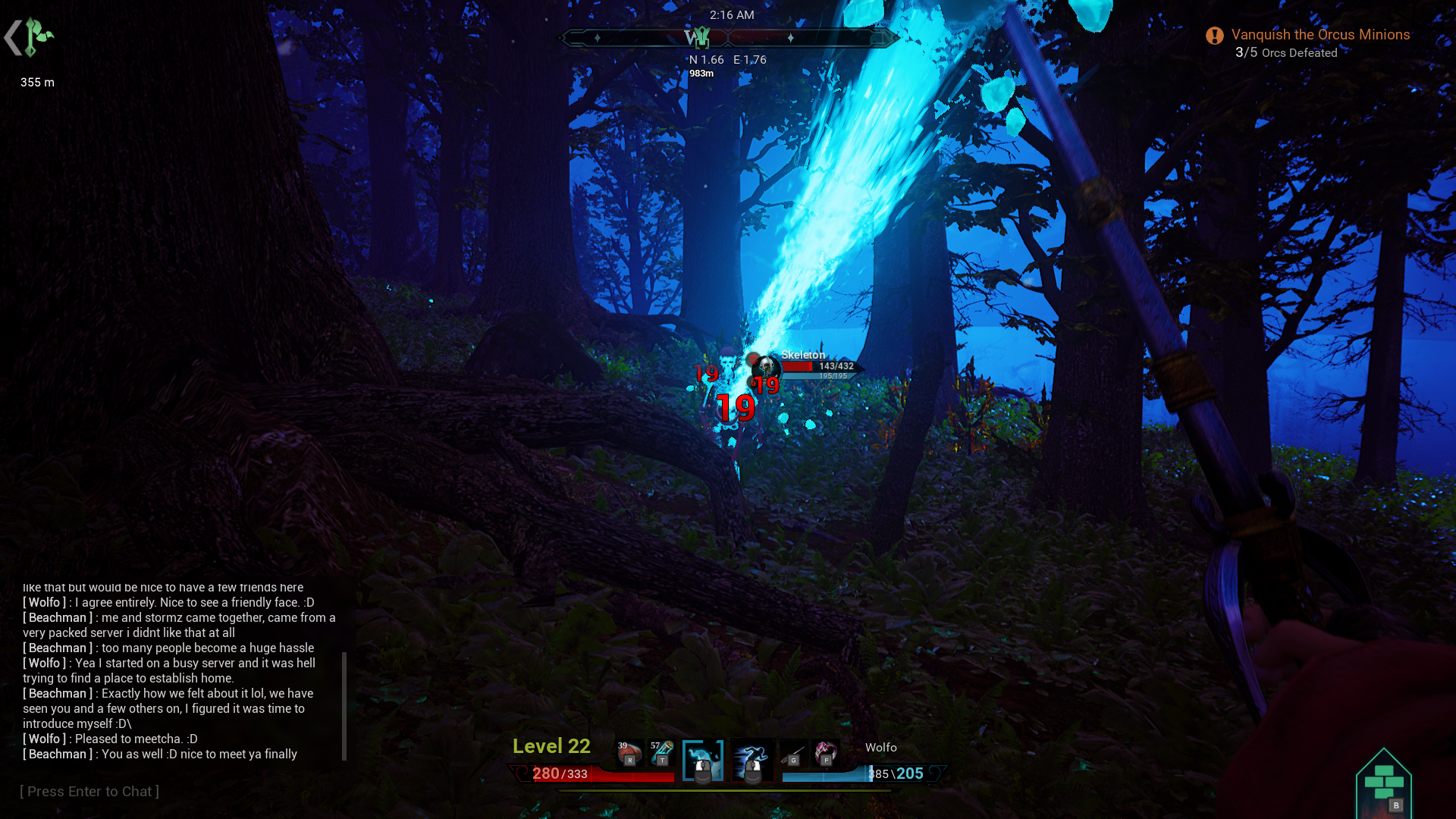 Like usual, polls will close at 1:00 p.m. EST on Friday, December 6th. I’m pretty darn nervous about starting this one, if I’m perfectly honest, but I hope I can at least make this enjoyable, and I look forward to having you all join me for the ride.