As this afternoon’s community event in Vegas, ZeniMax Online Studios formally announced the latest year-long theme for The Elder Scrolls Online, The Dark Heart of Skyrim. Yes, the same one teased in the trailer a few weeks ago, but now we have details!

END_OF_DOCUMENT_TOKEN_TO_BE_REPLACED
Like the Year of the Dragon in 2019, this year’s story arc will revolve around a singular premise, specifically the looming threat of vampires in the Skyrim province. The adventure will once again be told through quarterly updates, the first two of which now have names: Harrowstorm is up first as the game’s next DLC, while the “gothic and gritty” Greymoor is the large chapter coming in May. Let’s dive in to explore everything we learned!

Greymoor, Elder Scrolls fans might recall, is an abandoned fort in the single-player Skyrim title, but the significance of this location in the ESO timeframe (900 years before that game) is unclear. The chapter opens up the snowy region of Western Skyrim, with iconic Elder Scrolls locations like Solitude and Blackreach. The story in Greymoor begins with the mysterious storms discovered in the Harrowstorm DLC (we’ll get to that next) and eventually leads to a vampiric threat that must be confronted. ZeniMax is calling the chapter one of its “darkest” to date and says we can expect about 30 hours of content for our money.

Fan-favorite half-Nord/half-giantess Lyris Titanborn – once again voiced by Jennifer Hale – returns to aid adventurers through this new snowy region. Lyris’ return marks the third member of the original five companions to make a re-appearance since the conclusion of the main story, joining Abnur Tharn and Sai Sahan. Only antagonist Mannimarco and the mysterious prophet remain unaccounted for.

Greymoor boasts a new collection system called antiquities. This system will lead players around new and old ESO locations in search of relics that unlock various rewards such as gear, mementos, and furnishings. Essentially, these mechanics will encourage players to explore the vast landscape made available to everybody who owns the game.

A new 12-player trial called Kyne’s Ages will also launch with Greymoor, as will a re-working (re-VAMPING?) of the vampire skill line, the latter of which will be available to all players via the quality-of-life improvement update. Plus ZeniMax is teasing new world events called Harrowstones. 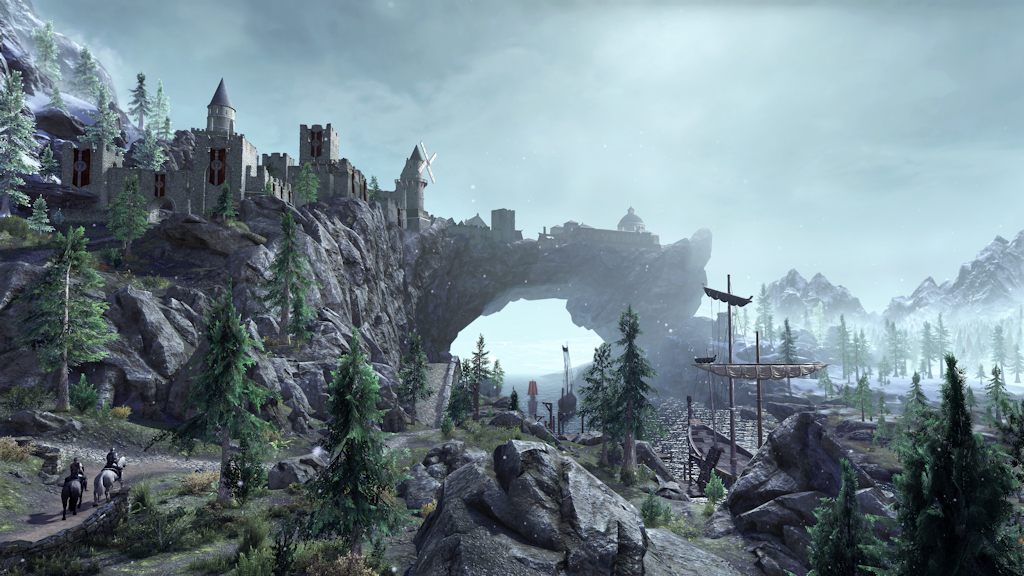 Serious TES fans might remember last year’s curious decision to not include a physical edition of the Elsweyr chapter. Fear not, collectors of fine statues, as this year sees the return of the physical collector’s edition, which includes various goodies such as a steel box, a map of Western Skyrim, replica coins from various provinces, and yes, a sweet-looking statue of a vampire lord. In fact, preorders are already live.

Also worth noting is that this chapter will once again be playable by existing accounts and brand-new characters, meaning everyone can jump in without grind or preamble.

“New players can jump right into The Elder Scrolls Online: Greymoor and start a character in an updated tutorial and starter area in Western Skyrim, without needing to play previous ESO content. Since the original base game is included with The Elder Scrolls Online: Greymoor, new players also have access to hundreds of hours of additional adventures throughout Tamriel. New players get immediate access to the base game, Elsweyr, Summerset, and Morrowind Chapters, with any Greymoor full game pre-purchase.”

Greymoor will be available for PC/Mac players on May 18th and for console players on June 2nd.

Harrowstorm and the other DLC

The first-quarter update, arriving much sooner – in February – is called Harrowstorm and will contain two new dungeons: Icereach and Unhallowed Grave. Icereach will have players investigating mysterious storms in the Sea of Ghosts, while Unhallowed Grave takes place in a, well, unhallowed grave. We don’t have a lot of additional info on this DLC beyond the fact that it’ll begin the Dark Heart of Skyrim content and “lead directly into the Greymoor Chapter” alongside a “free prologue quest.” We can expect it on the PTS, at least, next week on Monday, January 20th.

Likewise, ZOS gave scant details about the third quarter dungeon update and fourth quarter story update, apart from a tease about The Reach, but no doubt this late-year content will eventually wrap up the Dark Heart of Skyrim.

Disclosure: In accordance with Massively OP’s ethics policy, we must disclose that ZeniMax paid for our writer’s travel to and accommodation at the Elder Scrolls Online event. The studio has neither requested nor been granted any control or influence over our coverage of the event.
Advertisement