END_OF_DOCUMENT_TOKEN_TO_BE_REPLACED
At this week’s live reveal of the Dark Heart of Skyrim for The Elder Scrolls Online, I had the chance to sit down with creative director Rich Lambert to talk about the new chapter, some of the challenges the ESO team has recently faced, and how the devs plan to differentiate the Greymoor chapter from the Skyrim players are already familiar with. Let’s dig in to everything he told us!

MassivelyOP: This event is quite a bit different than last year’s chapter reveal. Why did you go with a live community event this time around?

Rich Lambert, ZOS Creative Director: I think the biggest thing is [that] we are where we are today because of the community. They really make the world. We make the game, but they make the world, and we wanted to share the excitement with them. 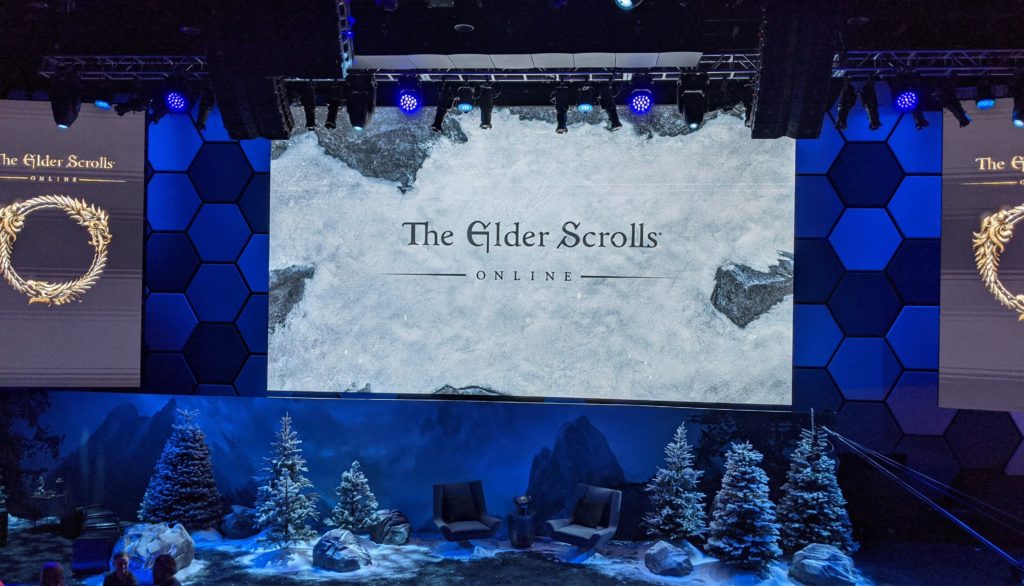 Was there any discussion about waiting to release the Skyrim-themed chapter until next year (2021) to coincide with the 10-year anniversary of The Elder Scrolls V? If so, what made you decide to release this year instead?

I mean, it came up. But really what we try to do when we tell stories and build locations is kind of forge our own path. That’s why this year, this Dark Heart of Skyrim, is focused on werewolves and vampires and storms. It’s a different story. It’s not dragons in Skyrim. That’s been done, and they frickin knocked out the park. So why compete with that? Why try to retell that story? Do your own! So that was the big thing. We’re going to Skyrim. This is the next place. It is very different from Elsweyr. In terms of the biome, it’s snow and ice versus desert. We just kind of do our own thing.

I haven’t heard a lot of complaining about the Vampire skill line (especially the passives, which people seem to really like). Why did you decide to re-“vamp” that skill line instead of developing a brand new one?

What we wanted to do – because vampires play an important role in [the new chapter] – is turn that skill line into an experience. Right now, people become vampires for the Undeath passive. You might use some of the other abilities for utility, but really, it’s just that, and you know, you don’t interact with the feeding mechanism. You just kind of do nothing, and you go to max level and you don’t have to worry about it. So we wanted to make it feel like you were a vampire and make it feel like all of the abilities worked together to be that vampire and convey that fantasy.

I see that you’ve gone back to offering a physical collector’s edition this year. Was this due to player feedback or did offering the physical items separately for purchase in the Bethesda store (last year) not pan out as you’d hoped?

Purely because of player feedback. We got hammered because there was no CE (collectors edition) and they wanted one. So we listened. And it’s a really, really cool set.

Lyris is back! Tell me about the idea of bringing back the members of the five companions. Has this been planned for a long time?

This has been planned for a while, yes. And really the reason we wanted to bring them back is because they resonated so well with players. It’s something that we always think about when we’re creating new stories and going to places – who are the characters that people really, really enjoy and really like. And going through with this year-long storyline has really allowed us to elevate that and focus on some of these characters that were so iconic in the main game that maybe didn’t necessarily get the amount of love that they probably should have at launch.

Some of the things from the performance improvement plan roadmap have slipped (in terms of timeline). Can you give us a little detail as to why things are taking longer than expected?

They’re very, very hard problems to solve. You know, it’s not an exact science as you start kind of digging under the hood of things. As you start shaking loose some things, the problems morph and manifest in other ways and sometimes during development as you uncover a problem in one particular area, or you know about a problem in one particular area, something else pops up way over here that is a much higher priority. I think a really good example is Looking for Group. We worked really hard on refactoring and then re-architecting that system. And when we released it, we thought it was in a good state, and it wasn’t. And we had to get it into a good state before we could move on to the other things. So we did, and that’s ultimately why a lot of the cold storage stuff slipped out while we were still working on the Looking for Group system.

Have there been any personnel challenges with trying to focus on both new content and performance improvement?

No, because they’re different teams, different groups. An engineer is not going to write a quest. Where we have contention is when the same engineer has multiple problems he/she has to solve. That’s what happened with LFG is the person that was responsible for working on LFG is also one of the database people that would do the cold storage work and so that work gets pushed down because this (the LFG system) has a higher priority.

Are you working in tandem with TES6 team at Bethesda in any way?

[Laughing] So what I will say is we have a really good working relationship. They are ultimately the IP holders. They vet a lot of the work that we do, but we are also completely separate teams. I don’t know what they’re working on in terms of TES6, so I can’t really speak to that.

People unfamiliar with ESO might see a Skyrim chapter as just another chance to “milk” Skyrim for every dollar possible. Are you doing anything to preemptively combat that mindset?

I mean, Pete [Hines] kind of made a crack at it too [during the event stream]! Yeah, we know that that’s a potential sentiment. But I think that’s why we’re calling the chapter Greymoor instead of calling it Skyrim. We’re not trying to tell people “this is Skyrim in Elder Scrolls Online.” This is our version of Western Skyrim, which is a very different story. It’s going to feel familiar, but it’s our own take on it. And I think that’s the biggest difference.

Has there been any thought to changing cadence of content releases or are you pretty comfortable with it?

We’ve gotten into a pretty good groove. Our playerbase seems to really enjoy it. They know that at this regular cadence, they get updates to the game.

We’d like to thank Rich Lambert for speaking with us! Make sure you snag your free Plus time if you’re playing this weekend in anticipation.

Disclosure: In accordance with Massively OP’s ethics policy, we must disclose that ZeniMax provided our writer’s travel to and accommodation at this event. The studio has neither requested nor been granted any control or influence over our coverage.

Traverse the troubled land of Tamriel in the Elder Scrolls Online! Larry Everett and Ben Griggs will be your guides here in Tamriel Infinium on Wednesdays as we explore together the world created by ZeniMax and Bethesda in one of the biggest MMOs in the genre. Larry and Ben welcome questions and topic ideas!

Of course Greymoor is going to be different from Skryim – there’s about a thousand years between the two, if I remember my lore… sure, there’s jocularity, but I fully expect to see a wide bit of difference (and, for Skyrim players, perhaps a few common landmarks here and there…?)

I like Rich, he comes across as a player first and a developer second and he gets all excited about the stuff he’s talking about. He’s up for a laugh too which not all developers are.

Betawatch: Temtem plans for this year and the next