Once more, we begin this adventure in EVE Online with some self-owning. For an embarrassingly long amount of time, I was incapable of working out why I couldn’t get to the station that held the career NPCs like I was asked to do by the polls. It literally took me about a day to realize what I had done wrong.

END_OF_DOCUMENT_TOKEN_TO_BE_REPLACED
Apparently, I had at some point selected an option in the autopilot functions to avoid systems where players had been podded recently. This effectively made my navigation system not take me anywhere because presumably pod were being popped all over the place near me. Disengaging the option, however, got me back on the right path and towards what really feels like a necessary step in the new Capsuleer’s progression. 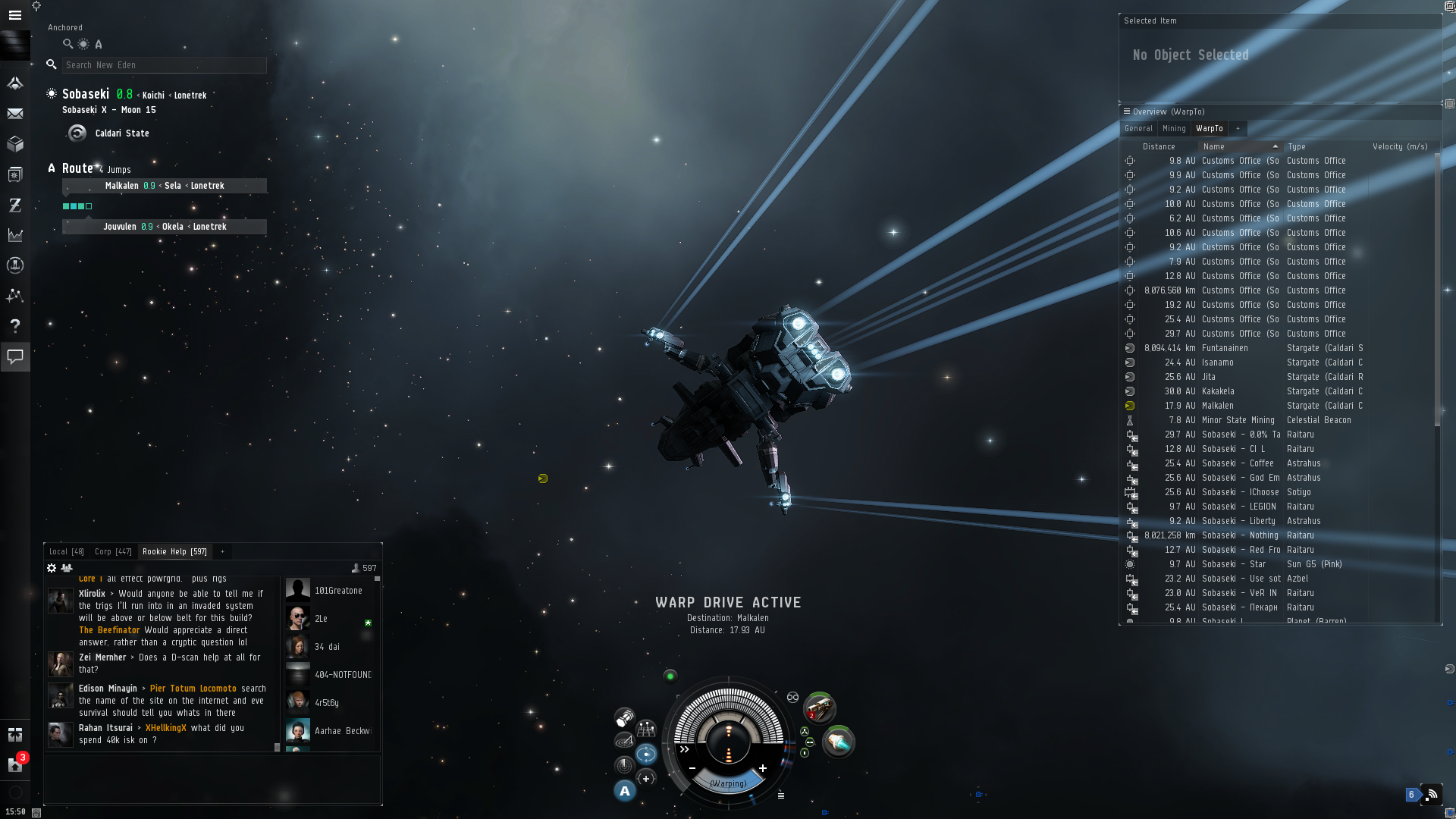 The career NPCs set you on a lineup of 10 different missions which work as part tutorial, part internal narrative. You’re pretty much guided along, but not quite as much as the very opening tutorial moments, as the game presumes you’ve mastered a variety of basic skills. Even so, there were a few things that weren’t immediately obvious at the interim, like when I was given missions that granted me pieces of equipment to fit on to my ship. Doing mining was pretty substandard, but being given specialist items like data analyzers didn’t make sense until I carefully read the actual quest text from the NPC.

No, friends, there is no skipping the dialogue in this game. Particularly when the instructions in the “laundry list” version of the journal doesn’t really give all of the particulars of a given mission.

There were still some stumbling blocks for me here, however, like the time I forgot to put ammunition into my weapons, or the time when an item that I had installed apparently didn’t seem to work, which confounded me enough to go back and forth from the mission area to the starting station three different times until it turned out that the analyzer I was trying to use didn’t work because I was too close to something. A fact, I should mention, that wasn’t brought up in the error message that appeared on-screen — all it told me was that I was using the wrong module. 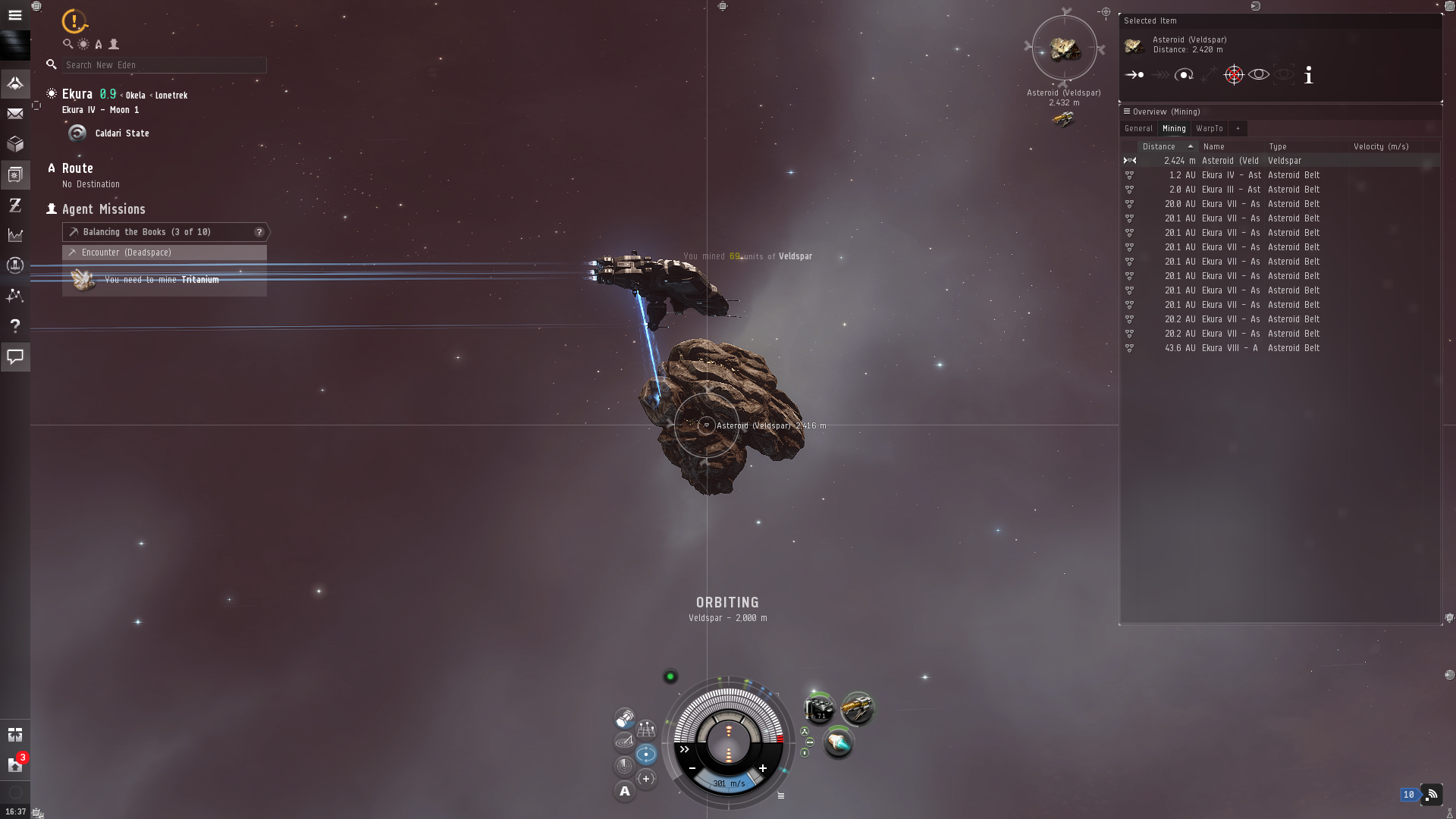 Over time, though, I started to get more familiar with the variety of UI hoops controlling a ship in EVE Online forced me through. Perhaps I’ve played too many games like X-wing vs. TIE Fighter or Wing Commander, but even though I was getting used to clicking all of the various buttons to navigate and fly my ship, it still doesn’t feel good. None of this feels like piloting so much as passively pushing buttons and watching what happens. There’s no sense of fine control, no finesse, and no real agency. Until, of course, I start learning more about advanced maneuvering, particularly in combat.

I guess the one good thing about playing as an internet starship in this game is I could eat nachos and watch YouTube while the game effectively played itself in some situations.

I suppose it’s less a problem with EVE and more a problem of PvE in EVE. The fights, while naval, always feel unengaging, particularly when all I have to do in order to win firefights is hit three buttons and watch things unfold. I’m not expecting or asking for a great challenge here, especially since it’s pretty easy to get overpowered without knowing anything about enemy strength, but being on the other side of the equation was less engaging and more about just getting tasks done. It’s not fun.

Also the amount of UI elements to do things is ridiculous. Pictured below is an image that shows the number of windows I wanted to have open to ensure I could purchase something. That’s not engaging design to me, that’s UI clutter. 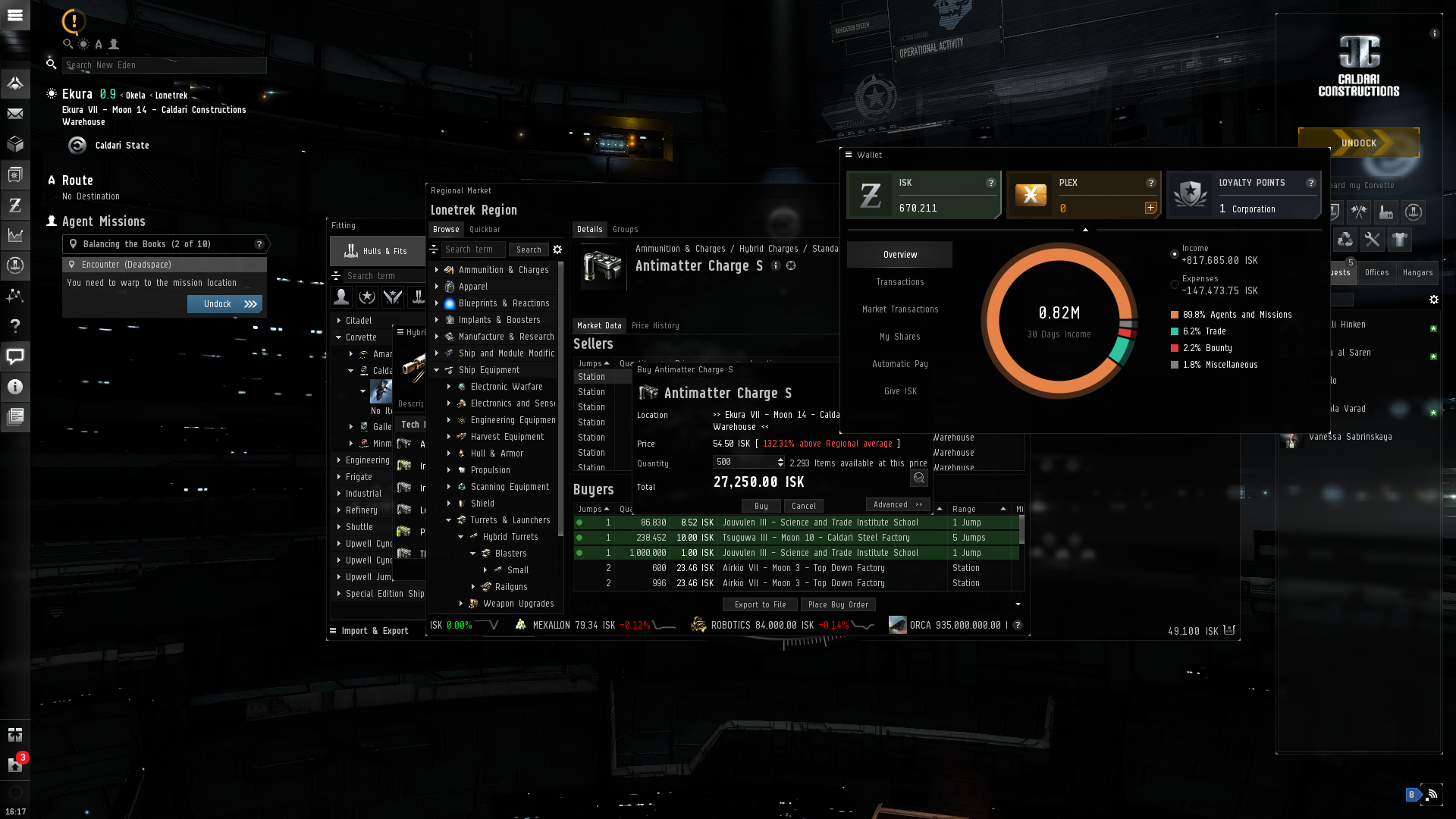 It’s not all misery and bad news, however. As I mentioned, I am starting to slice my way through the dense jungle that is EVE Online’s UI and know where I need to look for things, and completing the career NPC missions is starting to reward me with new ships including a neat mining ship, a sweet space truck, and a goofy looking combat frigate, so that’s always nice. All the same, though, things are getting pretty here, even if the advice I was given to do all of the career NPCs is good advice. Necessary advice, even. In fact, I’d go so far to say that this should be part of the base tutorial.

But I digress. I’ve got one more week of this game in me and I’m going to try to see it through the best I can. So that means there are a couple of polls to open up.

Now that I’m working along all of the career NPC tracks and getting some stuff out of it, including ships, weapons, and money, I feel like I can once more push on with what I was doing before in terms of running missions. Or, I could focus on one of the more passive and relaxed aspects of the game like mining and industry. Or, I could 100% keep cutting through all of the mission NPC stuff to really get the full experience. That’s poll one.

What should happen next in my EVE Online playthrough?

Next poll is about my character specifically. It occurs to me that I’ve got gobs of skill points sitting in my pocket, and while I am burning a few to unlock tier IV of spaceship control, I’m curious on thoughts on where the remainder of my pile of points should go. I appreciate that this poll kind of holds hands with the previous one, but I also think there’s some overlap here or perhaps some shared point trees that I’m not considering in specialization. So, effectively, I’m asking for some advice here.

What should I spend my points on? 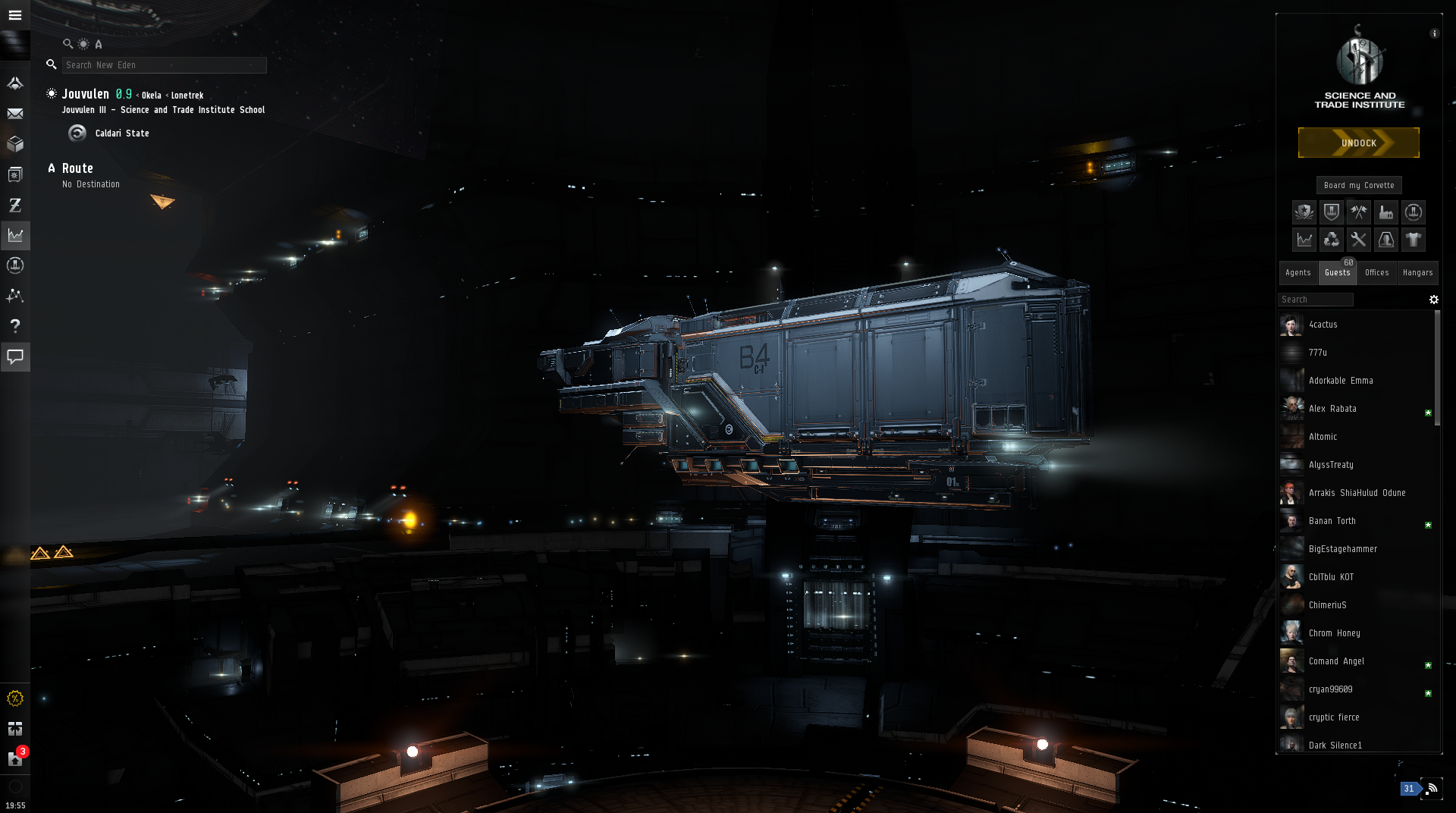 As usual, polling wraps at 1:00 p.m. EDT on Friday, June 19th. For the time being, I am going to find something else space game related to do.

Join pandemic horde and go to null. Join the war effort VS evil goonswarm. Flying in a 500 man fleet is pretty damn fun, tooling around staring at lasers shooting space rocks is no fun.

Not sure how much sense it makes to do CMAs on games that you’re not enjoying. Trying out new games should be accompanied by a sense of excitement, adventure, and enthusiasm, not dread like in this case.

I recommend for your next round to choose games that truly make you want to try them.

Ugh, that UI makes me want to cry.

I’m curious if you’ve tried interacting with any of the other players in this massively multiplayer online game. I might suggest that if you want to find out what the game really has to offer in the limited time that you have, you try joining one of the corporations specialized in helping new players (Brave Newbies for example). I would be very curious to hear how this transforms your experience of the game.

^This, don’t waste any more time on the dull as ditchwater PVE, join brave or a faction warfare corp or just a public roam.

This is good advice, I’d keep doing the NPC career missions just to see the generic stuff you can do and because you can finish it all pretty quickly. But joining a corp is the best advice for enjoying this game!

Twitch is a good resource for new players as well, surprisingly. The streamer community for this game ranges from “elite PVP” to new bro help guides, and almost every streamer will gladly answer any questions you ask them in chat and even show you exactly the answer you’re looking for.

One Shots: Rock out in your hideout

The Daily Grind: What do onlookers not understand about your MMO of choice?

The Daily Grind: Which MMO does the creepiest Halloween?

MMO Week in Review: No, LOTRO’s War of Three Peaks is...

The MOP Up: Soulworker fulfills your greatest desire

Destiny 2 provides a peek at changes to weapon types, exotics,...