Ion Hazzikostas has started talking in recent months about how World of Warcraft is first and foremost a roleplaying game. It seems as if he actually means it ,too. More customization has been a big selling point of this expansion; Blizzard has really been pushing character customization for all the races, ability customization through soulbinds and conduits.

We’ll see how long the soulbind and conduits last, given Blizzard’s “develop and dump” methodology when it comes to expansion features. But the customization talk had me thinking not about how customizable WoW is but how much it’s still going to be missing when we compare it to contemporary games. The rest of the big four MMORPG all have character customization far beyond what WoW offers.

Given that Hazzikostas and friends are (belatedly?) realizing that character customization is so very important to the types of people who play in this genre, I thought I would take a look at some of what I would want to see in terms of customization in Shadowlands and beyond. 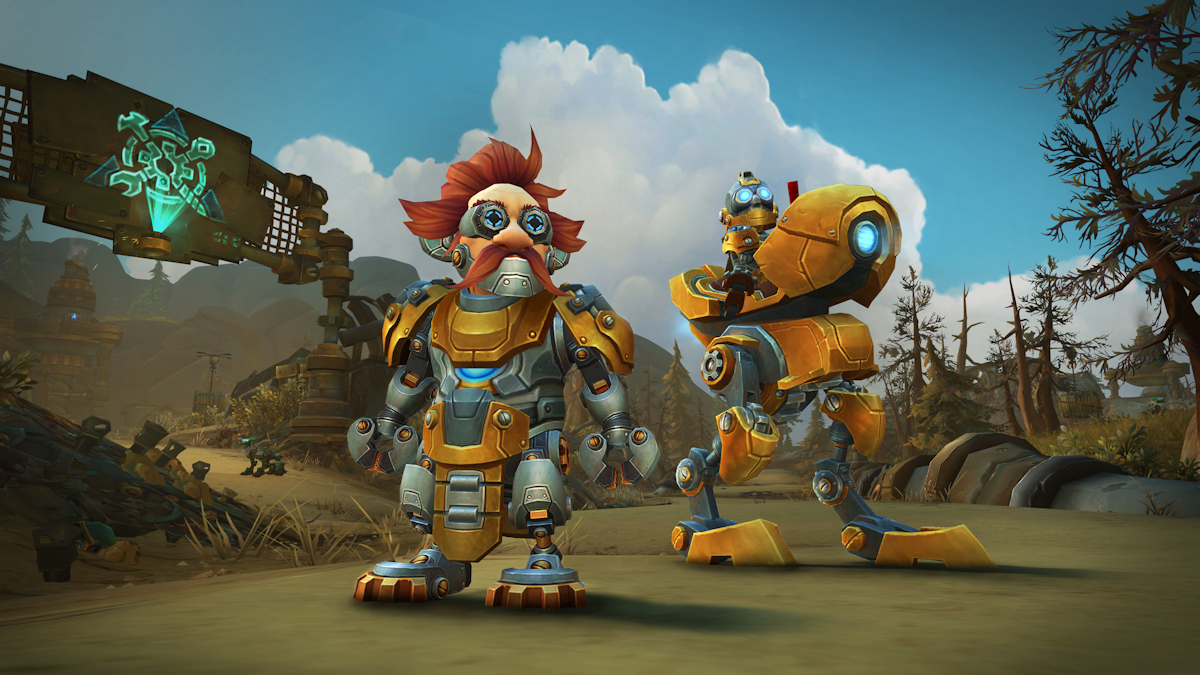 As an RPG, WoW should have character customization out the wazoo. It is what makes an RPG different than something like Doom. In Doom you can use different weapons to lightly adapt your gameplay, but there’s no real customization to speak of. Customization helps build stickiness and helps keep players engaged and drawn into the game. We get more attached to our characters the more we can make them match our vision for what we want them to be. Players are unlikely to make decisions on which game to play solely on how much you can customize characters, but it’s definitely a factor.

Sometimes I’ll flit back to a particular game for no other reason than that I love my characters in that game. Guild Wars 2 is like that for me. Lettuce Elves (aka Sylvari) are my favorite fantasy race ever. I will go back knowing that the game at large won’t hold my attention because I just want to play my Sylvari.

Yet despite the relatively lower effort to implement more customization and the added stickiness, WoW is still bringing up the rear of the pack by a large margin when it comes to cosmetic character customization. When you play as many different games as I do, it’s always jarring to come back to character creation in WoW for how incredibly limiting it it. It seems like Blizzard has now started to realize this in recent years, as it’s started to dedicate engineering time to adding more customization in Shadowlands.

It’s absolutely a good step in the right direction, and it needs to keep going. I don’t think that WoW needs a character creator like The Elder Scrolls Online has, and most assuredly not like Black Desert Online‘s — a character creator that is widely praised but I think deserves plenty of criticism. But WoW needs to be more than what it is right now. In post-Shadowlands, the studio need to continue adding more. Blizzard needs to decouple all the different customizable parts. My Void Elf should have more facial customizations than “round cherubic face” and “slightly desiccated corpse.” My face choice for Blood Elves and Night Elves shouldn’t impact what eye color I have. If my Worgen wants racing stripes, I should be able to add those to any fur color.

Blizzard will never achieve the most robust character creator in the world, but it can catch back up to the baseline that the broader industry has set.

There’s also something to be said for silly race-class restrictions and how those don’t now, nor have they ever, made sense. But Eliot spent a whole column on that topic that you should definitely check out. 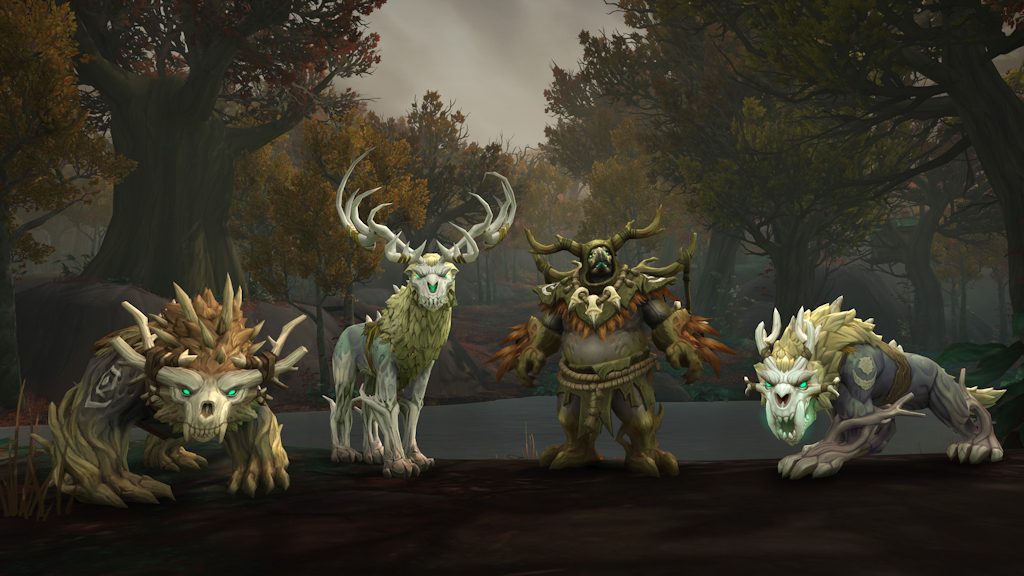 Beyond just straight-up character customization, the studio could really expand the glyph system to allow for more ability customization. Do you want your mage’s fireballs have pink pigtails billowing out behind her? You should be able to do that. Do you want your outlaw rogue to yell “Ya’rrr me mateys!” every time you get a honorable kill instead of the wordless kiai you have now? Those are silly examples, but we already have the proof of concept of ability customization with scribe glyphs. The glyph system is really well-designed (ignoring the glyphs locked behind high-end raids), and I really like the player interdependency that it creates. I just think that WoW needs more.

Blizzard has made moves in the right direction with the glyph system, but it just seems unwilling to commit to doing anything meaningful with it. The system is there, it works, it’s fun, and players love glyphs if auction house prices are any indication. The company just needs to spend the effort to do more.

I will also say that the Soulbind system with conduits also seems to functionally customize your abilities. This is also good! I love the idea of Blizzard finding ways to make theorycrafting less mandatory for the average players without sapping all player agency from the game. We don’t know how the system is going to work in practice yet, but I like the concept.

This expansion hype cycle, I’ve heard more about how to customize your character and less about raids than any other WoW expansion in recent memory, and I can’t see that as anything other than good.
One of my favorite aspects of games like ESO, GW2, and late Wildstar is the dye system. I loved being able to futz with the different color channels on the armor I picked up to match whatever color combination I was feeling at the moment. I think a dye system like that would be a game changer, but since most of the armor design in WoW is visually busier than a Jackson Pollock painting, a more reasonable expectation would be something similar to FFXIV’s dye system, where a single dye changes the color palette of the entire piece of gear.

I’m not as much of a fan of something like that; I prefer being able to customize different aspects of my gear. But the realist in me recognizes that if WoW were to ever implement a dye system, it’s more likely to be the latter. Regardless, something is better than nothing. There are many pieces of gear in WoW that I would love to use for transmog — I love the design but hate colors. Giving me options to be able to customize that would be so very welcome. 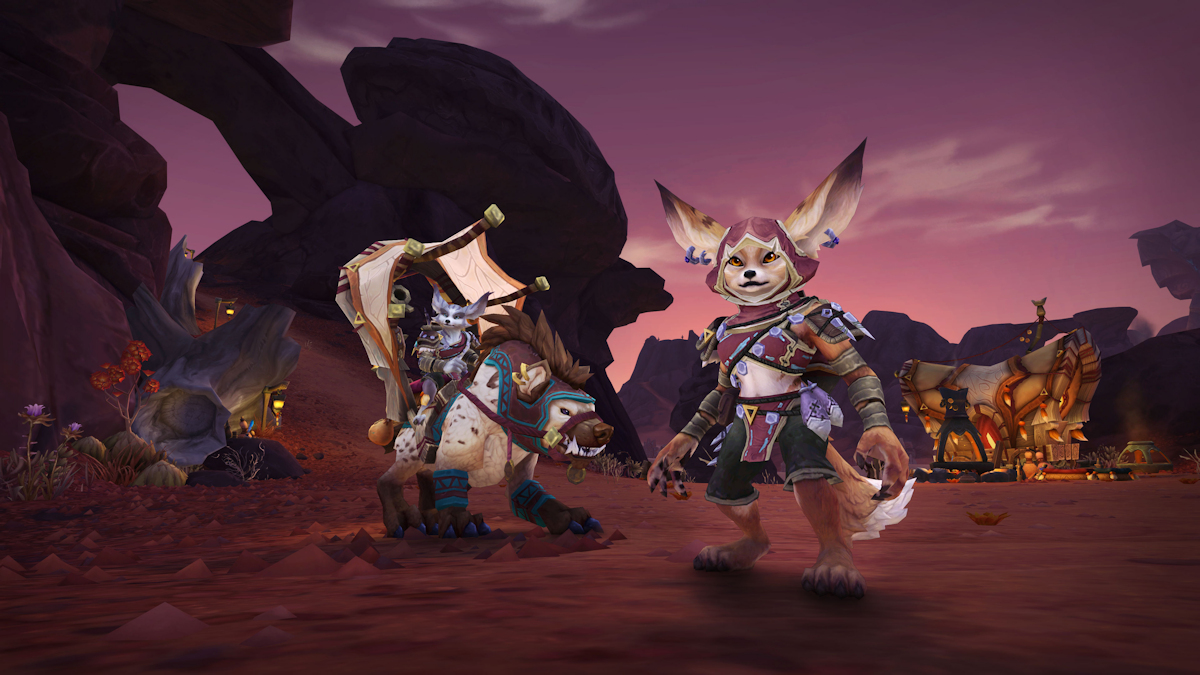 You know what makes zero sense to me? Twenty-someaught years of war in Azeroth but the battle lines are still drawn across racial lines instead of ideological ones. This has quite honestly always been problematic in the game, but the events of the recent months have made it exceptionally problematic. In short, any race should be able to be part of either faction. It’s time to make this a reality.

The factions should still exist, though. The Horde and the Alliance approach situations from very different perspectives, and the ideological differences between the two make sense. The Horde has always been populated by misfits and the Alliance by the cool kids. What doesn’t make sense anymore is that there are no orcs who think the Alliance is better than the Horde, or that the entirety of the Alliance is so toxic and xenophobic that they wouldn’t accept a Horde-raced character — and vice versa. The strict racial segregation in WoW is nonsensical both from a meta-perspective and within the game itself.

What I would love to see happen is two-fold: first, that Blizzard decouples the race choice from the faction choice, and second, that Blizzard finds a narrative-driven way to maintain faction identify and pride while allowing the factions to play together. During the run-up to Battle for Azeroth, I thought that was the logical conclusion to Warmode. The war is over for the main factions and they can start peacefully coexisting (aka playing together), while having those people who were in Warmode still having the faction warfare. But that didn’t happen, or at least hasn’t happened yet.

There are inklings throughout BFA that Blizzard might finally be dropping the Horde vs. Alliance as a constant conflict, but who knows? The BFA narrative cycle has pretty epically missed the mark in implementation. I fully believe that Blizzard had a wonderful, compelling story to tell that it just completely missed the mark on. I hope that all the contradictory messaging about the future of the Horde-Alliance conflict is actually Blizzard setting up to finally let it drop, but it’ll be while before we know.

Also, my guild is Alliance and I really, really, really want to play my vulpera with my guild, and it feels real bad to not be able to.

The future of WoW

I don’t know exactly what patch 10.0 will bring us, but Blizzard remembering that WoW is an RPG is a promising development. I don’t know if it’ll keep going down this path of allowing us to really customize our characters, but I hope it does. This expansion hype cycle, I’ve heard more about how to customize your character and less about raids than any other WoW expansion in recent memory, and I can’t see that as anything other than good.

The Lost Ark Destroyer’s weapon isn’t a warhammer – it’s a...