Still cleaning out your pokemon collections, trainers? I know I still need to! Pokemon Go’s recent Go Fest 2021 was a return to form for the event. While some people may have preferred the 2020 version, the 2021 version felt incredibly generous in both the low cost and high amount of content without completely overwhelming players (even if some occasionally experienced decision paralysis).

While nothing is perfect and players who solely rely on local groups were at a disadvantage, this Go Fest highlighted both what the company’s really improved upon during COVID and what it needs to remember going forward.

Choices of the day

For those who didn’t play, just know that Go Fest Day 1 was all about catching. Yes, there was also a quest to choose different hat/costume Pokemon that was pretty cute, but there were also some popular and useful pokemon spawning in batches around the clock. The order wasn’t quite what we expected, but it was more than fine.

The fact that it was split into a two-day event immediately reminded me of why I preferred it to the Kanto Event. While my friend was admittedly paralyzed with indecision about what to catch, it didn’t feel as stressful for me at all. It also largely didn’t feel as if we missed out on anything. There were pokemon I wanted more of, but knowing there was a Day 2 made it a lot easier for me to relax. Compared to the Kanto event, during which my casual friend felt stressed and overwhelmed to the point of resignation sometimes, Go Fest was more fun than poke-work.

While the Kanto event also demanded choices be made, those choices felt heavier. Each version locked you into a set of pokemon, and the pressure to get shinies of all your version’s pokemon to trade with friends wasn’t fun. Go Fest 2021 let us choose three pokemon, and most weren’t really meta-defining pokemon. While Gardevoir certainly felt like the most useful choice, simply having a hat didn’t make it a make-or-break choice. Yes, there were shiny versions, but since the pokemon were fairly rare, none of my friends who participated felt especially pressured to get a shiny for themselves and to trade. It probably also helped that Niantic didn’t advertise shinies of the version exclusives like it did with the Kanto ones. It would be nice if the hat versions could evolve like in the old days, but you can’t win ’em all.

The one hiccup with Day 1 was with the regional Lake Trio bosses. As these pokemon aren’t useful at all, very few people tried to raid them. They also require either out-of-the-country friends or Discord groups to get, plus people actually willing to raid them in their local area. However, they’re “Dex Fillers.” You know when you’re on the 4th raid tier but some people want to do the very first tier for something dumb nearly no one else wants? That’s what the Lake Trio are, except it costs about a dollar to do them. Yes, Niantic provides this virtual dollar, but when you have a choice between doing tier 1 and tier 4, very few people will do the former, and even if they do, they’ll do it only once. One person I knew was up until 3 a.m. for this!

A related issue was that we missed a lot of raid invites while trading. Niantic has raid invites waiting behind other UI screens, so if you’re, say, sending gifts or trading with friends, you can’t see whether someone in Japan is trying to get you to help with a Mewtwo raid. That costs people time and Niantic potential money.

Weirdly, one nice thing was that Day 1 also didn’t have a ton of desirable pokemon. Yes, maybe some people wanted shiny regionals or shiny hat pokemon and didn’t get them, but they mostly felt like fun pokemon. Having some final forms that gave larger quantities of XL candy was great, but again, the idea that we had the second day coming also made us hungry for more. We did have some people drop out of our Go Fest raiding plans, which worried us a bit, but as we were able to field groups that day without needing our Discord groups, we figured we’d be OK.

There was a Chicago-only event as part of the festivities, but in not being there, I don’t feel as if I missed out on much beyond a temptation to gather with strangers, which I don’t need in my life right now anyway (hello, pandemic). I’m sure the optics were good for the company, but no one I know felt like we missed out on much, which is how the in-person Go Fests really should be. No one I know misses the in-person exclusives of the old fests. 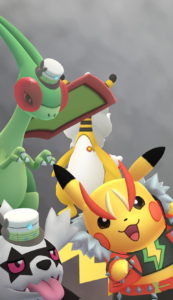 If Day 1 was about walking and collecting pokemon, Day 2 was a mad dash to do as much raiding as possible. I saw two local surveys that asked players which day they preferred, and Day 1 was often the clear winner by a large margin. Part of this, I think was down to COVID still being a thing, as many people did the event from home, but Day 2 was also much hotter in my area.

It could have also been the time limits. Originally, I had thought raids would last 30-40 minutes, as last year’s 25 minutes felt a bit short. Instead, raids lasted 20 minutes, with only a 4-minute warning, I believe. As the raid pools were quite large, this already meant we were trying to play in an area with many gyms in a small area, but when many gyms were about 5 minutes to walk to and maybe 5 minutes prep time, plus 5 minutes just for the battle (with catching taking sometimes more than 5 more minutes), the walking game felt far too limiting.

On the one hand, I play Pokemon Go as walking motivation. Driving around to play the game clearly defeats that purpose. However, I also play it to socialize. It was certainly easier to sit in the car on a hot day scouting things out, driving a block or two, and raiding as people chatted or sang along with whatever was on the radio (though my dog friend did whine a lot about the lack of territory-marking opportunities).

Having desirable legendary pokemon back was fun, even if they didn’t have their best moves. And though my personal collection is fairly strong, there were many pokemon I wanted to catch just for XL Candy ammo. I also didn’t mind doing a raid or two to help friends. But I’m also fortunate, as I have a global variety of active friends and am part of a few very active Discords – not everyone will be in that same position. The time limit did mean we had some very close calls, but we didn’t fail a single raid. Some pokemon got away, but that’s part of the game.

The raid day was a strong reminder of how important our online communities have become. While there were people raiding in my community, many people were in cars as well. It felt safer and faster, and because the time limits were so short – as were the warnings of raids to come – I cannot even imagine trying to lead a large group with varying tastes around a few blocks chasing the raids people want. Small, agile groups supported by online communities felt best to me, both as someone in a group and as someone who occasionally assisted a group as a PUG member.

It also highlighted how important the interaction radius increase is, despite Niantic wanting to take it away soon. That larger radius helped us stay away from people when we did leave the car, but it also let people spread out in their cars so other people not playing the game wouldn’t be inconvenienced. Had Niantic rolled the gym radius back, I know several spots in town where people would have illegally parked like they used to, which has caused problems more times than I can count.

Go Fest 2021 was a great experience. It feels much better when Niantic runs it as a virtual event instead of a local ticketed event that rewards affluent people who can take time off to snipe tickets. The COVID changes helped make the event much more playable, and the team’s generous amount of Remote Raid Passes was a big improvement. I do still feel I was rewarded more for going out, but perhaps Niantic had set the limit to encourage driving in small groups, which really did feel relatively safe.

At the same time, I do worry that this could be the last great GO Fest. What happens if Niantic does roll back the Gym interaction distance? What about if remote raiders really do get their damage nerfed? What if Go Fest goes back to being a localized, real-life event again? My fear is that Niantic far too often plays with damaging its own community in search of how much pain they can inflict in their search for profits. One need not look farther than the coin system revamp or Mega Evolution to see that the company will twist the screws for months before really hearing the players out.

I feel we may be in for a similar ride soon, but in terms of Go Fest, I hope the studio doesn’t play with the format too much. Tweaks are one thing. The new quest system was great, and the pokemon selection was fun. But what I don’t want to see is more highly exclusive content that divides the community. Giving us choices and time to plan is best, and Go Fest 2021 did that quite well.