I admit I debated whether I should write this column at all: After all that’s happened lately, giving coverage to Blizzard games doesn’t feel quite right. But for better or for worse, it is still a big name, and its games are still big news. ARPGs are on of the chief genres covered by the Not So Massively column, and Diablo is the single most important franchise in that genre.

So let’s talk about Diablo II: Resurrected, which I had a chance to try during the recent open beta event.

Before we start, I should state my own personal biases. My long love of Blizzard games might make me judge the company less harshly than most; I still think there are and have been lots of good people working on their games, and that legacy can’t be entirely erased by the actions of the bad actors. But even I find my opinion of the company at an all-time low, and I’m not much in the mood to praise it right now, so that may negatively impact my view of D2: Resurrected.

It’s also worth noting, as I have in the past, that despite my love of ARPGs and Blizzard games, I was never a big Diablo II fan. I enjoy its story and setting, but the gameplay always felt shallow and clunky to me. So take that into account as well: I’m not starting out here as a Diablo II superfan.

In a perfect world, a video game remaster should satisfy the long time fans while modernizing enough to bring in new players. Personally I would love a game that gives me the moody feel of D2 with smoother, deeper gameplay, and I had held some hope that Resurrected might achieve that.

That hope was not fulfilled.

Simply put, this is just Diablo II with better graphics. Nothing more. What tweaks have been made beyond the visuals are so minor as to be scarcely worth mentioning. 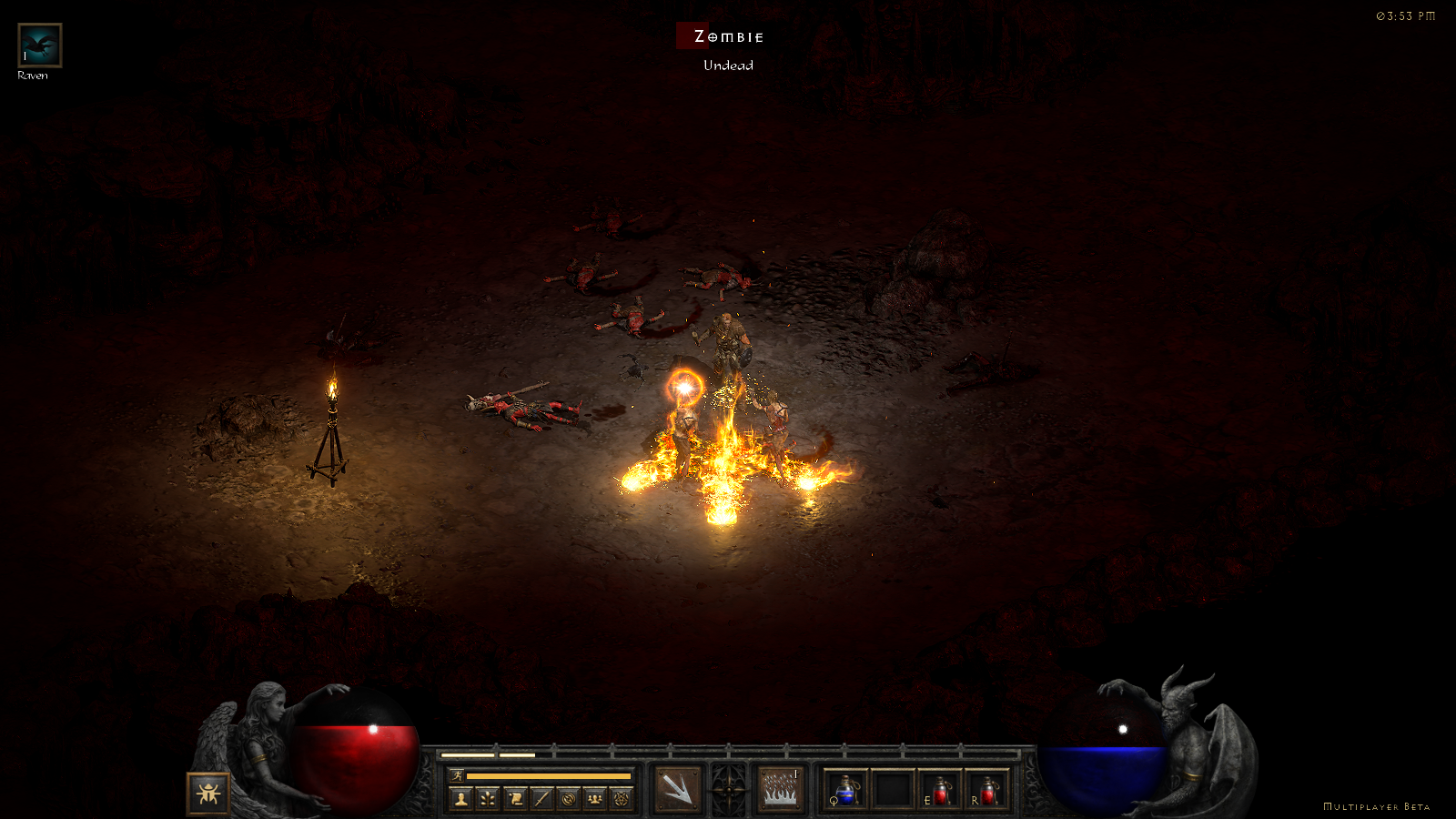 The visual updates are great — I’ll give it that. It’s very recognizable as Diablo II and yet light years ahead of the original in visual fidelity. The character animations are still a bit stiff (an engine limitation, I assume), but the textures and monster models are incredibly detailed. The dynamic lighting, meanwhile, is superb, especially when playing a magical class. Dark caves briefly explode with light with every fire spell cast. It’s fantastic.

The remastered cinematics are also impeccable. You can see the lingering horror in every shifty movement of Marius’ eyes.

The sound hasn’t changed much, but that’s all to the better. If there’s one thing I’ve always unequivocally loved about Diablo II, it’s the sound design. From the evocative sound effects to the brooding music and distinctive character voices, it’s easily one of the best-sounding games I’ve ever played.

But when it comes to the gameplay, Resurrected leaves me cold. Virtually nothing has changed compared to the original, and while that may be good news to some, for my taste there are some aspects of the game that badly needed updating.

Most notable of this is the limited key-bindings for skills. You can bind skills only to the left and right mouse buttons, so pretty much the whole game just boils to spamming one button most if not all of the time. There’s a system to quick swap between different skills using hotkeys, but it feels very clunky.

For my money, this game really needed to be updated with a full action bar. Yes, a change that big would have necessitated some rebalancing, but I think it’s the bare minimum necessary to modernize the gameplay. 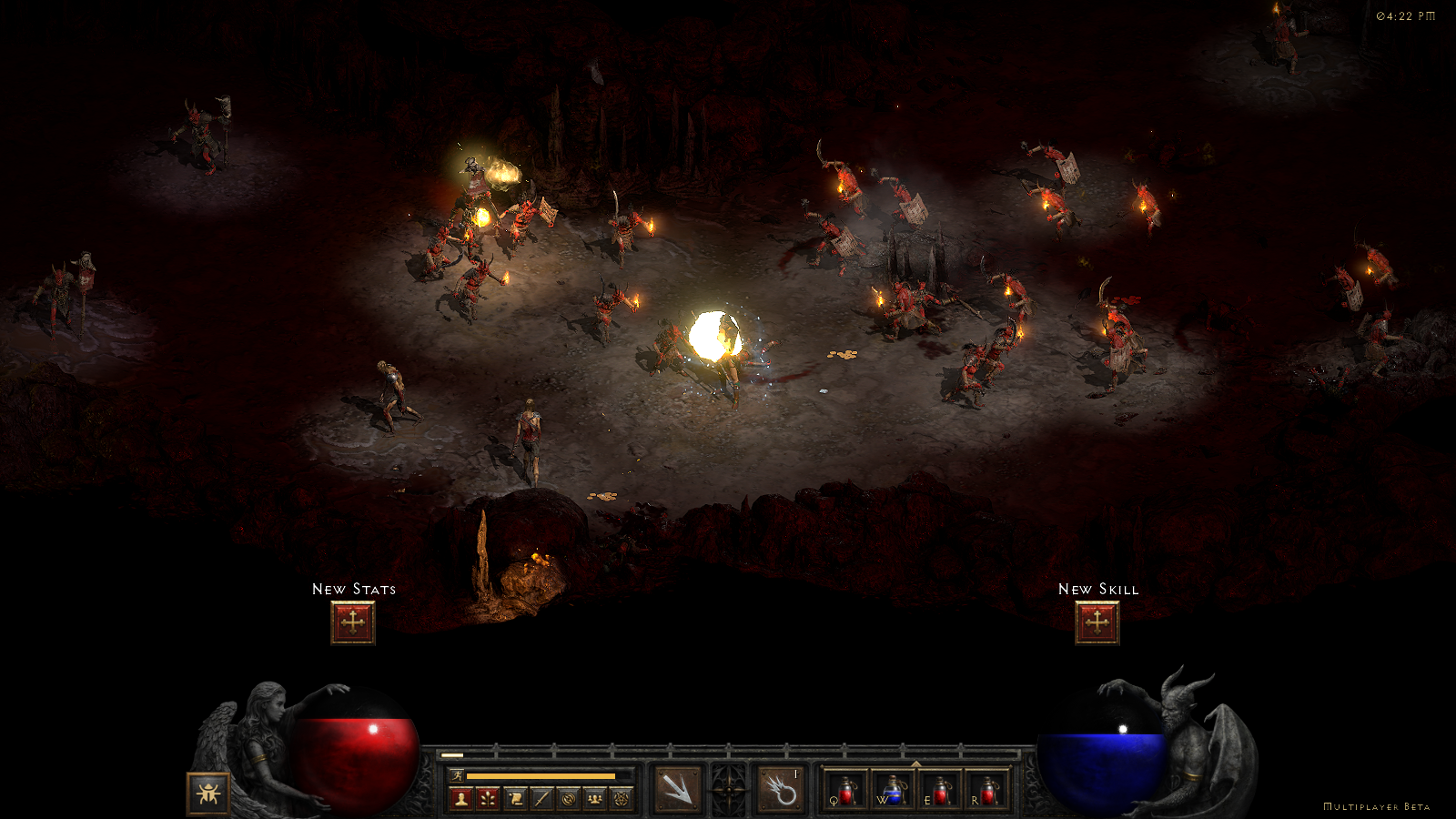 Another mechanic I was disappointed to see return is stamina, a resource that depletes as your character runs, eventually forcing you to slow to a walk.

If you haven’t encountered this firsthand, it might not sound so bad. Most games these days have a sprint feature, and it’s pretty common for sprint to be resource-limited. But those games usually have three speeds: walk, run, and sprint. If they leave one out, it’s the walk speed. But Diablo II doesn’t have a sprint speed. Stamina limits your run speed, meaning when it runs out, you’re reduced to walking at a very slow pace.

I genuinely don’t understand why this mechanic ever existed in the first place, let alone why Blizzard kept it for Resurrected. The only thing I can think of is limiting kiting on ranged classes, but… why? That’s skillful play; it should be rewarded, not punished. At any rate in practice mostly all stamina accomplishes is to make travel miserable.

However, much as I dislike both stamina and the limited hotkeys, they are pretty core to the Diablo II experience. While I believe they should have been changed, you can make an authenticity argument for them. What’s harder to justify is the lack of other quality-of-life improvements.

For example, inventory space is still severely limited, and I just don’t see a need for this. Even at low levels, scrolls of town portal are easy enough to acquire. There’s no gameplay tension or interesting decisions to be made because of the limited inventory. It’s just inconvenience for inconvenience’s sake. 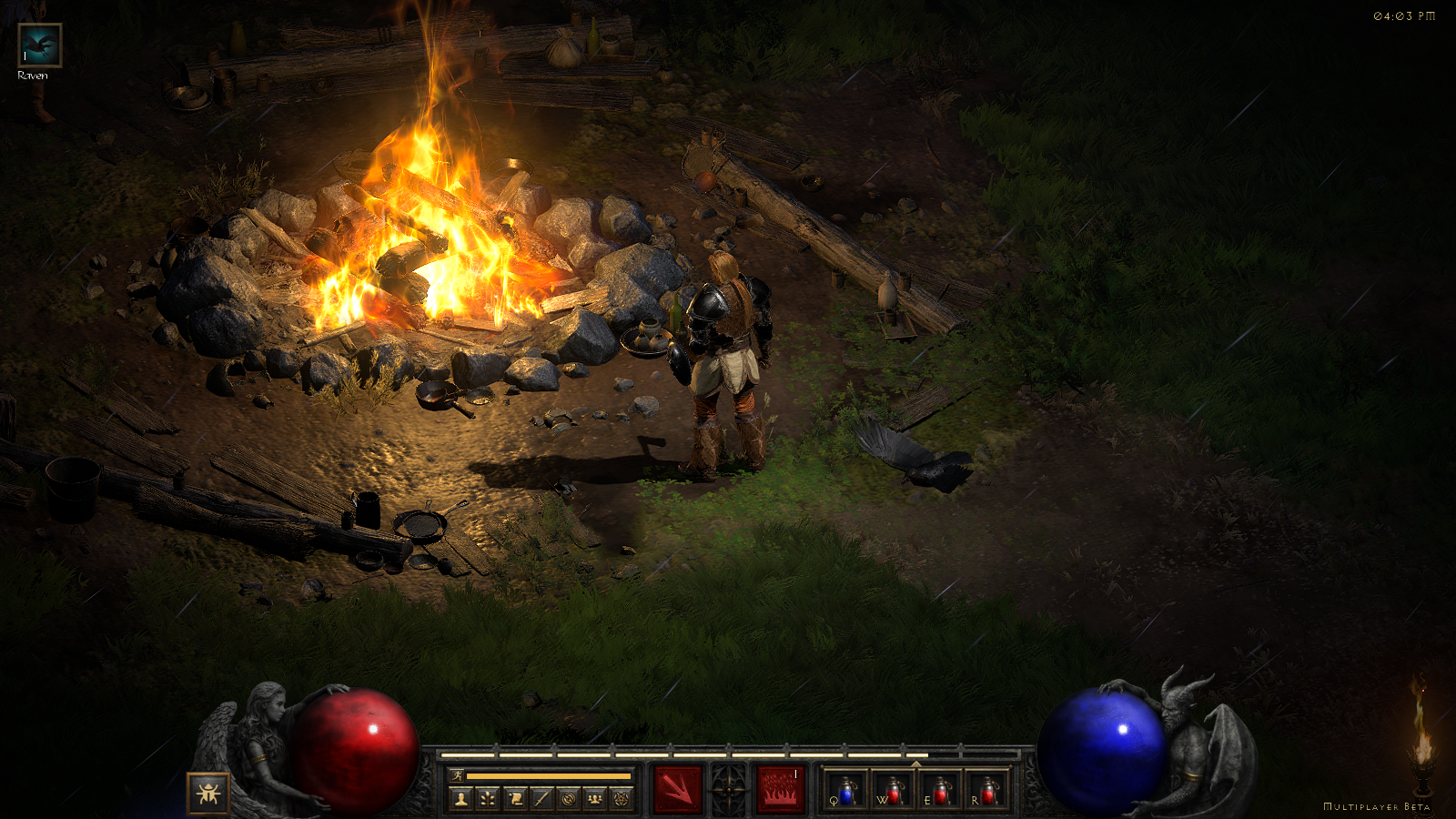 Resurrected is lacking many other simple modern conveniences that should be a no-brainer for a remaster like this, such as buff duration tracking, double clicking to equip or sell items, and custom key-bindings.

In fact just about the only gameplay tweak is that you can now pick up gold simply by running over it, and even then the radius for gold pick-up seems smaller than it needs to be.

If you’re a die-hard fan of Diablo II and all you wanted was the same game with shinier graphics… yeah, this is that. If you wanted anything more from Resurrected, you’ll be disappointed, and if you’re someone who never played the original, I’d honestly be more inclined to recommend the fan-made Reign of Terror mod for Grim Dawn. It has some issues of its own, but in my view it does a better job of balancing Diablo II faithfulness with refreshed gameplay. And you won’t have to deal with the moral quandary of supporting Blizzard in the current climate.

The world of online gaming is changing. As the gray area between single-player and MMO becomes ever wider, Massively OP’s Tyler Edwards delves into this new and expanding frontier biweekly in Not So Massively, our column on battle royales, OARPGs, looter-shooters, and other multiplayer online titles that aren’t quite MMORPGs.
Activision-Blizzard is considered a controversial company in the MMO and gaming space owing to a long string of scandals over the last few years, including the Blitzchung boycott, mass layoffs, labor disputes, and executive pay fiasco. Most recently, the company was sued by the state of California for fostering a work environment riddled with sexual harassment and discrimination, the disastrous corporate response to which has further compounded Blizzard’s ongoing pipeline issues and the widespread perception that its online games are in decline.
Advertisement