Unlike a lot of ARPG fans, I was never a big player of Diablo II back in the day. I enjoyed the story and the ambiance, but I found the gameplay too simple and too bogged down with unnecessarily irritating mechanics, like stamina. Meanwhile, Grim Dawn is a game where I (mostly) enjoy the mechanics, but I wound up drifting away because the story didn’t grab me.

Recently we covered the Reign of Terror mod that attempts to remake Diablo II in Grim Dawn. Could this be the best of both worlds combo I’ve been looking for? The engaging story of Diablo II with the more palatable mechanics of Grim Dawn? I had to find out.

When judging any kind of remake like this, I think there are two main questions that need to be answered: Is it faithful enough to the original to satisfy diehard fans, and does it modernize things enough to attract new players who never experienced it back in the day?

Let’s start with the first question: Will Reign of Terror satisfy the super fans? I am, as noted, not the biggest fan of D2, but in my estimation, I think the answer is probably yes, though it may depend on the individual.

It does need to be said that this is not a one to one to recreation of Diablo II. That’s not something the technology allows. Great strides have been made to replicate the D2 experience in Grim Dawn, but at the end of the day, you are still playing Grim Dawn.

The biggest change is the build system. The modder behind Reign of Terror has done his level best to recreate the original classes and all of their abilities as faithfully as possible, and he’s done an impressive job, but it is still built on Grim Dawn‘s mechanics. This means you will pick your first class at level 2, and a second at level 10, opening up a realm of build options that never existed in the original. 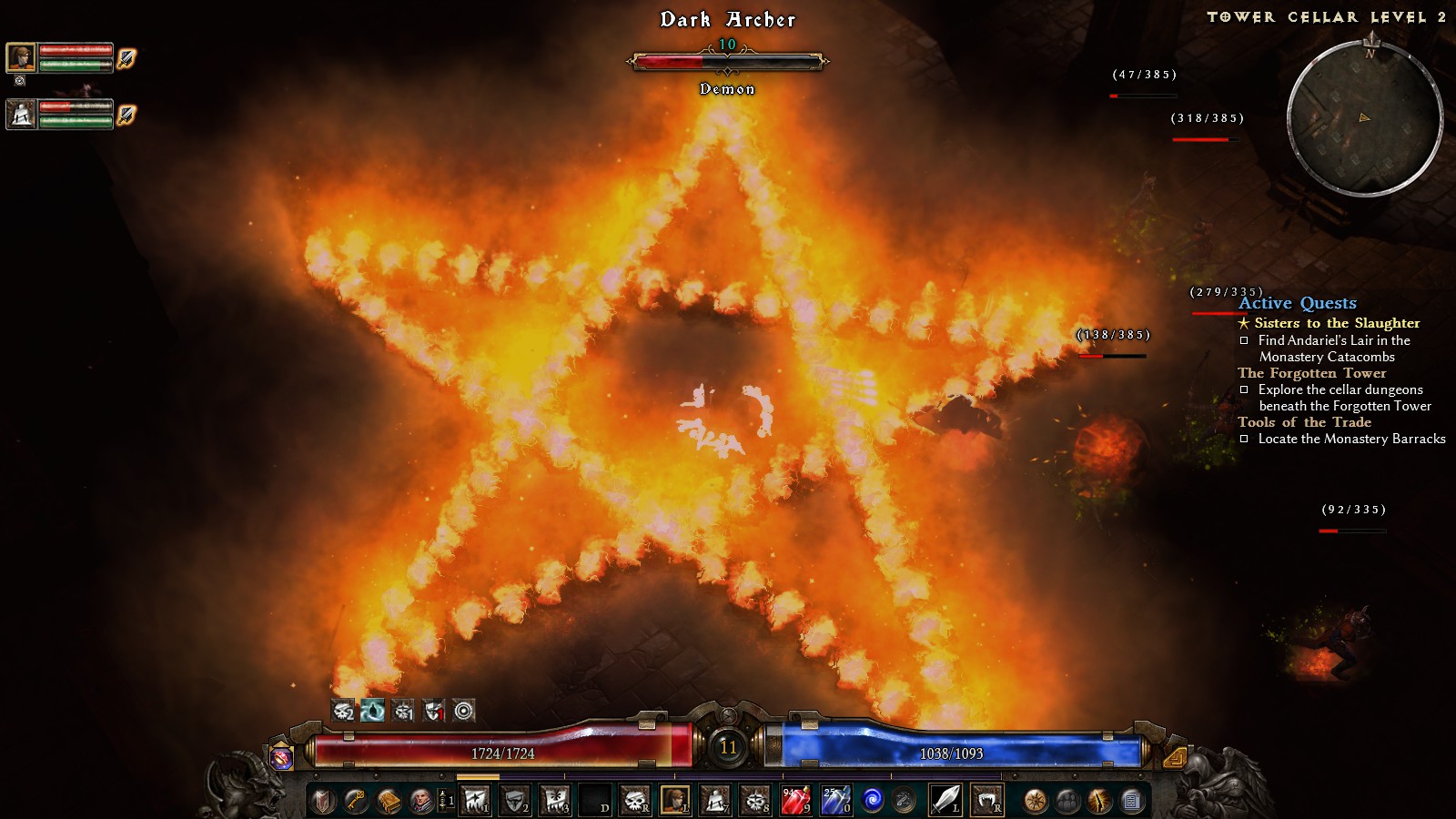 This strikes me as an improvement rather than a detriment, and I think many will feel similarly, but it is a major deviation. Of course, if you really want an old school experience, you can always just not spend any points in a second class.

Grim Dawn‘s own classes are also currently available in the mod, but from what I understand Reign of Terror is not balanced with them in mind, and the intention seems to be to remove them in the final release version of Reign of Terror. In the interest of purism, I decided not to use them.

Grim Dawn‘s Devotion system — a vast web of passive bonuses — is also still in the mod, and since Devotion points have been made into quest rewards, I think it might stick around even in the release version. That said, again, more character customization seems a plus rather than a minus.

Other legacy elements of Grim Dawn are less positive. Right now the loot in Reign of Terror is a mix of standard Grim Dawn items and recreations of D2 loot. Aside from its being immersion-breaking to constantly be getting drops of guns and buzzsaws in a Diablo game, a lot of loot uses stats that have no Diablo II equivalent and therefore see little or no use in D2 classes. It makes finding upgrades even more of an ordeal than it already is in Grim Dawn.

Meanwhile the legacy D2 items don’t always work, either. You can find socketed items right now, but it’s impossible to actually put anything in those sockets. Hopefully all this will be fixed in the release version. 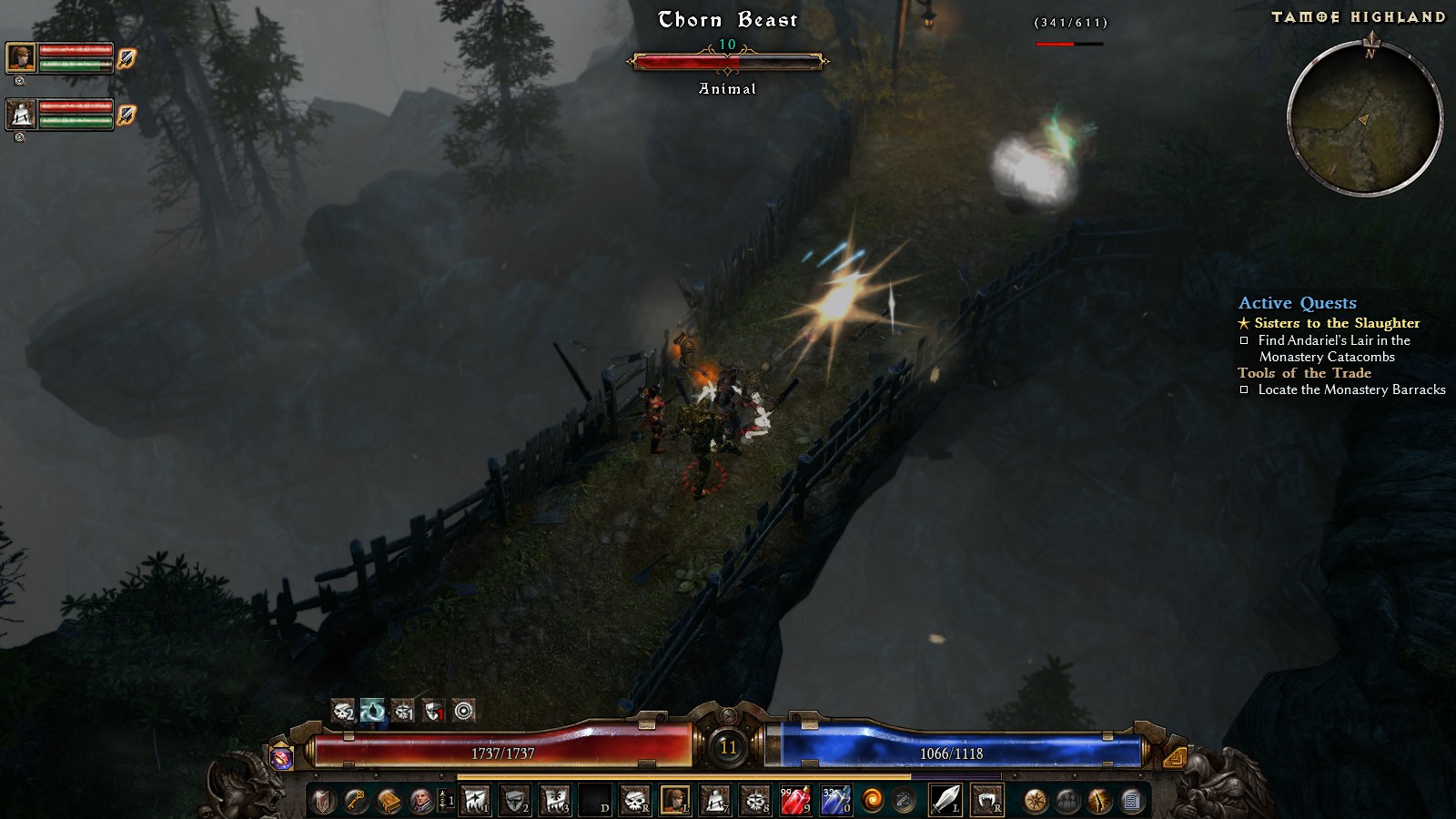 Even all of the original music and sound effects are included. Maybe it’s just nostalgia talking, but sometimes I feel like the sound effects from modern games just aren’t as evocative as what we had back in the day. The monsters sound creepier, and the skills sound more impactful.

Most importantly — at least from my perspective — the eerie, unsettling ambiance of Diablo II is very much intact. Hiccups aside, fundamentally Reign of Terror provides the kind of experience I would want from a Diablo II remake.

As to whether this changes enough to attract people who never played Diablo II in the first place, I’m less sure of that. While using the Grim Dawn engine does a lot to modernize the experience by improving the graphics and getting rid of some of the more irritating mechanics (like stamina), the experience can still end up feeling a little dated.

The biggest issues is the classes. The thing about the old D2 classes is that they… well, they suck. I’m sorry, but it’s true. Back in the day, you could only equip skills to the two mouse buttons, so most classes in Diablo II have little beyond a selection of various nuke skills with no particular synergy with each other. There are no cooldowns, generator/spender mechanics, combos, or rotations.

In Grim Dawn, you have a much larger action bar, but you still don’t have much to fill it with. There’s no point in spreading your skill points thin over half a dozen slightly different spammable attacks. Even having access to two classes at once doesn’t make much difference, and just leaning on the left mouse button every fight isn’t a playstyle that holds up very well today.

There is one exception, though. More by chance than anything, the Necromancer still feels pretty good to play. With its plethora of curses, pets, damage spells, and utility skills, you can create a fully fleshed out toolkit such as you’d see in any modern ARPG. It’s just a shame it’s so much harder to build an enjoyable playstyle with the other classes. 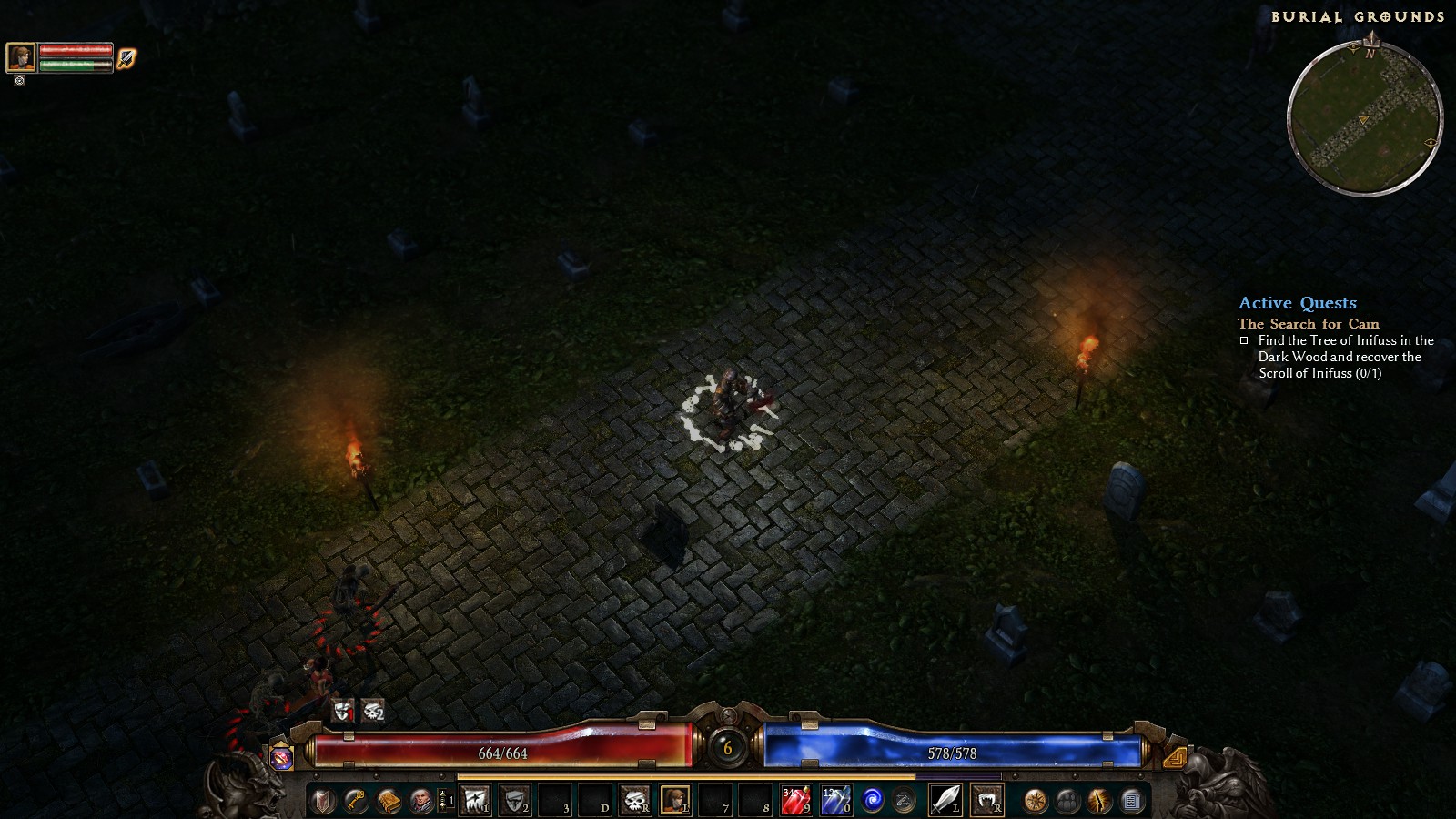 There are some other legacies of old school design that don’t work hold up super well today. The pace of leveling feels a bit slow, for one thing. There’s also the matter of how dark the game is. I don’t mean the tone of story; I mean it’s hard to see what’s going on. I know a lot of old school fans miss the suffocating darkness of yore, and I grant it does make the game scarier, but it also makes it hard to see what’s even going on. It loses its novelty quickly. I have a bright apartment with big windows, and I’ve found the only way Reign of Terror is playable is if I play at night.

It’s not all bad news for the newcomer, though. One nice perk is that Reign of Terror has tweaked the maps slightly to make each zone more visually distinct. No longer does every zone in act one look virtually identical. They all have their own style and character, while still staying somewhat faithful to the original.

The story, sound, and ambiance still hold up, too, and class issues notwithstanding, the core gameplay is as enjoyable as you’d find in a modern ARPG like Grim Dawn.

One tip I would have for anyone coming into this fresh: Don’t be a completionist and feel the need to full clear every map. There aren’t lore collectibles are any other significant reward for going off the beaten path. Just complete your quests and move on with the game. Everything will flow better and feel less grindy that way. So far it hasn’t led to me under-leveling anything, though I suppose that could change as I get farther into the game.

As for me, it took me a while to find my legs in this mod, but now that I’ve settled on a necromancer, gotten a good build going for her, and given up on fully clearing every map, I’m enjoying myself. I never played the expansion for Diablo II, so this seems like a good opportunity to finally experience that story.

It’s not the ideal modernization of Diablo II for my taste, but for now at least I think I’ll press on.