MMO players have been a been preoccupied with the launch of New World over the last two weeks to pay Diablo II Resurrected too much notice, but it launched not even a week before New World, and it’s had significant problems of its own. Readers will recall that Blizzard’s remaster of the old classic rolled out on September 23rd, and though our own reviewer was aglow with love for the new look, the online servers were plagued with issues almost from the start; we saw gamers losing character progress and suffering from character lockouts, multiplayer lobby issues, launch issues, and multiple episodes of downtime.

This past weekend, the servers were once again slammed with problems, as a quick run-down of Blizzard’s NA and EU customer service Twitter accounts can attest to login and connection issues for significant chunks of every day this weekend stretching into this morning. The most recent comments from the studio on Monday morning as I type this suggest that the “investigation into the connection issues continues.” 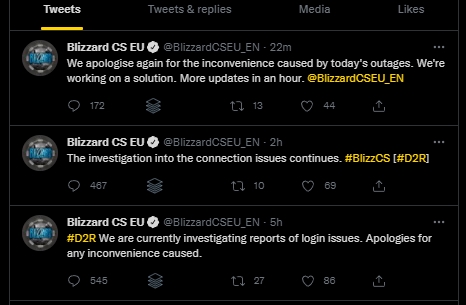 The Diablo and D2R subreddits are often on fire, but that’s especially true right now, as affected players are upset that it’s more than login and connection issues and as players are seeing rollbacks as well. MOP’s own Brendan Drain pointed out that internal game servers are also experiencing issues, hence the rollbacks.

Diablo II Resurrected was expected to be Blizzard’s only major launch in the back half of 2021, though of course the third quarter ended just a few days after the game’s release, so this particular round of messes won’t have an immediate impact, though it’s an unfortunate turn for the game that Blizzard clearly hoped would lift the Warcraft 3: Reforged curse from its remasters.

The outage chart from hell from Diablo_2_Resurrected

The Diablo II Resurrected servers keep going down, and Blizzard calling it "login issues" or "connection issues" is pretty disingenuous.
The internal game servers are going down, causing widespread rollbacks on characters. In a game that's based on loot-finding and trading. #D2R https://t.co/ZFnANGuvTk

Source: Twitter, Reddit
Activision-Blizzard is considered a controversial company in the MMO and gaming space owing to a long string of scandals over the last few years, including the Blitzchung boycott, mass layoffs, labor disputes, and executive pay fiasco. In the summer of 2021, the company was sued by the state of California for fostering a work environment riddled with sexual harassment and discrimination, the disastrous corporate response to which has further compounded Blizzard’s ongoing pipeline issues and the widespread perception that its online games are in decline. As of fall 2021, multiple state and federal agencies are currently investigating the company.
Advertisement