Over the last few weeks, Gamigo has been teasing a new MMORPG on a placeholder website called Uncertain Folder – a game with a gruesome demonic theme. While the studio has yet to actually name the game, it did drop another tease today, and it’s set a community on fire – Fractured’s community.

Fractured, you’ll recall, is an in-development Kickstarted sandbox MMORPG by Dynamight Studios that’s been running intermittent alpha tests all year. In June, the studio announced that it had received an unspecified amount of investment and doubled its team size to focus on finishing the game. Details at the time, however, were sparse.

Now, the Fractured Discord is debating whether their game might actually be Gamigo’s title. Testers have pointed to similar artwork and storytelling as well as a clue in the recent investor report that suggests the new game was an “innovative open world sandbox MMORPG that already has a growing community” and that Gamigo had “acquired the worldwide IP rights for the PC” version as well as a future console version in what was describes as “MGI’s largest licensing deal to date.” Here’s the clip from that report, which we covered last month:

Other players argue that the companies would be a bit of a mismatch and the lore thus far is so generic that it could be anything, which is also true; moreover, Fractured isn’t really in a position where it’s close to launch. For the record, we don’t actually know either way, and Gamigo hasn’t told us since we declined to sign its NDA. But that just makes the speculation more fun!

As for today’s tease, Gamigo’s hinting that we should be digging around inspecting the game’s website for clues. 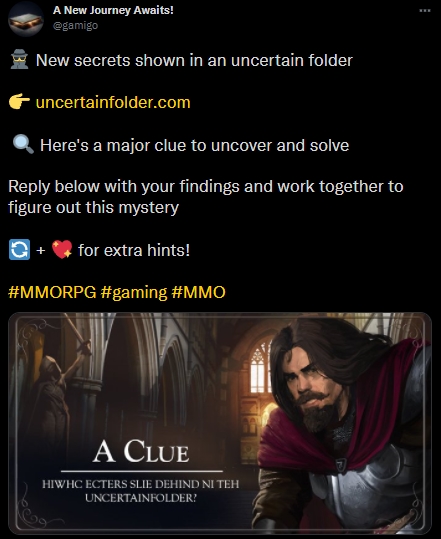