By the time you’re reading this, Fractured Online has already begun its closed beta phase, but before then I was granted the opportunity to digitally sit in with Dynamight Studios CEO Jacopo Gallelli, Gamigo Associate Producer Ashton Thorsen, and Gamigo Executive Producer Westley Connor to discuss the game’s beta build, its overall beta content plans, and features that players can expect now and in the future.

The preview opened up with a rundown of the base features of Fractured that the devs have been keen to showcase in the weeks leading up to this point. There was talk of the game’s open world, its knowledge-based skill system, player-built cities and city management systems, and some of the economic gameplay features that players can expect, all taking place over continents that are about 60 square kilometers in size.

Gallelli was also proud of how players have already started to put together guides and fan resources to help with some of the more involved crafting aspects like imbuing and enchanting. Gallelli notes here that these systems won’t really have any in-game guidance, as he believes that players becoming masters of these facets of the game on their own is a vital part of design.

The preview also made a lot of noise about Fractured’s various skills, discussing how there are entire skills that are meant to work as counters to certain types of abilities or elements, which will be important in PvP and in certain PvE encounters. As a result, Gallelli claimed that there was always a counter to every build.

These points are all well and good, of course, but what most people are interested in is what’s different between the game’s alpha builds and today’s beta. First off, the beta build will have the other two races – Wildfolk and Demons – available for play as well as the already crafted Humans. According to Gallelli, much of the work to bring the Wildfolk and the Demons wasn’t completed at the time of our preview, and when I expressed my concern that the devs might not hit the feature mark, he assured me that the team’s new large size means they’ll be able to put together these two new races in a short amount of time, especially considering how fast the previously smaller team had put together the Human race.

Another major feature arriving to the game’s beta are asteroids – separate open PvP instances that all three races will be able to access on a rotating basis. Getting to these asteroids will not be an easy feat, as they’ll require the crafting of a star gate in order for players to get in. When groups do get on to these asteroids, they can expect a wide variety of existing biomes, control points that open at certain times, and the opportunity to get a relic prize that grants a boon to the controlling player city. Asteroids are expected to be available every few months, with a total of two to three asteroids planned at any given time.

For the PvE player, the beta will introduce underground dungeons that can be found in the open world. That means that dungeons won’t be instanced and will be fully open to anyone, though it was impressed upon me that these locations will be extremely distinct from anywhere else in the game’s world, with significantly higher levels of danger, meaning players will probably want to cooperate if they plan on delving these dungeons. Or at least try to, depending on which race players select.

If you’re the pastoral type, Fractured will have things to do here as well; markets will be localized so players will be able to take up buy orders to craft items and bring them to player towns, and the game’s farming will mirror a lot of the things that real-world farmers have to consider, such as soil yield, what crops to plant at what seasons, and even what crops should be planted in order to nourish soil. 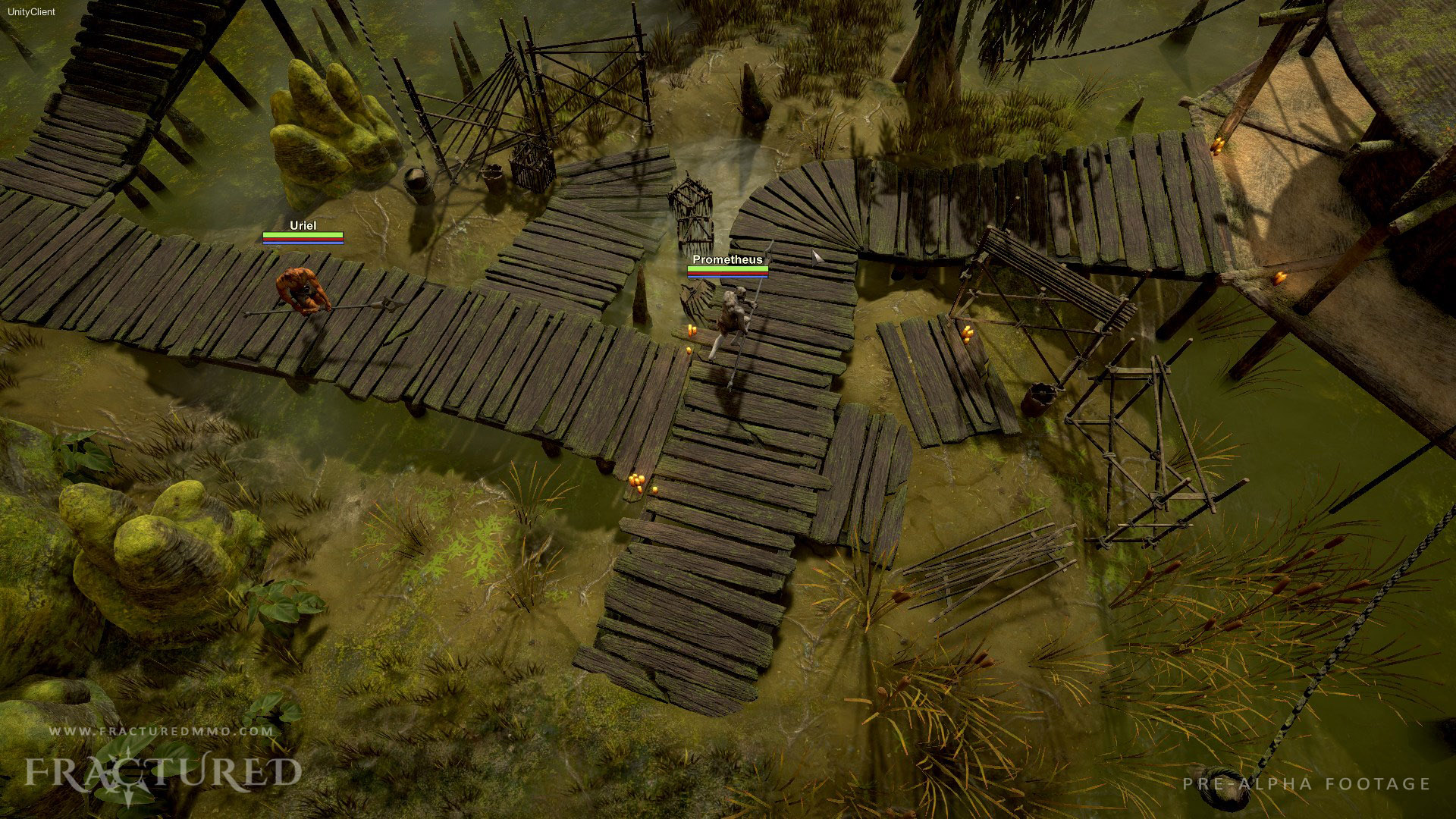 As reported before, Fractued Online’s beta test will run 24/7, with an emphasis on persistence and a lack of wipes. Another surprising point of note is that the game’s beta test does not have any set length of time; the beta will run for as long as the devs at Dynamight Studios deem necessary, though Gallelli expects that the beta will run for a long while. Unfortunately, the closed beta will also be under an NDA, so information about what’s going on behind the closed doors will have to come from the studio itself.

Since it was revealed that Fractured’s beta doesn’t have a timetable, it did cause me to ask Gallelli whether the recent layoffs that occurred at Gamigo had any sort of effect or pressure on the devs at Dynamight. According to him, his team is not feeling any sort of stress on the wider corporate side of things, which does align with the fact that the Fractured team was reportedly wholly unaffected by Gamigo’s headcount shift. (It’s also the first real public acknowledgement out of anyone affiliated with Gamigo about wider layoffs at all.)

Overall, Fractured Online is looking ahead to what it calls a true beta testing process, with focus on getting feedback, reading metrics, and iterating on what players report as well as layering on new features over time. This closed beta round is likely going to take some time for things to get right, but Gallelli appeared confident that the devs will hit their stride and grow the game from here. Time will ultimately tell, but the devs appear to have almost all the time they need to stick the landing.

Choose My Adventure: Going back to Guild Wars 2 basics through...