While I have to admit that my playtime in Lost Ark has waned a bit in light of a bunch of other games capturing my interest, I also have to admit that I’ve been looking forward to the game’s new update for a little while. Naturally, I leaped at the opportunity to check out this update on the game’s test server to try a little bit of the story and a whole lot of the Glaivier class.

I’ll start with the story portion because that, frankly, was the shortest bit of my time in the test server. Admittedly, this is kind of my own doing, as I haven’t been able to get past T2 yet (see the aforementioned other games diverting my interest), and so don’t have a whole lot of context for what’s happening in the area that my boosted press character was plopped in to. I’ve ended up in a particularly lovely tropical island as a start, and there were a few quests that I took up to sort of get my bearings for the character I was given – a Striker to be precise, but I wasn’t able to get extremely far. 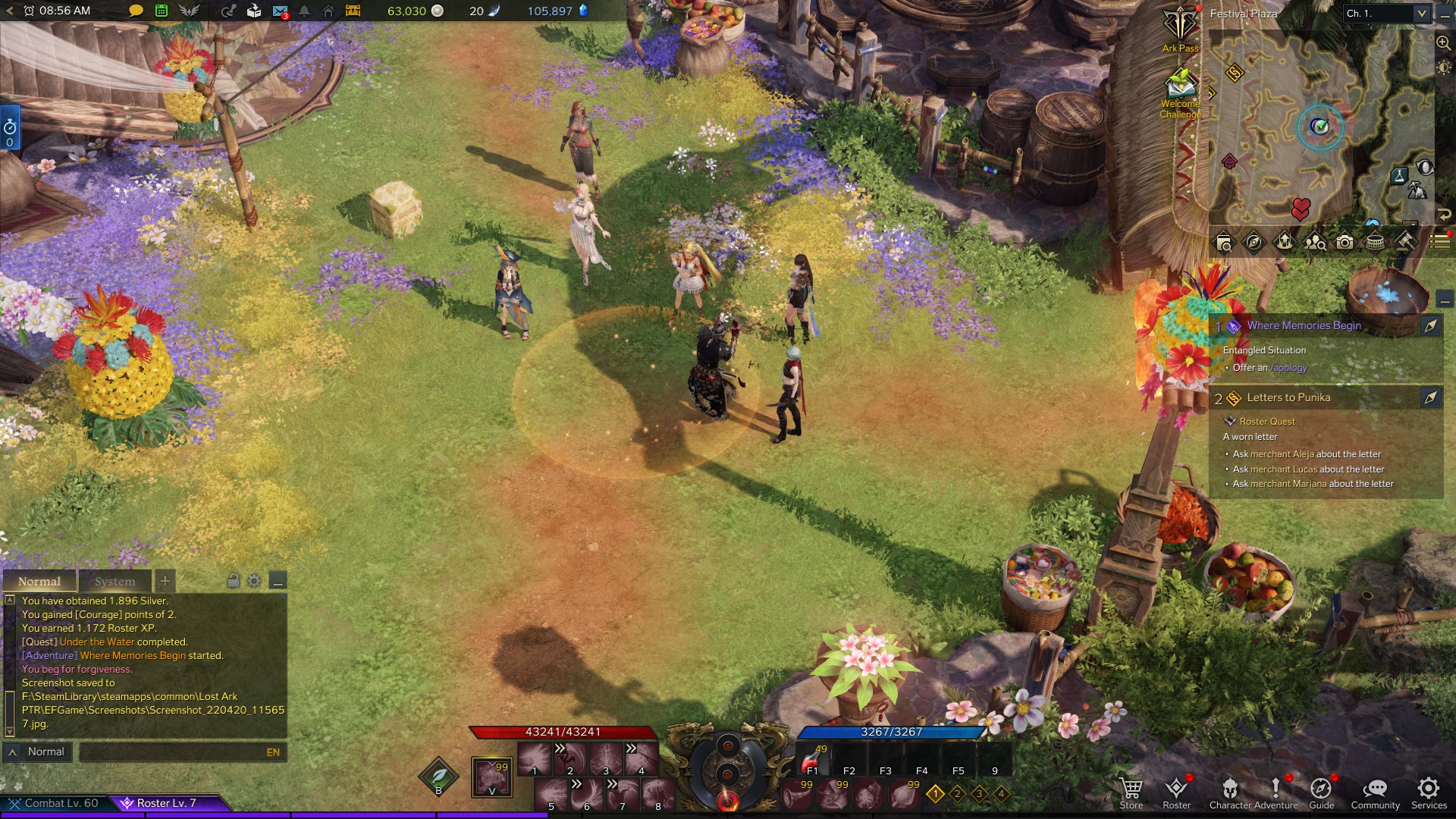 There was a point when my character was asking several people to go to a local festival at once and I was caught in a very sitcom-like situation where I had to explain to all five of these women what I was doing, but I also was at a point where I had to use an emote that I didn’t actually possess even though it appeared that I had been moved forward enough in the story where that emote should have been in my possession.

It was then that I realized that the new story was in South Vern, so I elected to sail there to see if I could perhaps get started on that and… well, the error message below was what I was greeted with when I tried to dock at the appropriate port. 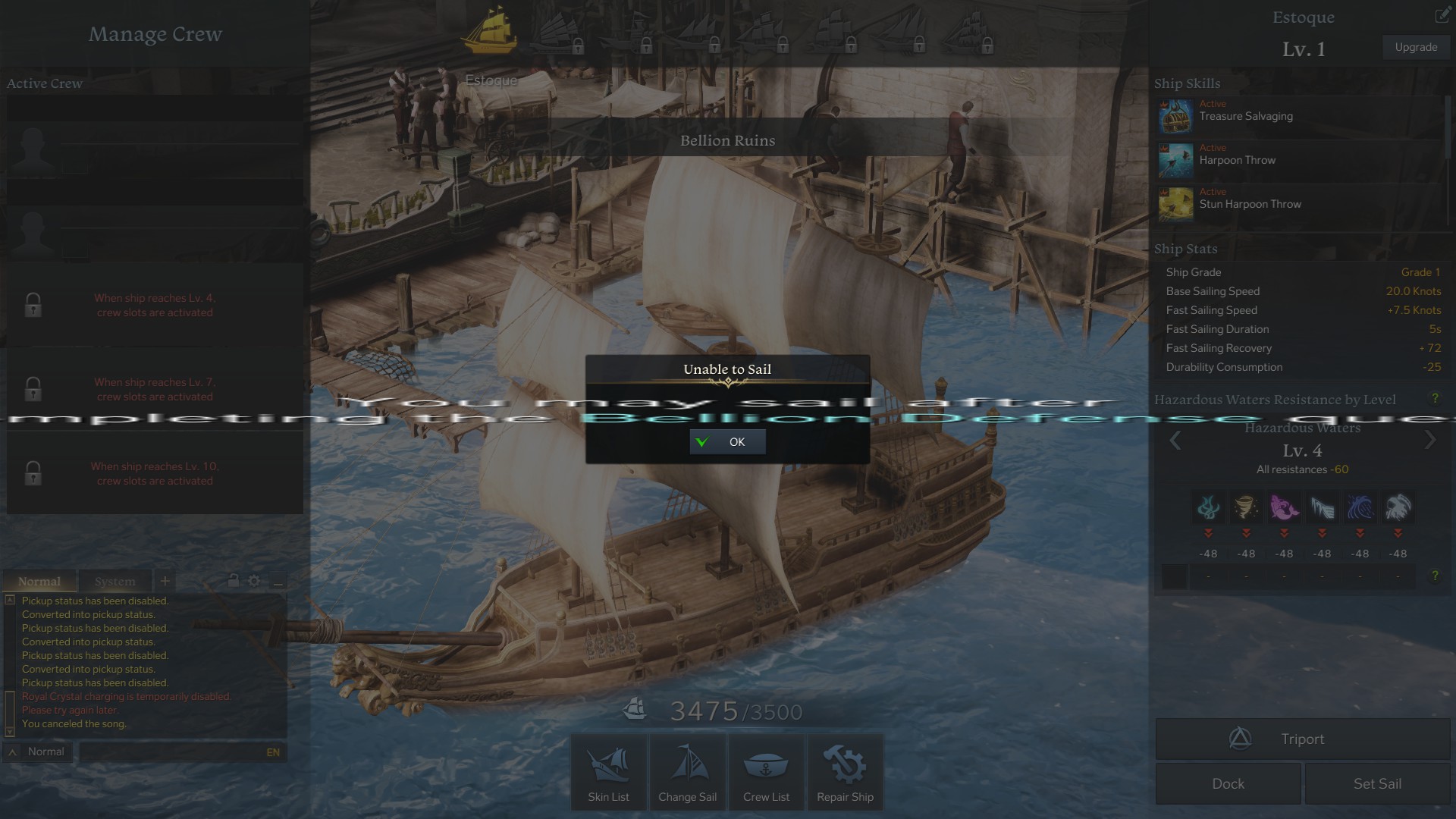 That leads me to the lion’s share of my time with the update: the Glaivier, a new female martial artist advanced class that swings a giant spear with extreme prejudice and precision. The big-ticket part of this class, as elaborated upon by Amazon Games, is the ability to swap stances mid-fight from Focus, the class’ mid-range column poking attacks, and Flurry, its close-range sweeping arc attacks. Staying in one stance long enough until a meter builds up is the main part of the Glaivier’s flow, as stance switching confers a brief bonus to the character.

I spent a whole lot of time in the game’s testing arena, getting a hang of the skills I had access to in the boosted form and wrapping my head around the whole stance swapping mechanic. Granted, this little enclosed area isn’t the best way to get a full grasp of the class, but it at least improved my comfort level after some time and I started to get a general sense of how it felt.

The first thing that stands out about the Glaivier, as with all of Lost Ark’s classes, is how incredibly well animated it is and how good the sound design is. Sure, the class lets out harsh roars as she swings her weapon around, but the panache and style of every single skill I tried felt incredibly good. What’s more, weaving standard attacks and abilities felt extremely smooth and natural, and even changing stances in the middle of the fight wasn’t quite as jarring as I had first supposed. Granted, moving from broad strokes to precise stabs took some getting used to, but I got acclimated. 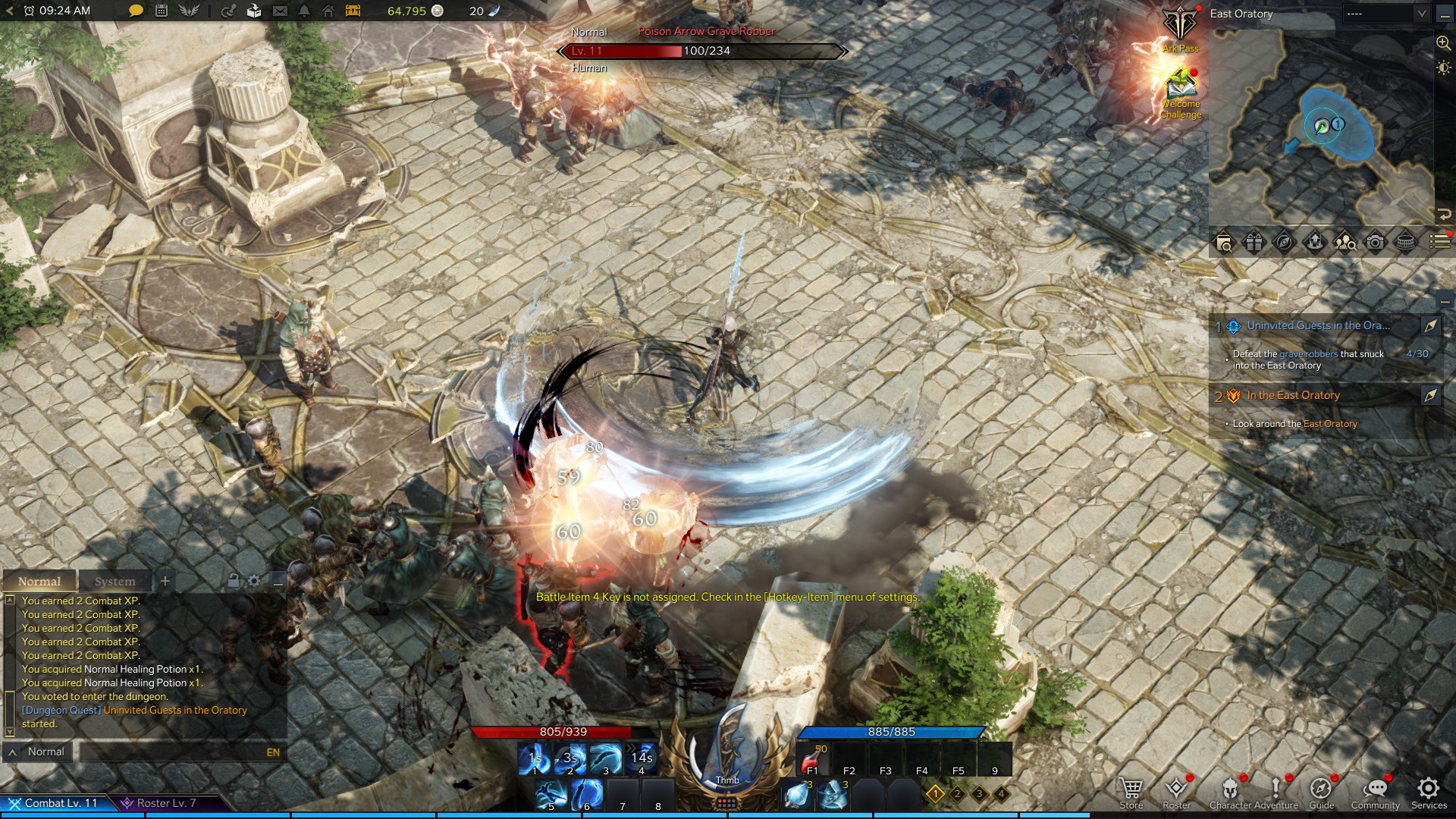 Personally speaking, I think the bigger value of stance swapping is perhaps better felt in boss fights, where you’ve got an oversized health pool to cleave through and the small boosts to damage output or attack speed matter that much more. When I was out in the game’s starting areas taking on basic enemies and doing some of the game’s starting quests, I tended to keep myself in Flurry stance in order to cleave multiple foes at once. That’s not to suggest the Focus stance didn’t hit multiple enemies – these weren’t single-target strikes so much as columns of pain – but I had to think less about positioning myself in Flurry stance when small waves of enemies were rushing headlong into my face, as all I had to do was ensure I was facing the mobs. Still, being able to swap to Focus in order to poke a somewhat distant enemy had its conditional uses.

Lastly, I can’t really talk about this update without pointing to the elephant in the room: the Ark Pass, which was indeed in the test build that I played. As reported on, this battle pass feature has 30 levels of stuff to collect, with Ark XP earned from doing missions that task you with doing things you’re probably doing regularly anyway. There is a lot of monetization at play here, though, such as the fact that there are two paid tracks for royal crystals (aka cash shop currency) and that pass XP can be purchased with blue crystals (which can be earned in-game). I’m ultimately unsure of what effect this will have on the game, but personally speaking I feel like it can be largely ignored. 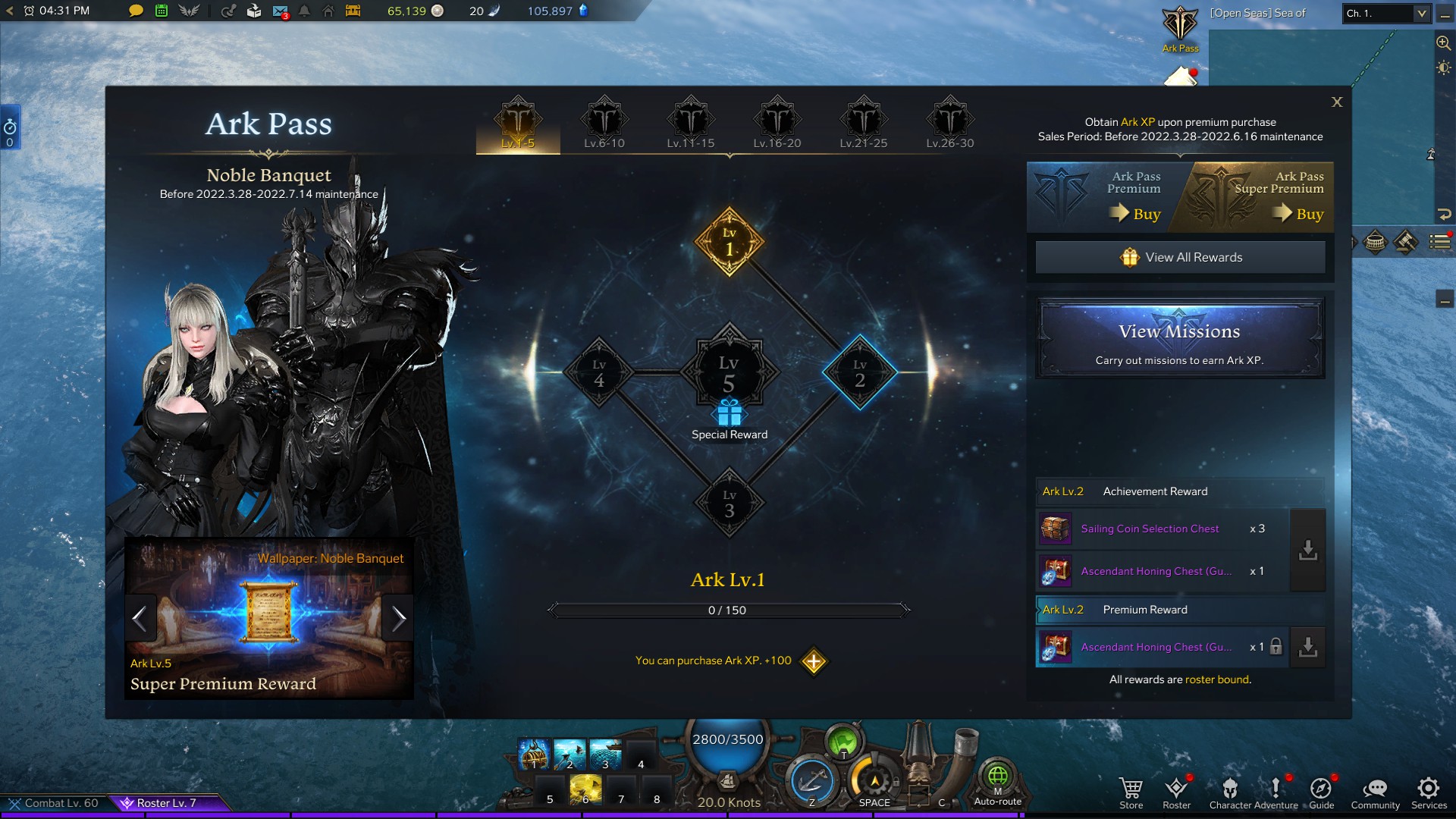 Overall, this upcoming patch is probably not going to really entice many people who have lapsed or moved away from Lost Ark back to the game. Sure, when the update comes out, they’ll be giving away level boosts in order for those who want to play a Glavier at a higher level, but then if any of the weird walls of its endgame derailed your enjoyment before, there’s not a whole lot here now to recommend a return. For those who are invested in the game (and at the right Tier level), though, there’s certainly a lot of things to look forward to. Especially if you’re the kind of person who’s eager to mightily swing a spear at all of the faces.