Itemization is a foundational system in many modern MMOs. After players reach the level cap, item levels largely drive the measurable progression of a player. Final Fantasy XIV, for example, takes a straightforward approach: farm up the required tokens and buy the latest gear from a vendor. As players play the content from week to week and purchase their weapons, their item level increases. For even stronger weapons, players can run the latest trials, raids, and savage raids. There is very little RNG involved, and progress can be plotted out weeks in advance.

On the other side of the spectrum are games like Black Desert, which ties weapon progress to luck and grinding. In order to improve, players need to “enhance” their items. It’s an easy enough concept to grasp. Players use reagents obtained through various means to level up their items. As the item gets more powerful, it’s going to need more reagents, and after a certain point, the chance of success goes down. And depending on the game being played, failing an enchant could even delete the whole weapon from existence.

Both progression styles have their own issues. But between the two, a game that uses an enhancement system usually takes flak for being exploitative or pay-to-win. And when poorly executed, it most definitely is.

However, the system has grown over the years and is a viable way to progress in a game. In this installment of Four Winds, I want to look at three games: Sword of the New World (aka Granado Espada), Black Desert Online, and Lost Ark. Each game features this system, and they’re all exemplars of how the enhancement system has evolved over time.

Granado Espada was the first free-to-play title I ever played. It stood out at the time because players controlled three characters at once. And instead of players improving a character, progression was tied to the account. Initially, players chose from a small pool of classes, but as they progressed, players could recruit more characters and NPCs into their family. It was a novel idea. And as far as I know, it had one of the earliest instances of autoplay as well. 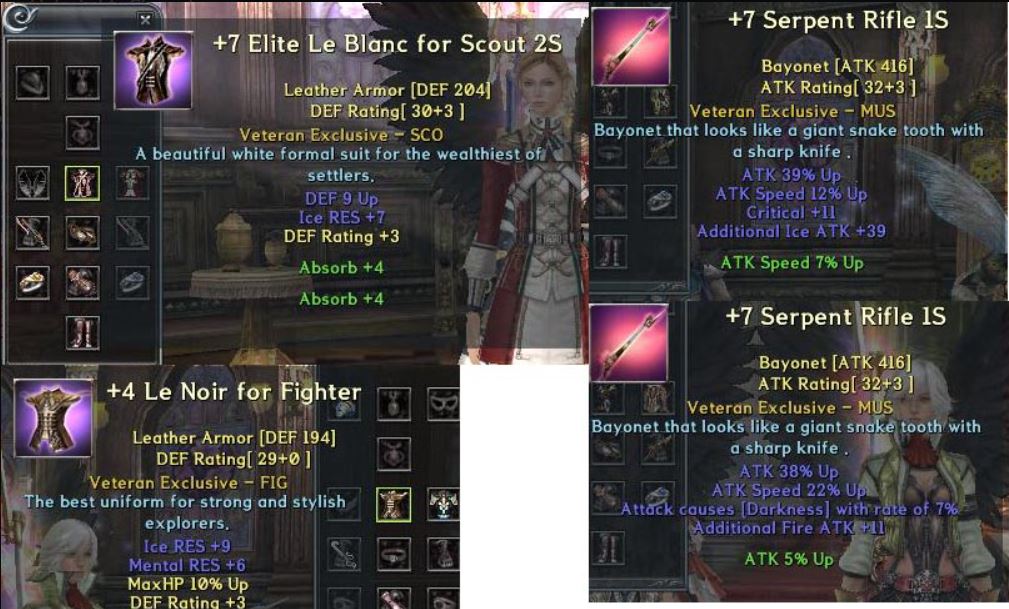 Of the three games I’m analyzing, Granado Espada featured the most unforgiving enhancing system. Players needed to use enhancement powders and upgrade accelerators to level up the item. At higher levels, if the enhancement failed, the item broke. No matter how rare or difficult it was to get the item, a failed enhancement destroyed the weapon or downgraded it. That’s where lacquers came in: They prevented destruction of the weapon, and that was the cash-shop item.

As an extra layer of complexity, there were enchant boosters and enchantment chips to use on weapons to roll for preferred stats. The big risk behind these items was losing the stats. While the enchantment chips were farmable in game, the boosters were cash items that increased the chances of gaining good stats.

I picked up Black Desert back in early 2018, and it’s the enhancement system I’m most familiar with. I even wrote about a particularly difficult time it gave me! To me, this system made a lot of sense. It had quite a bit of nuance to it, and what Pearl Abyss has done to leverage player progress without outright removing the system is commendable.

To gain in power in Black Desert, players need to enhance their weapons, armor, and accessories. I’ll start with the weapons and armor since they follow the same rules when enhancing: To enhance gear, players need black stones. Weapons need weapon black stones, and armor needs armor black stones. For the first 15 levels, failure won’t downgrade the item. The tradeoff is that the materials are lost, and the item’s max durability goes down. That max durability can be regained by using either memory fragments or a base copy of said item.

After level 15, the item becomes PRI, DUO, TRI, TET, and finally PEN, and if you don’t know what those are, that’s OK: The important thing is that at these levels, failed enhancements will downgrade the item, the lowest being PRI. Naturally these enhance attempts become more expensive, requiring more reagents, and they’ll see lower chances of success. But the item won’t be literally destroyed – just figuratively.

Enhance accessories are far more straightforward. For starters, accessory levels range between PRI to PEN. And to level them up, players need to combine two of the same accessories. Successes are self-explanatory, and failures destroy the item.

This leads to players purposefully failing enhance attempts to increase the overall failstack and then using it on the item that they want to PEN. And there’s more nuance to this system; most of it isn’t mentioned in the documentation, but experienced enhancers know that any sort of failure, be it from a failed attempt or accidently using a high failstack on an item that was meant to fail, will actually see gains, no matter how miniscule.

BDO’s system hits that midpoint. It’s still a high-risk/high-reward system. But unless the player wills it, then it’s not going to be a huge setback on the account. There are plenty of examples of players getting to PEN without putting a cent into the game. And because of BDO’s constant events, players are handed plenty of items to help with the process. There’s also a way to get a full set of gear to PEN. As long as players are willing to put the time into it, then they’ll eventually get that PEN item.

So that’s two MMOs with different item enhance systems covered. In the next edition, I’ll cover Lost Ark’s honing system and really analyze the value of these mechanics in the MMO genre.