What do you get when you take a few of the most experienced developers in the MMO industry and give them the freedom to buck the safe trend of copycatting World of Warcraft? And what would you get if you further challenged them to combine the progression from MMOs with the always-fresh strategy genre? You might just end up with something like Crowfall.

As you read this, Crowfall has launched its Kickstarter funding campaign after weeks of speculation, reveals, and an always-ticking countdown timer. ArtCraft has done all it can to prime the pump for community investment, and now we’ll have to see whether it will pay off spectacularly… or be deemed too niche for primetime.

Last week, I chatted with ArtCraft’s J. Todd Coleman and Gordon Walton for a no-holds-barred discussion about Crowfall. Enough with the teases and partial revelation; I wanted the full picture. What is Crowfall, really? And how will it set itself apart from the MMO pack?

You might remember Coleman as one of the creators of Shadowbane, a 2003-era MMO that focused heavily on open-world PvP and the ability for guilds to shape the world and build up fortresses. The title went belly-up a few years later due to technical and design issues, but Coleman couldn’t let go of the concept. Even as he moved on, he would think of the great potential that such free-form PvP and world malleability had, and he had a feeling in his gut that it could have worked. Somehow.

The key, Coleman realized, was in the beta. Due to the nature of beta server wipes, Shadowbane was constantly being reset, and players would come back in strong numbers to start anew. Excitement was palpable during these periods. Yet after the game launched and the world persisted, it stagnated quickly. Obviously, the wipe was important to keeping things fresh, but that seemed to go against the very nature of MMOs and persistent worlds.

After Coleman developed a business relationship with Walton and they decided to strike out together on a joint venture, the two of them spent six months discussing a plan for their project. They ultimately decided that they wanted to tie together two important elements: the persistent progression of MMOs and the constant reboots of strategy games. Getting it right could unlock a whole new type of gameplay barely explored by the MMO industry. But how would that work? 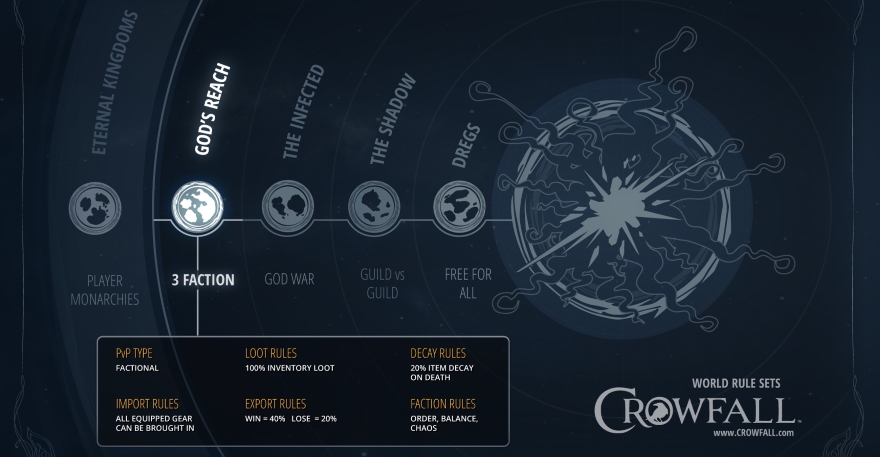 There are more worlds than these

The pitch for Crowfall became blending an MMO and a strategy game in ways that complemented each other rather than worked at cross purposes. Players will take on the role of one of several archetypes (classes) to embark on PvP campaigns on temporary worlds but will enjoy persistent character growth as well as a home on a non-destructable home world.

Coleman summed it up as, “Eternal heroes, dying worlds.” Expect to be hearing that phrase a lot from this crew.

These “inner” worlds will all have a limited lifespan, destructing either after a set period of time or when a campaign comes to a successful conclusion, and after that it will be reset with new, procedurally generated landscape. Currently, the team is experimenting with four categories of PvP worlds: God’s Reach (three-faction PvP where balance wins only if it can keep both order and chaos from dominating), The Infected (12-faction PvP), The Shadow (guild vs. guild, most similar to Shadowbane), and Dregs (free-for-all PvP). The more difficult a campaign undertaken by a player, the greater the potential rewards.

Within these four rulesets, additional settings can be tweaked by the devs. Perhaps one world might feature a one-life-only permadeath rule this time around. Maybe in one version you’ll arrive without any imported gear at all (the “Terminator” setting, Coleman said). Or what about an Elf vs. Dwarf world?

When players stream into the campaign worlds, they will have many options in front of them. Banding together for survival will be key, of course, but so will be building up fortresses and siege engines.

Coleman said to think of it like the MMO version of Risk or Civilization, where each game can operate under a different set of rules and be wiped clean afterward for a new yet familiar experience. He predicts that campaigns could last anywhere between one and six months, giving plenty of time for grand sagas and epic struggles to take place before resetting the board.

But what if I don’t want to PvP?

There’s no mistaking that Crowfall is first and foremost a PvP game, but that doesn’t mean you will be forced to PvP all of the time — or even ever, if you so wish.

The option to stick to PvE is aided by the Eternal Kingdoms: the persistent home worlds that the players will own. Think of them as moderately sized island worlds that not only includes player housing but PvE hunting grounds. Players can create their own rules for their world, perhaps turning it into a free market or a small PvP arena of their own.

While theoretically players who are into only the crafting portion of the game could stay safe at home, there’s one motivating factor to get them to try their hands at PvP. The Eternal Kingdoms are resource bankrupt, meaning that all of the crafting mats are found in (yup) the campaign worlds.

The team is depending on a strong and vibrant player economy, which is why it brought Raph Koster on board to primarily handle the architecture of such a system. Buying, selling, and supplying goods will be the resource that will power the intense struggles on campaign worlds. There will be no pay-to-win in Crowfall, either, as the team has committed to selling only cosmetics and VIP passes in the cash shop.

At this point in the interview I had to stop them and ask about the viability of making a PvP-centric game in the MMO space. After all, casual gamers have certainly flocked to PvE games and servers in droves, and the field is littered right now with current and up-and-coming PvP titles that have failed to gain a massive audience. Will Crowfall ultimately be another Darkfall or Mortal Online, with a dedicated but rather tiny community? Aren’t the devs worried about stumbling into the fate of titles like Warhammer Online and Coleman’s own Shadowbane?

Coleman said that he and the others at ArtCraft are aware of the reputation of PvP in the industry, but they believe in the project enough to risk their careers on it. “We’re not trying to make a game for millions,” he admitted, going on to say that if they got even 100,000 players on a monthly basis, they’d be ecstatic. But the truth of it is that the team doesn’t know whether or not this concept will connect with the community and take off.

The team’s decision to go the crowdfunding rather than the traditional publishing route means that it will have one big chance to get everything right. That’s why Coleman, Walton, and the others have been making calculated moves over the past two months to whet players’ appetites — but also to winnow down the field of those interested.

Coleman said that in their office they have a giant whiteboard with sticky notes about different reveals for the game. One of these reveals was the business model, which got moved from after the crowdfunding campaign launch to before it. The decision was to get any potential controversy over the buy-to-play model out in the open and discuss it instead of letting it potentially contaminate the Kickstarter narrative.

By revealing just enough about Crowfall to get the concept across while still saving more topics for later, the team hoped that it would have narrowed down the crowd to its core potential customers. These are the players whom ArtCraft wishes to reach for donations and turn into its evangelists in the coming months.

“We feel that we have a solid community already,” Coleman told me. “And we want to treat them right and entertain them with speculation.”

This deliberate approach also plays into a strategy that Coleman thinks is essential for MMOs today, which is to start small and grow into their community. He pointed to games like EVE Online and RuneScape as titles that have done this and done it well.

As with most Kickstarter campaigns, it will be quickly apparent whether or not Crowfall is destined to fund. Assuming that it is, the next step will be for the team to take community fundraising to the Crowfall website for an ongoing campaign and then get testing going this year. ArtCraft is already hard at work building core modules for the game that will be used in the myriads of rulesets and worlds that will hopefully follow.

One thing is for certain, Coleman predicts: Whether Crowfall flies or flops, people will point to this specific campaign as a prime example of what to do or not do in the crowdfunding arena.