END_OF_DOCUMENT_TOKEN_TO_BE_REPLACED
If you read the last Hyperspace Beacon, then you know that BioWare’s announcement that Ziost is finally hitting Star Wars: The Old Republic excited me beyond reason. Ziost is one of those planets that really should make a mark on the SWTOR universe because of its significance in Star Wars ancient history. Unfortunately, that also means that BioWare has a lot to live up to when it comes to creating this planet. We are, of course, talking about the former capital world of the Sith Empire and the home of the first Dark Lord of the Sith Ajunta Pall.

This past weekend I played through the Ziost storyline myself. And to make sure I had a rounded perspective, I watched a few videos playthroughs of the planetary quests too. Specifically, I’d like to mention Vulkk, who produces a monstrous swath of videos about all the SWTOR content. I watched his Republic playthrough just to make sure that I didn’t really miss anything as far as the story was concerned.

As you will come to understand after reading this, the story on Ziost feels incomplete, and frankly, the quest layout is really weird compared to all the previous quests. 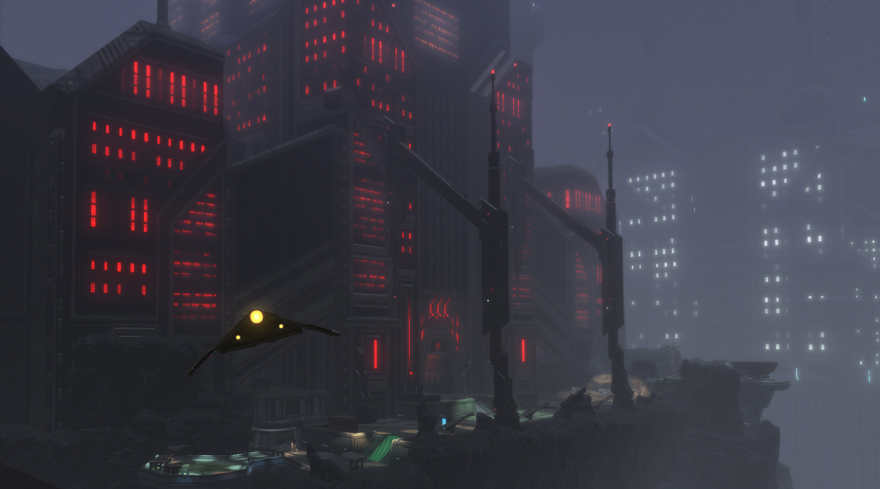 But before I begin, I should warn you that I will spoil the Shadow of Revan expansion storyline during the course of this piece. I wish there were a way around it, but it’s not really possible. As for the Ziost storyline itself, I hate to say that there isn’t much to be spoiled that hasn’t already been said by BioWare itself, but I will not tell you about the last few scenes, at least, as they do seem important and a tiny bit spoiler-y.

The Ziost storyline begins in the same place as the Shadow of Revan storyline: on your ship. I’ll admit, at this point, my ship has become nearly useless to me thanks to the Galactic Strongholds. I’m not complaining. I love my Stronghold, but I did wander the fleet for a moment before recalling that the last storylines began on my ship and maybe I should go there to find the quest. Don’t be me. Check your ship first.

Depending on whether you’re Republic or Empire, you will get an emergency message from either Theron Shan or Lana Beniko. Of course, both are in an incredible hurry and cannot give you the full details of what is exactly happening, but you have to get to Ziost right away. Instead of telling Lana to kark off like my character probably would have, I flew to Ziost anyway. 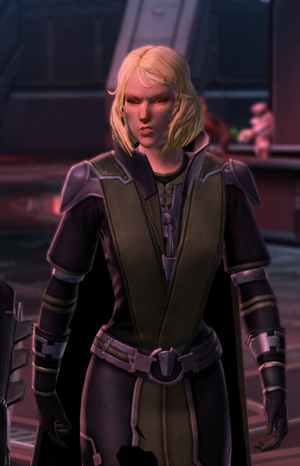 I can’t say that Star Wars: The Old Republic has ever had the best environmental design for an MMO; those two frontrunner would be Guild Wars 2 and Elder Scrolls Online. But the SWTOR design has always felt appropriate for the game and certainly had some great locations like Taris and Dromund Kaas.

As of late, BioWare has appeared to be following the less-is-more track of environmental design. For instance, I gushed over the look of Yavin IV. It made some amazingly appropriate callbacks to the original Star Wars film. But the expanse of the the playable area of the planet seemed to be too tight to really feel like a planet, and it didn’t even come close to the size of the original planets. Unfortunately, this has been BioWare’s modus operandi after Rise of the Hutt Cartel. Oricon and Mannan, and most recently Rishii, suffered from feeling as if they were built with just enough room to the tell the story that BioWare created there and nothing more.

Ziost, unfortunately, is no exception. In fact, Ziost did the next worst thing to make it feel even smaller: All the quest areas are cordoned off in an extreme manner. My hope is that this wasn’t Lead Writer Charles Boyd‘s call because it didn’t match the level of storytelling for the locations.

Let me give you an example of what I mean without being spoilerific. The first area introduced us to what was happening on the planet, and if you’ve seen any of the videos regarding this update, then you know that the former Sith Emperor Vitiate has taken mental control of the people on the planet. When you arrive, you first encounter these slaves and are informed vaguely of what’s happening on the planet.

Your first mission involves the macrobinoculars, which is a great mechanic in my opinion, and then you are sent away to a different part of the Ziostian city of New Adasta. Now, you can travel to the next area by clicking on the transport and travelling there, but to get the quest to update, I had to fly to the orbital station, then drop back down to the planet. My reaction was, “WTF?” I actually wandered around the Central District — it’s on my livestream about 47 minutes in — for the longest time trying to figure out how to do the next part of the quest.

On the subject of mechanics, I want to talk about a bug that I hope does not make it to live. Right now on the PTS, any ability that somehow roots a target does not fire correctly. For instance, if you watch my livestream VOD, you’ll notice that my Sith Warrior cannot leap to the target. This little bug popped up when 3.2.1 landed onto the server. So hopefully, when plain-old 3.2 goes live today, we will not see that issue crop up.

Of course, I’m a fan of Bioware’s storytelling, and specifically, I like what has been added to the Star Wars universe with The Old Republic stories. Clearly, update 3.2 is kind of a teaser of what is to come in future updates. However, I’m disappointed in the character development just a little bit. I’m not quite sure how to read Theron Shan this time around. During the lead up to Shadow of Revan, he appeared be to the dashing rogue archetype, hell-bent on doing the right thing and defending the Republic despite its costing him his station in the SIS. However, this time around, he seems to be a bit uncharacteristically defiant and even openly argues with the Supreme Chancellor in front of a Sith. Of course, it’s possible that the Chancellor deserved it, but at the same time, it just seemed a bit out of character for him. Maybe it will be explained in the next update after 3.2.

Lana Beniko, on the other hand, grew tremendously. Honestly, it wasn’t until this update that I really considered her a Sith. She had the D&D Lawful Good thing going on during the Shadow of Revan, but during this update, she’s clearly changed to Lawful Evil. I can’t give specifics without giving story away, but I think it’s great.

Lastly, who is this Darth Vitiate? This does not seem like the Emperor we knew from before. I am disappointed in his development. Prior to this expansion, he appeared to be an extremely patient character, heartless and ruthless but still willing to set plans in motion decades in advance. Perhaps this plays into his growing weakness, but here he seems to be sporadic and highly emotional. He’s reactive instead of proactive as he was in the past.

Regardless, the story was good, but don’t expect it to be complete. It’s hard to tell what exactly was accomplished on Ziost by either the Republic or Darth Vitiate, but perhaps we will learn more when we understand what #FallenEmpire means.