You know those moments when you are dying to get your RuneScape fix but you aren’t anywhere near your computer? When you just need to breathe in the world of Gielinor for a bit but you simply can’t log in for very long? Jagex understands, and there’s a solution on its way: RuneScape will soon join the world of idle gaming. The studio has partnered with Hyper Hippo, the creator of AdVenture Capitalist, to create a clicker game based on the world and lore of RuneScape. This new game is set to launch for the PC on Steam first this spring but will follow on mobile soon after.

What exactly is idle gaming, and how will it all tie back into RuneScape? I sat down and spoke with members of the Jagex and Hyper Hippo development teams to answer those questions.

Enlisting the aid of the Hippo

Idle games — also called incremental games, clicker games, or clicking games — are games that involve only the simplest of actions (what is simpler than clicking?) for progress. OK, so admittedly that sounds a bit like some MMOs you may have played, so what is the real difference? It’s this: In single-player games, the world comes to a halt when you log off; in MMOs, the world continues even when you leave, but your personal progress within the world stops; and in idle games (effectively zero-player games), you continue to make progress even after you log off. The point is you set your character up to get the ball rolling, then you log off and let it go from there. What you do while logged in will determine what that progress will be. As Mark Ogilvie, design director for RuneScape, put it, it’s “a game that plays itself, relying on only a few important but meaningful inputs from its player every day.” And Jagex wanted in on this new genre. Hence, the creation of RuneScape: Idle Adventures.

Speaking to us at a press event in the UK, Ogilvie emphasized that a foray into idle gaming could not be taken lightly. Jagex wanted to make an idle game RPG that RuneScape fans could play anywhere, but no matter how innovative this new genre was, a game bearing the RuneScape title would need to have the depth and fascination of the MMO. In order to accomplish that, the team reached out to what Ogilvie considers the best of that business: Hyper Hippo. 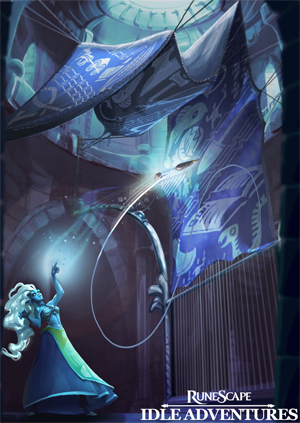 Jagex believes fans are passionate about the world. So why not give players a way to be in the world even when they can’t be in the world? As an MMO, RuneScape takes quite a bit of dedicated effort and time to experience fully. After all, it has 15 years of content, which comes out on nearly a weekly basis. Players short on time aren’t going to get very far. Cody Vigue, a level designer and writer for Hyper Hippo, put it to me this way: “An epic three-hour dungeon raid, for example, isn’t the sort of thing you can do while waiting for a bus. [But] idle games are extremely schedule-friendly. They are one of the only kinds the only kinds of games you can play for 30 seconds and get a tremendous sense of fun and engagement.” Basically, he says, it’s snack food gaming you want to go back to multiple times a day.

So what exactly about this new venture makes it worthy of the RuneScape name? It turns out that RuneScape: Idle Adventures is literally based on the world and lore of the game, and it will run in tandem with the MMO. More than just a quick click fix with a RuneScape-themed background image, this idle game will be a full-fledged narrative that players experience. Vigue told me he believes idle games are capable of telling a great story with compelling characters and that they think this might just be the first time a deep, rich story has been built into this type of game. For this project, Jagex said the sky was the limit — as long as it fit in the lore. The result? Vigue declares that “RuneScape: Idle Adventures will be the greatest story you have every played in 90-seconds or less a day.”

In R:IA, players will start out in Lumbridge Castle, the very same one that the MMORPG players start in. In this version, however, the action focuses on the top floor in the bank. Players will get to select their gender and name and become a giant mystical hero who goes around helping others and nurturing the world through quests, fights, crafting, and even fishing and farming. There will be cabbages — lots of cabbages!

The hero’s motives and actions are completely entwined with the lore and the greater story of RuneScape. Although new players unfamiliar with the MMO will have a plenty to take in, those who have dabbled (or lost themselves for years) in RuneScape will have a far richer experience, mainly because they will recognize places and names as well as get all the inside jokes. The hero itself has a very special tie to the MMO. In the MMO, the player is a guardian of the world; in the idle version, the player is the wielder of a previously unknown artifact: Yes, the ninth of RuneScape’s artifacts has now been unveiled. Vigue told me, “This artifact is known as the needle, and the tapestry it spins is linked to the fabric of the world’s history.” Hardcore RuneScape players will probably understand!

As far as gameplay, factions will vie for the attentions of your hero, and where your hero goes will dictate what skills are earned and improved. If you want to improve your fire-starting skill, you have to go to that area and set yourself up before you log off. If you want to just favor one particular faction or town above all others, you can do that, too. This, of course, will have implications on your game. Perhaps even more interestingly, your decisions may also have implications beyond the idle game; devs intend RuneScape and RuneScape: Idle Adventures to actually affect each other. How exactly that will work, however, is not completely set in stone. Current discussions include earning items in one game that can then transfer over to the other. (My plug: pets! I suggested that the hero can earn cosmetic pets that can transfer between the two.) There are also ideas on how the hero is introduced to the MMO, but that is still in development.

Stay tuned for more RuneScape reveals throughout the day!

Previewing Chronicle: RuneScape Legends ahead of its March 23 beta
Disclosure: Travel and lodging for this press event were provided by Jagex. Endless flight layovers were provided by the good people of Newark, New Jersey.
Advertisement

Sorenthaz Nate Woodard I wouldn’t argue with having something like that!

Nate Woodard Sorenthaz I’d love if a Super Robot Wars themed MMO came out but I doubt that will ever happen in the West.  At this point I’d simply be happy with an MMO where you can play both on foot and in mechs.

Sorenthaz I heard bad things about Ace of Spades but I believe they fixed a lot of the issues with it. They also made their own unique iteration called Block n’ Load that is doing quite well.

I’m going to be honest I’ll be checking this out.

I don’t want a game to play itself when I’m not there.

“a game that plays itself”
Oh boy!  Thrills and chills!  Or I could order some Sea Monkeys and pour them into a mason jar filled with tap water.  At least I’ll get fish food out of that.

Rheem Octuris Well the good news is it starts on PC first!

Seems like doing Runescape tie-ins is the way to go for Jagex, rather than trying to branch out too heavily.  They ran Ace of Spades into the ground sadly and it seems like every other big game they try to make gets canned before it sees the light of day.  Still kind of sad that the mech MMO never got made, but oh well.