As much as the battle royale-flavored Battlegrounds is big news, it wasn’t the only Paladins news at Hi-Rez Expo 2018. We also learned that there is a new champion, a new map, and more coming to the shooter. But there is always more to learn about news than an announcement provides. That’s one of the things that makes the expo great: the opportunity to talk face-to-face with devs about the game. And that’s exactly what I did!

I spoke with Art Director Thomas Holt and Lead Designer Garrett Martini about Paladins, its upcoming changes, and the lore and story of the game. I also had the chance to try my hand at the mobile take on the game, Paladins Strike, that we heard about at PAX West. Read on for an inside look from the event!

Last year saw an explosion of new champions into the game – 14 to be exact. That’s quite a number of new faces, but it’s far from the end. Of course it makes sense that there are a large number of champions. As Martini emphasized to me, “Variety, variety, variety is so important in gaming. It improves retention, and it really just makes better play experiences for our players.” Holt noted that the goal for Paladins is to have 35 champions available for players. (When I asked, I was told that the break-neck speed would not continue into 2018; only six more are slated to be introduced this year.)

With that many interesting and unique characters, it is natural that players would want to know the story behind each one. Holt admitted that players have definitely been asking for more lore and story. Is there a story? Holt said yes, there is a definite story behind the world and how the characters fit into it; all races have a backstory that includes how they fit into this fantasy universe. Martini noted that the team has started to introduce some of that in game with lore unlocks, but fans can expect more. Holt said that that lore will be “more marketing deliverables for the short term” rather than any in-game stories players can follow. And speaking of a deliverable, devs debuted the first Paladins lore cinematic, “A Realm Divided” at the expo! It details the events that shaped the realm players are fighting in:

Although the game is a unified fantasy theme now, players who have been with Paladins since the beginning may remember more sci-fi elements in the game. Why the mix of genres at the start? Holt stated that like the start of any Hi-Rez game, the team utilized assets the studio already had. And the game that spawned all assets was Global Agenda, a very sci-fi game many of us remember fondly. However, the focus ultimately became fantasy, and the team has been slowly moving out the old history and re-tooling everything to fit the theme. “There are some old [things] in the game where you can kind of see out sci-fi roots showing,” Holt said.

Speaking of early Paladins, those same beginning players may recall a number of different changes throughout the game’s soon-to-be 65 path history that have made significant changes beyond the theme. Holt addressed this by discussing the evolution of game modes and champions as the game has been developing. He noted that some things work well and some don’t in specific scenarios; ideas that don’t work well get shelved and may be be reworked or reintroduced later. (That isn’t restricted to Paladins: Hi-Rez Founder and CEO Erez Goren also talked about this very aspect of the studio’s work, as did other devs I talked with.) Those fun-to-play aspects that don’t quite fit can get recycled into other champions or mode. One example given was how Evie originally had the ability to clone. She could blink in, toss clones out, and leave, with all those clones having perfect aim and blasting away at the other team. Sounds too OP, right? It was, so that ability was removed from her. Later, it came back on the support class Ying.

Maps also evolve alongside the champions. Holt talked about how the maps all had to be retrofitted art-wise as soon as flight as a mechanic was introduced since players could now see — and possibly land on — places where they never could before. When asked about the possibility of new modes like SMITE adventures in Paladins, Holt said events could be possible, but nothing like that is planned in the short term. 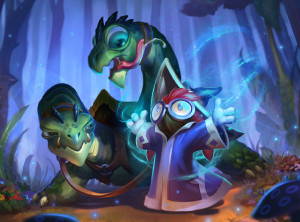 Interested in riding into battle on a two-headed dragon? Then Moji could be your dream champion! Moji (who is also referred to Moji and Friends precisely because of her summoned creatures) is an adorable little creature that uses magic to fight her enemies as a flank champion. She herself is pretty tiny, but that doesn’t mean she will have a minuscule hitbox. The devs explained that other than when she is riding an actual mount — giving her a standard mount-sized hitbox — she will be be automatically mounted atop her magically summoned familiar dragon, so her hitbox includes the size of that.

Moji’s primary fire is called Familiar Spit. Take a while guess what it does! The left dragon head spits fire. The right head doesn’t just sit back and watch all match — it’s the alt attack and spews a continuous beam of magic. Moji also has a magical barrier as well as a charge, fittingly called Scamper. Her ultimate, bon appetit, literally turns the target into a pet snack. If Moji and her pet then get up to the snack, the dragon will chomp it and enjoy the tasty treat, thereby executing the enemy. I admit I want to play this champion just so I can turn people into Scooby snacks!

If you are eager to give Moji a try, you won’t be waiting long: She will join the game next Wednesday, January 10th, when patch 65 is released. In the meantime, watch her in action in the patch overview video below.

I will be the first to admit that I am not a mobile player. As such, I can’t say too much about how well the controls feel from my brief hands-on with Paladins Strike on a phone. It was awkward for me, but that is only because I have never actually used my left thumb for movement before! What I can talk about is how the game looked and how the champions and skills felt familiar.

The game is beautiful. Even on the small screen, I loved the details of the champions. Paladins players will easily recognize the champions; my Ying was very obviously Ying. And even though I felt a bit lost on movement, the skills were familiar enough that I felt comfortable in participating. I think Paladins players who enjoy mobile games should give it a go when it opens here in NA. And there is certainly the chance that mobile players who play it might get curious about the original PC game and make the switch over to check that out.