Who had August in the poll? Anybody have August 14th specifically? Because that, my friends, is precisely when World of Warcraft’s Battle for Azeroth expansion is launching. So sayeth Blizzard’s official Twitterbot this morning. Trailer too! Now that’s one way to kick off PAX East.

Additionally, details about the various buyable editions are reiterated today as prepurchasing is live. And yes, you get your character boost right off.

Click to open wall of text about collector and digital editions
World of Warcraft: Battle for Azeroth will be available in both a standard edition (physical and digital versions available; SRP $49.99) and Digital Deluxe Edition (SRP $69.99). The latter contains an arsenal of in-game bonuses for a variety of Blizzard games, including the Seabraid Stallion (Alliance) mount, Gilded Ravasaur (Horde) mount, and Tottle the Baby Tortollan pet for World of Warcraft; an “Azeroth Is Burning” card back for Hearthstone®; a Primal Flamesaber mount in Heroes of the Storm®; Horde and Alliance sprays for StarCraft® II; and a collection of faction-themed extras for Overwatch®.

Horde & Alliance Double-Sided Mark of Allegiance: Declare your allegiance with this hefty two-sided emblem (stand included). Place it on your desk or shelf and proclaim your chosen faction to the world.
Hardcover Double-Sided Book: Elegy & A Good War: This limited-edition hardback collects two new World of Warcraft novellas depicting the Burning of Teldrassil from the points of view of the Alliance and the Horde. Each story includes original artwork exclusive to this edition.†† Written by Christie Golden and Robert Brooks.
Battle for Azeroth Digital Soundtrack: Each Collector’s Edition contains a key to download the stirring orchestral pieces from the expansion’s soundtrack—the perfect mood music for laying siege to your enemies.
World of Warcraft: Battle for Azeroth Collector’s Edition is available for preorder now. Supplies are limited; players should check with their local retailer for preorder details and availability. For players who have already pre-purchased a digital edition of the expansion and wish to upgrade to the Collector’s Edition at launch, Blizzard will credit their account Blizzard Balance in the amount of their original purchase if they redeem their Collector’s Edition key before December 31, 2018. For additional details, visit www.worldofwarcraft.com.

In addition, starting today, anyone interested in joining the fight with the next expansion can pre-purchase Battle for Azeroth digitally through the Blizzard Shop and receive the current expansion, Legion™, for free. This bundle also includes a level-110 character boost, making it a perfect jumping-on point for new and returning players. 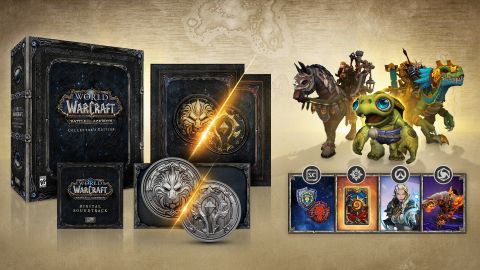 Blizz just posted a ton of new information about island expeditions too: