END_OF_DOCUMENT_TOKEN_TO_BE_REPLACED
So there was an update in EverQuest II recently. It was major enough it had a real name. But honestly, that barely garnered a blink from me. Then devs announced a new Othmir-centered Norrathian festival, and I am all excited! That’s right, throw a party with otters and I am so there. And that’s exactly what the Othmir are doing: partying. They are shaking their tails, tossing up fireworks, and dancing like nobody’s watching. What they aren’t doing is offering any involved quest hoops for players to jump through to join them. (Yes, the game has officially eschewed its name for this event.). They are just being chill and enjoying themselves, and they invite the rest of Norrath to do so as well.

Wait, what? No quests? This is EverQuest II: How will I know what to do? you may ask. That’s where this guide comes in handy. Find out the what, why, and where right here. Just be sure to jump in before 2:59 a.m. EDT on Tuesday, June 19th, because that’s when the party stops. If you’d rather see a video guide walkthrough, we also have that too!

We’ve learned that the Oceansfull celebration is all about the Othmir giving thanks to Prexus for his bounteous blessing both above and below the waves. And trust us, you’ll discover just how bountiful these blessings are. You will get lots of gifts from the Ocean Lord. With only a couple of exceptions, these are all Othmir-inspired housing decorations you can use to make an otterly adorable home! You know you want them all, and it is super easy to get them.

You can also complete a hidden achievement to earn a title (opening 25 of the clam shells completes Clam Shell Game and rewards the prefix title Shell Raiser) as well as collect nine new purple shinies to complete the Sacraments of the Deep collection to earn a Saltscale cloak. Hint: You will need to visit multiple party locations to find all the collectables, as each one is available in only a few zones.

So where do you go if you want to party with the otters? You have the choice of 11 different zones to collect all the goodies, though you do need to visit at least three in order to find all the shinies. And good news for all levels: The zones include beginning areas all the way up to higher ones, so everyone and all alts should be able to participate. If you don’t want to randomly wander Norrath looking for dancing Othmir shooting off fireworks, here’s a list of where you’ll find the celebrations. I’ve included the zone if you want to search some, a hint if you want a clue, and the waypoint if you want the exact location. I’ve also added which collectables you will find in which zones. 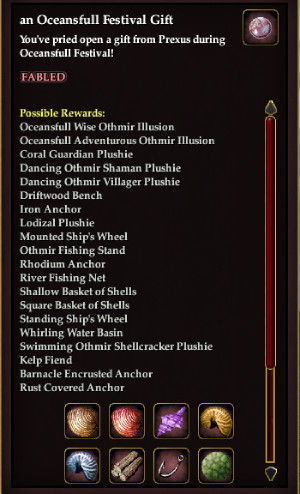 When you get there, none of the Othmir will give you a quest, but they will give you a clue of what you need to do in their chatter. (Conversely, you can also read your nearly cryptic in-game mail about the festival for the same info.) Basically, you just need to dive down to get your goodies. After all, what’s a party without party favors?

Once you reach the bottom, you’ll see giant clams. Click to open and get your prize! Told you it was pretty easy! There are, however, a couple of catches. One, the higher-level areas are deeper, so unless you have an enduring breath spell you will likely want a water-breathing totem, the fishbone earring from the Heritage Quest Hadden’s Earring, or a friendly neighborhood pocket caster to give you water-breathing. Drowning is not a fun way to party. The shells are in shallower water in the lower-level zones, but there might also be some aquatic mobs between you and them. You really can’t miss them if they are there because they are huge! If you can’t find any at all after swimming about, there might be other people there collecting, so try moving to another zone for now; you can always come back later if your level precludes you from moving into the more dangerous zones.

So what are these goodies you get? There are six plushies, two appearance items, two illision forms, and various other decorations. A full list can be seen in the screenshot to the right. For a look at them all, you can check out EQ2Traders.com.

A simple celebration from a simple folk

I’ve got to tell you, after so many long, involved festivals where I burn out long before I can get all my alts through every year, it is refreshing to have a fun, lighthearted celebration that can be completed quickly. The Othmir are a simple folks who like a simple life, and their celebration is just a chill extension of that. You can get all the rewards (multiples of them, in fact) in approximately an hour, unless your RNG is really terrible. You can also complete the collection in that time. As all the rewards are tradeable, the only reason to do it on alts is for the achievement, which is pretty quick to obtain.

I am also grateful for something new and different. I do admit it was surprising to not have any quest whatsoever (this is called EverQuest II after all) — not even a “Go dive down and get rewards” one. With all the troubles Daybreak has had lately, from laying off staff to the whole Columbus Nova fiasco, it isn’t too far-fetched to be concerned that this might be a taste of the light fare that content will become in the future. I can’t blame players if they have that worry nibbling away at the edges of their mind; the thought even occurred to me. But unless the future shows me otherwise, I am going to take this for what it appears to be: a new, super relaxed celebration, perfect for summer. I hope this becomes a yearly event, and one that grows each time.