So, you want to be a pirate, but Sea of Thieves isn’t your cup of tea? If the issue was PvP, well, you’re probably out of luck, as Ubisoft Producer Karl von der Luhe emphasized at E3 this year that one of Skull and Bones‘ chief strengths is that it lets you decide what kind of pirate you want to be: the kind who backstabs and murders his fellow buccaneer, or a wolf running with a pack. There’s no room for pacifists who just want to share Earl Grey and crumpets, alas.

While von der Luhe admits that Ubisoft admires what Rare’s done with SOT, it’s been clear for a long time that the two games are different enough to co-exist. They’re different takes on the pirate lifestyle. Even with the new hideout system for off-ship… um, town interaction, my demo of the open PvPvE area, the hunt grounds, further confirmed my feeling that Ubisoft’s game is more about the ship than it is about the pirate, something that surely has its own audience. 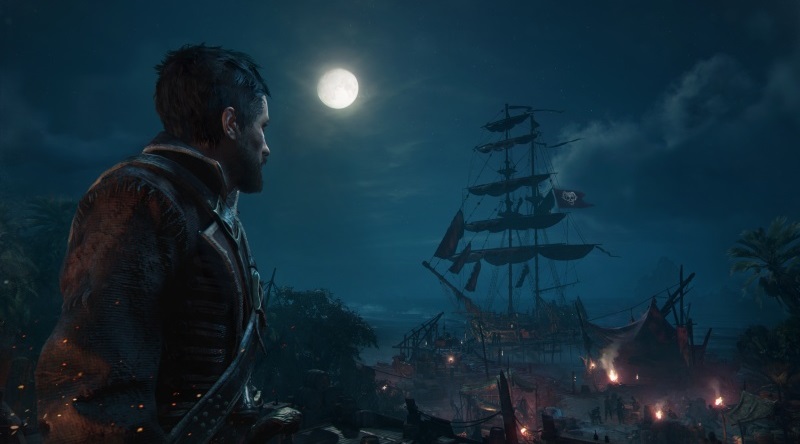 Sharks in the water

Last year, Ubisoft showed us the Loot Hunt, the arena-esque PvP mode meant for competitive players to show off their skills. While the release rewards are still in flux, it turns out that Loot Hunts aren’t meant to be the game’s main content. It’s supposed to be the Hunting Grounds, 16km by 16km PvPvE zones. Activity in the zones can be reconned by using the fortune teller in the players’ hideouts, their offship towns where they can walk around and customize their ship.

Sadly, I didn’t get to see this for myself exactly, but our pre-match cinematic seemed to show us what it looks like. The fortune teller does give fortunes, but it’s a bit different than what you may be expecting. It’s more recon than bonuses. The game uses “Fortunes” to describe a hunting ground’s status: the winds, waves, factions in the area, merchants, and general state of the world. Use that information to plan your adventure accordingly.

Again, my demo didn’t allow for this, but I still got to choose a basic ship. Our guide explained the open nature of the area, though we were divided into “teams” based on our real-world location. If it mattered, I’m not sure how, since despite the fact that several other press said they wanted to team up, I didn’t see it happen, even when I tried to invite them to join me.

Teaming, in theory, is simply enough. You use your spyglass to assess other ships (the model and the flag/faction they’re running), then press a button to invite them. Theoretically, if they accept, this ensures that you don’t accidentally blow up a friendly. That sounds normal until you find out that, according to von der Luhe, the devs are still deciding whether friendly fire will be off by default in clans. Doing this does allow for same clan griefing, but it also means zergs that recruit everyone may not be as safe as small groups that know their people and actively cooperate.

This is also key because Ubisoft is still looking into how grouping will be done. Unlike Sea of Thieves, only a single player is needed to run any and all ships in the game. While that makes the game more accessible, it doesn’t give players the idea that they need to work with others until they find a Fort, large, NPC territories that act as both raids and an incentive to not, well, kill every other player you see.

Again, there are no PvE only options. The only safe spots in the world of SB are the players’ hideouts, but those are single player areas. Von der Luhe hopes that forts, while not enforcing PvE, act to counter-balance the potential for constant griefing, but as we’re all veterans of online games, we know that that’s not enough. It may work some of the time, but I fear forts will probably be dominated by players who bring their friends to the game, not so much by strangers trying to explore digital content.

It certainly didn’t help me in my demo. Not only did my fellow press who proclaimed a desire to group up leave me high and dry, but one outright killed me in a three-way battle as I tried to invite him to a group to ensure that we wouldn’t accidentally kill each other.

I came back and attempted to kill the scourge of the demo, the dreaded “Player 6,” a pirate with a ship that could infinitely attack from the side but supposedly had trouble with attacking from the front or back. The problem is that, clearly, the front and back are smaller targets, and even for smaller ships, attacking from the front is more difficult. The fact that the guides constantly warned us of this player made me worry that perhaps the ship may be in need of balance.

When I wasn’t being attacked by allies or god-like ships, I was trying to explore the world. I got to test out the deception mechanic, which works by taking a destroyed enemy vessel’s flag and running it as your own. It actually allows you to bypass hostiles from that faction, including forts, so long as you don’t attack. The problem, of course, was that I was, constantly, expected to be fighting, so it didn’t do much.

While last year’s Loot Hunt was fun enough, Hunting Grounds felt like the kind of thing many MOP readers complain about: a gankbox. Maybe release will have some additional mechanics to make people rethink random ganking beyond losing all your treasure when you die, but the demo didn’t instill any fear into me or my fellow press pirates. 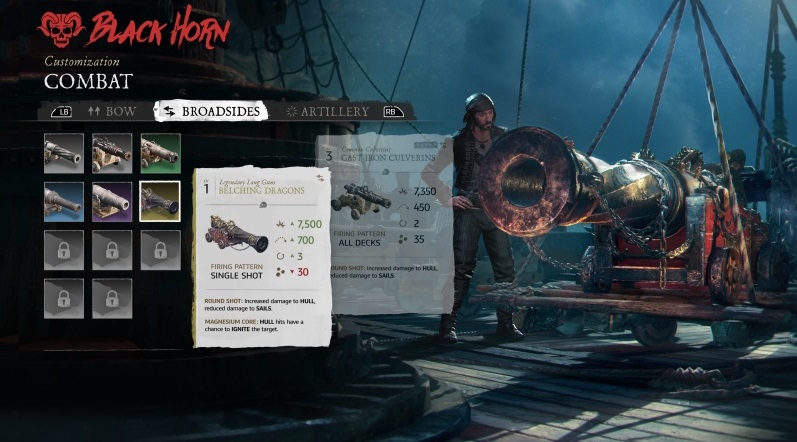 Prepare to be boarded

While that may be a turn-off to some readers, von der Luhe said that the current testers are enjoying the game, and the team’s happy about this. While in theory one could do a pirate game without PvP, it’s not exactly, well, piratey. Von der Luhe also said that the maps are at a size Ubisoft finds acceptable. While open world, the maps hold ten players, a size that allows for conflict but also allows for periods of time (around 30 minutes) without seeing another player, especially if you constantly watch your crow’s nest for potential problem and escape.

To be fair, I was able to avoid some PvP for awhile doing this, well before my chat with von der Luhe. However, since players can take your treasure by sinking you, and because winds are an important factor, there’s a high incentive to kill others to skip “boring” content, and less aggressive pirates need to factor the wind and terrain into their escape plans, which is something few gamers probably have experience with.

The strength of the forts is also supposed to help with this, as the idea is that no player should be strong enough to solo them. You should very much be seeking out other players help for them. We’ll see what happens, though. Perhaps if the Loot Hunt has good enough rewards, PvP-oriented players will flock to that once they’ve progressed far enough in the Hunting Grounds. It’s hard to know at this point.

Again, I’m more of a piratey person. I’m the human. I’m more of a Darkfall fan, so Sea of Thieves is right up my alley. However, I know we have a lot of EVE players who are used to being their ship, calculating stats and load-outs to maximize their output. For those who want to be seafaring pirates, Skull and Bones certainly seems like a good fit for them!

It’s surreal to work away in secret and take special care not to talk about the project you work on, and suddenly everyone is!

I’m personally stoked to hear that the build was very stable on the demo floor, and that people had fun with it. There really is no better feeling.

Meh, I’ll take my crumpets and wait for something else.

if you want to get an idea what this would play as a pure pve game, go give Assassin’s Creed Black Flag a shot. This game, looks like that game only made multiplayer and expanded on.

I didn’t play Black Flag, but your assessment is rather close from what I’ve seen. The difference is that “boarding” in S&B is a cutscene. The game’s much more about controlling ships than avatars.

That makes sense since.. funnily enough, in black flag boarding was just an excuse to actually use the assassin mechanics for a minute so that they could say “hey see this is totally an assassin’s creed game”.

Trove’s new Bard class is live on the PC servers with...

Astroneer is adding a hoverboard, new vehicles, and new missions this...