So I’ve been thinking. (A dangerous pastime, I know!) And I have actually been formulating an idea. And that is using a survival game like Conan Exiles to run a guided player campaign. You see, way back when as I was first playing D&D and other tabletop campaigns, I dreamed of the ability to play them in virtual reality. Can you imagine it? Instead of saying, “I cast a fireball,” you actually just do it! It is still a dream; a VR experience is not quite possible yet, but when I found MMORPGs I felt it was one step closer. I could see my actions play out in an adventure. However, for the most part it was an already scripted adventure according to the game devs. In some cases there were tools for players to make their own adventures (and boy, have I celebrated those!), but there were still more like story vignettes in a larger world out of the game master’s control. To  really have a fully-crafted experience, you need greater control than what the MMORPGs afforded.

And then came survival games. Now there is a whole world you can take control of and run a story campaign. Granted, they aren’t perfect, but survival games offer more tools for creating a robust visual player campaign a la tabletops. And that’s exactly what I am planning in Conan Exiles.

The evolution of the idea

Once I started playing survival games, starting with ARK: Survival Evolved, I was struck by the freedom to create. What you did mattered: to your relationships, to your home, to your very life. You had freedom to create your story. The chance to deeply roleplay in a world where actions have definite, lasting consequences was exciting after such a drought of games that could foster it. And since I ran the servers that I played on, I could encourage a roleplay community. An old friend and I initially tried to do that in Conan Exiles; however, I soon decided to open it up to others, including viewers, and didn’t want folks to feel they had to roleplay in order to join in and play with us.

Time went on, and I started playing many different survival games. I’ve tread through Miscreated, Outpost Zero , Valnir Rok, ROKH, and much, much more. In each one I would think about the stories that could be created. Sadly, I try out most of the games alone as friends can’t invest in all of the titles I get to try out. And for me, making a solo story just has no real allure. So the prospect of it was there, just hanging out at the back of my mind. 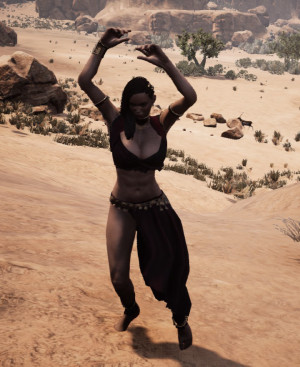 And then I reached the shelf-life of my first survival game. ARK’s island became a drudgery because I had been there and done that to almost everything. There really is only so much you can do. I had no desire to replay it all even to experience the new story that was finally implemented. Luckily, there were new maps to experience, so I moved on to those to recapture the thrill of exploration and expand my building prowess. But now I knew there was story there, and I wanted to experience it. That’s when the idea started forming.

I talked with a friend about the thought of running a server for only a guided playthrough of ARK’s story. He’d been having similar ideas about guided play that has specific goals, much like our jousting event on the island. My thoughts were to do it in a tabletop manner, setting up a long-term adventure and building the sets needed, filling areas with loot to be had, then granting XP at the end for players to further develop their characters. That would be an easier and funner way to learn the lore of ARK’s story. Then as we discussed it, it hit me: It would still be the devs’ story. What I want is to craft a unique story. For that, Conan Exiles works much better. While Conan Exiles does have some lore related to the wrist band, the world itself is a rich backdrop (after all, it is the Conan Universe!) that can be utilized with or without those bits of lore.

Implementation of the idea

So how will this work? First, you need to be able to have a private server with full admin abilities, be that as an offsite or a locally hosted server that others can join. Sadly, some survival games don’t have that key element, removing them from consideration as the campaign world. Because I want the world to be closed except for campaign runs, and closed to everyone not in the party, it makes better sense to use a locally hosted one than to pay for it to be open for only four hours a week or so. That also gives me time to prepare the game world by building necessary plot devices like outposts, cities, or dungeons without being charged.

Next up, is deciding the number of party members and the duration of the adventure. This is vital for the story planning bit. For the first go around, my adventure will be fairly short-lived (perhaps a month of once a week play sessions) as we test the waters. With these boundaries in mind, I can write the narrative, then hop into the game and build the stage. Will it be a guarded house full of treasures? Will it be ruins filled with dangers? A sprawling city with NPCs and their stories? So many choices.

To run the game, we’ll have the GM narrating and guiding the party to a degree. Will the party have a choice of where to go? Of course! But little nuggets (like notes) will entice the party to go to and investigate certain places. Just like a tabletop roleplaying game, the party will have to interact with their environment, make decisions, and face the consequences of those decisions. They will also accumulate wealth and experience. There will be die rolls at points, but there will also be organic encounters thanks to the game mechanics. At the end of the play session, players will be granted a chunk of XP to develop their character more. In the end, they may uncover the whole story arc, or they may wander about aimlessly just collecting loot. Each party is always different.

Thanks to survival games, we have another medium for full world roleplay and storytelling adventures. I am pretty stoked about the idea and have been making preparations to pull one off. I am excited to have the opportunity to run a campaign with visual elements, and not just miniatures and dice. Would you want to try such a game? What game would you love see one in? Let me know!

Perfect Ten: 10 MMO haunted houses to explore – if you dare….