With the holidays coming up and Northern Hemisphere winter just getting started, you might be thinking about what PC upgrades will keep you cozy and entertained all season long. MassivelyOP is here to help with suggestions that will keep your frames rated and your tower case generating plenty of heat all winter long! If you’re going to pick one of these up for yourself or as a gift, please consider using our links as a way to help support your favorite MMO news site (which is us, right?). Please note that Amazon affiliate links may grant a small commission to us, which is very much appreciated!

So this year the GTX 1000-series cards have all seen price drops, and it’s now possible to get a mid-range  GTX 1060 card packaged by a reputable manufacturer like PNY or Asus for under $300 that will be a reliable upgrade from any GTX 960 or earlier card (bit of a side-grade from a GTX 970, and the GTX 980 still runs faster, albeit at significantly higher energy consumption). And if you want to spend $50 more, they’ll sell you the XLR8 overclocked version, which promises 10% better clock speeds without going all the way to the $450 GTX 1070.

If you’re looking for fast response in games, you need to go wired, and you might want to go with mechanical switches for solid tactile feedback and confirmed button presses. The Logitech G910 has all of that along with programmable gaming buttons (along the left edge and above the function keys, where you can reach them without letting go of WASD), customizable RGB backlighting, and built-in phone dock. Cup holder sold separately. This is ordinarily Logitech’s top-of-the-line gaming keyboard at $180, but today, Amazon has it discounted to $90 as part of their Black Friday week deals. So if your gaming keyboard happens to be missing all of its left-hand letter labels and your fingers have worn little grooves deep into the plastic keys, don’t miss this chance to upgrade! 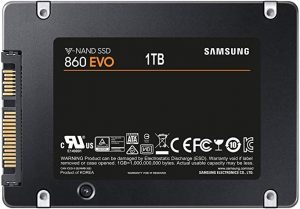 If you’ve been holding off on switching to a solid state drive because the choice was between an affordable drive that could hold Windows + one MMO and a $500 drive that could hold all of your executables, this might finally be your time! Samsung’s 860-series 1TB SATA SSDs are now on sale for $130, which will give you enough space for The Elder Scrolls Online‘s gigantic textures and the ever-growing gw2.dat file that apparently contains all of Tyria, while promising some of the speediest load times that are possible over a SATA 3.0 connection.

When my old claw mouse died, I had a really hard time finding anything that would be as comfortable for me to use for work and play (and for MMOs, MOBAs, and shooters!) Luckily, for the perpetually undecided among us, there’s the Razer Naga Trinity, the mouse with three interchangeable side panels. Full disclosure: I had settled on the Razer Naga Hex, the 7-side-button MOBA version, but when the left mouse button on my new Hex unexpectedly snapped off, Razer graciously replaced it with the Trinity, since the Naga v2 was, by that time, out of stock indefinitely. So I got a chance to try out the switchable side panels, and the system is very slick: The side panels stick on magnetically, firmly attached but easy enough to remove when you want to. The hotkeys have default mappings that will let you use the keymap in most games to call them (the MOBA keys are mapped to numbers 1-7 by default, for example), but can be easily remapped in the Razer Central software in the event that you need the numbers for some other nefarious UI plan of your own. Warning to lefties: This is a very right-handed mouse. But if you’re the kind of gamer who can train his or her right thumb to do tricks, this is an amazing upgrade to the number of reachable buttons.

Do you guys not have phones?

Well, the D:I gaming console just resulted in an awkward 10 minute conversation as I tried to explain to coworkers why this was so funny. Surprisingly more difficult than I was expecting.

*Those are new products, used for 1060 doesn’t seem to come much cheaper, but does for Rx580. A 1060 6G will be ~2% better performance than an Rx 580 8G (per benchmarks, actual game results depend on optimization methods and some settings). The Rx580 will run ~25% higher wattage, meaning you will spend more money on that (jokes about heating your house aside).*

Hope that is helpful to anyone looking in that range (if you are looking top end, you can get some deals on prebuilt computers with 2070, 2080, or 2080 Tis this BF, just not so much on the individual cards).

I have the 1060 6G and love it. It’s definitely a really good middle of the line video card (now).

Yep! I just figured I’d note some low price deals and some analysis for those interested in an upgrade on the cheap! :)

Really does live up to the name! :P

Just Sunday, Newegg had the Logitech G600 MMO mouse for $25 on special for 24 hours. I FAR prefer the G600 to anything Razer has in the thumb-buttoned mouse department, mostly because of the ring finger button that works as a g-switch or a fully-bind ready button. I use mine for push-to-talk on ventrilo and discord, and, while it takes about a week or so to get used to the ring finger button being there, it feels like second nature now.

And I’m not being paid by Logitech, I just really like the G600.

I have a rotary phone.

It’s dated but the only contraption allowing me to talk with my grandmother, who passed away twenty years ago and thus obviously never got used to use modern phones.

Its only downside is I have to keep it submerged in holy water at night or it won’t stop ringing even when not plugged into the socket.

On a technical note, I am pondering about putting together a new rig and I am looking fondly (as in, with bovine eyes, drooling slightly) toward one of those pci-based internal SSD to replace my current SATA drives.

How much space do you need. How much are you willing to spend.

Those are the relevant questions. Because unless you keep your storage down, the SSDs get expensive fast. Having a small one for boot, one for games that really need it, and a standard drive is feasible without a fortune though.

I’am sailing on two SSD on sata already, 120Gb for boot (dated and failing) and a new 500Gb for eveything else, with mass storage on demand on USB drives…

Probably a single pci disk for boot and keeping the 500gb on sata might work, it’s aaaall in the air really…. so much money for a new rig

Yep. The small SSDs for boot are nice, but most computers do well with sleep anymore. So not as needed most of the time!

I do love USB external drives, just wish the bigger SSDs would come down in price already! I can not store a dozen games on 256 GB, and everything bigger starts getting $$$$$ fast. (I like having some variety, so picking what goes on the SSD and what goes on the normal drive is my challenge!)