Tuesday, Star Wars: The Old Republic released a new event update called the Dantooine Incursion. I played through the questlines on the PTS, then I played through them twice again on the live servers to see if maybe I missed something. I believe I understand why all the quests are kind of dull, but honestly, I think BioWare can do better.

END_OF_DOCUMENT_TOKEN_TO_BE_REPLACED
What I’d like to do today is breakdown the reasons why these event quests don’t work well, what parts of them do work, and what BioWare can do next time to make the next event have more impact. 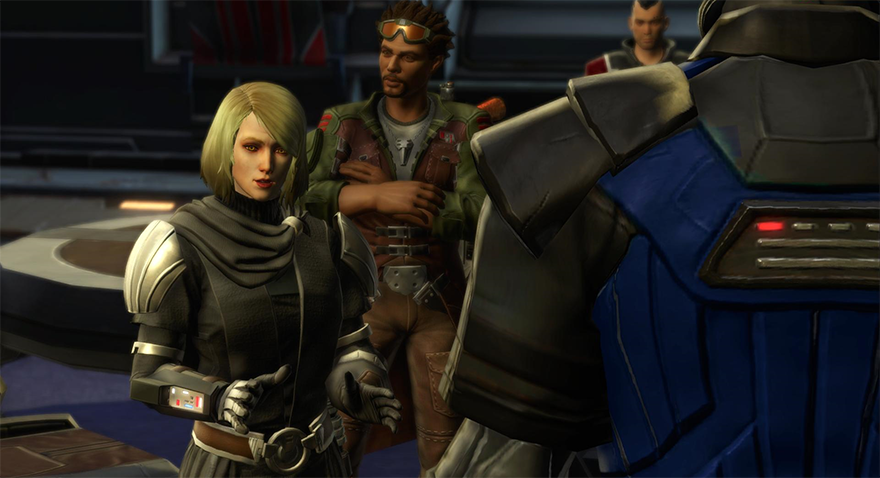 December gave players the first new bit of main story since the end of the betrayer storyline. Although the Jedi Under Siege story on Ossus was short, it was significant. I really enjoyed it. I also believe that it was perfectly set in a place that had meaning for the player and all the NPCs involved. Six months later, we get what I’m going to call an interlude. Players as the Alliance Commander meet with the small council of the Alliance’s most influential advisors: Lana Beniko, Hylo Viz, Dr. Oggurobb, Bey’wan Aygo, Koth Vortena (if he’s still around), and Theron Shan (if he’s still around).

During this meeting, players are told what’s happening around the galaxy and how the Alliance is assisting. Of course, the dialogue varies based on the choices you’ve made in the past. It’s been so long since I’ve had to make a meaningful choice or interacted with some of these characters that I completely forgot which of my alts did what. I’m usually pretty good about recalling the individual storylines. It surprised me to see Koth at the meeting on one of my Sith Warriors. And I hadn’t mentioned to Theron that I was working for the Republic? I guess not.

I’m sorry Republic characters, but I did not play through the Republic version of this little meeting, but I watched Vulkk’s mash-up of the cutscenes, which I will include below. The Imperial side, on the other hand, didn’t live up to the same quality.

After the meeting with the small council, Republic characters are asked to sit down with for an interview with the Republic News Network, and Imperial characters are asked to make a speech at an Imperial rally. During the interview, the player is asked a series of questions about how he feels about being in the Republic again and what he believes will happen going forward. Players have the opportunity to make multiple choices during the conversation, and although Vulkk’s character was not a Saboteur, I can see where those traitorous bits could fit into the conversation. In contrast, Imperial players get basically one choice while making the speech. Even though one of my characters was a Saboteur, the dialogue was so bad that I couldn’t even bring myself to make the Saboteur choice during the speech. I escaped out and replayed the scene with better dialogue.

What’s Dantooine got to do with it?

The main storyline quest automagically appeared in your quest log, but the Dantooine Incursion had to be inferred from the overhead announcement on Vaiken Station. That fits with the other event-based questlines like bounty week or the Rakghoul outbreaks, but the announcement tells you to find “the nearest information droid at once.” Having completed all the quests on Vaiken station, I first looked for a droid that had a quest marker above its head; there are none. In fact, don’t look for an information droid at all. The News Terminal has all the information needed to start the Dantooine Incursion questline.

I did like the little bonus players get if they have completed the Ossus questline. If that quest hasn’t been completed, then the bonus material is completely skipped.

From a strategic perspective, I understand why Dantooine is important to the war between the Republic and Empire. I do like that it was spelled out for those who might not understand, but I’m not sure I understand why the Nova Blades — a pirate gang — was used in place of actual Imperial forces. In fact, it seems to dilute the rally that happened just before it in the main story interlude. Which battle were they off to if it wasn’t Dantooine?

The most glaring issue for me was that it was, well, Dantooine. I mentioned previously that this episode marks the fifth time that Dantooine has been featured in a Star Wars video game. And it was wasted. As far as the story is concerned, this could have been Biffo the Hutt’s backyard, and it would have held the same significance to the plot. BioWare wasted a planet with a rich history to tell a completely meaningless tale of pirates going rogue. When you think about it, they are pirates; it’s kind of their job to go rogue.

In the past, I’ve understood why BioWare has had a lighter release schedule over some other games. The engine is notoriously difficult to work with, and each dialogue scene displays about twice as much work as nearly every other MMO on the market. Things just don’t get finished quickly with SWTOR, and my expectations are usually very low when it comes to quantity of content.

I usually expect more quality, especially when it comes to story. My first thought is that maybe the entire thing was written and constructed by one writer with very little oversight or deliberation before it was published. But that’s clearly not the case. Creative Director Charles Boyd was a writer for the game, penning the Trooper story himself. And Dantooine’s quests differ drastically in tone from the interlude main story dialogue, which indicates a different writer to me.

I’m just guessing here — and I hate being so harsh — but it seems to me that everything that came out in the Dantooine patch was crunched. From my perspective, it’s like the BioWare team looked at the release timeline and saw that it would be a whole year between significant content updates and tossed another one in at the last minute. Given the talented writers that the BioWare team has, I truly believe that this patch was put together in maybe a month. Perhaps it finished up the work on Anthem and realized that it had not done anything for SWTOR in a long time.

I’m a SWTOR fan, and my recommendation for this update is to continue playing something else if you’ve already played the Ossus content. If it’s been a year since you’ve played, they a sub for a month could be worth your time — especially for Ossus — but don’t come back because of Dantooine.