My very first memory of Dantooine was surprisingly its first real appearance in a video game at all. Star Wars Galaxies imagined Dantooine as a purple and green planet with a mixture of high-tech farming, pirates, and primitive humanoid civilizations. But the two things that Star Wars Galaxies had to have were the hidden and abandoned Rebel base and the Jedi temple. Anything else was just extra flavor.

END_OF_DOCUMENT_TOKEN_TO_BE_REPLACED
The latest entry into the Dantooine gaming anthology is Star Wars: The Old Republic. According to the SWTOR website, Dantooine sits on the edge of Imperial territory and is the perfect staging area for a Republic invasion. However, the Empire saw this coming and set forth an incursion plan. Unfortunately, the plan didn’t work out as expected and chaos ensues.

Today, I would like to take some trips to Dantooine. As the title says, we’ve seen Dantooine in five different games now. I’d like to take a few moments and compare the different versions of the same planet and pick my favorite. 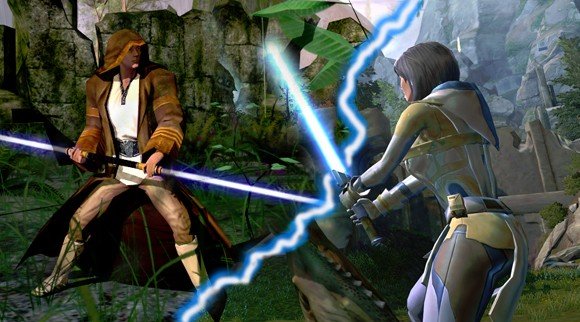 It’s been eight years since SWG shut down, but emulators are popping up everywhere. The character graphics have never been top notch, but the open world and scenery of SWG have always been great. When the development team for SWTOR really ramped up around 2010, I created a post on Massively-of-old about a developer switching from SWG to SWTOR. As the header of that post, I used a screenshot from Dantooine morphing into a shot of Tython. Although the evidence as disappeared into the internet archives, I recall one commenter saying that he or she liked the image from Dantooine better, stating that graphics were sharper.

I don’t know that the graphics were actually better, but open-world nature of SWG‘s Dantooine created a unique experience. Up to that point, we had really only heard mention of Dantooine in the original Star Wars movie. The canon of the planet was more fluid than set in stone.

I really enjoyed SWG‘s Dantooine because it was a great mix of Star Wars lore, themes, and exploration. I enjoy survival games like Canon Exiles because you can head off in one direction and keep going until you die, finding different things along the way. The story of Dantooine unravels itself in a mostly organic way. In the northeast, you have the Jedi temple and other Force relics. There isn’t a lot of story, but much can be inferred. To the northwest, the Rebel base sits. There is a small story arc that leads you through there, but it’s abandoned, so most of the actual story of the base only hinted at. The Warren and the Dantari tribes are mostly to the south. The Warren themepark was always one of my favorite because of the Imperial genetic experimentation aspects and the difficulty of getting through that content.

Unlike SWG’s Dantooine, the Dantooine in Knights of the Old Republic was not a character in itself. Dantooine was more of a place to plop a Jedi academy. Although I liked the storyline of reforming Revan and finding the starmap, I felt that the story in KOTOR and KOTOR II could have been just about any other generic planet. Of course, I did enjoy seeing the Jedi Enclave in full swing, and if that was required to be on Dantooine, then I guess it had to be on Dantooine.

If there is one thing that is unique about the Dantooine of KOTOR and KOTOR II, it has to be the Crystal Cave. Yes, SWG had the cave, too, but the most in-depth explanation of the cave took place in KOTOR. We learned from that game that Adegan crystals formed in there, which could then be formed into lightsaber crystals. Previously, Adega was the only place to acquire these naturally growing crystals.

Battlefront: Elite Squadron really did Dantooine no favors. It was a terrible game on the Nintendo DS and the PlayStation Portable, and I almost didn’t count it among the five games that featured Dantooine. But it was a good chunk of the game, so I’m sure I would get scolded if I skipped it. But you should skip it.

Empire at War, on the other hand, made Dantooine a bit more interesting. Empire at War didn’t exactly reinvent Dantooine or tell us a grand story about the planet, but it gave us a wonderful example of why the planet was important to a nation that expanded a galaxy and why it was important to leave it sparsely civilized. And it included a great perk where ground bases are not detectable from space.

Dantooine hit the SWTOR public test servers not too many weeks back, and I’ve spent a bit of time there doing quests and attempting to explore. In the past, BioWare has made some of the most boring environments interesting and unique. I am still floored at how good Tatooine looks. It’s a desert planet that is somehow interesting to explore. Even Ossus, which was decimated by a dying star, had its fantastic moments.

My first impressions of Dantooine were blah. I felt like I had seen this planet before. The structures, the layout, everything seemed to be rehashed. It initially appeared to be Balmora’s (from vanilla SWTOR) less interesting cousin. Balmora might have had a boring job, but it climbed mountains and rode a Harley on the weekends. Dantooine stayed at home watching reality TV.

The best thing that Dantooine has going for it is its quests. Don’t get me wrong, I don’t think the storyline was super exciting; we are dealing with too-big-for-their-britches pirates that the Empire thought it could control. What makes the quests interesting is the difficulty. I couldn’t handle some of them on my level 70 character, which is fun for me. Of course, with the raised level cap and the additional gear that I will eventually get, I’m sure even the most difficult heroics will be less… heroic.

I have to mention the most interesting thing about Dantooine because it does make it unique from anything else: the East Way achievement. Xam Xam, an MMO blogger for SWTOR and Elder Scrolls Online, gave us a rundown of how to earn this achievement in her article “How To Lose 150 Million Credits in the Old Republic.” The gist is that instead of killing everyone inside a building during the Reactor Ransom quest, you simply pay the 15 million credit ransom. Do that 10 times and you earn The Easy Way achievement. I don’t know whether that’s BioWare devs trolling us or if this was intended to be a credit sink or both, but I do like it.

In fairness, fictional deserts do tend to have a high degree of aesthetic pop anyway.