Those with long memories might recall that way back in 2010 prior to Guild Wars 2’s launch, ArenaNet made a (small) bit of noise about developing a tie-in mobile app that would allow players to stay connected to the MMO on the go. This “Extended Experience” ended up fizzling out by the release day.

END_OF_DOCUMENT_TOKEN_TO_BE_REPLACED
And that’s far from the only time we’ve thought a mobile GW2 was in the works. Back in 2017, NCsoft teased the possibility. And then early this year we learned that one of the more recent games ArenaNet canceled ahead of its mass-layoffs and restructure was likely a mobile title. Needless to say, players have kept an ear to the ground for any hint of mobile in GW2’s future.

Could that day be coming soon? In this past week’s Q2 2019 financial report, NCsoft mentioned that ArenaNet was evaluating “internal reviews on several projects” such as a mobile version of Guild Wars 2.

Guild Wars 2’s earnings have remained fairly flat over the last three quarters, a similar pattern to Aion and Lineage II. Blade & Soul continued its downward trend, while the original Lineage spiked up significantly thanks to its Remaster update and new F2P business model. Mobile games, however, continue to dominate NCsoft’s earnings. 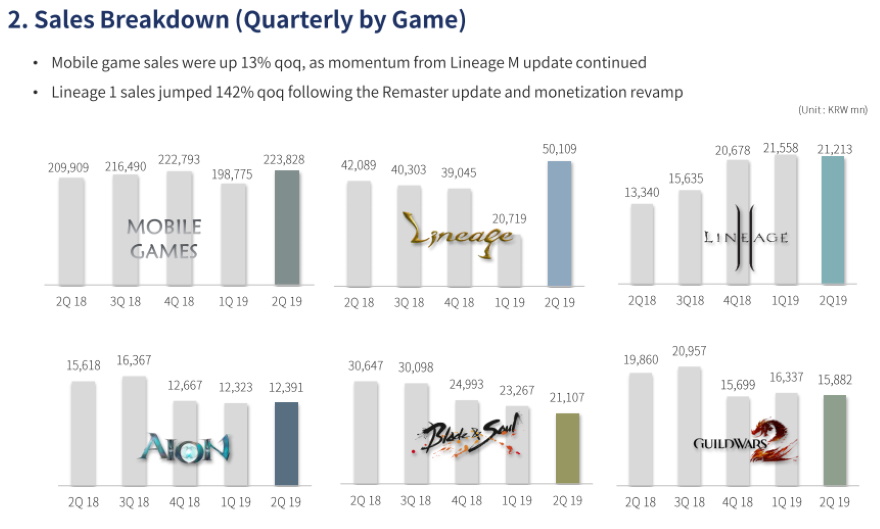