If you’re old enough, you remember back when there were multiple competing video game magazines, and most of them would gladly run multi-page spreads on MMOs only to give them terrible reviews at launch. That’s not the case with ArenaNet’s Guild Wars 2 Living World magazine, the first issue of which rolled out to social media and email inboxes last night.

END_OF_DOCUMENT_TOKEN_TO_BE_REPLACED
Now, yes, it is technically one giant marketing ad, but we’re here for it, since it’s also packed with fun interactive bits and links to recent updates you may have missed. It’s also packed with lore, a primer on dragons and key Norn NPCs, and goofy joke advertisements. Critically, there’s confirmation about how Bound with Blood – that’s the Icebrood Saga’s prologue episode – will begin: in Grothmar Valley, home of the Blood Legion, with a party. It’s the perfect zone to help you get those autumn feels.

There may even be a few new clues about content tucked into the pages; one blurb essentially suggests we’re getting 10-man hardmode versions of the final encounter of the episode. 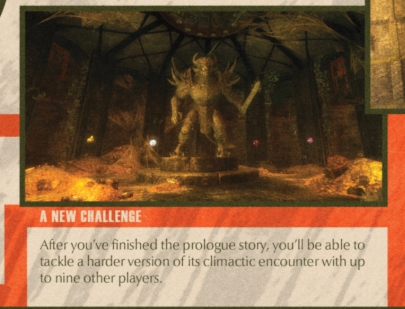 Plus you gotta love the retro mail inclusions. And the old-school Guild Wars fonts! It also looks like the Dark Horse ad for the artbook is not a fake ad; it’s legit.

Path of Fire – which now includes Heart of Thorns for free – is down to under $15 on some third-party retailers. We’ve not tried it and we’re not affiliated, but apparently the code SEPTEMBERGAMER will get you another 10% off.

Didn’t got interested about anything else in the magazine ( GW2 story really hasn’t been interesting to me for a while now ), but the Guild Wars 2 name being in Guild Wars 1 font at the start was cute. And not in a good way.

There is one thing I don’t get: there are some small details added in this “magazine” but why the hell even create it, you had a big, hyped event in the THEATER! Why don’t tell everything there? Why do this lame “magazine” and double down on merchandise?

Ironically, I feel they should have skipped the event and its hype; the information they had to release better fit this low-key retro-magazine instead.

The Dark Horse Art book was mentioned at the event.

That’s a great “magazine” – but it makes me shake my head at the video event even more. The “Prologue” is a full-fledged LW episode. It’s got a full map, with a meta, cool events, and even one of the new Strike Missions (which the event implied weren’t going to show up until Episode 1 – at least, that’s what I took from it.)

Where were the videos of all of this? The Blood Keep? Doomlore Shrine? Charr Demolition Derbies? Oooze Pit Battles? The Cave of the Khan-Ur? It’s a video event, all that’s coming in a couple weeks, and you just told us about it in a magazine that clearly wasn’t thrown together since the event – why didn’t you show us this stuff?

And Jhavi Jorasdottir? Coulda mentioned her – that’s a name to conjure with for the Norn – how’s Brahm going to deal with another Norn Legend? Crecia Stormglow? She’s interesting – but only if you read Rytlock’s Requiem story – why not highlight her, and send people to those for more info?

And Rytlock’s bio? “Inadvertently helps set in motion a series of events that threatens the future of the Charr High Legions” oh? Really? That line might have made a dramatic leadin to the tease of the cutscene. It certainly puts a much different slant on it than a mere interpersonal conflict between Charr.

They had to show some kind of road map for the future episodes while saving a big chunk of time for their merch infomercial.

These “strikes” could be good. I thought they would be open world based encounters, so it will be interesting to see how this plays out.

I hope it is easy to make parties.