Back in 2018, Perfect World brought a couple of new games to E3, one of them being ReEvolve. At the time, it was described as a mobile sandbox with an “immersive, real-world environment, replete with a range of different ecosystems, a day and night cycle, changing weather, and realistic animal behaviors including food chains and migration,” plus crafting, architecture, base-building, housing, farming, animal breeding, PvE, and PvP. Based on the pitch and MOP’s Andrew’s hands-on, I was really looking forward to it – I even named it one of my most anticipated games for 2019, and it made its way to a couple of our “MMOs to watch” this year lists too.

But then information dried up, and the planned Chinese release date of 2018 and western release date of early 2019 clearly did not happen. The MMORPG subreddit, however, noticed this week that the game’s English Facebook, which went dormant after last year’s E3, actually came back to life this summer with promos for the game and a claim that it’s “now in the final stages of its development.” Here’s the June 28th, 2019, announcement, in which PWE notes the game is in “short-term testing on Android” in the Chinese market right now: 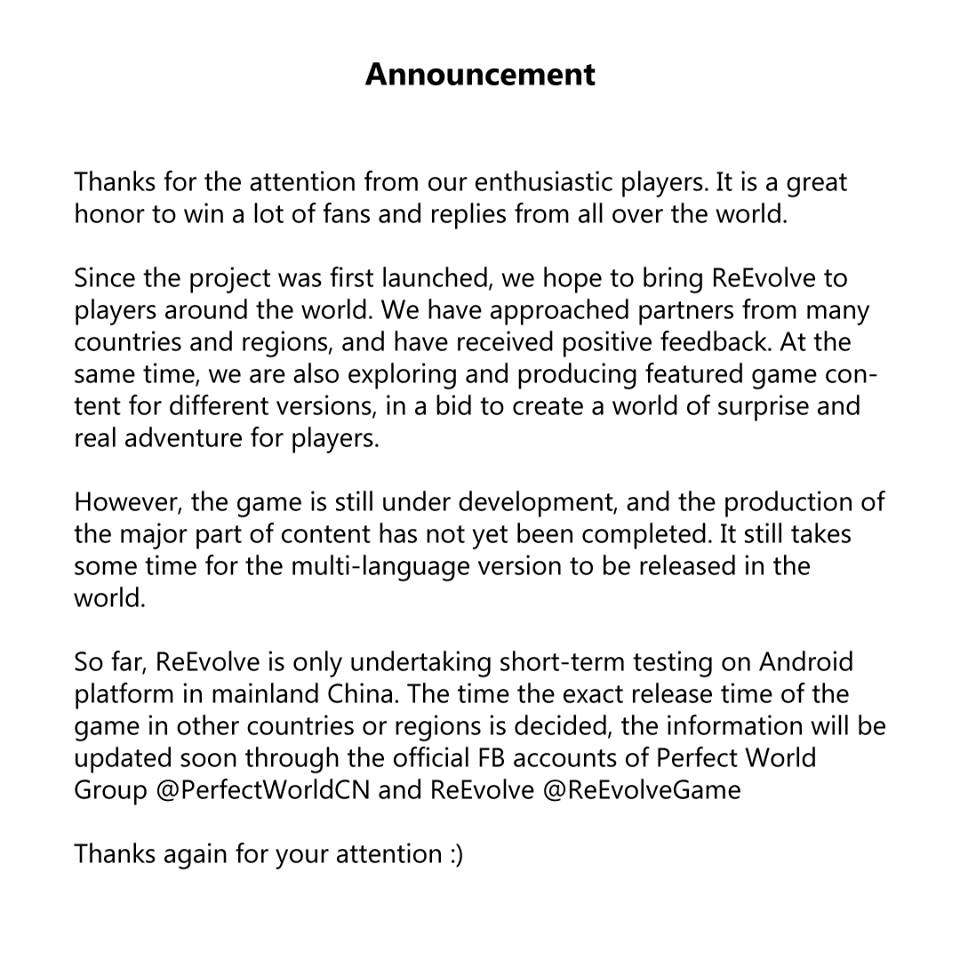 The Facebook page also has loads of lore tidbits and new screenshots and some videos too, highlighting everything from weather and pets to house construction and factions – we’ve rounded them up below!

ReEvolve – Lost in the wonderland

� A new sandbox MMORPG survival adventure mobile game "ReEvolve" NEED YOU NOW!!!🕵️‍♂️Have you ever get lost in a wonderland? Well, we're not talking about that Disney movie or Avril Lavigne's song, we're bringing you "ReEvolve" which is actually still under development, yet the following video shows real in-game footage.Enjoy watching this heavenly wonderland, the beautiful scenery is pretty eye-catching and your exploration in this space could be limitless we guarantee you!

whose phone is gonna be capable of playing this?? outside of rich chinese whales and korean’s theres not gonna be that many other people who can run a game that looks like this

This looks pretty good for a mobile title!