Gamigo is announcing a big charity project today with Eden Reforestation Projects, which will raise money to plant trees all over the world while granting perks to the MMO accounts of players in multiple games, from ArcheAge to RIFT to Trove and beyond.

“From today, gamigo’s numerous game communities will be taking part in the worldwide nature charity-campaign of Eden Reforestation Projects. For every purchase of a Garden, Grove or Forest package from gamigo, Eden promises to plant trees around the world. On the charity website, players can buy special packages with in-game content starting at 1.99$ per package. For every package worth 1,99$, 9,99$ and 19,99$, Eden Reforestation Projects promises to plant 2, 10 or 20 trees each. gamigo uses special leaderboards to record which community has the greenest thumb and how many players have taken part in the project in total. […] The cooperation between the gamigo group and the Eden Reforestation Projects will run for one month. Eden’s planters will not only plant trees in affected regions but will also receive a fair wage for their valuable work thanks to the support. For each Garden, Grove and Forest package, players will receive valuable in-game items.”

Ahead of the announcement, we spoke with Gamigo COO Jens Knauber to discuss the charity and how players can get involved – and benefit in-game themselves.

MassivelyOP: How long has this cooperation been in the works? I’m asking this because at first glance our readers might think this is a weird time to be saving the trees since the world is in the middle of a pandemic – but Arbor Day is coming up [this] month, and I bet this partnership has been in planning for a looong time, right? What made you folks pick this type of charity work? 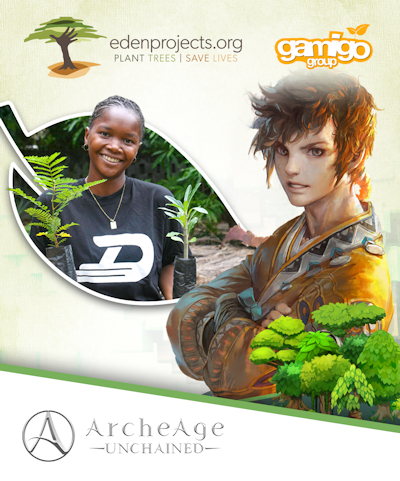 Gamigo COO Jens Knauber: We’ve been planning the cooperation with the Eden Reforestation Projects since late 2019 when nobody expected anything like the Corona crisis. Today, it dominates our lives, and trivial everyday problems pale in comparison to this global pandemic. Still, like Corona, the environmental crisis of deforestation remains as threatening as ever, that is why we will continue our cooperation with Eden.

Eden Reforestation Projects is a non-profit organization based in California, USA, committed to restoring healthy forests. Employing local villagers in project nations, Eden not only plants grows and protects millions of trees each year, but they also help reduce the extreme poverty in those regions by providing a life-transforming wage. Our idea behind the cooperation with Eden is that the players can enjoy our games while also doing something good for nature.

Which games specifically can players participate in this event? If there are Gamigo games that aren’t going to offer in-game items and boosts for participation, or if non-players want to donate directly, is there a way for gamers to do that without playing the core games?

Altogether, 19 gamigo games are taking part in this charity campaign. Among them are gamigo’s most popular titles, like the fantasy role-playing games ArcheAge and ArcheAge: Unchained as well as RIFT, anime role-playing games such as Aura Kingdom, Twin Saga, and Grand Fantasia, our MMO shooters like Ironsight and Wolf Team, strategy titles like Desert Operations and of course the cube MMO Trove! So there is something for nearly every player community here. Players can, of course, donate directly to the Eden Reforestation Projects and support the helpers around the world in their valuable work.

Do we have any way of knowing where the trees will be planted? Say, if someone wanted to go out and take photos of the trees we helped plant as they grow?

Eden is currently planting trees in a variety of reforestation projects in Madagascar, Indonesia, Nepal, Kenya, Mozambique, and Haiti, so it will be difficult to point to a single location for the planted trees. But players can check out our global leaderboard for live updates during the event to see how many trees Eden will plant in total!

What specific in-game rewards can participants look forward to? Please tell me they are in-game trees and plants for RIFT and Trove and ArcheAge housing!

In each participating game, Garden-, Grove- and Forest packages are on offer. Our teams have selected special items and boosts for the packages in each game. A Garden package in RIFT includes different items than one in ArcheAge. Speaking of which: ArcheAge’s Eco-enthusiasts can look forward to receiving Arcane Mystery Boxes. I don’t want to spoil much, but… there are trees in the boxes, too! For the Unchained version, we offer upgrade tickets for the Arche-Pass, among other awesome things. In Trove, the charity packages include Party Animals, Greater Dragon Caches, and Chaos Chests. RIFT players gain a lot of experience, credits, and prestige while also doing something good for the planet.

And speaking of Trove – Trove just dropped an entire gardening expansion last year. Any plans for a tie-in with that?

Items from the Gardening-Update, unfortunately, have proven to be unsuitable for this event. However, you will still find an excellent selection of items in the three Trove packages while helping Eden with their “gardening” activities, and use your green thumb in your own Trove garden afterward.

We’d like to thank Gamigo for speaking to us about the charity! You can learn more on the official website.