Let’s talk Delirium! We’re in the third month of Path of Exile’s latest league, and with the next league expected in June, we’re running out of time to do so. And Delirium is definitely worth discussing.

END_OF_DOCUMENT_TOKEN_TO_BE_REPLACED

Wait a minute MJ, you’re thinking. Is this a first impressions piece at the end? Well, yes and no. It’s more like final impressions. I don’t do first impressions pieces for POE because I honestly don’t feel that this type of commentary is works well for this game — at least not by me. It wouldn’t be fair. Unlike MMOs where you can take a character you already have into new content, Path of Exile’s leagues require you to continually start over. And I wouldn’t change that: It’s part of the winning formula! But it also makes giving initial reactions to content difficult when some content is farther along than I can get to quickly. Instead, I play through and experience the game at my own pace and then we can chat about it. Or maybe I am just a contrarian! Either way, let’s chat about one of POE’s most popular leagues and delve into the madness that is Delirium.

A merry time in madness

As Metamorph was ending, I wondered if I could take my newfound knowledge and experience from that league and enjoy Delirium, a style of league I wasn’t the most comfortable with. Did I? Yes, I really have enjoyed the league! But I think that has more to do with Delirium itself. (Though being more comfortable with systems certainly didn’t hurt!) 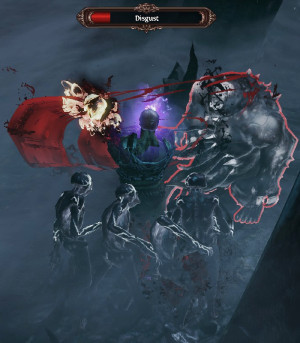 For starters, I couldn’t help but love the atmosphere. Spooky land shrouded in darkened mists? Oh yeah! Massive eyeballs following your movements? Nightmare morphing mobs of creepy crawlies springing up around you? Yup, my kind of ambiance. I took pleasure in seeing which bits of insanity I stirred up. Is it rage? Malice? Disgust? Maybe Fury, Turmoil, or Spite? There were always plenty of demons. I felt a certain glee running about in the swirls and transforming things into these ghastly beasts to hack down. And hack them I did: I took my first steps as a Marauder in Delirium, and the league felt better for having a melee to charge in and bash things face-to-face. Perhaps this also contributed to feeling more at ease in this league.

As much as I loved it, however, mood alone wouldn’t have propelled Delirium up the ranks of leagues I most enjoy. No, the actual gameplay did that. While I am usually overwhelmed by the timed leagues where you get instantly swarmed, I felt that Delirium was paced much better. First, I entered the challenge when I was ready (with a few accidental exceptions), so I didn’t feel thrust in and unprepared. Next, the mobs weren’t so crowded that I couldn’t see ground space. When it is that packed and I can’t move I get too flustered and can’t hardly think. Instead, Delirium let me move freely, hunting down the creatures. I controlled the speed of how fast or how slow I went, thereby allowing me to appreciate the mechanic without getting overwhelmed quickly. It was just enough madness to be entertaining. It was a brief window of hard mode, one I felt capable of handling. I also appreciated that there were familiar mobs from the zone — imbued with new abilities — on top of the new monsters.

I am not alone in my appreciation of Delirium: It has turned out to be the most popular league (as per Grinding Gear Games). Having more people at home with game time surely contributed to those numbers some, but if folks didn’t like a league they didn’t have to play, so I am thinking high numbers indicates more folks enjoying it. I look forward to seeing the exact numbers when I next talk with Grinding Gear and comparing them to previous leagues. But it definitely seems like the studio hit a home run with Delirium.

Has this league been a total bed of dead, insane roses? No. One patch in particular that nerfed an overpowered notable caused more than a few unhappy players who voiced their displeasure. Perhaps much of the frustration came from GGG’s initial declaration that it wouldn’t be fixed until next league, but it was in fact fixed after the studio realized how impactful the problem was.

Even giving myself until the end of the league, there were aspects I was not able to experience. While I definitely got the flavor, I couldn’t get far enough to delve into the Simulacrum, or experience the new Atlas and map changes in-league. I also didn’t get my hands on any of the new outer jewel sockets you can find. So I wasn’t able to form opinions on those mechanics as much as I think I’d enjoy them.

A dollop of disappointment

There was a dollop of disappointment in Delirium for me, but it has nothing to do with the league. Rather, it is centered on the way life conspired and kept me from experiencing the full story of Delirium myself and discovering the final boss. Finally there’s a little mystery to uncover in Path of Exile and I missed out on doing that; I have a hard enough time getting far in leagues in uneventful months, I had no hope in a quarter that included buying a house and packing to move in real-life! But that doesn’t stop me from aching to know: What — or who — is driving exiles insane? And why?

There have been some fun speculation and theories about who the threat would be. Zana was one, as she keeps tossing exiles into the maps to go mad. I especially liked the twist in this theory. While building up to Tangmazu, this theorist suggests that perhaps players will face a mirrored image of themselves (like you see at the event entrance) instead.

I truly hope that with the popularity of this league Grinding Gear Games will keep aspects of Delirium in Standard league once it closes. I especially would like to see a way to to weave through and learn the story for all those who didn’t have a chance to do so during the league and for all those who have yet to play the game. There’s no reason to let a good story go to waste, right? That will certainly be my only opportunity to know it first hand.

Of course, I wouldn’t mind if the story came out as an actual story to read through and enjoy. The Tales of Madness! I’d read it.

I wonder how much of the “popularity” is due to the league mechanic or simply COVID quarantine.

Anecdotal, but I hated this league mechanic…4/10…

For a majority of players it appears the super fast speed smash em is the favored mechanic, shown by all the leagues. Me, I still love the odd ones that don’t fit that bill =D