“Crafting in Star Wars Galaxies was the greatest thing ever in MMORPGs.”

How often have you read a comment like that? I know I’ve seen remarks similar to this one cross my eyes on a variety of comment sections and social media. It’s been mentioned so often that it’s kind of easy to brush it off as a meme at best or the aged growlings of a bitter and jaded MMORPG player at worst.

However, as someone who is wholly new to SWG, I can honestly say with confidence that it’s true. All of it. 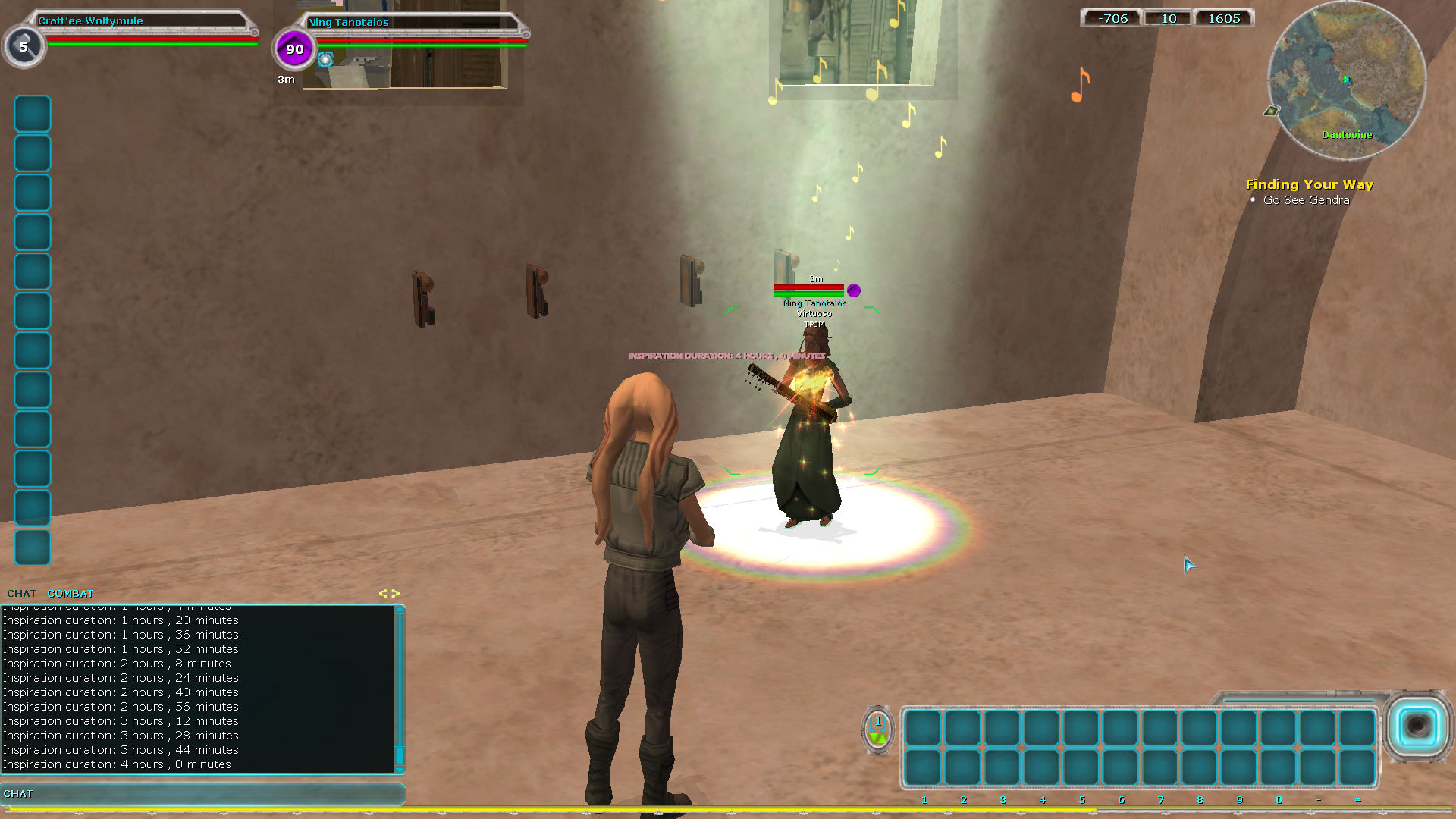 It didn’t start out looking that way, if I’m honest. My very first task as a newly minted Structures Trader in the Legends rogue server was to grind out the 90 levels, which seemed like a daunting feat except for the fact that my benefactor Bree provided me with an absolutely astonishing wealth of materials, a performance buff, and a guide to the mountaintop like a Sherpa. I also made sure to tap into my other reliable fountain of knowledge, the Napyet Gaming YouTube channel.

Armed with knowledge, buffs, mats, videos to watch, and IRL snacks to munch, I was able to absolutely bulldoze through the 90 levels in only a few hours. That makes the whole leveling process seem pretty trivial, and it is, but it was also that sort of welcome, mindless, meditative grind as I utilized Practice Mode to soar upwards in CL (combat level, though I’m not entering combat; go fig) to the very top. This all speaks to the absolute mastery that this game’s community can share. I sort of wish there was something that could be similarly done for combat classes, honestly.

During my time grinding out the levels, I also got to experience first-hand Bree’s astonishing crafting empire as well as her housing skill. She’s made a gorgeous-looking tea house as well as an interesting little shop, both of which are jam-packed with decorations from wall to wall, and she has a series of extremely orderly and carefully laid out factories that probably would spread out further if there weren’t other buildings nearby. Both of these got me extremely motivated to hit the top. 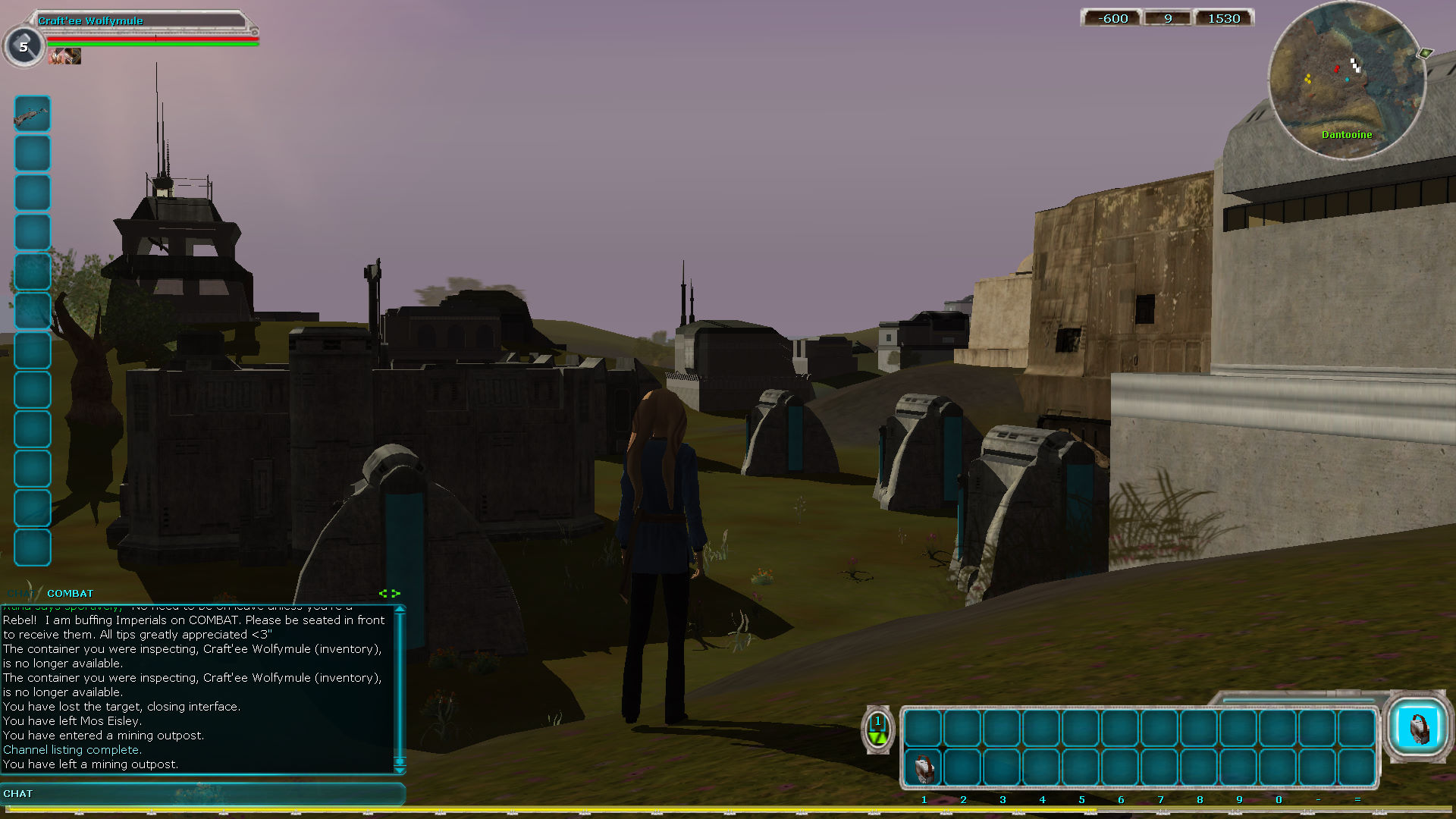 After a couple of nights, I was now at the pinnacle of crafting, which meant I had a bit more research to do. Initially I had designs to become a Shipwright because I love the idea of building spaceships, either as an actually lucrative trade or as a sort of means to build a personal collection like some retiree making kit cars in his garage, but it was slowly becoming apparent that doing that from the very off was probably not wise owing to the apparent complexity of the profession. So, in spite of my grumblings, I’ve decided to focus on creating furnishings and architect things. For now, anyway.

I hadn’t really gotten too much time with either of those, but I did at least dig in a little bit to get the general gist of crafting, and just scraping the topsoil of this fertile land was already intriguing. Quality of materials matters. The equipment being used and worn matters. The experimentation system, which apparently helps in creating some unique and potent items in certain cases, matters. The whole process was both easy to dig in to and daunting, like seeing the edges of a well clearly and then looking down into its yawning depth that goes beyond the light overhead. 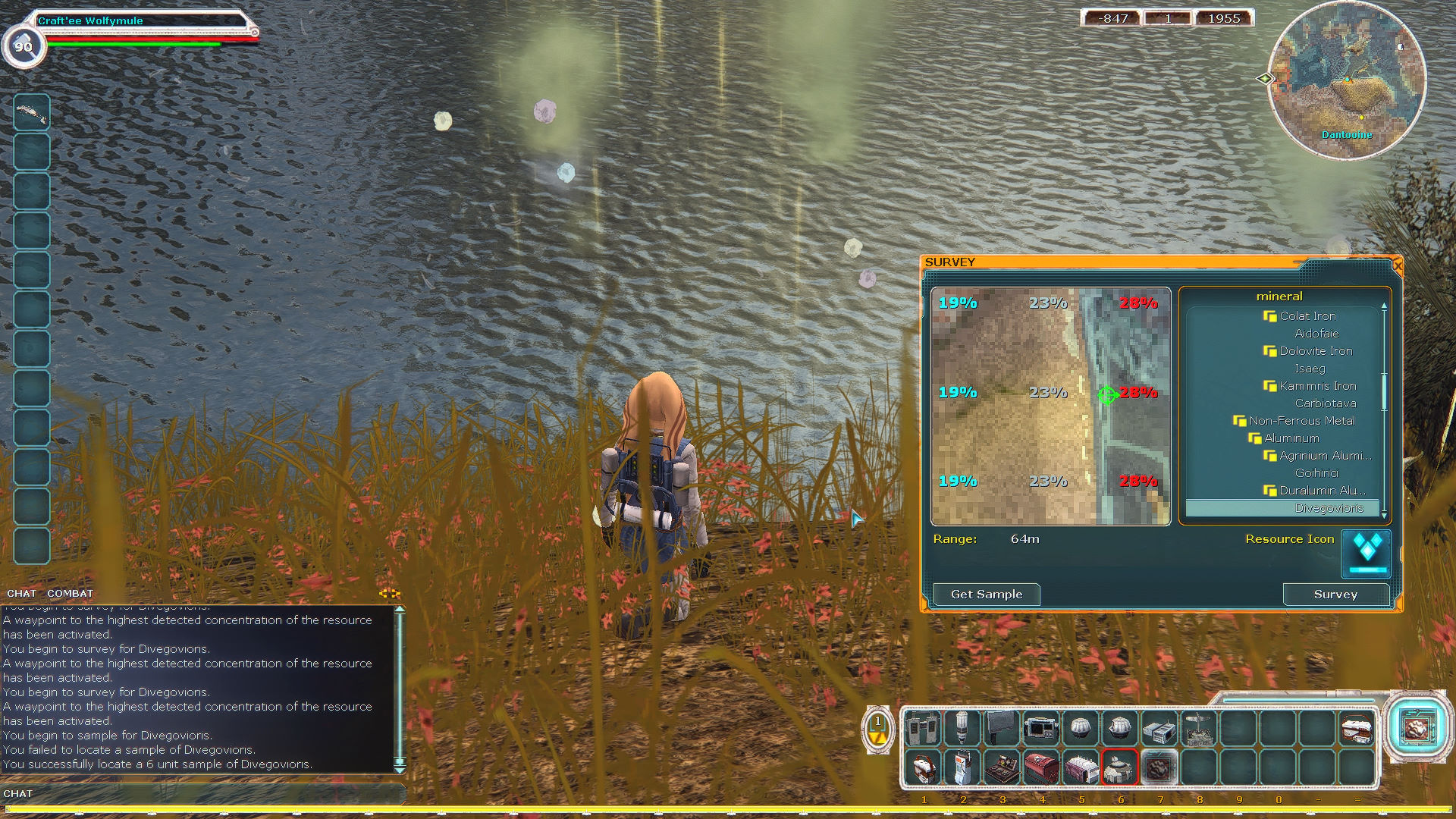 I also made sure to take a moment to investigate just how it was Bree dredged up all of those materials for my leveling grind, and once more I was astonished at both the system’s balance of complexity and ease. After making myself some survey tools, of which there are several types, I started roaming around Dantooine scanning for a mineral I elected to choose at random. Scans returned areas where the percentages of finding what I wanted were listed on a minimap, and harvesting the resources was a simple matter of kneeling in place and apparently setting off several small explosions. This amused me a bit, especially since I was mostly extracting resources via small bombs near other people’s houses.

Don’t worry, no houses were harmed.

Once again, little things matter here. Specifically, the higher the percentage, the more units of material I was able to get. That probably should have been obvious from the get-go (and from Napyet’s tutorial video), but I was surprised at just how much of a jump in yield I got from sampling in an area that had 12% yield to an area that had 25% yield.

Occasionally, my survey device would create a pop-up that would guide me to a nearby area that had higher concentrations of mats, which was a nice change of pace; materials gathering itself is a largely passive affair much to my dismay, and having a reason to not just take a knee and blow things up was welcome. As hands-off and simple as it was, though, there’s still a pretty vast depth to all of this too. I can’t even begin to wrap my head around the differences in materials and how they affect my ability to craft better things. 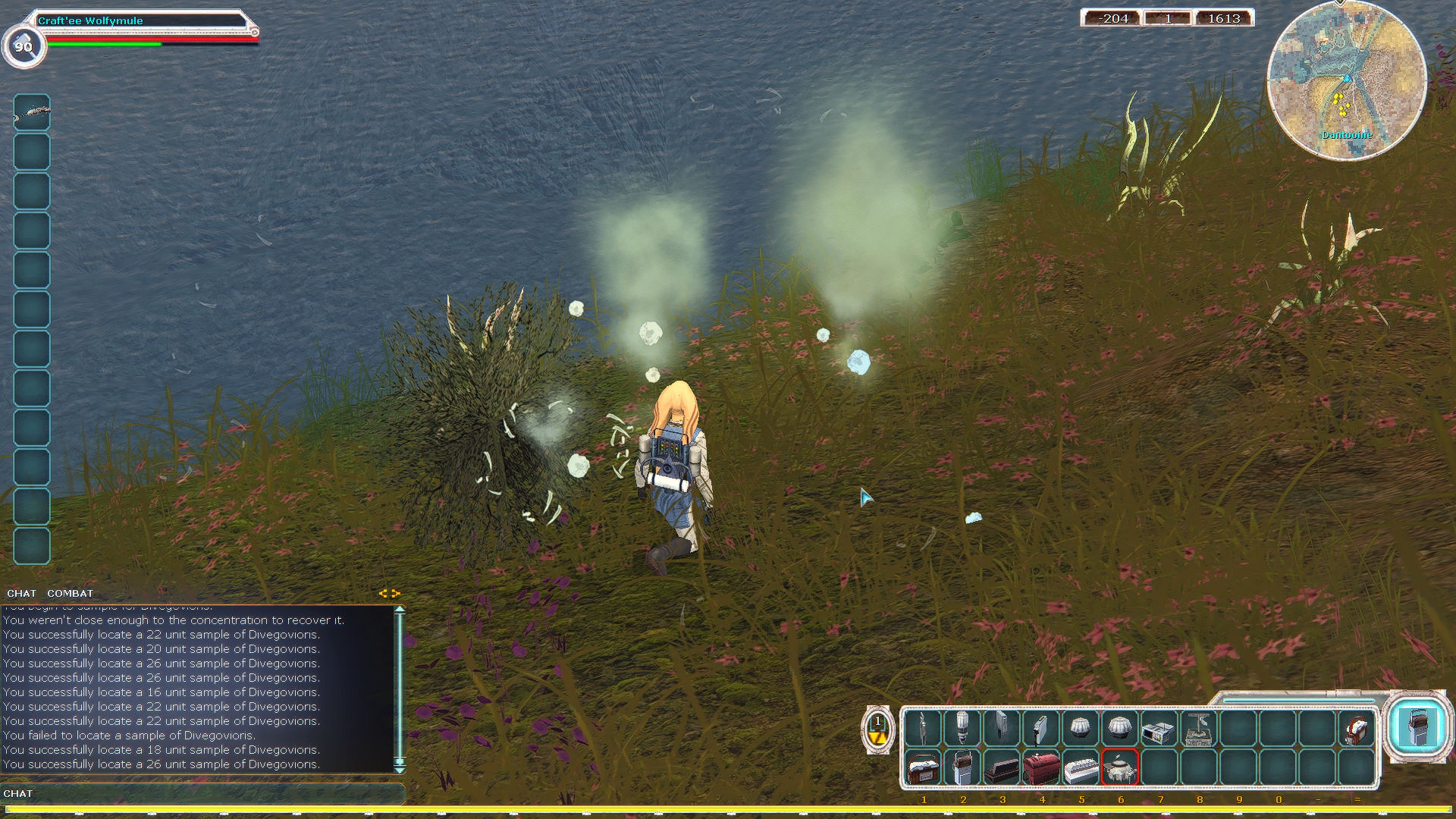 It’s genuinely astonishing to realize how much SWG got so right when it comes to crafting and gathering gameplay. All of this felt both involved and easy, or to put it another way, kind of simple to learn but undoubtedly hard to master. It’s some of the more engaging parts of this game as well as the most invested I’ve ever been in crafting since FFXIV 1.0. It really is no joke at how fascinating this whole thing is. In fact, if you stripped away all of the Star Wars nonsense, removed all of the combat, and expanded on these systems by adding things like player-driven logistics and commercial management or market running, you could make an MMORPG out of just this easily.

In short, consider me hooked, intrigued, excited, a bit confused, a bit more scared, and altogether taken in. This is the sandbox right here. This is what everyone talks about and why. I think I’m starting to get it now. No other game comes close. Seriously.

That said, it’s time for this week’s poll question, and I want to start off by saying that I don’t necessarily want my intrigue to steer all of the voting here because the other facets of this game that are up for polling are also of interest to me. Furthermore, I should point out (warn?) that whatever option is picked for this week, the other two will be part of the following week’s poll. With that all said, here’s what I’m looking at trying next.

What should be the focus for SWG Legends this coming week? 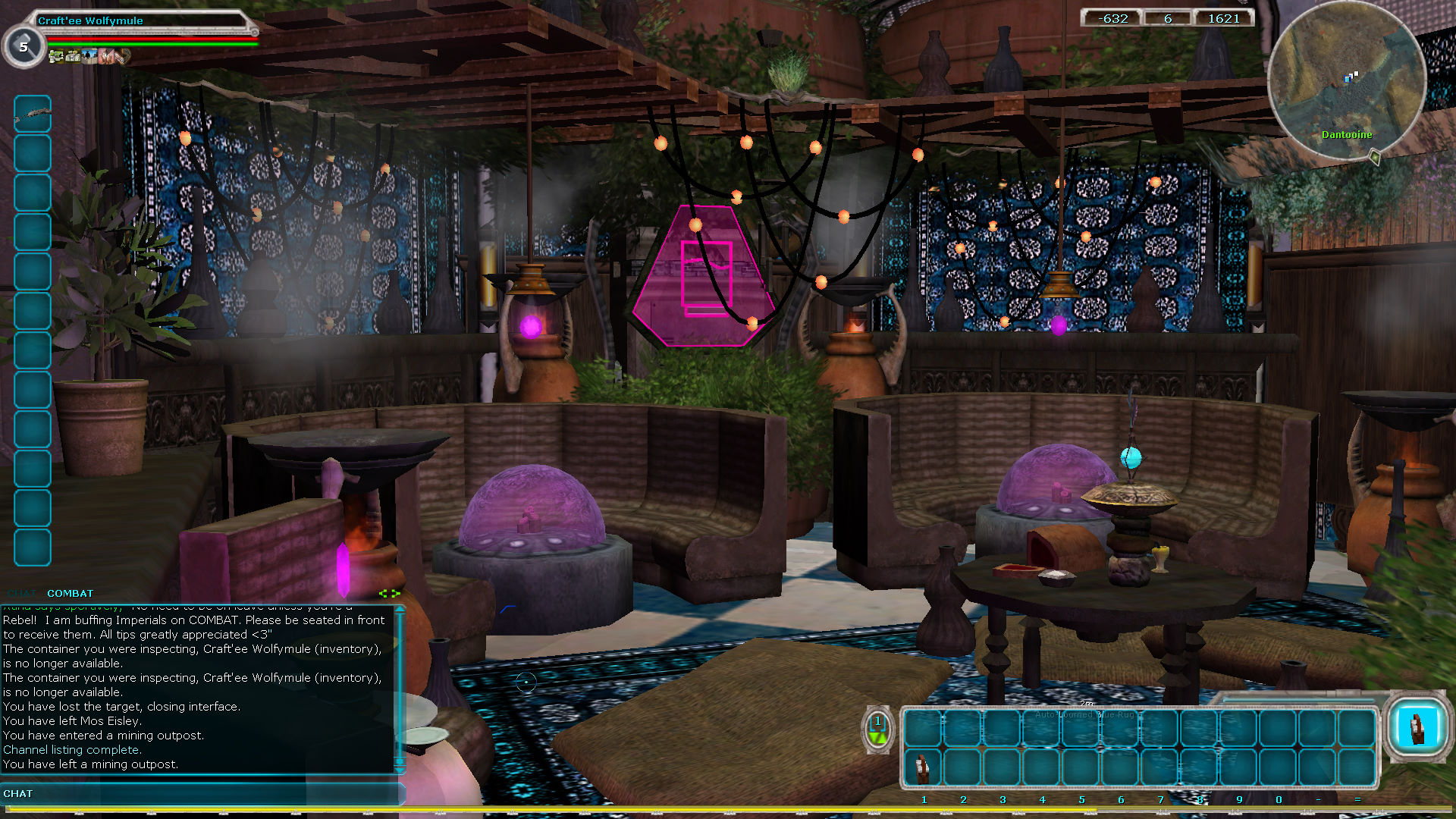 As usual, polling will wrap up at 1:00 p.m. EDT this coming Friday, June 18th. In the meantime, it would seem like I’ve got some more research to do and more resources to find. Weirdly, the amount of community guides for Legends-specific gathering seems a little dated or disjointed. But then, that’s part of the challenge, isn’t it?