Hold up, the End of Dragons expansion of Guild Wars 2 is getting siege turtles? Like… giant tortoises mounted with siege weaponry stomping onto the field of battle? Where can I get one? How do I get one? Ideally, those questions will be answered in the series of livestreams ArenaNet has lined up to showcase various features of the upcoming expansion.

END_OF_DOCUMENT_TOKEN_TO_BE_REPLACED

On Friday, October 22nd, there will be a preview of the expansion’s third beta (which we assume will include at least one of the final elite specs, as one of the two final elite spec beta events is slated for October 26th), followed by a tour of the Echovald Wilds map on November 12th, a tour of the Jade Sea on November 19th, and a look at siege turtles in action on November 24th. Other livestreams are scheduled through February, with the big one for GW2 fans happening on Friday, December 3rd, when the devs will be having an overview of End of Dragons features, with looks at a new guild hall, new story characters, and new legendary weapon variants.

The full livestream schedule is available below and can be expanded by clicking the image. Which is good because it not only lets you read the dates easier, it also lets you look at the siege turtles more closely. 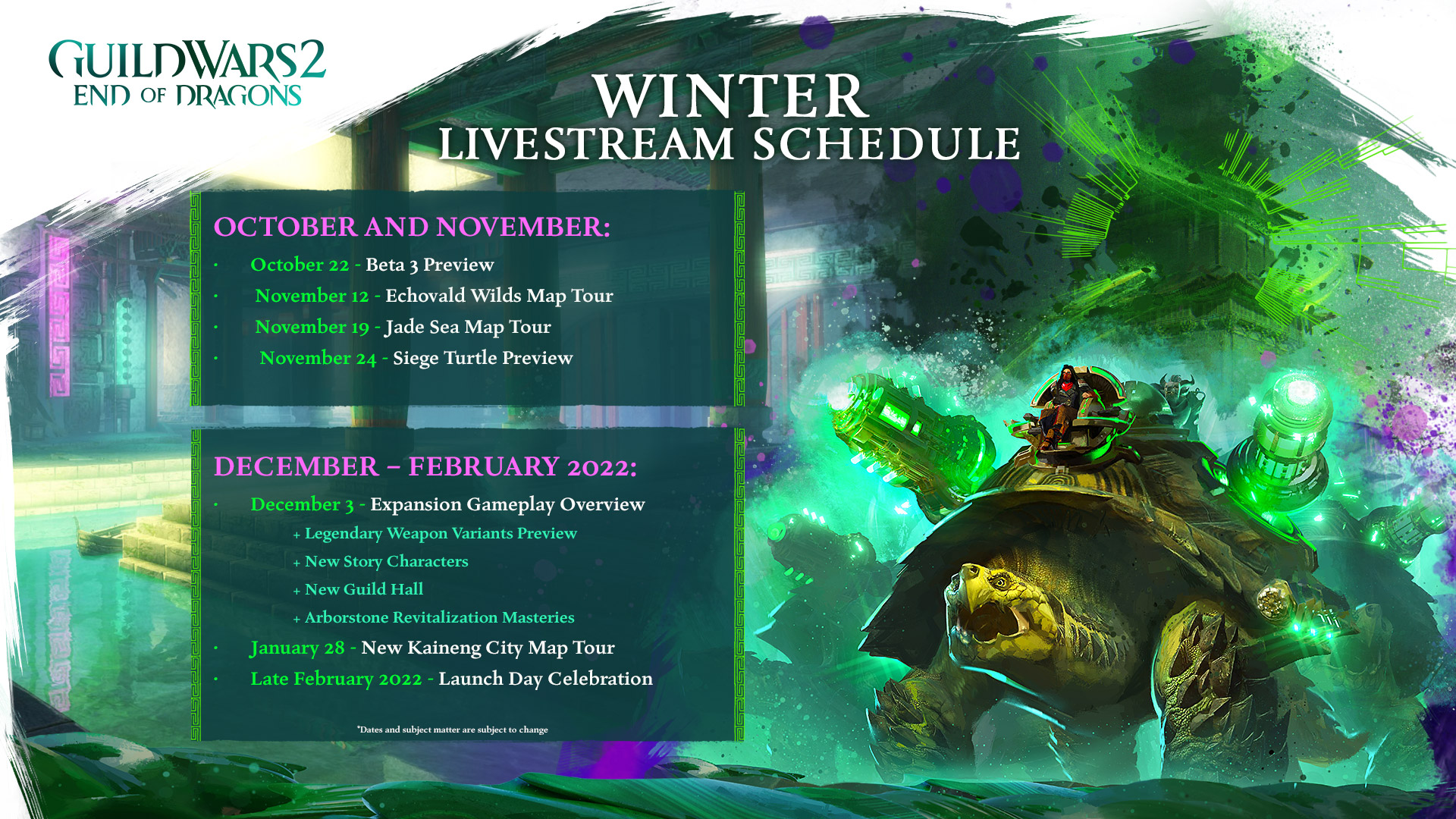 Now we know there are at least 4 maps, and the names for each of them. Echovald “Wilds” and “New” Kaineng City hint at how these areas have developed over the past 250 years.

So, those are the features.

Yeah. I get Anet being constrained with resources and all, but it doesn’t appeal to me anymore. I feel like GW2 will always be the “log in for 2h” MMO, and i don’t like it. New World helped drive a nail into that coffin but the coffin was there already.

The live events keep you in there longer though, hell I never finished Season 4, I just logged in and clicked my World Boss Store item and did the events associated with the boss, had a lot of fun.

Until they stop keeping you in there because GW2 event system is a giant hamster treadmill that gets you really nowhere.

My issue with GW2 is how i don’t feel in the world. I’m not part of it. The entire gameplay loop reminds me more of a checklist than actually forging my destiny. Yes, this is a issue with MMOs as a whole nowadays, but when GW2 embraces the “this game is good to play for 2h”, it kinda goes further imo.

What is there to do in GW2 as a long term achievement that is not farming achieves, getting a legendary or self-appointed objectives? Because the way i see it, the game lacks what i’ve been asking for years: Perpetual systems that make you WANT to stay logged.

How do you not know this Battle Turtles were shown in the very first Live Stream?

I mean, we do know, since we covered it in July. Anet didn’t spend much time on it then, though, and haven’t since either, so it’s definitely drifted off the radar of people who aren’t hardcore GW2 players.

I can’t quite put my finger on it, but my expansion excitement has died down considerably over the past month or two.

Like, looking at this schedule the only things I’m really interested in are the Siege Turtle preview (to see what it is beyond a co-op mount) and the “Arborstone Revitalization Masteries” to get a feel for how they’re going to approach that system in this expansion.

Everything else I’m kinda “meh” about : /

I’m sure I’ll play it at some point, but it’s very hard to play any other MMO after playing in the world of New World (so so pretty). I imagine it’s like trying to go from Heroin back to Pot or something.

I think that a lot of people lost their excitement for EoD when they saw how mediocre most of the new Especs are.