Back in 2019, veteran MMO developer Raph Koster announced he was finally making a new MMO. In the ensuing two years, he’s raised millions of dollars from investors, promised to build a real functioning metaverse platform, and teased the MMO itself, which through his articles appears to be just as sandboxy as his past MMOs. As he’s put it, it’s a “modern sandbox MMO” that “fulfills the dream of living worlds that we’ve all had for a couple of decades now” and is “built atop a modern, re-usable, scalable platform.”

There’s a lot we don’t know about the game, however, including what it’s called and what it will look like. In fact, that’s something we teased Koster about earlier this fall; he responded with a 5-pixel tall image as a joke. But we won’t have to use it again, as today, the Playable Worlds team is taking the wraps off some of its concept art, and it’s given us an image to sneak it out early to our readers who’d been patiently following the game since its first tease. Behold: 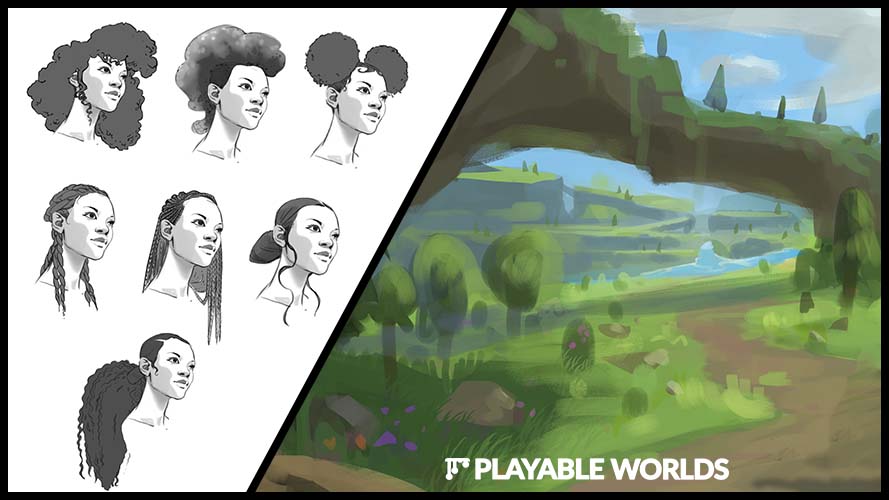 Koster’s team is quick to point that this is concept art that may not reflect the final product. On the left is early character exploration art, and on the right, early environment exploration concept art. Based on what Koster’s said in the past – that his team is “reasonably far along on building” the game – we assume these are early indeed and merely the tip of the iceberg for a teaser campaign, but we’re not sorry to see it.

Speculation, of course, is expected; the painterly landscape could hint at a fantasy-esque, Earth-like pastoral setting, while my newsroom is chattering excitedly over the range of multi-ethnic, modern hairstyles even at the concept art stage of design. The vibe evokes Palia more than anything, which makes perfect sense. Let ’em know what you think – is it what you expected?