Playable Worlds’ Raph Koster is back with another blog post that serves as a tip-off for what kind of MMORPG he and his team are building. And once again, if you’ve ever played a Koster MMO, you know what “E” word is going to be at the heart of it: economy. But Koster hammers over and over that the important part of the player economy in an MMO isn’t actually the money at all but the players driving it.

To explain why, he invokes his own “trust spectrum” research, suggesting that people move up and down a ladder of trust and intimacy levels based on relationships – even relationships between strangers and acquaintances that are built on the exchange of currency.

“This often all gets boiled down to the phrase ‘a player-driven economy.’ And people think it means revenue models and monetization. Maybe, if they are savvier about online worlds, they think it means players make the items that other players play with – and that’s true, they can and do and should! But even that is still a reductionist way to think of it. A player-driven economy isn’t about the money. It’s about having every way to play the game serve a role in the ecosystem. It’s about all the wonderful and weird ways we choose to live and play, and how we find out that our silly hobbies are vital necessities to someone else. In the end, it’s about making everyone important. Because we all are. Important. Plumbers, baristas, roleplayers and raiders.”

The piece also suggests that the game will raise up “the players who make the world come alive” like the strategy guide writers, the roleplayers, the explorers, the streamers, the crafters, the entertainers, the decorators, the fixers, the builders, and even the guild leaders, unlike most MMORPGs that cater strictly to, well, murderhobos. One thing this game is not going to be? A gankbox. “[W]e’re not interested in building a ‘gankbox,’ as some call it,” he says. (It’s us. We’re some.)

Finally, while it’s basically impossible to read (Koster, you tease), there’s a “map of the economy of the game,” which at minimum suggests this game is going to be a lot more than just your typical MMO grinder. 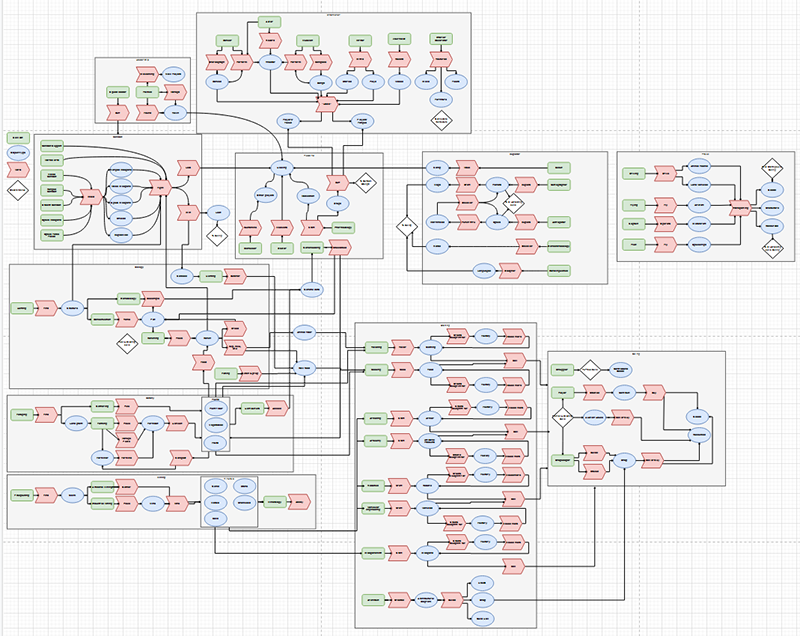