So Star Wars: The Old Republic fans are exploding on the internet about the franchise’s latest expansion, Legacy of the Sith. As a player of the game for 10 years, I have a lot of people asking me what I thought of it. But I think the more important question is why are fans up in arms about it. Because I really want to get into the meat of the controversy, I’ll just tell you my hot take: The story was good, some of the combat changes were good, the UI was bad – very bad. So can we talk about what players are upset with now? Good. Now things are going to get interesting.

END_OF_DOCUMENT_TOKEN_TO_BE_REPLACED
Following the Spirit of Vengeance update, which has now been more than a year ago now, the team at BioWare has hyped up its 10-year anniversary along with the new expansion Legacy of the Sith, which was to heavily feature the fan-favorite bad-boy Darth Malgus and continue the Onslaught storyline. Of course, the world experienced an unprecedented global pandemic in the middle of production for this expansion, so many fans gave the developers a pass on the content slowdown, even though updates were already getting smaller and further between.

But surprisingly, that was not the biggest complaint from fans. Let’s break down some of those issues. As with any controversy, there are multiple different perspectives, and hopefully we can shed some light on the situation.

By far the biggest complaint about LOTS is the size, or more specifically, the amount of time that it takes to finish the main content. For myself, it did take me more than four hours to complete, but bear in mind, I was interrupted quite a bit. I was doing my best to take notes and pay attention to many of the nuances of the story. I believe that my experience was likely atypical. I would suspect that those players who say they were able to complete the entirety of the expansion in two to three hours were telling the truth.

(Side note: Can we call Legacy of the Sith LOTS and pronounce it like “lots?” Given the controversy, I find it ironically funny.)

SWTOR has never been the pinnacle of prolific products. Most of its expansions have been underwhelming when it comes to their length, but this expansion seems to be especially underwhelming for many of its fans. I believe three factors play a major part in raising the fandom’s ire: the hype, the delay, and the timing. 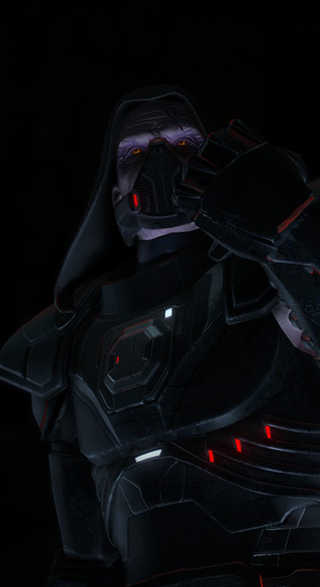 We are sitting within the 10th year of SWTOR. For any MMO, that is a long time to retain a solid fanbase. Granted, some of that is reliant on the IP of Star Wars for a couple of different perspectives. You have new fans coming into the fold because they are into the latest movies and the Disney+ series, and as it was put in MJ and my livestream chat last night, SWTOR is the last official vestige of the beloved Expanded Universe canon. The timing of this expansion is ripe for high expectations. No matter how you slice it, 10 years is a long time, and even casual fans are looking for something spectacular to celebrate the occasion.

In the same vein, EA and BioWare have pushed this expansion as something to really look forward to. I have not seen this level of interview inventions since the Knights of the Fallen Empire expansion, which was six years ago. Not only that, EA tossed a lot of money into creating a Blur cinematic trailer. Many fans found these tactics misleading if not outright deceptive. From my point of view, those fans have a point and right to be upset about the situation. Project Director Keith Kannig, to his credit, did attempt to run interference and manage expectations on livestreams and interviews by telling fans that not everything would come out at once and content would come out incrementally throughout the year. Of course, that was lost in the noise.

Most of the time, delaying an expansion softens the hype surrounding a launch. In fact, anecdotally, I have heard from producers that delaying a game’s launch or an expansion release will decrease the ultimate sales. I don’t know if there are actual statistics on that or how they would even be measured, but even the fear of lost sales could scare a studio into launching a game or expansion before it is even ready. However, just before launching LOTS last December, BioWare announced that it was delaying the expansion until February – a two-month delay. Many fans, including me, praised BioWare for not releasing anything until it was ready, but that also served to give the impression that the expansion was big and BioWare had a lot to fix.

Despite EA being a giant corporate monster, BioWare Austin has maintained the atmosphere of a small studio that enjoys telling good stories through the medium of video games. I have no qualms about criticizing BioWare when it comes to game development, but I always attempt to maintain that I am talking about designers who love making video games and consider themselves extremely lucky that they get to work in a franchise that they truly love. From the top-down, the creators are fans of the game they are creating, and I highly respect that and individually respect each one of them. This respect makes me give a side-eye to those who complain about the length of the expansion.

I totally understand that there is an expectation surrounding the term “expansion.” I would define an expansion as a significant level of content that progresses or changes the game to the point that it could possibly be a game on its own. I don’t expect mechanical changes, but that could be part of it. I don’t expect time jumps or changes in the narrative landscape, but that could also be part of it. In television terms, an expansion would be the next season. There is no way that I can say that LOTS lives up to be the next season of SWTOR.

However, let me introduce you to two caveats.

Many expansions cost the player the same or slightly less than the original game, regardless of a monthly subscription or not. Setting aside the digital collector’s edition of the expansion, the expansion itself costs players only one month’s worth of subscription fees. If you’re already subscribed, then it essentially costs nothing. Knowing how much work goes into making a game of this level, regardless of length, players are getting a bargain.

I’m a bit more pedantic about the second caveat, and I apologize. BioWare made the game. It can call the addition to the game whatever it wants. Even though I would not call this level of content an expansion, I’m not going to tell BioWare developers that they can’t.

My bottomline is pretty simple: be critical with measured expectations. Politely criticize the expansion for what it is: a $15 addition to the game. Put aside the hype, put aside how long you’ve waited for it to come out, and judge the effort and quality of what has been put into the game. We can all measure the terrible marketing on its own merit another time.

Larry Everett jumps into his T-16 back home, rides through the hypergates of BioWare‘s Star Wars: The Old Republic, and posts his adventures in the Hyperspace Beacon. Drop him a holocom on Twitter @Shaddoe or send him a transmission at larry@massivelyop.com. Now strap yourself in, kid — we gotta make the jump to hyperspace!
Advertisement