“This is the start of a year’s celebration,” Star Wars: The Old Republic Project Director Keith Kanneg said just before showing the press the trailer for the next expansion Legacy of the Sith today.

END_OF_DOCUMENT_TOKEN_TO_BE_REPLACED
Of course, the question on every fan’s mind is when does this year-long celebration start? SWTOR launches its 10th expansion Legacy of the Sith on December 14th, 2021. Depending on which wave of early access you were in, it could be 10 years to the day of your playing the game for the very first time. Despite what you think of the game now, that is an achievement. And all the BioWare staff is excited to talk about what is in store for players over the next month.

BioWare invited me to speak with three of the key figures in bringing this expansion to life ahead of today’s stream. I spoke with Project Director Keith Kanneg, Creative Director Charles Boyd, and Community Manager Jackie Izawa about what players could expect from the new expansion. This being a BioWare game, the primary focus was on story, but I couldn’t help but throw in some questions about mechanics, too.

In the original Star Wars movies, the planets were interesting but were ultimately just monolithic biodomes. With television shows, books, and other video games, the planets eventually became characters in themselves. And in SWTOR, the correct planet can be paramount to the success of the story being told there. I don’t think I need to mention my dislike of SWTOR’s Dantooine again.

Izawa started her presentation with planets, so given the make-or-break nature of planets in SWTOR, that’s a good place for us to start, too.

When we first stepped onto Manaan in the leadup to the Shadow of Revan expansion, the idealistic ocean world introduced itself as “clean and pristine,” as Boyd put it. But “in Legacy of the Sith, that is not happening.” The Empire has invaded Manaan. It has been ravaged by the strong military arm of the Sith and turned into a bleak and stormy environment as the Empire attempts to gather all the kolto it can for its forces and prevent the Republic from gaining any more. 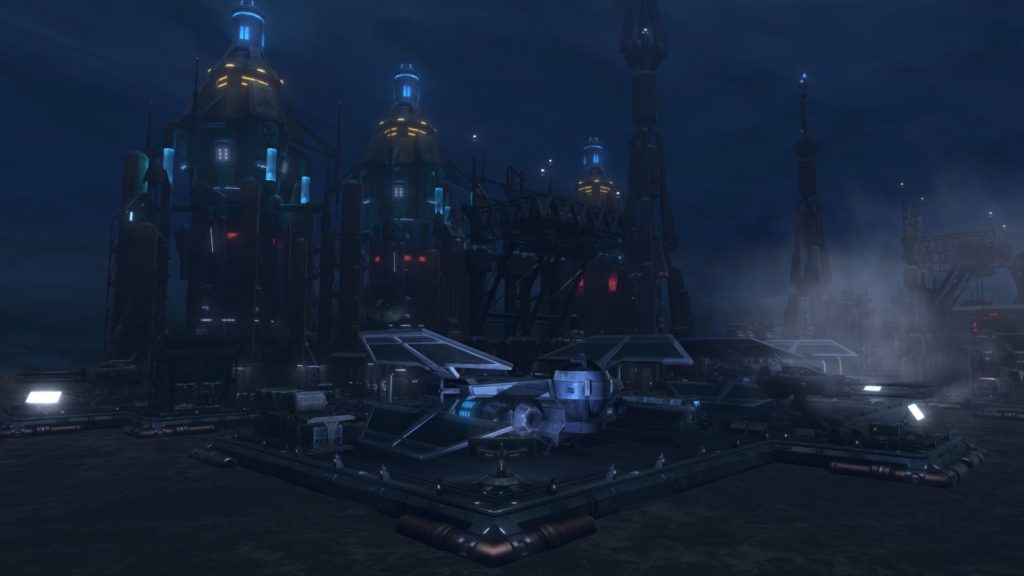 The idea behind having an ocean world is always interesting for a game without swimming, and one of the ways that the art team is keeping Manaan interesting and different from the last time we visited is by taking us underwater. The Imperial forces have created a base that really adheres to their way of doing things. “They are not going to adapt to the local environment; they are going to adapt the local environment to themselves,” Boyd said with a smack of his fist into his hand. Instead of building their base around the water or on top of it, they have built a dome structure beneath the ocean and drained out the water. According to Boyd, it gives the base an interesting visual aesthetic.

The planet Elom (not to be confused with Ilum) appears in the flashpoint for Legacy of the Sith. In the short mission Whispers of the Force, Barden Golah or Gnost Dural tells the player about an artifact that Darth Malgus seeks. During this cutscene, we learn that Arcan or the Voss Mystics should seek out this artifact in Wild Space. The artifact in question is said to belong to Darth Nul. According to Izawa’s presentation, Nul’s artifact is traced eventually to a hidden temple on Elom. 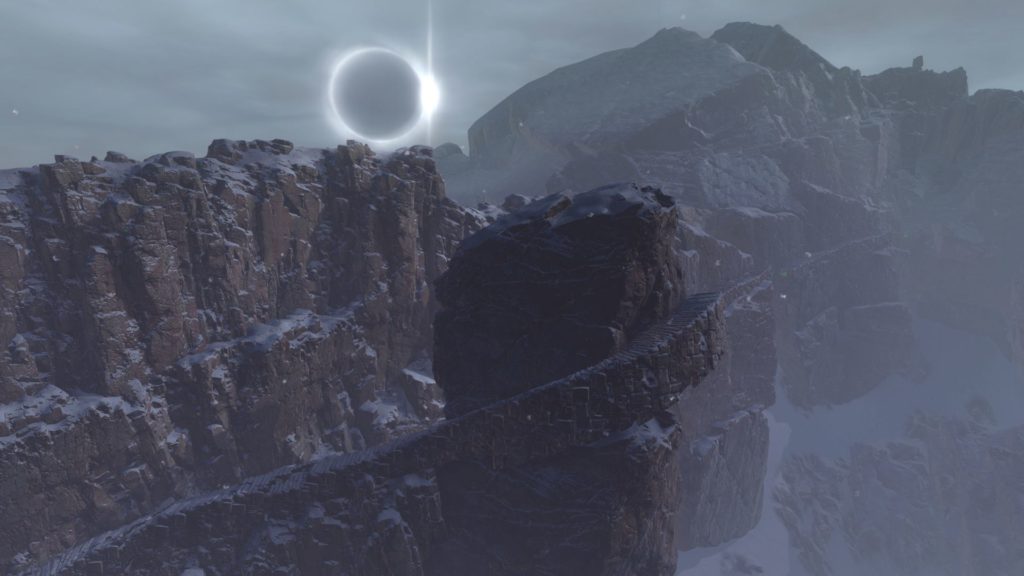 Izawa gushed quite a bit about how beautiful the planet is. Looking at the images that she showed, I would call it an interesting mix of the red-rocky areas of Ossus and the snowy peaks of Alderaan. Its most outstanding feature that no one seemed to mention is the celestial orb floating in the sky. I am unsure whether it is a moon with sunlight hitting it on all sides. Maybe it’s a dark star with light seeming to emit from the sides. My best guess is that it’s a satellite like a moon or another planet stuck in some kind of tidally locked orbit between the planet Elom and its sun. Regardless of what it’s supposed to be, it’s a dark, ominous orb in the sky surrounded by a halo of sunlight.

Many folks in the SWTOR community have been speculating that Darth Nul might be related to the Naddist Warb Null. Although the developers did not exactly lay that theory to rest, they did say that there are no records of Darth Nul anywhere other than Elom. Also, we are more than aware of Warb Null’s history. He was an armorsmith on Onderon who never left the planet and was ultimately killed by Ulic Qel-Droma while Null served under King Ommin, the descendent of Freedon Nadd. There is literally no way he could have survived, as Qel-Droma cut off his head. And no one in the Star Wars universe survives that… right, Lord Simus? 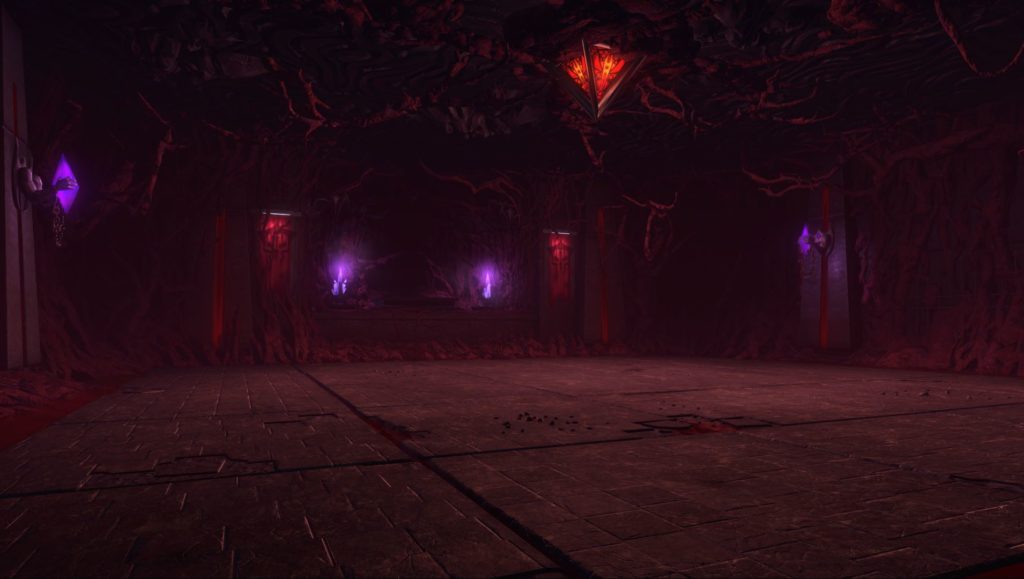 Izawa and Boyd also presented the operation called The R-4 Anomaly. I have included the screenshots of that operation, but because that does not launch with the rest of the expansion, I will hold off on saying too much because I have theories and other tids and bits that really deserve their own article. So I will leave you with a quote from Boyd about the feel of the operation: “It’s got a little more space-horror vibe. It’s still Star Wars. Still within that rating range, but a very creepy, very mysterious, very tense environment.” 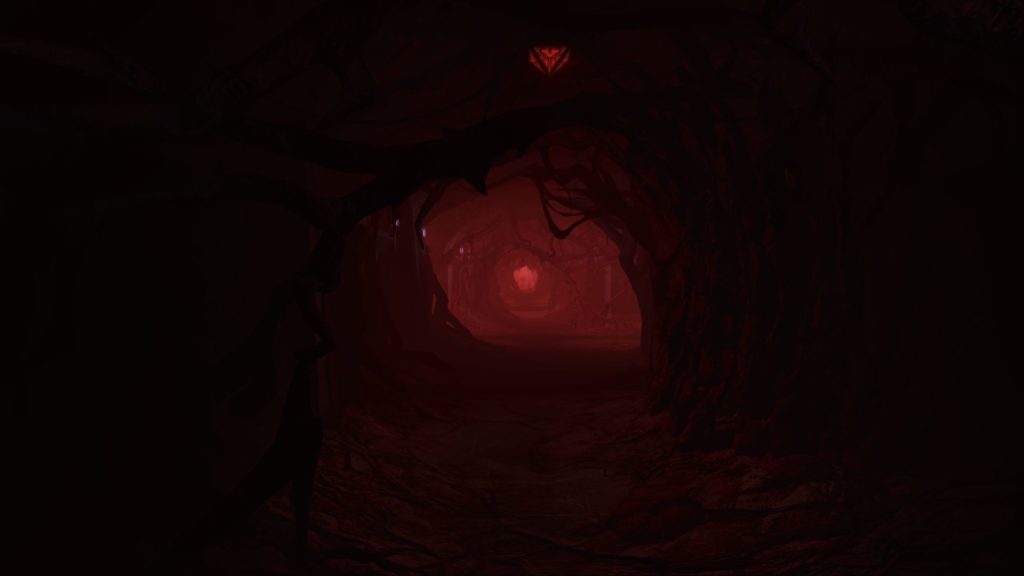 SWTOR players who have visited the test server and are testing out the new Combat Styles mechanics have mixed reviews of the entire process. I have not had a chance to visit the test server yet and try them out, so I will withhold my opinion for now, but I did learn something very interesting about Combat Styles and where they might lead.

Simply put, Combat Styles allow players to choose a story path mostly independent of combat mechanics. If you want to play the Bounty Hunter story, you can pick up Gunslinger abilities, as an example. Faction limitations as essentially turned off because it’s possible for Consulars to have Sorcerer abilities. I’ll go into more specifics in another article when I’ve had a chance to test them. 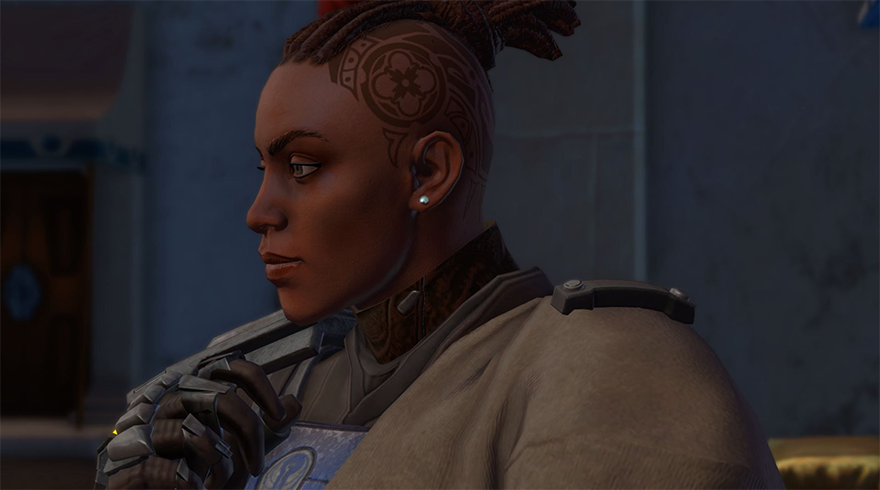 The lack of faction limitations with Combat Styles made me consider some of the other possibilities they had to offer and what seemed to be the most logical next step: Will we be able to fully switch factions soon? Boyd didn’t really dodge the question as developers have done before.

“The short answer is that’s something I desperately want as a storyteller to offer, which is why we have the sort of saboteur options, right?” he said. “We are moving that way. That said, much like Combat Styles, a change like that is so fundamental to how the game is built that it is a very dangerous, delicate thing to offer, right? It’s not purely about the story being ready for it. It’s about the game supporting it, and in this case, when it’s me as the creative director deciding what is the most important thing to pursue, I felt that Combat Styles was the most bang-for-buck thing to do right now because it opens up so much about the game. And [Combat Styles] also touches so many fundamental baseline assumptions that are in the code. It’s like, OK, let’s make that our thing we do that’s insane and really risky thing to tweak. And then we will circle back.”

Kanneg piped up by saying, “The key part is that that’s just where we are starting.” 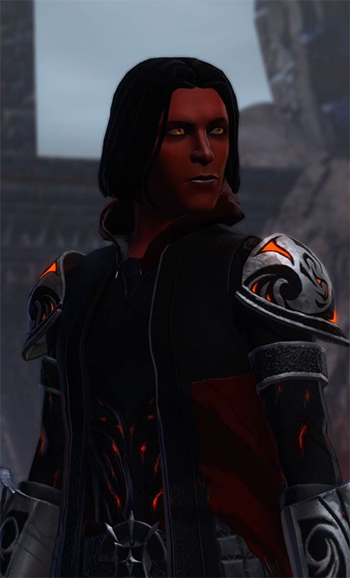 “You’ve been around a long time you’ve seen the evolution of the game,” Kanneg continued, “You can see what we are trying to accomplish: Give you as much flexibility as we can give you and stay within the bounds of what’s real to Star Wars and maintain our IP [intellectual property] as well. Being outside of canon gives us more flexibility than we’d had if we were in canon. Because you can’t just change factions, right? You can see the things that Charles and team are laying out. I use the term ‘foundation.’ Foundational things that enable us to do things in the future, to do the things that you are talking about.”

And the thing I was talking about was fully switching factions. In the past, I’ve personally received answers suggesting that the game mechanics can’t support it and that it’s not even on the table. Needless to say, I was surprised to receive an answer like this. It’s still a no, but it’s as close to a yes that a no can get.

Over the last couple of weeks, I have spoken to the SWTOR developers more than I have in the last five years. Much more was said that I couldn’t fit into this post, and as I said, there is an operation where the lore alone deserves its own article. So keep an eye out for those in the weeks to come leading up to the expansion launch on December 14th.

For those who are interested, I did some math in researching this article because I was curious whether COVID might have delayed the launch of this expansion. Maybe it did, but it is actually not the longest we’ve waited between expansions. Legacy of the Sith will launch 2 years, 1 month, and 23 days after Onslaught was launched. However, there is a gap between Knights of the Eternal Throne and Onslaught that was 2 years, 10 months, and 21 days. It’s been a long wait either way!