Where were you nine years ago? I don’t know about you, but my life looked very different in 2013 when Guild Wars 2 first released Flame and Frost, its first official Living World update. The game has been through a lot as well, and, while future Living World releases became a part of the game, the Season 1 content was designed to be ephemeral, and repeating them was always too big of an ask for ArenaNet.

END_OF_DOCUMENT_TOKEN_TO_BE_REPLACED
If you aren’t familiar with the original pitch for Living World, the idea was for it to be less like a mini-expansion that gets dropped one piece at a time, as modern Living World is, and more like the live GM events in oldschool MMORPGs. Stuff happens out in the world, it tells a story, and then it’s gone forever. You either played it or you missed it. There was always some lasting impact on the existing zones of the world, such as a new event or world boss added to a zone or Scarlet’s energy probes littering the landscape, but the events of the story itself were never permanent.

Players weren’t too fond of the idea of feeling obligated to log in or miss the story forever, so ArenaNet rightly changed the format of future seasons to be permanent and repeatable by future generations of players, but going back and doing the same for season 1 was deemed too difficult. This has long been a big sticking point for new players, who feel like they’re missing out, and this sudden change is likely due to the upcoming Steam release and the inevitable influx of new players it will bring.

First of all, if you didn’t play Season 1 or have some kind of rose-colored glasses impression of its quality being on the same level as or equal to current Living World releases, let me just rip this Band-Aid off for you: It’s not great. The voice acting is stilted and awkward, and there isn’t a lot of it. The player character, most notably, is completely silent, only participating via textbox conversations. Encounter design ranges wildly from “bad” to just “pretty good.”

Most of this content was originally presented as open-world events that ran on a schedule, and it shows. The instances largely consist of waves of enemies spawning while you try to fill up a point capture bar. That’s tedious even with a group, but solo it is even more so. Even the Molten Facility, which was originally designed as a temporary dungeon, has a lot more “kill this constantly spawning trash until we say you’re done” sections than you would expect from Guild Wars 2.

It also feels a bit odd playing all of this back-to-back. The five chapters we got with this release were originally spread out over five months, and bingeing them in a couple hours makes it feel like the Molten Alliance was just a minor blip that the heroes of Tyria dealt with as an afternoon warmup between killing dragon minions.

While the content in this release isn’t great, it is, however, incredibly important to the overall cohesiveness of the game’s story. This week’s release in particular introduces the characters Braham and Rox, who continue to be important recurring characters to this day. I know Braham has a bit of a reputation for being a whiny baby constantly protected by plot armor, but maybe this episode will remind players that he’s had a really tough life. Rox has long struggled to fit in with Charr society, in no small part thanks to her own traumatic past. New players – or just long-time players whose brains don’t prioritize all this nonsense fantasy lore – wouldn’t have had that context before. I’m so glad that ArenaNet has finally decided to restore this long-neglected piece of Guild Wars 2 history.

Of course, some of this content should be familiar to modern Guild Wars 2 players. For instance, fractalers will be familiar with the Molten Facility dungeon in chapter four, as most of its content was split up and reused for the Molten Furnace and Molten Boss fractals. If you’re familiar with that second one, by the way, you should be warned that the soloable version of this encounter doesn’t have the mechanics of the fractal, to make it friendly to solo players. That is, there is no need to keep the two bosses apart, and one will not enrage when you beat the other, so you might as well focus one down at a time.

Additionally, a couple of the instances, North Nolan Hatchery and Cragastead, were included with the Visions of the Past update for The Icebrood Saga. We criticized these instances at the time, calling it “the barest of effort” because while it technically had much the same instanced versions of the open world events this release has, it didn’t include any of the story context, which was what players were really hoping for. This release feels like what that one should have been in the first place. 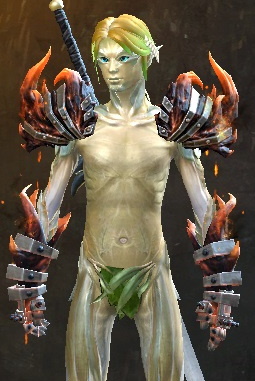 I don’t want to trash this content too much; it’s not all bad. Season 1, especially the Molten Facility dungeon, set the tone for a lot of future open world and group content, both in terms of mechanics and storytelling. It may not hold up next to what came later, but it was by no means horrible. It’s definitely worth playing, if for no other reason than to remind yourself of how far the game has come and to pick up the spiffy new armor skins (pictured here), which I assume will become a whole set as we progress through the story, as well as a free, low-effort 20 slot bag.

Season 1 may not be as good as you remember it — or maybe it’s exactly as bad as you remember it; I don’t know how good you memory is — but it’s an important historical artifact for this game. It will finally help new players to not feel like they’re not playing catchup because they weren’t there in 2013, and properly introduce them to major characters like Rox, Braham, and, in future updates, Canach, Majory, Kasmeer, and Taimi. I would have liked to have seen some of the instances tweaked a bit for the modern user, but I’m content just to have this content in playable form again.

Blade and Soul’s Warden class gets a fire sword specialization