Last week saw the release of New World‘s big summer update, including an extensive music system, the Medleyfaire event, and various endgame tweaks. This update is a mixture of solid wins and significant blunders, which increasingly seems to be just how New World rolls.

First, let’s look at the bad news. The patch was supposed to include the new expedition group finder, but it has been delayed due to technical issues. But even before the delay, I had already lost my hype over the feature.

When the roadmap first teased the addition of a group finder, most people, including me, assumed this meant automated matchmaking of the kind that is now pretty much industry standard. The lack of such was one of the biggest deficiencies of New World, and this seemed an overdue correction.

However, in reality, that’s not what we’re getting. The group finder is simply a window for people to post LFG ads, which in my books is barely an improvement over simply posting in chat.

It’s disappointing. I had for a few weeks been looking forward to finally diving into some dungeon content in New World, but at this point I’m ready to throw in the towel on ever bothering with the game’s instanced content. I no longer have the patience for this kind of archaic game design.

Mind you, I can live without dungeon content, so long as there are other compelling and rewarding activities awaiting me at endgame… but I’m starting to have concerns about that, too. 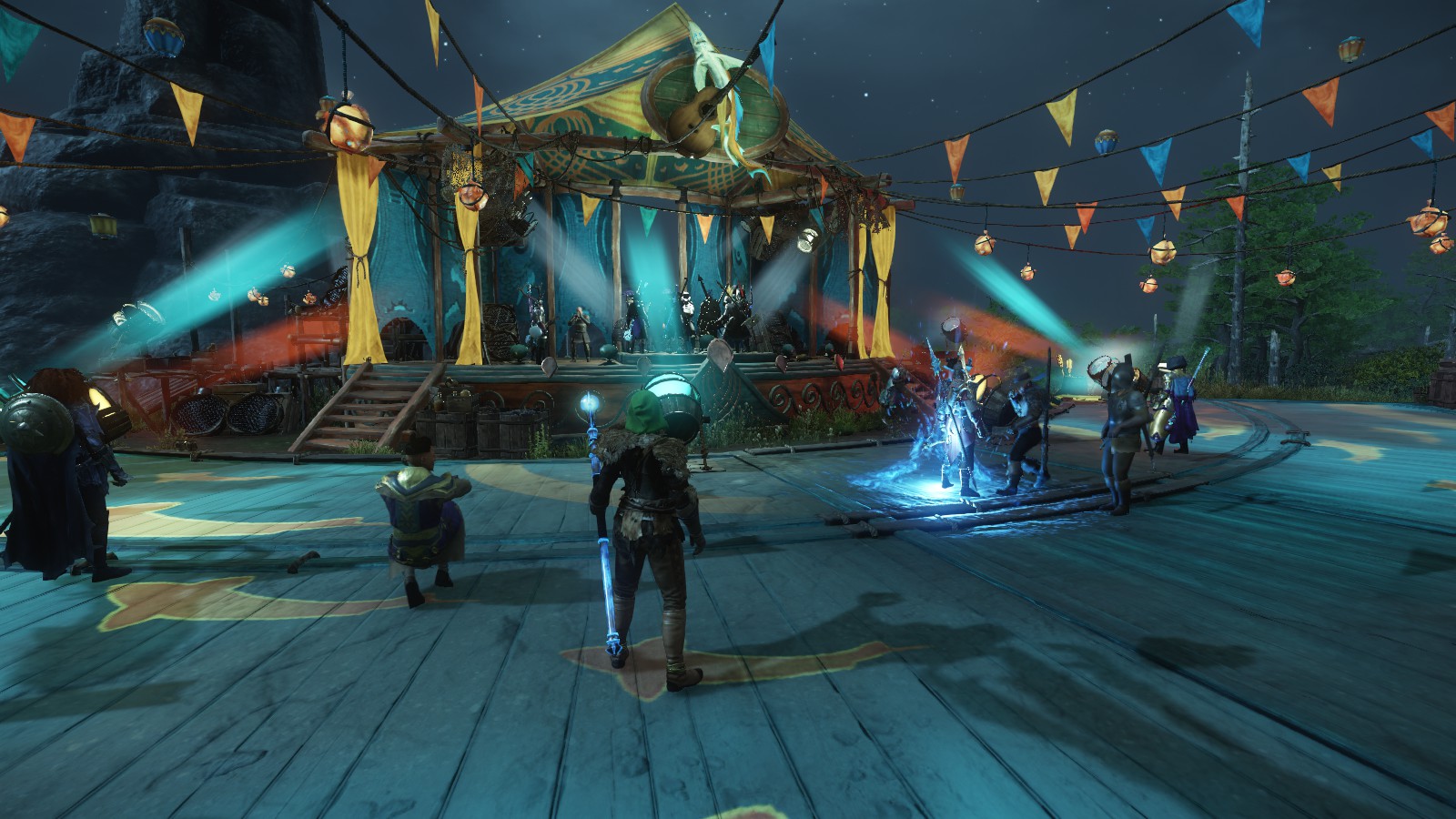 New World has done an excellent job of addressing many of the quality-of-life issues I’ve complained about in previous columns, but one thing that hasn’t been addressed is the poor state of crafting. The summer update does include some tweaks that make leveling certain skills a little easier, but they’re pretty small in the greater scheme of things.

I played a bit during the recent double XP events for gathering and refining skills, and honestly, that still felt a little slow for my taste. Reducing the required XP to level by 10-20% for certain skills isn’t nearly enough.

As with dungeons, I’m getting ready to simply give up when it comes to crafting. I do enjoy the mechanics of crafting in this game, but I can’t keep farming mats for hours only to see my skills climb by just 1-2 levels out of 200.

I’m a very slow player, and my main still hasn’t reached level cap, so I have a lot of content left to go before I worry about endgame, but I’m not sure exactly what I’ll have to do when I get there. I suppose I can still farm gypsum from solo content.

But all is not doom and gloom. As is often the case in New World, even as it faceplants in one area, it triumphs in another. It’s early days, but my first impression of the new music system is overwhelmingly positive. 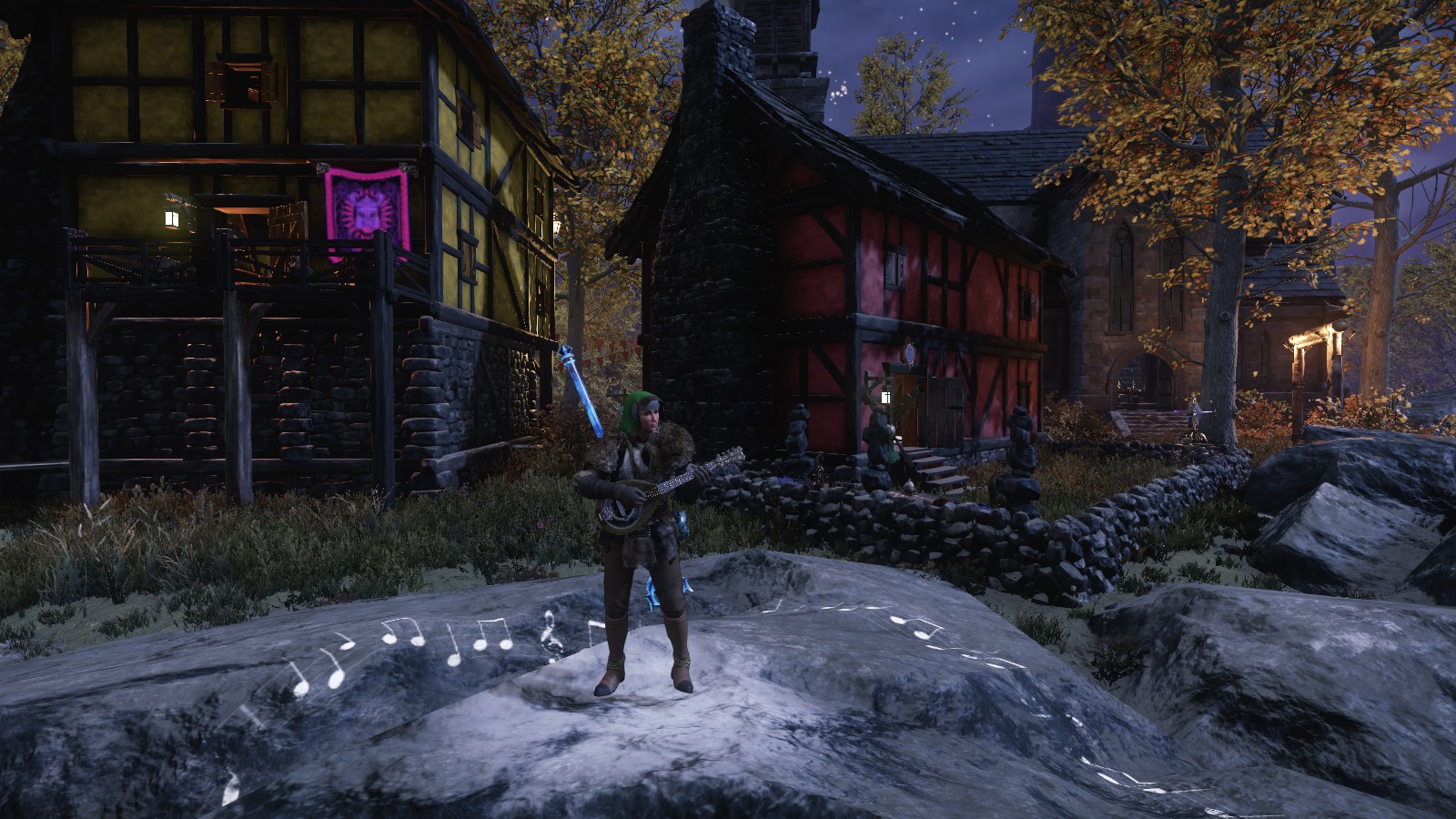 Instruments can be acquired from the furnishing profession or from the current Medleyfaire event. Once you’ve got one equipped, you can use a Guitar Hero-style rhythm game to play songs, which grant a minor buff to you, or to anyone near you if they tip you.

The buffs aren’t the sort of thing that’s going to make or break your character’s performance. They’re more in the realm of utility perks, like faster gathering speed or increased territory standing gain. Tips are priced accordingly, at a fixed 10G. You’re not going to make it rich by busking, but it’s a nice little extra trickle of income to help encourage performing for others.

Initially, you have access to only one buff from your music, but more become available as your music skill levels. You choose your song and its buff separately, too, so you don’t need to worry about one particular song being drilled into your skull because you need its buff.

For even more choice, many songs can be played by multiple instruments, so if you get sick of playing your favorite song on guitar, you can switch to your azoth flute or whatever else you fancy. There are of course many songs to collect; the main source from my experience so far appears to be open world treasure chests.

Don’t worry if (like me) you’re not very good at rhythm games. An imperfect performance only means your buff’s duration is a little shorter, and you earn a little less music XP.

Honestly, this music system is a masterclass in how to do “fluff” features right in an MMORPG. It’s just crunchy and practical enough to not feel pointless, but nothing it offers is essential enough that you really need to engage with it if it doesn’t interest you. It has lots of depth for those who enjoy it and can easily be ignored by those who don’t. 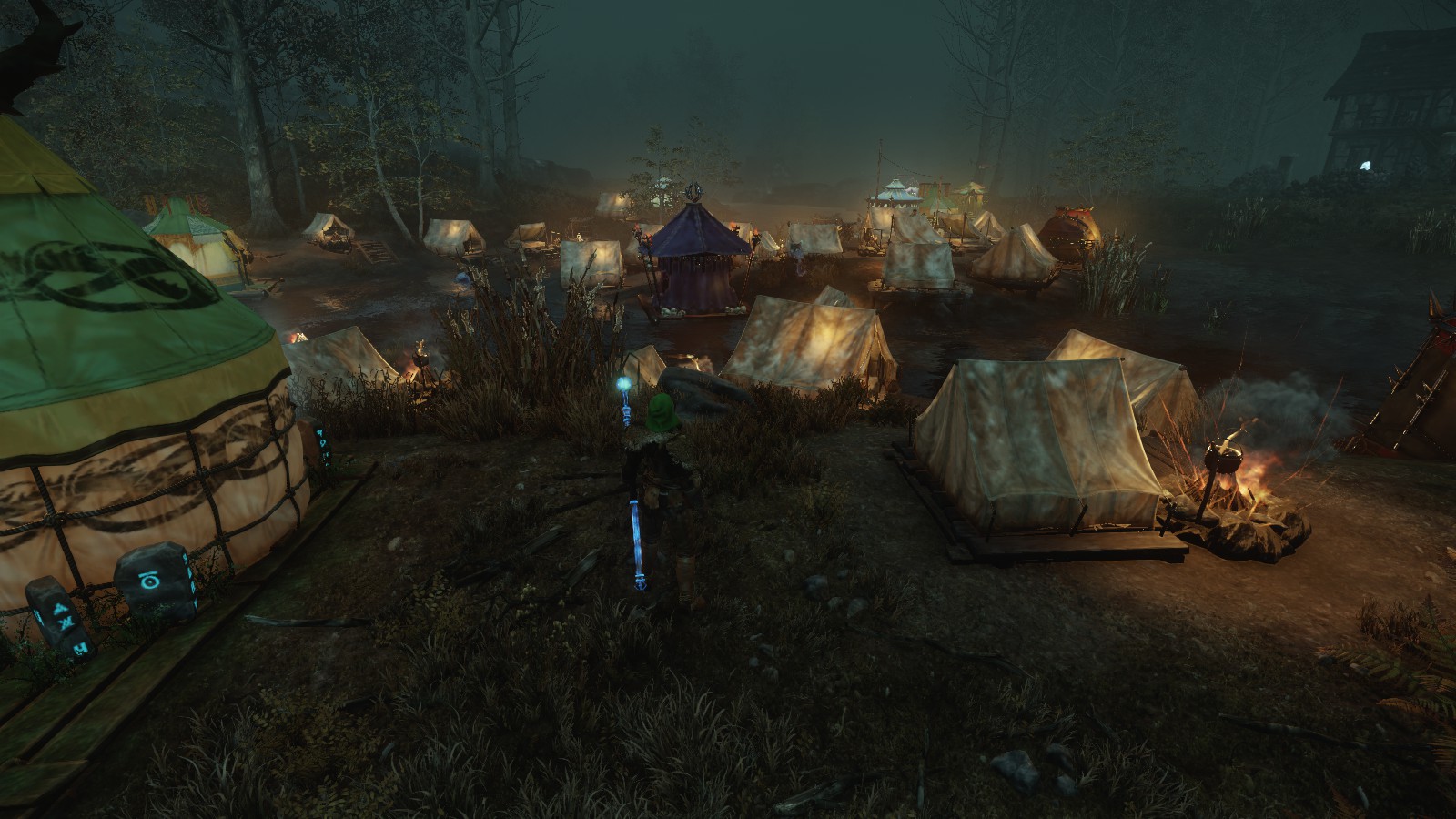 I can see only a few minor hiccups with music as it stands now. One is that leveling your skill does feel like it’s going to be a long grind (similar to the other trade skills in the game), but since it’s non-essential for character progression, it still shouldn’t be something you need to stress over too much.

The other is that presently there’s no option for free play or creating your own songs. You can play only the songs Amazon has designed for you. I’m not bothered by this personally, but I’m sure some will find it disappointing.

There are also some notable endgame improvements in this update. There’s been a major rebalance of item perks, the expertise grind has been significantly reduced, and gypsum has been made more plentiful. As previously noted, I’m not significantly invested in the endgame right now, but the reception of these changes from those who are has been very positive.

Meanwhile, the Summer Medleyfaire event is another strong win for the game. The winter event was a real treat, and this seems to take everything it did well and improve the experience further.

My problem with most holiday events in MMOs is that they make your work far too hard for very weak rewards. How is grinding harder than you normally would for rewards that are worse than average a holiday?

New World gets that holidays should be holidays. They’re full of low-effort, high-reward activities that offer a welcome break from the usual grinds. 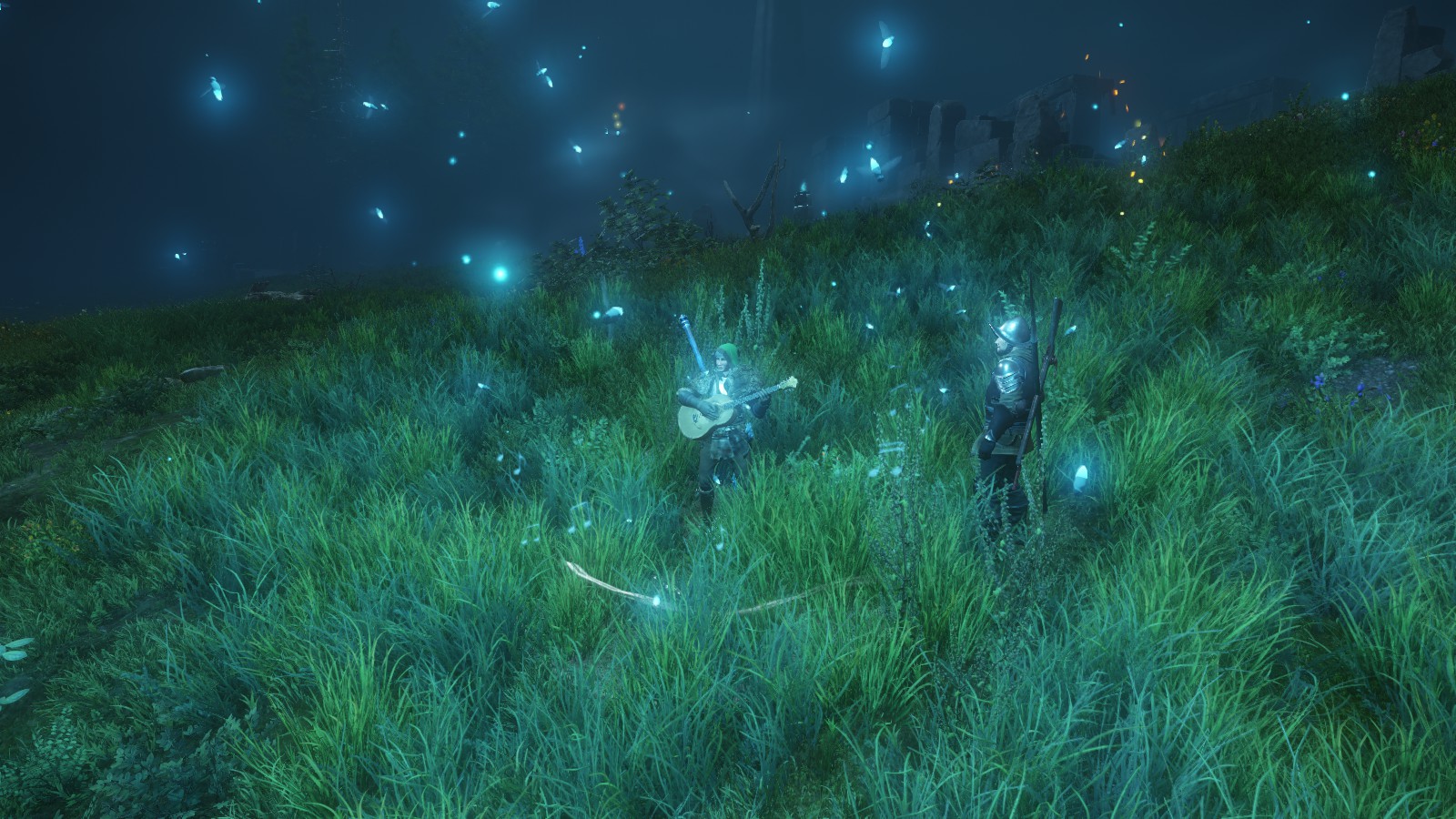 As in winter, there are piles of presents you can open daily in each town, and now there’s not even a limit to how many you can open in a day. You can also earn a healthy chunk of event reputation simply by dancing at each festival pavilion daily, and if you want to push a little harder toward getting the best rewards, you can also go fishing for Aeternum sturgeons to earn extra event currency.

The most creative activity, though, is the maudlin bug swarms. Effervescent clouds of soft-glowing insects, these swarms can be charmed by playing a special song using the new music system, rewarding you with fishing bait and more items to exchange for event currency. It’s such a beautiful, soothing visual and auditory experience, and it fits New World‘s otherworldly fae aesthetic so well.

After one day of light play, my event reputation was already at 3600/10,000. Now that I’ve finished the event quest chain, progress will slow a bit, but I should still be able to max it out and get everything I want from the event with time to spare. And since many cosmetics are account-wide, I don’t need to repeat the whole process on my alt.

There’s also going to be double fishing and music XP weekends the whole length of the event, so it’s a great time to level those skills.

Oh, and the music at the festival pavilions is just fantastic. “House music meets 16th century folk” is a combo that absolutely shouldn’t work but totally does. Even outside the festival proper, the world is alive with music as people learn their newly acquired instruments.

Take notes, other MMO devs. This is how you do in-game holidays.

Wisdom of Nym: The powerful stuff in Final Fantasy XIV that went missing in action