Hello. My name is is MJ. And I have a golem problem.

Boy, The Secret World got me good — hook, line, and sinker. By the time you read this, I should have finally gotten some sleep, some much needed sleep. And that’s only because the latest golden golem event is now over. I don’t think I have ever spent so much time grinding in one game in so short a time since I was aiming for master dancer in Star Wars Galaxies.

Wait, what? Isn’t TSW all about the story and the atmosphere? Oh, it is definitely that. But for a short burst of time, Funcom found a way to make me grind nonstop until I either passed out at the keyboard or I was forced out by a shut-off. Luckily for what shred of sanity I may have had, the latter has happened. (Although there’s a distinct possibility that the former occurred a time or two.) For an entire week, story and every other kind of gameplay was basically tossed on the back burner while I focused solely on repeating one thing over and over and over.

How did this happen? How did an anti-grinder become a crazed grinding addict who couldn’t stop? It’s called the Gilded Rage event. And I am already counting down the days until the next one — whenever that may actually be.

Instead of labeling this event Gilded Rage, we should call it Golem Crack. And no, that isn’t a reference to what’s showing with the golems’ lack of pants. It’s just horribly addictive. And way easy. You need just one more… well, one more… OK just one more after that…

I know there are hooks in game. Hooks are important; people need to play games to keep games around. Usually, however, hooks just don’t quite exist for my preferred type of gameplay. I know people who grind out dungeons and raids for gear until they are so sick of them they could scream, but do they stop? No. They keep doing the dungeons, raids, reputation grinds, or what have you because they want the gear. Me? I couldn’t care less. There is no way I’d care about any kind of gear enough to wade through monotonous, repetitive grinding. And there are plenty of others like me. So the trick is finding what I do care about enough. And someone very diabolical at Funcom found it. This brilliant evil person discovered the way to pierce gamers like me with hooks.

The the only things I would expend great effort at getting are pets, cosmetic outfits, and housing items. (Or in the case of The Secret World, anything that gets me more story!) When you make those items exclusive to a certain event that’s offered for only a limited time, I simply can’t resist; I have to have these things! The Gilded Rage event does just that: It offers a slew of appearance items and even a few pets. So you can understand why I couldn’t resist. Which actually seems absurd when you think about the fact that no matter how many outfits I collect in game, I tend to wear only a couple favorite ones, and I don’t care a whit about outfits IRL. But I still can’t help myself. Must. Have. Outfits.

On top of all that physical loot, you also gorge yourself on AP as SP. Besides getting a hefty amount from the golem kill, the event includes double AP. So even if you care more about getting skills, the event calls to you, too. There’s no escape from this addiction; there’s literally something for everyone. 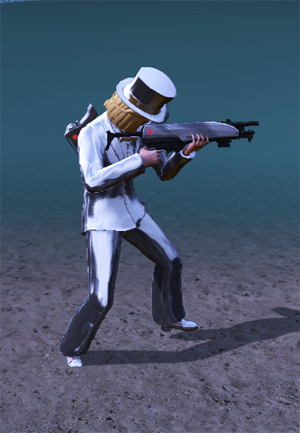 Golden golems don’t lay golden eggs, but they have many other goodies. And so help me, I’ve gotta get ’em all! You get a guaranteed reward bag from the auto-granted and completed mission each time you kill a golem as long as you get a few hits in. This year’s bags were filled with the same items as the last two times.  What is in each bag depends on RNG, but the possibilities are:

Since I got all of those items on both my characters during my first addictive spin with the Gilded Rage event, why would I keep going back for more? It’s not like the clothing or pet items can be acquired a second time to trade; all you get at that point are bullion and signet bags. Well now there is an additional layer (of addiction) to the event. Besides the loot bag, players now also earn another coin type, the gambler’s marker. This coin can be used at the event vendor in London to trade for his specialty goods, which are only available during a Gilded Rage event. Like the new lucky coin vendors, this merchant give players the chance to nab desired items without being at the mercy of RNG. Last time, there was only the golden-runed golem and the daily bags. This time, there were three outfits and another pet. These outfits and pets differ slightly from the ones in the bags, usually just in color.

The bags on the vendor are the same ones players can buy from the item store with cash. Players can grab two bags each day for two tokens each. These bags are filled with tons more cool stuff, including:

Of course, you more often than not walk away with the super common Animanhattan drink or the Glitz gun, but you get something from a higher tier as well. Except for those two super-common consumables, the items are tradeable, meaning you might be able to broker some deals to get the things you missed. (If anyone has a white rhinestone suit to trade, let me know!)

There was also a new golden outfit available in the store, this time a shiny morph suit. Now I look like the Gatekeeper’s girlfriend! Sadly, this one couldn’t be purchased account-wide, but I still got one. After all, Emy Goldenbutt needs all things golden. Or, most things: For a limited time there was also a golden geist motorcycle, but I was able to resist that. Who says self-control is completely dead?

After the mad dash to do as much as I could in the short time I had to play during the event, I must say I am kind of grateful it is over now so I can get some rest. But since there are still more things I wasn’t able to get that I really do want, I am already looking forward to the next! What can I say? I am a glutton for punishment when fluff is involved! 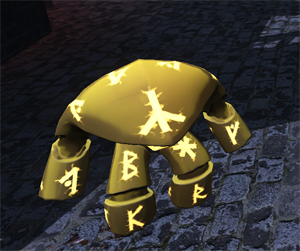 My golems will go on and on

When will the next infestation of golden golems occur? There is no way of knowing that. The very first Gilded Rage event  happened back in September of 2013 after players were clamoring for another round of the popular anniversary event. Those world bosses offered pets, clothing, and scores of AP, and players hungered for more. However, it is understandable that devs would want the anniversary event to retain its character by staying just an anniversary event. So instead of just restarting that one, devs created a whole new, yet similar one. Yes, I did a happy dance.

Since then, we’ve had a couple more runs of Gilded Rage. With no specific calendar date tying the event to any particular time, it can actually happen randomly throughout the year. We’ll never know when the devs decide to start the event up again (do you think batting eyelashes will help speed it along any?), so you may have a chance to use your leftover gambler’s marks sooner than you think.

An Overabundance of Cats TSW gets about as much coverage as many of the existing Western MMO’s like LOTRO, DCUO, AoC, Neverwinter etc. You’re damn straight an older MMO with a “smaller” playerbase isn’t going to get as much attention as new games with a lot of hype and pretty graphics, that’s the nature of things. The fact that they’re all coming from Korea is inconsequential.
While I was disappointed, I hardly expect Massively to cover every in-game event that MMO’s host, they’d need an entirely separate newsfeed and someone dedicated full time to checking on these games.

Just bought this game and loving it.  Sanctuary chat has been awesome, and people have been great, but for the life of me I can’t find a good cabal or group of players to play with.  Any suggestions?

confectionally Something else might be going on because it was smooth as silk for me. FIf you use the reduce lag link people offered in the event channel?

Dajhryne I had the tokens for the black one, but I don’t like it as much, so I saved them.  I probably should have, but the Elvis fan in me must have white! Didn’t get the sweatsuit or the bunny leotard either.  I failed at clothing RNG this time, but I did get that pet right off the bat lol.

I have an extra white rhinestone suit if you don’t  come across one anywhere else.
There was also a black velour sweatsuit and a bunnytail leotard outfit and accessories from the vendor bags, The black rhinestone jumpsuit, bought with the gambler’s marks, is my new favorite thing to wear. Sadly those aren’t tradable.

Greaterdivinity An Overabundance of Cats Those first 5 dungeons in any difficulty will drop the blues you need to gear up and they’re pretty easy.

Wait, there was a golden golem event? And I missed it?

I sat this one out, and I am now equally split between wishing I would have jumped in and glad I didn’t. Brings a whole new meaning to “Looking for Shinies”, or now it needs to be “Grinding for Shinies” :)

I had no idea there were event activities to do this past week. I thought the “gold event” was just a cash shop thing because the only place in game I saw information about it was there. I guess I’ll have to wait until next time, bummer.

I tried to go to one of these events…once.  When I still couldn’t step within a hundred feet of a golem without freezing and crashing, even after turning down every single graphical setting as low as it could go, I finally gave up.
I have a decent computer but not decent enough apparently ;)

Massively on the Go: Pokemon Sword and Shield’s Dynamax Adventure dungeons for the fan and MMO player

MMO Burnout: Red Dead Redemption 2 succeeds in spite of itself

Massively Overthinking: Where is the line between buy-to-play, free-to-play, and subscription MMOs?

WRUP: The alphabet of bird edition

Beyond the Wire thrusts you into a WWI multiplayer battlefield