Pokemon Go has received some large updates recently: the buddy system, medals, some big gym changes (twice), and now we’ve got dailies. We’ve been dazzled with two events granting bonus… well, everything, and yet, I’ve been noticing veteran players around me retiring anyway. Casual players are playing less often. During the Halloween event, I was surprised about the number of people that actually didn’t return to the game!

Rather than go on pure anecdotal evidence, I conducted an impromptu survey on social media to get a clearer picture of why people quit the game before the November 0.45.0 update. Here are the results.

Before we dive in too deep, let me say this: I don’t believe the game is in any immediate danger. Research has shown it’s still profitable, that the developers understand and seem to have anticipated player content needs, and just for good measure, here are a couple of articles specifically mentioning that the game is doing just fine.

That being said, player loss is a constant threat to any game. As Niantic considers PoGo an MMO, this is something we really should talk about. 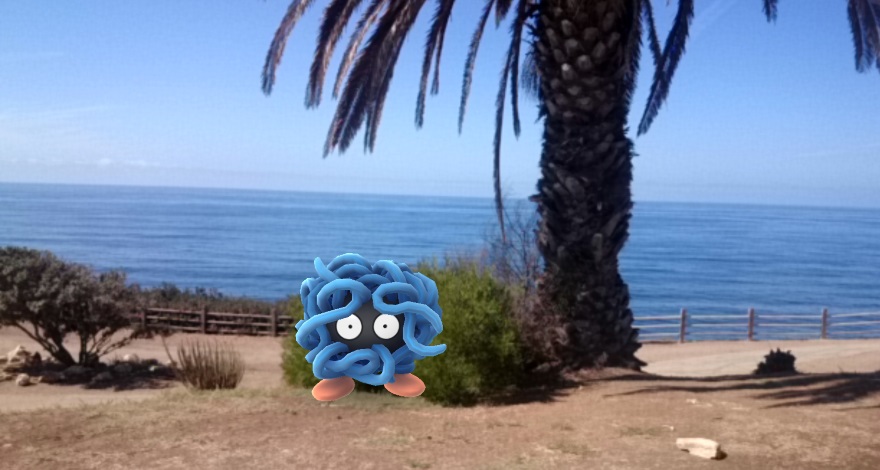 My survey isn’t scientifically robust, but I wanted it to be a bit better than a simple poll. I took a list of common complaints and potential issues designers have brought up in the past, put them into Survey Monkey, and made sure the options would appear in a random order to help prevent first choice/last choice and other biases. I allowed respondents to choose only one reason for quitting because I wanted to see the most important factor. There was an “other” option that allowed for commenting so I could adapt my results if I was completely off-base. Naturally, I weeded out responses like “I’m still playing,” “I’ll quit if [X] isn’t fixed” or “What is the meaning of life?”.

The original options list contained the following choices for quitting:

I was hesitant about including both “boring” and “waste of time,” but during a conversation with a cashier who’d seen me playing the game, I realized they weren’t the same: The cashier corrected me that it was “boring” when I interpreted a statement as “waste of time.” My understanding was that “boring” meant players wanted to like the game but it was failing to engage them, while “waste of time” meant players realized they could have been doing something else. The results ended up being nearly the same, so maybe I could have combined the two, but as I was trying to base this on commonly heard complaints, I left it as is.

I sent out a tweet with a link to the survey, posted it on Reddit, and had a little help from some other people (thanks Serebii!). I felt social media would be a good way to get a diverse set of people, though obviously being on social media also means these people are or were “core” fans who still care about the game. After a week (prior to the Dailies update), I collected the data, found some categories I’d missed, and made you all a nice little pie chart. Ta-da! 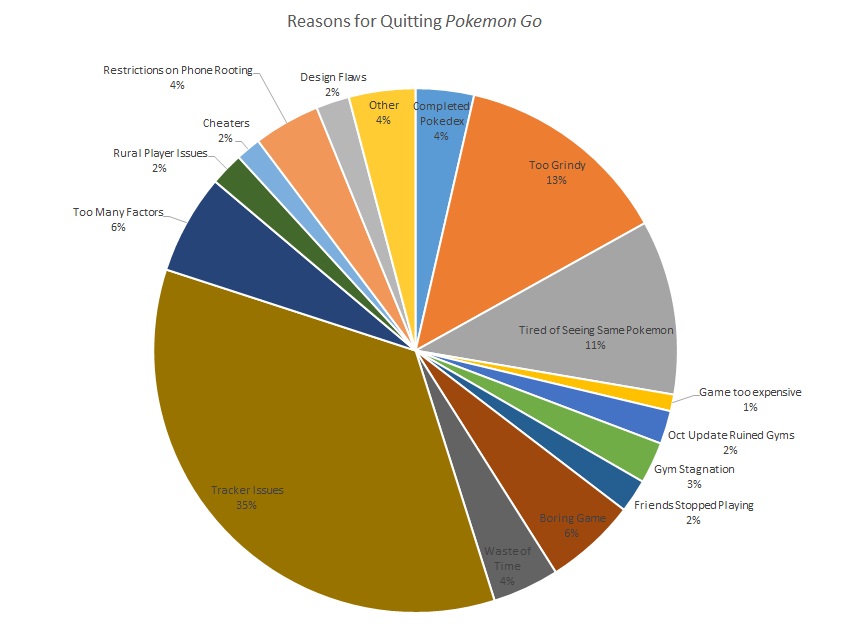 After weeding, I had 195 responses I could use (and do note that some people who haven’t quit could leave an answer). Tracker Issues dominate the complaints. The original “other” section included several complaints about how the respondents missed third-party tracking apps, something I personally never got into. I almost wonder how knowing the specific location of Pokemon might affect the main series, as random encounters are a series staple. However, since there’s been some legal issues surrounding the areas people play in and some wandering accidents, explicit trackers and cooperation with everyone from homeowners to government departments might help Niantic in a few ways.

Despite wanting the most important factor for quitting, lots of people listed multiple issues. Rather than simply ignoring them, I figured that in and of itself was a reason to quit. In fact, it’s the very reason I didn’t allow for multiple choices. For those people, fixing any one of those issues wouldn’t have been enough to bring them back.

This goes hand-in-hand with another surprising category: design issues. It surprising not that people complained about this but that multiple people brought it up, even though I didn’t specifically target industry folks or designers with the surveys. There were some pretty savvy people who understand games and talked about everything from the lack of series staples to UI issues. It’s a bit different from the catch-all category because these people know the game needs more than tweak or rollback — they know it needs more fundamental improvements.

One factor I regret having neglected to include was rooting issues. I don’t talk to a lot of tech savvy people who play PoGo, so I’d completely forgotten that this was a thing. Cheaters were another issue that came up a few times, as were rural issues. I had played in rural areas in Japan (in fact, prior to my having a car, American suburbs really felt rural to me!) but had forgotten just how demotivating playing can be when there’s only a few places to play.

The new “other” section includes everything from sound issues and phone capabilities to frustration to find specific rare Pokemon.

Surprisingly, though, you’ll notice friends quitting isn’t the biggest reason people are quitting, and that gym issues in general aren’t the top concern. Again, there are limitations to my survey, and I’ve love to hear what sort of exit polling data Niantic has collected on its end, as free-to-play games I’ve played rarely follow-up on why my account hasn’t been active in awhile.

That being said, it seems most people care about their ability to hunt and raise Pokemon, not battle or engage them with friends, which provokes interesting questions about why people play the game — and whether it’s truly an MMORPG — in the first place.

Interested in some of our more scientific articles and Pokemon Go deep-dives? Look no further:

Exploring real-life PUGs, the Plus, and the antisocial nature of Pokemon Go - Although Pokemon Go isn't advertised as an MMO, both experts and players have noted it does present some interesting similarities: Both have tons of players on servers where player locations are tracked. Both…

Comparing American and Japanese Pokemon Go culture - My previous article on the culture of Japan's Pokemon Go scene was written before I'd experienced much of the American one to keep my explanations as unbiased as possible. Although I…

Exploring Japan’s Pokemon Go culture - As some readers may know, I've spent the last few years in Japan trying to tackle the local gaming scene, online and off. While Japan may be the birthplace of…

Massively OP’s guide to understanding video game research - I noticed two strange things in the comments section of our lengthy Exploring the Video Game Debate series: People were angry at research that supported what they were trying to…

Massively on the Go: How Pokemon Go is improving without all the ‘go’

Starborne talks up its new map and new win conditions ahead...