Following up on its original Steam release by Creative Assembly, Wargaming semi-recently decided to help publish Total War: Arena and present it at E3 2017. It makes a lot of sense, as both companies primarily focus on historical war games and pride themselves on trying to keep things accurate. It’s personally not my favorite genre of games, but I did enjoy history class and always liked when students told me they played these kinds of games because it at least got them interested in their past (though Asian dramas were also a popular “edutainment” option among my students). That being said, I was actually surprised by the process Creative Assembly used in its research — and with Wargaming’s help, tried to gamify it.

Total War: Arena is a multiplayer, real-time strategy game focusing on historical battles, specifically during the time of the Roman Empire (yeah, that’s a big chunk of time), but also the empires/cultures that were fighting the Romans at that time. While it might be cool to suddenly have Aztecs come in with their own fighting style or to do a different time period, Creative Assembly is trying to focus on this particular era, especially because it gives it a fair amount of history to work with.

The history aspect isn’t just for show. Realism is something that isn’t allowed to take full control of the game but does guide its 10v10 battles where each player controls an entire army under historical generals of her choosing. Friendly fire is on for realism but also communication, something I really appreciate. For one, friendly fire doesn’t just apply to being able to kill allies; it works on your own troops, so don’t fire that catapult into enemies mixed in with your own units or allies, as when you try to retreat, enemy units may “forget” to raise their spears, causing your units to impale themselves.

There are siege weapons, but they’re more like artillery than something you use against a fort, which seems like a bit a waste except for one thing: They hit the enemy morale. While you can outright kill your opponent, certain skills and units affect morale, which sounds like a “fear” effect that can hit your units, making you unable to control them as they break formation and flee for their virtual lives. This gives players a second way to beat their opponent and make a comeback, as victory comes from eliminating either the enemy army or its general.

As you play (and more so if you win), your units will progress, with each ability having some level-up options, like choosing to focus on overall speed versus acceleration. Yes, there are some statistical upgrades too, but once you “jump lines” (think moving up a tier), you get abilities that become very different, not just +20 speed — like grabbing javelins instead of polearms.

As you can probably guess with a free-to-play game, you can give consumables units to temporarily increase their stats or (with vehicles) change their ammo type, all for a fee. These are bought with in-game currency, though you can also buy gold and use that as well. The idea is to allow players to buy “acceleration, not power,” but if you’re skeptical about that, know that I am too — we hear it a lot.

The game is still in beta, so for an MMO player who wants social systems, Total War: Arena isn’t there yet. Neither Creative Assembly nor Wargaming could explicitly confirm or deny guilds/clans, but they did say they’re focusing on accessibility at the moment, getting people into the game before making it easier to keep people there. You can’t really play against friends yet, just with them, unless you get very (un)lucky with the matchmaking system.

As you may have guessed, there’s currently no PvE in the game. In fact, AI was built out only for the press demo I watched, even though people on the showroom floor were playing on the live servers against seasoned beta testers playing online in 8-9 minutes matches (though games have a 15-minute limit), not some fake separate demo. That being said, CA is looking into possibly doing something with it, as there is some development going on.

The game uses something they call a “genetic matchmaking” system, which looks at units, player skill, load outs, all of that, supposedly to the point that “when it appears unbalanced, it’s technically balanced.” I didn’t have any time to interview the person in charge of building the system, so I’ll reserve judgment on it for now.

And while Steam fans may be disappointed, one of the strong points about teaming up with Wargaming is their attention to usability. As CA notes, “The Total War series can get pretty intense.” You’re not just gaining levels, but going through multiple trees, unlocking different units plus different abilities/gear not for a single unit, but whole armies. That’s where Wargaming came in. 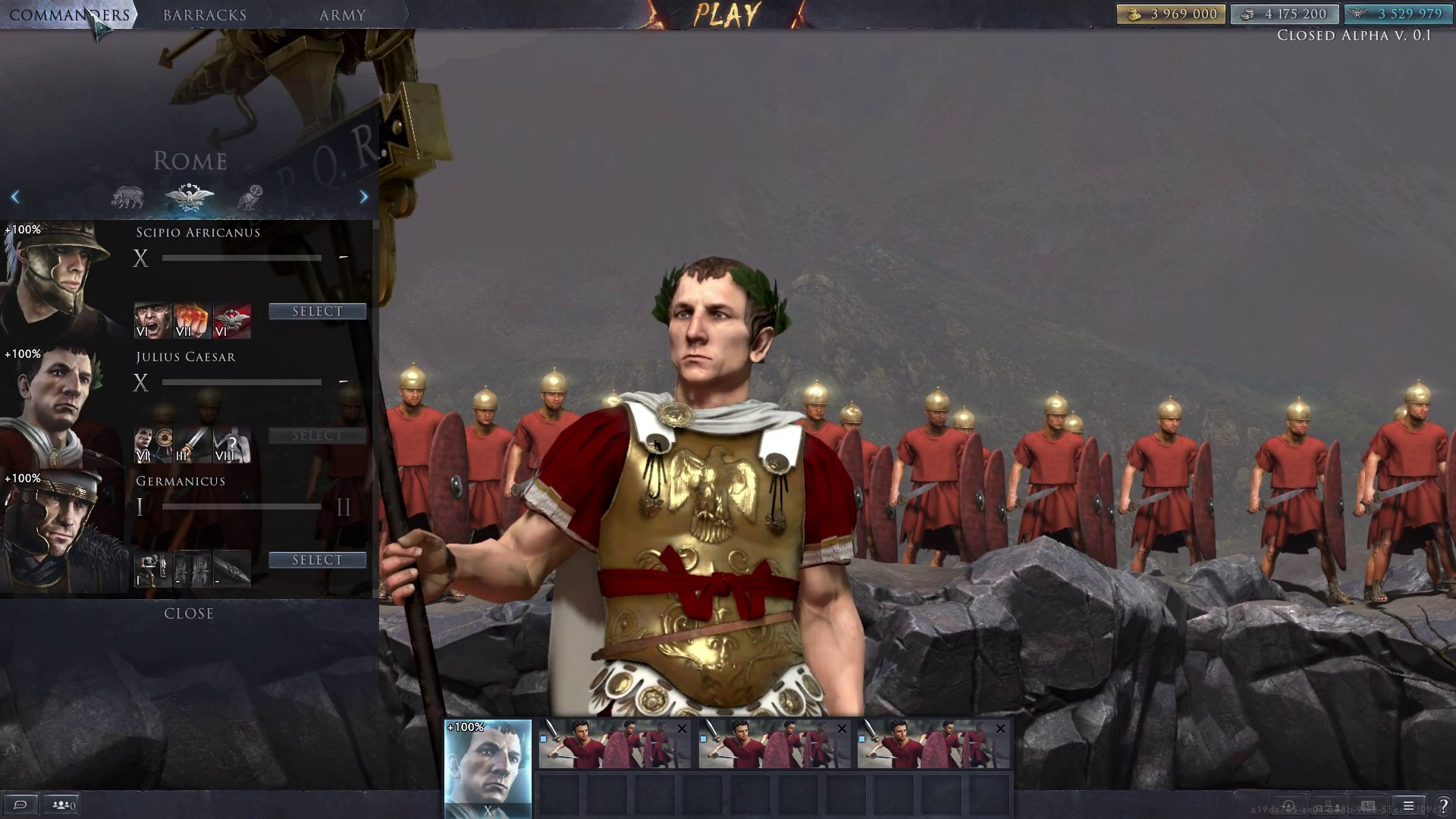 Some of the Wargaming staff joked, “We should have been working together for a decade.” Creative Assembly has the skills Wargaming wants to see, and Wargaming has the free-to-play experience (which also translates into a broader playerbase) CA wants to utilize. Since their company cultures are similar, they ping pong ideas back and forth, even if Wargaming is the financial might that lets CA publish. “Total War is a hardcore, deep game,” according the devs, and Wargaming’s helped CA see how to make it more accessible, not by dumbing the game down but by explaining the multiple systems in ways that ease players into the deep side of the pool rather than throw them in there and pray they don’t drown. On the showroom floor, both companies say they feel they’re seeing success, as the demo people are playing is against live players who have a lot of experience. The E3-goers were mostly losing, mind you, but seemed like they were enjoying the game.

Like Wargaming, CA doesn’t just wiki historical stuff and call it a day. It uses multiple sources, like primary sources from people of the day and expert opinions. It also makes sure to keep the various factional and cultural differences in mind since a hero in one culture may be seen as a barbarian in another. The developers on both ends say they aim for authenticity rather than accuracy — that is, they recognize that the truth is nearly impossible to find, but by using multiple sources, they at least have something beyond their own imaginations and personal feelings to base things off of, reaffirming what Massively OP’s already seen of Wargaming’s process.

This means that even though you’re playing a game, you’re interacting with some above-average fiction based on research that I’d wager would make most Hollywood scripts blush with shame. That’s why the characters’ biographies aren’t short little summaries but miniature history lessons. There’s a preference over fantasy, in that something in history, because they happened, seem more unbelievable. The team geeks out like Star Wars fans anticipating a new movie when talking about the history of Boudica, the next general they’re adding to the game, not because she’s a unit they like but because of the history of that character with the game’s Roman faction. The team likes the little details they can put in the game — for example, if two generals actually fought each other in the real world history, they’ll have unique animations showing their animosity (or other relations if they occurred). Julius Caesar, Leonidas, Germanicus, and other generals’ abilities are based on a personality Creative Assembly’s research has shown. Rome, Greek, Barbarians armies aren’t just skins and stats but functionally different. Roman units stay in very “square formations,” while Barbarians are more “individual units” working together as a “herd.” The addition of Boudica will also herald war hounds, literal dogs that can “come out of the trees” along with more traditional dog hiding locations to attack unsuspecting units.

Again, Creative Assembly and Wargaming are clearly steeped in an appreciation for history. They admit that it’s just their perspective and that, ultimately, we may never know the objective truth, but it’s something they hope will help educate their players, and that sentiment is something I really wish more developers had. I’m not sure if the game is something I’d pick up and play myself, but if it’s a way that lets people interact with history and expand on the generally one-sided history we tend to learn during our primary school educations, I totally support it.