Hey fellow hunter! Did you also enjoy the Monster Hunter World weekend betas as I did? Wondering if the full version is the same? Well here’s the short answer: Nope! Article finished, time to go back to hunting.

Just kidding! While the release version of the game isn’t the same as what you played, it’s still recognizably a Monster Hunter game. We’ll talk more about the online experience once the game’s been released to the masses for awhile, but a few hours in with a review copy of the launch product have answered some questions and concerns that came up during my beta experience. 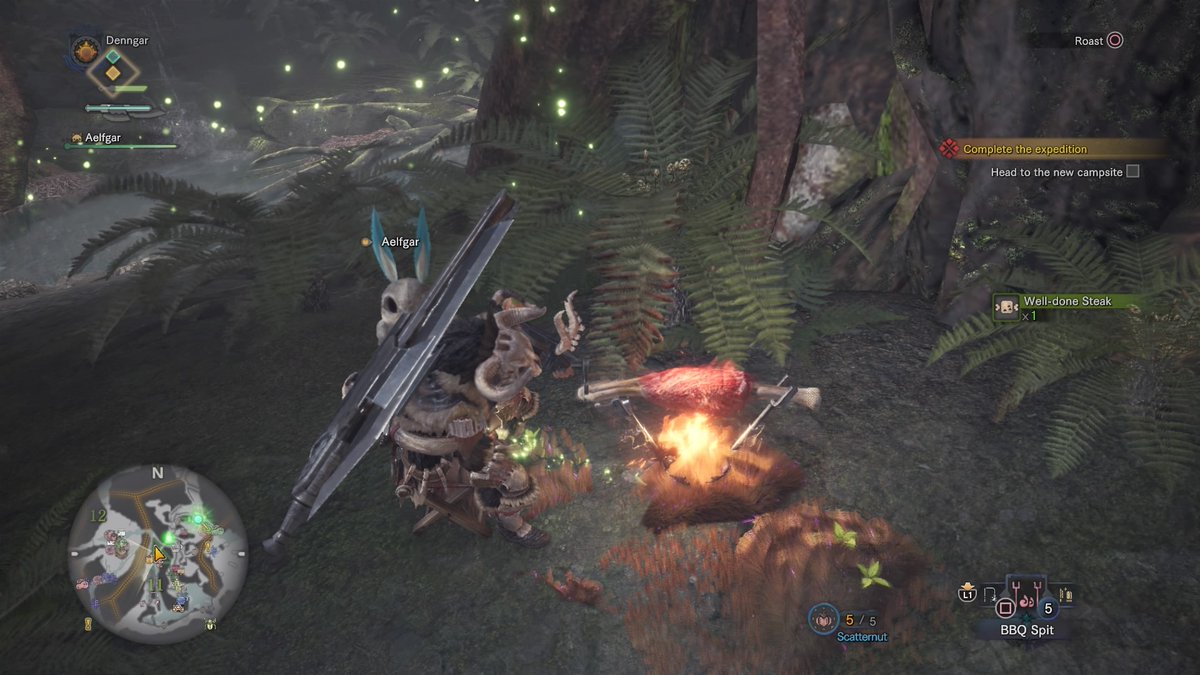 All the cool functions and features you saw in the weekend betas (the slinger, new combos, highly interactive environments, etc.) are intact, but as many of us suspected, the betas were more of a demo. Unlike in the betas, you won’t be given unlimited cash and consumables. You won’t just be queueing up for missions back to back. You won’t start off with strong enough gear to really stand toe-to-toe with Anjanath, the pink-headed monster we’ve been seeing since the first reveals of the game.

This is going to be another Monster Hunter game, but much more accessible. For example, like in the main series, you’re basically going on small raids. Yes, there’s some exploration and crafting quests, but think of those like gathering potion mats on raid rest days. You’ll need a good stock of cooked meat, potions, and maybe some ammo depending on your class. Once you have that, though, you’ll be able to jump into battles and combat-dance your way to victory.

Again, unlike in the betas, Monster Hunter World continues the MH path of learning monsters’ behaviors. You can’t always attack recklessly until the monster is dead. You need to know how that monster is going to signal it’s doing a running attack. You’ll need to judge where you can be standing that’s safely out of its reach when it stops, and how you can get in a few hits before it readies a follow-up attack. MMO players who love action oriented combat but need more of a challenge without the grind: Monster Hunter as a series is right up your alley.

What’s new, though, is how streamlined the consumables are. Not only do you no longer need to worry about having gathering tools break (they’re default and non-consumable now), but the game will actually automatically craft vital items, such as potions and mega potions, as you gather the correct supplies. This not only saves you time but potential pack space.

Gathering, similarly, is easy to do on the run, and feels the fastest yet in the series. As a crafter/gatherer and major hoarder (though not as bad as MJ), I find my problem with the series has always been over-gathering to the point that I was in danger of failing my main mission. While I still probably grab a bit more than I can actually carry, I don’t need to focus on it quite as much as I usually do. In fact, not only have I not yet timed out on a quest yet, but by the second major mission, I’d crafted a full suit of tier 2 armor and tier 2 weapons for myself and my palico, my combat-cat assistant.

The uninitiated should also understand that the Monster Hunter series is known for its grind. Not a leveling grind, but massive amounts of raw materials needed for consumables and gear alike. I don’t see that going away, but Capcom has certainly eased the curve.

Part of this has to do with less text-heavy explanations and more on-screen combos, videos, and voice acting to teach new players (and veterans) the game’s systems. And there’s a lot of them: gathering, direct and indirect crafting, weapon combos, item management, monster tracking, squads (think guilds), online play, offline play, food buffs, and a lot more.

I’m over five hours into the game, but contrary to my experience in past games, this time around I feel as if I’ve made some progress beyond “I didn’t fail a mission!” The game may still be too slow for gamers looking for something short and simple, but especially for MMO players, it feels like you can get to the meat of the action very quickly, not only in the game’s multiplayer but in the singleplayer as well. 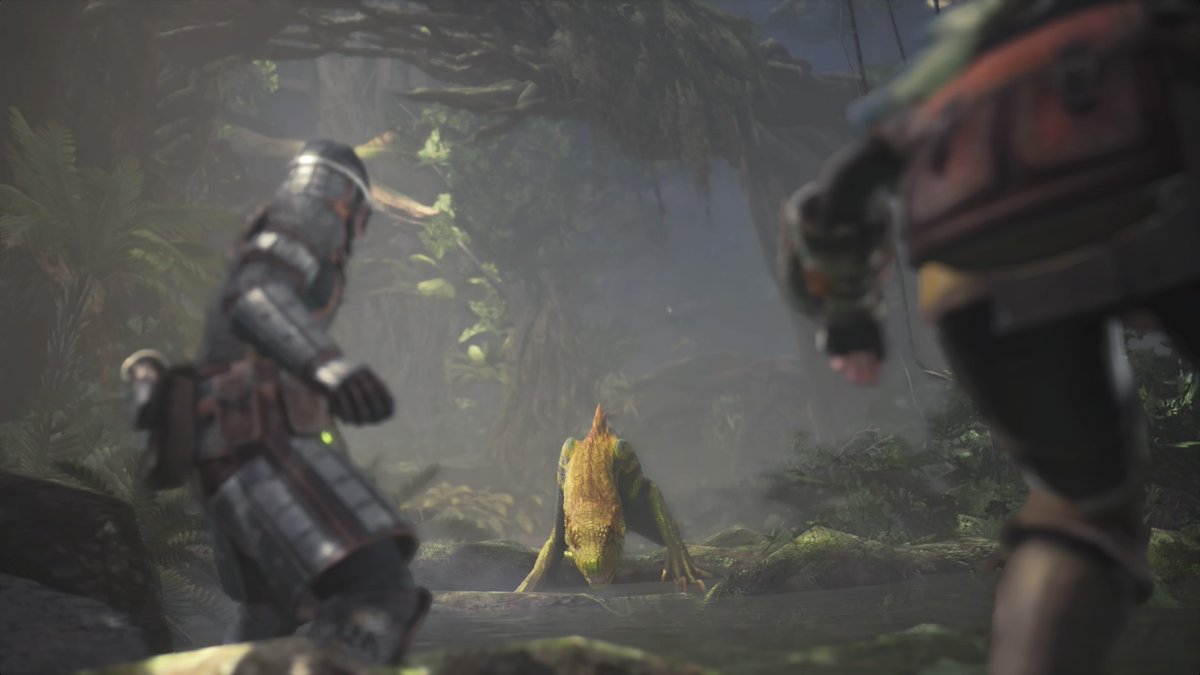 Generally, Monster Hunter keeps online and offline play separate. You can carry your items between the two, but not your story progress. The line’s now blurred. While there are certain missions you can’t use the option, the new “SOS Flare” options allows you to ask friends and strangers to come into your singleplayer mission and help you finish the task.

This may not sound like much until you realize that multiplayer missions are tied to single player progress from what I’ve experienced. There are no guild and town quests as before, just story quests and optional quests. Naturally, you can’t do quests above your own story level, but you can go down and help friends… or even strangers. Unlike in most MMOs, fighting even “lowbies bosses” pays off: You still get some money and consumables, and having spare monster parts allows you to craft and play with weapons you might not have otherwise made.

Jumping into someone’s “SOS” signal feels, well, heroic. I’ve yet to have anyone explicitly thank me, but I’ve jumped in just in time to help people get in the last few hits on a monster (which does scale with the number of player present). It also sucks when the player does an easy quest and doesn’t ask for help till the last minute, but oh well.

Online connections, so far, aren’t the best, though. It could be on my end, but I have a private connection and my modem is next to my Playstation 4, so I doubt it. What happens is, for whatever reason, the game will have trouble connecting online even though my PS4 friend’s list is functioning. I don’t get any major lag or tearing when I’m online, though sometimes I notice people warping a tad.

I’ve also noticed there’s some issues with joining friends. There are some extra menus involved, and you may even need to use a 12-digit code to find the right room to join, but as a Nintendo fan, I’ve seen much worse. We’ll see how it plays out once I’ve had some time with the non-reviewer community! 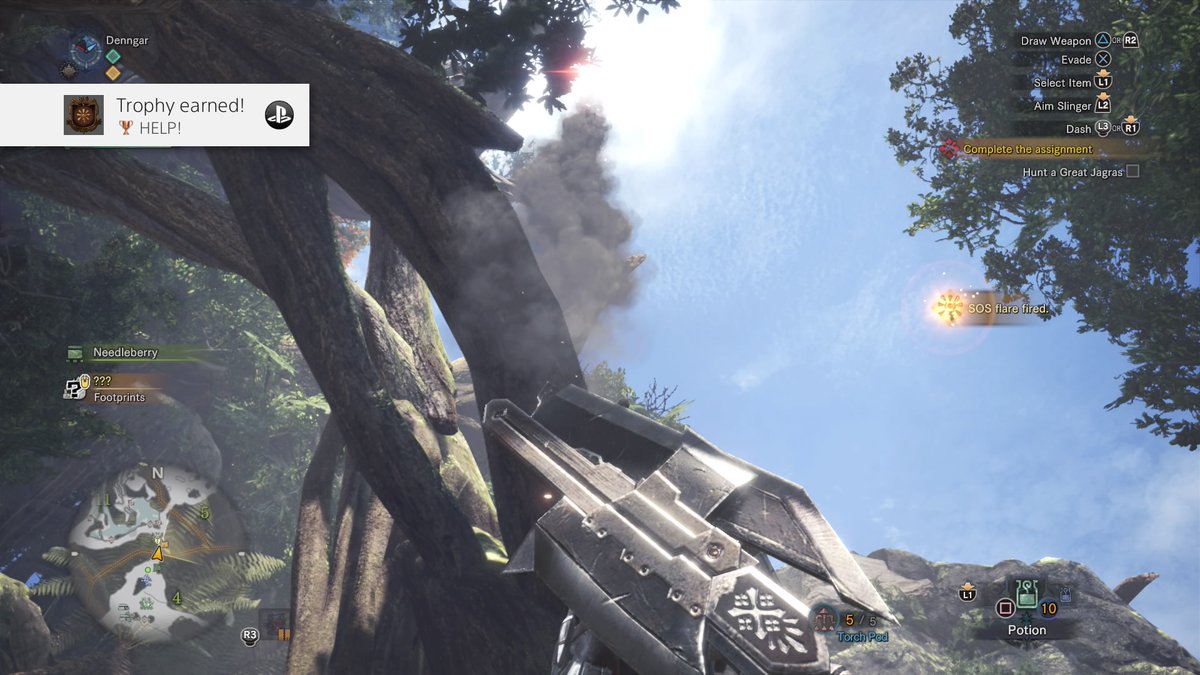 I feel like I say this a lot, but really, this Monster Hunter is the most accessible yet, especially for MMO fans. Get your friends together, start your story quests, send out your SOS Flare, and get partying. Item gathering and management are light-years ahead of the slow progress the series had made over at least the past seven years. The tutorial experience is MMO-like, but the “endgame” and “newbie” experience should up match as good as the rest of the series: What you learn to do from your first few missions are the same as what you’ll do in your last ones.

There’s no PvP, the game’s housing is very simple, fast travel and “class”/weapon changes are painless, and the monsters… well, those hurt, as they should. I’ve still got a lot to look at, and our own Matt Daniel will be doing a deep dive from a MH veteran’s perspective, but MMO fans looking to casually get that “raid” feeling without having to grind can certainly enjoy the game with their friends as soon as they start the game.

I want this real bad, but holding out for PC.

Game is amazing, multiplayer is an obscenely convoluted experience. They need to fix that badly.

Is this an MMO?

Sadly not. If you like doing dungeon runs and boss fights with action combat, it’ll scratch the itch, especially if you want environmental interaction. I played with a guy that shot a bunch of rocks hanging from a vine and they fell on the boss. I should have taken a picture!

You can start a group with randoms though right? Like any lobby-based game?

Yes, kind of. So first you go into “online mode” and that places you in something like a chat room (with randoms, just squad members, or you can make a private one). From there, you can join other people’s quests or make your own. I think the one exception is the SOS Flare option, as I tried a private session with friends but could see LOTS of SOS signals from people who clearly weren’t my friends.

I like the sound of the SoS feature. But my question is, how do you communicate with the other player? Presumably on the PS4 it is voice chat? What about for the PC, I wonder?

And, I suppose it isn’t a persistent world where you can play online exclusively?

Voice chat is the main option. If you have a keyboard attached to the PS4, that’s a good option too, since using the controller to type is a pain. However, there’s also preset phrases and automatic phrases (i.e. when you mount the monster, you’ll automatically tell your group that. Bonus tip: slow DPS during that time, since the mounted player can surgically target break points and you don’t want to accidentally knock them off the beast)

Edit: Oh, and no, the world isn’t persistent. The stuff you get is, but it’s more like queueing for a dungeon. The map are much larger and more open than previous games, but it’s still not an MMO. If you want a real Monster Hunter MMO, you’ll have to play the Japanese or Chinese language ones, which may require at least a VPN program >.<

To add: those automatic phrases are also translated into the native client of the person seeing it, which is pretty handy.