As I said at the time of my ESO PAX experience, “I got to spend maybe 15 minutes in Murkmire while in a crowded, loud room at the Hard Rock Cafe.” That means that my impressions of the new Elder Scrolls Online zone were a little less than having a quick look around. I didn’t have time for quests. I didn’t have time to really feel out the aesthetics. Although I had a headset, I really didn’t get to hear the ambiance. And if I used that experience as my first impression of Murkmire, it would have certainly failed. So it’s a good thing that Murkmire is on the public test server right now.

END_OF_DOCUMENT_TOKEN_TO_BE_REPLACED
In this second time in Murkmire, I really had the chance to look around. And of course, I had my own computer, complete with sound-dampening headphones, so when I stepped into the swamp, I could really get a feel for the environment. On top of that, I had context for the mission I was running, and I had time to listen to the dialogue.

It’s also very hard to look at this game completely objectively because I’ve been immersed in it for quite some time now. I’m not ignorant of the game’s flaws, but I have learned to look past many of them. That said, I am interested in giving multiple perspectives for this DLC. What would a new player notice about this DLC? What would a veteran notice? And what would a returning player notice? 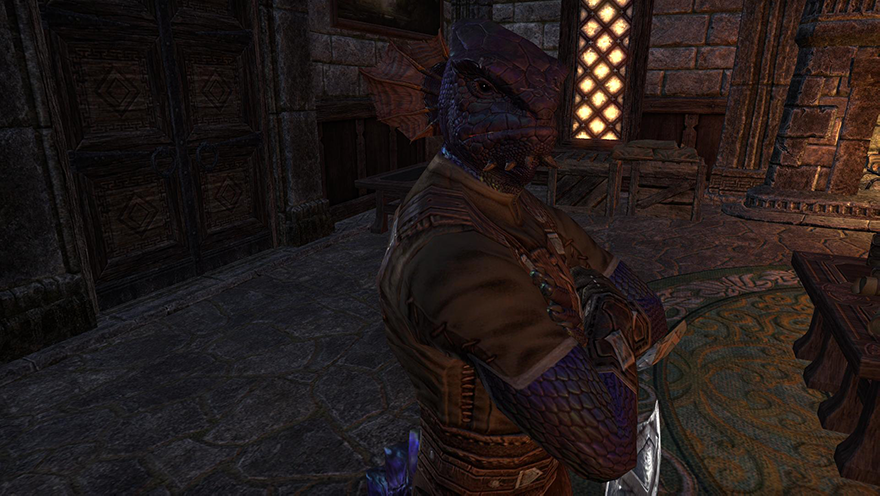 I was actually surprised at the location of Murkmire. I had suspected that it would be more inland and really deep in Black Marsh. Instead, Murkmire sits on the southern coast; part of it is easily accessible from the ocean. Given the nature of the questline, which I will get into later, I agree it makes sense that we aren’t completely buried in Black Marsh. But being on the southern coast, its contact with the other races and nations of Tamriel has likely been limited.

As far as the scope of the zone, I would compare it to the average size of a zone in ESO, maybe slightly smaller. It’s not as small as the Gold Coast or Abah’s Landing from the Dark Brotherhood and Thieves Guild DLCs, respectively. But it’s comparatively smaller than Orsinium. As long as there is enough to do in the zone, I’m not going to complain too loudly about the size, only to say that the impression I had from the developers is that it was going to be quite a bit bigger. (I could make a size comment here, but this is a family-friendly website!) 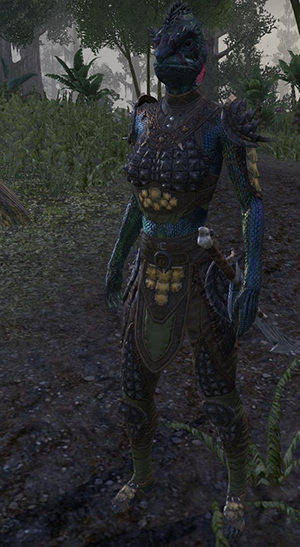 When you first land in Lilmoth, you are immediately greeted by Famia Mercius. Given her name and appearance, I can only assume that she is Imperial. She is also an Argonian enthusiast. She’s looking for some help finding a crystal in an ancient xanmeer outside Lilmoth. During the mission, we fell into multiple traps, one of them causing the floor to crash under us and the party getting separated. The rest of this first quest is a mix of finding the other companions, fighting monsters, and solving puzzles.

The puzzles were by far my favorite part, and I hope that the ones in that first dungeon were only a taste of the puzzles we will see in future quests. Of course, the puzzles were simple enough in the first questline; my hope is that they will get more complicated. There isn’t a lot of need to sneak around in the first questline, but I did play for a little bit past that one, so I can tell you that a questline or two do require that you utilize some sneaking around.

I will say I am having a bit of trouble wrapping my head around some of the character motivations — mostly the Argonians. Famia’s motivation is simple enough: She wants to preserve Argonian history, even though the Argonians themselves couldn’t care less. Xukas, one of the primary Argonian characters, has unclear motivations, but he does seem like a good guy by helping you out and expressing how much he wants to help Famia. The Naga Jaxsik-Orrn appears to be on the right side of it all too, but she doesn’t want help in her quest. Lastly, Kassandra is clearly a bad seed. She’s an Argonian with a human name, and she’s super cagey and manipulative.

The Argonian voice acting appears to be a little stiff, but that might be intentional. I think I recognize the voice of Xukas, but I couldn’t get Jon Bailey to confirm it via twitter. Let me know what you think. 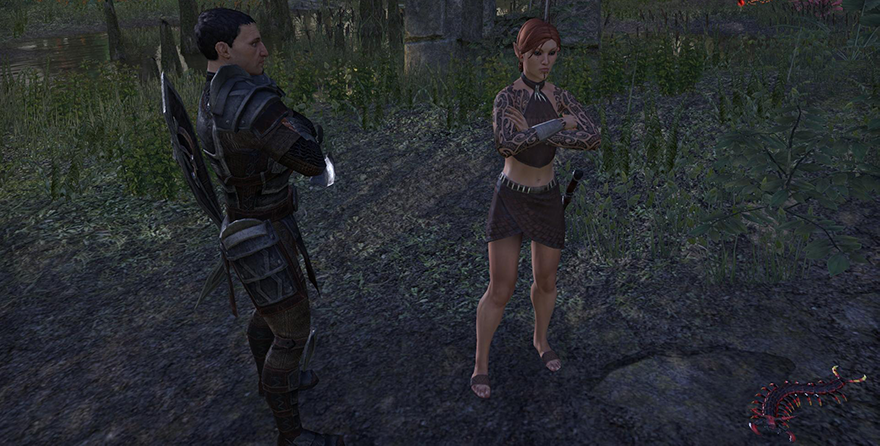 If you’re new to Elder Scrolls Online, then Murkmire would be an interesting place to start. Unlike the first part of the game, Murkmire uses almost all of your regular skills. It also touches on most of the mechanics that were added after the original quests were put in. A returning player might see the dive into Argonian lore very interesting, and the story’s not so bad either. However, if you are a veteran to the game and aren’t really interested in new storylines, then Murkmire could ultimately be a bore because it’s more of the same. Personally, I’m a fan because Argonians are fascinating to me. But ultimately, I will leave it up to you. Let me know your thoughts in the comments below.

So more of the same… got it

I actually wanted a full Chapter for Argonians since I saw that Dark Brotherhood location where you go to wonderful Argonian temple and the swamps/jungle was so mysterious :)

Colin Henry - August 11, 2020
6
NOW STREAMING LIVE ON TWITCH
OFFLINE - SEE YOU NEXT STREAM!
NEXT MOP STREAM
No events to display.

The Daily Grind: Do you play MMOs with ‘rested experience’ in mind?

The Daily Grind: What moments do you feel people have missed if they haven’t played your favorite MMOs?

The Daily Grind: Do you play MMOs with ‘rested experience’ in...

Epic Games is suing Apple (and probably Google too) over its...