Well, here we go again. This Friday is time for Final Fantasy XIV fans to sit down and find out what the next expansion will look like. Sure, we haven’t technically been told that we’re getting a new expansion at all, but we all know it’s happening, it’ll release some time around mid-to-late June, we’ll be ready for it as 4.5 rolls around, which will probably be split into a two-part patch… you get the idea. It’s predictable.

END_OF_DOCUMENT_TOKEN_TO_BE_REPLACED
What’s less predictable is where we’re going, what new jobs we’re getting, and so forth. That’s actually part of the fun of this last ramp-up. We know it’s approaching and we know some of what’s going to be contained therein, and now we get to make our real guesses about what’s happening and where we’ll end up. So what comes next? I don’t know. But I’ll guess about it, and then we can all spend next week either congratulating me on getting things right or laughing at me for being so desperately, desperately wrong. 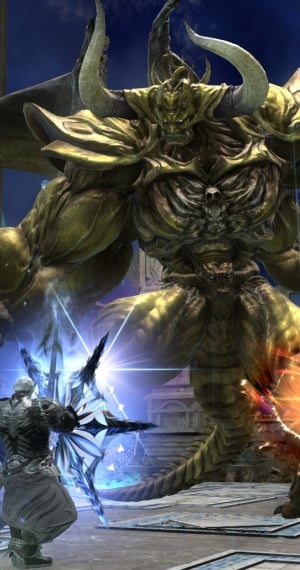 First things first, I fully expect that we’re getting a tank and healer this year. In fact, I would only expect that we’ll get a DPS job if we get three jobs instead of just two… which I would honestly give even odds of at this point.

We’ve never actually been told that we’ll get the same number of jobs every year, and the workload for how many jobs we get has varied wildly from year to year. When Heavensward was approaching, it combined the launch of Ninja with three jobs, and that was obviously far too much. Stormblood gave us two new jobs, which seems to be fine. But with only two jobs for this expansion and time to work, are three jobs in play?

Possibly. But my minimum prediction is still for a tank and healer, with another DPS job as a possibility but not a certainty.

My personal favorites for this year include something hammer-related (especially after Nero’s little stint with his gunhammer) and Geomancer, although whether Geomancer would be a healer or a DPS could really go either way. Curiously, nothing else stands out to me as actually hinted by the game or the lore up to this point; we certainly don’t have someone like Alisaie hinting at a new job in a roundabout fashion. We probably won’t know all of the jobs we’re getting after this festival regardless, though; Yoshida’s shirt will just give us an idea of what the right track looks like.

I may be in the minority here, but I still don’t feel like we’re heading toward the heart of the Empire. At the same time, my personal feelings about Meracydia don’t have any textual support either; it’s just a feeling without any actual justification, something I feel is going to happen based purely on a gut reaction.

I absolutely refuse to claim that this is a good way to run predictions, though. “I’ve just got this feeling” is the equivalent of concentrating really hard in the hopes of becoming a psychic while looking at a slot machine. If I can’t explain why it feels right beyond it feels right, I don’t have much ammunition.

There is a lot of musical reference in this article.

That having been said, it still feels like we’ll not be going into the heart of the Empire. So my predictions are gently split. It’s totally possible that we’ll be running along the southern edge of the region, in places like Ivalice and the like. While it would be odd to go to Ivalice as a zone right after raids in the area, it’s certainly plausible; it’d give us an opportunity to use Thavnair as a home base.

It also seems possible that the expansion will be more metaphorical and offer a different experience; exploring new regions or new versions of regions rather than traveling far afield in Hydaelyn proper. Along the lines of Wings of the Goddess, albeit hopefully without the time-travel nonsense that expansion used for a plot.

Regardless, I feel like Radz-at-Han will be the new city, and I also feel as if we’ll not be confined to just one new region; Ala Mhigo and Othard added a lot of diversity to the game, and it wouldn’t surprise me to do the same again. I do expect we’ll stick to about six zones, though, so more than two continents feels unlikely in the extreme.

Yes, I expect another ten levels with five new traits and/or abilities for every job. Probably leaning a bit more heavily on the trait side of things, barring another purge of unused abilities. (And we’re low on particularly unused abilities at this point.) This is mechanically just a thing that we’ve come to expect by now.

A few jobs are due for some rather thorough reworking and improvement with the expansion; we’ve had it hinted that Dark Knight, Machinist, and perhaps Summoner are all being closely examined for some major gameplay changes. Personally, I think that Monk is overdue for the same, and both Ninja and Scholar could stand to have some tweaks. And that’s not counting the fact that White Mage still has a pretty useless job gauge…

Having said all of that, I don’t think we’re going to see the same level of top-level sea change that we saw with Stormblood. That was, in part, a rewriting of every job to work with job gauges; while I imagine that will still be addressed and expanded, it seems unlikely that they’ll be getting so widely rewritten one expansion later. So while the aforementioned jobs will probably see some adjustment, a lot of the tricks will probably be later abilities, like giving Paladins more tricks for the Oath Gauge and so forth.

Yes, I say this every time, but I really both hope and wish that this will be the expansion when we get a little more character customization added into the game. It’s still upsetting that any given Ninja plays identical to any other Ninja, and while the different jobs all play well it’d be nice to have some tweaks and customization along the lines of what was done with Merit Points. (Not quite the same as Merits, of course; that would be kind of pointless, as Merits were added to deal with an unchanging level cap and make you perpetually level.)

We’ve gotten a lot of good systems and updates with this expansion, so there are fewer elements that are transparently in need of good updates or something to address obvious deficiencies. It seems likely that things like the Deep Dungeon will carry forward, while I doubt that we’ll see another segment of Eureka in the next expansion. But I also expect something to be teased as a big new change, some form of content that’s different from what has come before, just like exploration missions and Eureka.

My other big guess is that we’ll see at least some conversation about housing and availability, which has been a consistent issue as well as a flashpoint for this year. I don’t expect an entirely new housing district, but something new in terms of housing systems would be welcome, even if it feels a little bit overly optimistic. After all, they just added a bunch of additional wards all over again…

Feedback, as always, is welcome down in the comments or via mail to eliot@massivelyop.com. Next week, we’ll be reacting to what we learned and we can all laugh at what I got wrong, so that’ll be fun.