Population Zero caught out attention at the tail end of last year when developer Enplex announced the survival MMO was hitting pre-alpha and opening up founder packs. As we wrote at the time, the game aims to distinguish itself from other multiplayer survival titles with features including a hand-crafted world, factions, a “refined” guild system, easy-to-learn crafting and building, and narrative storytelling inspired by classic science fiction. Most recently, it explained its detailed character evolution system, and there’s an alpha session this weekend.

Today we’ve got an exclusive dev vlog from Enplex that dives into the game’s perk system, another layer of progression and customization for characters in the sandbox. Enjoy!

Population Zero is an MMO-survival game, where hundreds of players band together in guilds and factions, fighting for survival in PvE and PvP battles, building their homes from scratch and exploring an unfriendly alien world. Everything goes awry after their colonist ship mysteriously explodes before being able to land on the planet. Throughout the game, players perform many actions (building, crafting, gathering), they fight, they delve into the world full of mysteries.

Throughout their adventures, players will upgrade their characters in many different ways, but one of the most unique is our Perk System. Each and every activity a player partakes in on Kepler could grant them a new perk to equip. The Perk system allows players to perform many action much more efficiently.

There are conditions which need to be fulfilled in order to get each perk and they are hidden from the player. Besides this, perks vary in their value and obtaining complexity. In essence, how good or helpful a Perk can be is a randomized “drop” when it’s unlocked. And when you die or are killed by an enemy player, you can drop your perks. Of course, we are toying with ways for players to insure their perks, and finding new ones is always an option as well.

How do perks affect the character?

The conditions for obtaining these can be quite different and unexpected. From «kill 100 alien animals» to «stand on the highest mountain’s top of the initial biome for several minutes» (Are we serious? We’ll let you decide!). The same perk can be earned in multiple ways.

In general, the probability to obtain a perk is regulated by a complex system. If you don’t receive a perk for a long time your chances of obtaining one will increase.

A Perk can be temporary, permanent and saved. What does this mean?

Obtained perks start affecting character instantly and the number of these perks is conditionally unlimited. Such perks are called temporary. The major difference is that character loses temporary perks when they die.

Perks that you consider the most valuable can be converted by the player into permanent. You will not lose these perks in the event of untimely demise. The number of permanent perks is limited and you will have to think twice before making one of them permanent. Unneeded perks can be dismantled for special resources.

Saved perks are also will not going to be lost in the case of character’s death. Though these perks do not affect your character. They exist in the virtual storage, because they’re not currently equipped to your character. 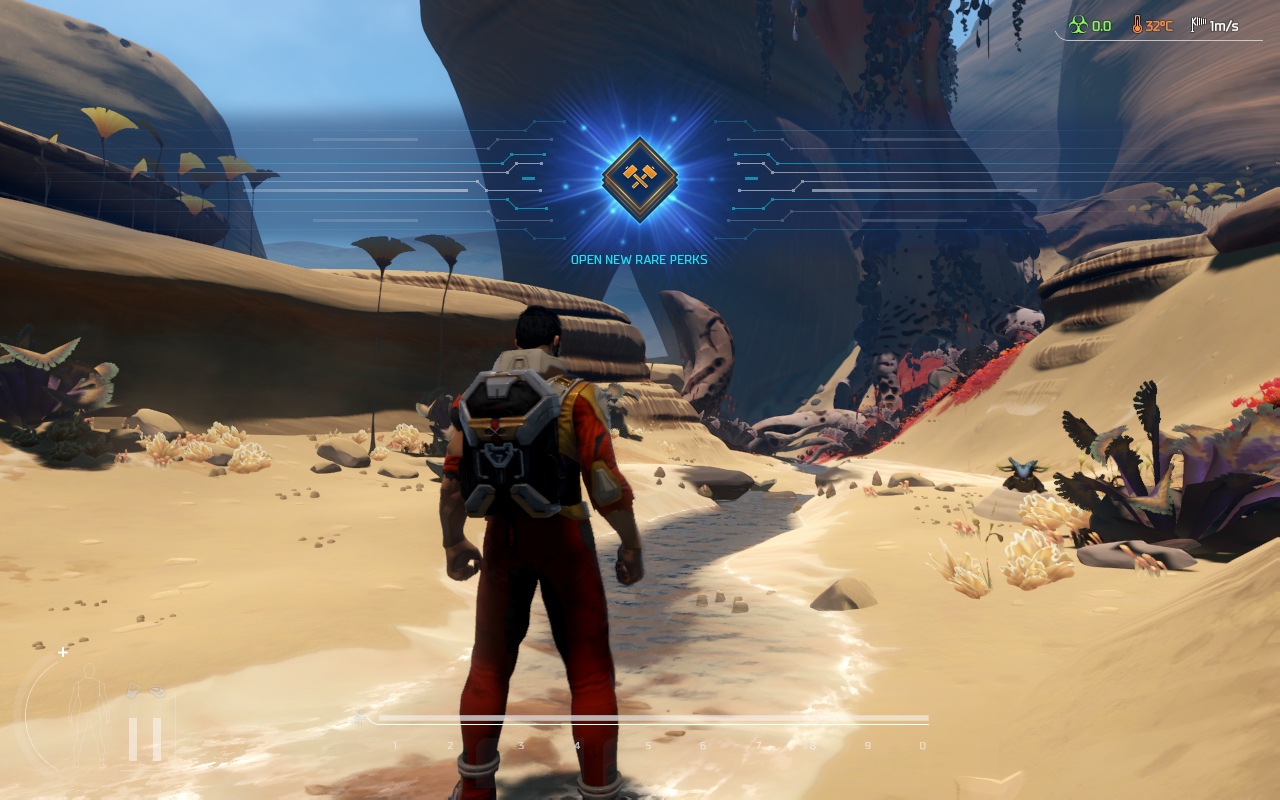 The player didn’t have any free yellow slot for a new perk, so he bought one using R1 resource and placed there «Accelerated Wound Dressing», making this perk permanent.

The player dismantled the temporary perk «A chance to stun Kvar» and received R2 resources.

Later the player went to chop some Bractus and got the violet perk «Thrifty Earner» that decreases hacking tool deprecation. But the player wanted to get «Axe Damage Increase», which is obtainable after completing the same requirements (the player got this information from the Database which was filled based on the results of other player’s researching). 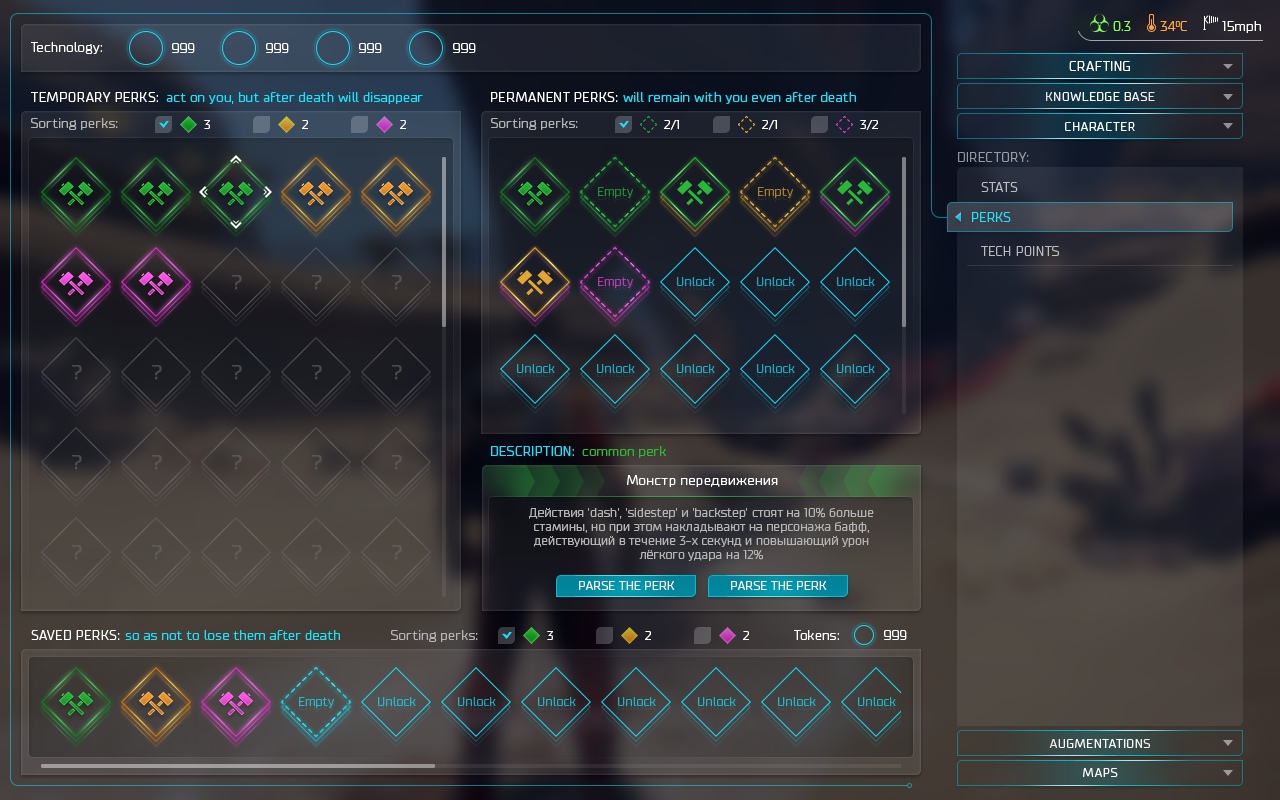 Saved perks stop affecting the character, but cannot be lost after death.
The players continued to chop Bractus (he desperately needed resources!) and finally achieved the desired outcome.

The player had a violet slot that was occupied by something they didn’t need. The player freely dismantled this perk for R2 resources and replaced it with a «Axe damage increase» perk.

That’s all for now. We have just taken a peek into the key and basic concepts of a character evolving. It’s important to mention that these mechanics are not final and may be changed in the future based on player feedback. Though the general principle will remain the same – perks significantly increase effectiveness of your character and help make them unique in a world filled with other survivors.

Be sure to sign up for Alpha and take a look at our Founder Packages, if you want to guarantee your access. Thanks for reading!

We’d like to thank the team for sharing its dev blog with us!