It’s not quite launch for The Division 2 (that’s tomorrow), but the game has dropped in a nice solid patch to fix lingering issues ahead of the full launch. The biggest fix is for the Castle bug, which was allowing some players to reach the Castle earlier than intended and thus get stuck and unable to progress. The patch also removes a weapon that was not meant to be fully released, fixes exotic weapon sounds with silencers, fixes a loot exploit, and improves NPC reactions to thrown grenades.

Of course, patch or no, players will need to have the game loaded up on their machines and ready to go, and the game’s developers are here to offer a guide to when you can preload the game that may or may not resemble the vast network of conspiracies surrounding Pepe Silvia. But it does contain useful information along the way, so that’s good. And some folks are already in the headstart, so they may presumably ignore any further Anthem-style hoops to jump through. 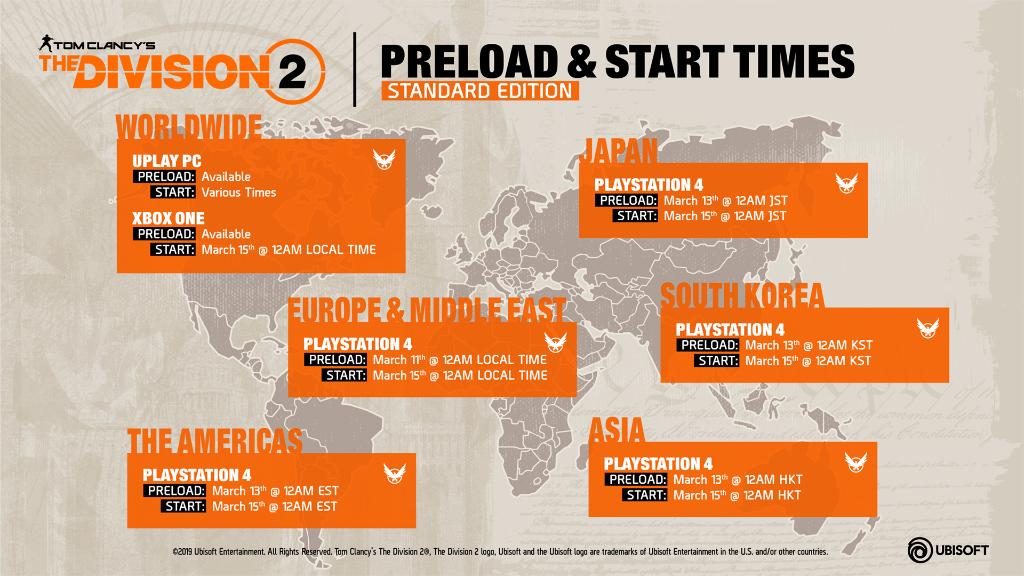 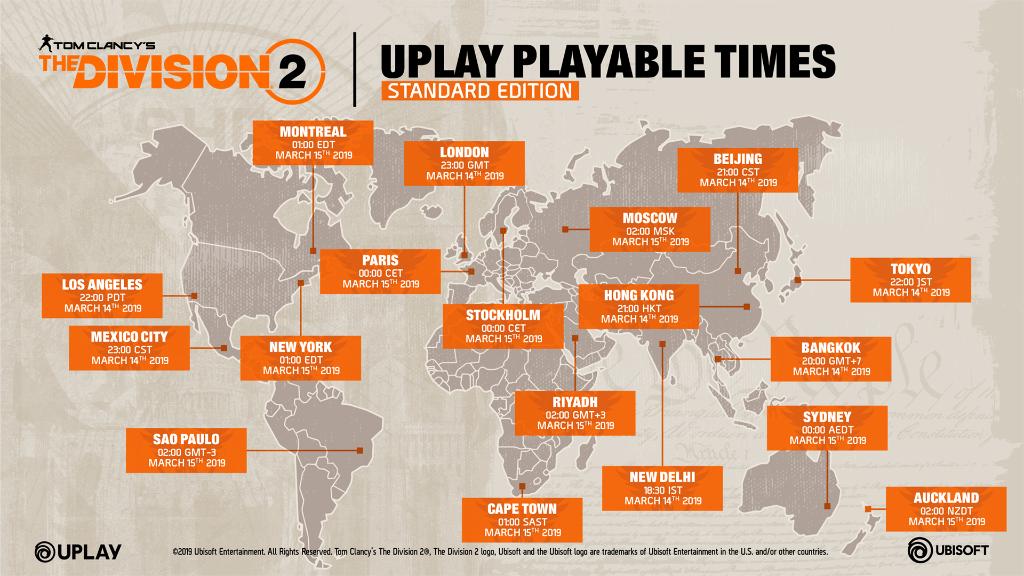 There is a known bug; if you have a Logitech headset with Dolby you have to kill the Logitech gaming surroud procces to get the game with sound.
More info:

Fix for No Sound for those with Logitech Headphones from thedivision

My brother just played or tried to play through the very first mission on the Ps4 Pro and omg the lag and glitchiness was almost unbearable. Like this dude played thousands of hours in the division 1 and had to stop after the first mission because of lag problems…

I find nothing remotely confusing about it either. I don’t want to sound like I’m insulting anybody but it really is quite clear…

If someone was to find it confusing I’d try to tell them to simply ignore all the times that have nothing to do with their area. Maybe they’re looking over the entire thing and feeling that it’s confusing. It really isn’t :P

Yep. What time does it start for me is all you need. No need to study the times for the entire planet.

If a friend plays in another area they look and see that it starts at X time for them.

The infograph doesn’t seem confusing to me, and you know I’m not an Ubisoft employee/sympathizer, Armsbend.

Want to avoid the confusion? Wait until next week to buy and download the game. Problem solved!!! You’re welcome.

Instead we got two unreadable inforgraphics on a horrible color scheme (orange and white might be the worst color combo ever). Not only did they type out ‘worldwide, americas without including NA..for fucks sake why go on? This infographic is a botched wire hangar abortion.

I bought the damned thing so I truly don’t care – it is just a ridiculous, humourous example of how poor Ubisoft’s marketing team is. More for pointing and laughing than any real care. What a bunch of complete incompetents at their job.

The only thing more funny is people rushing to the defense at a marketing crew so very, VERY bad at what they do.

I don’t know anything about this stuff. I pre-ordered from Gamestop. (I know, I know)

My local Gamestop is doing a 9pm release for the pre-orders so I’ll be playing tonight instead of tomorrow.

If Steve Martin ever gets accused of “Me Too”, I’m totally done.

Something about seeing this made me think about that, I dunno why.

Bruuuuh . . . unless Steve Martin did a guest bit, the Unfrozen Caveman Lawyer was Phil Hartman RIP.

Ironic to be worried about him being #MeToo’d, when he was straight up murdered by his wife

It was always Hartman. It was the worst skit in history if it weren’t Phil Hartman doing it. Best SNL cast member of all time. hate his murdering wife for killing him. He really never got to do anything past SNL besides the fantastic short lived News Radio – what a goddamned shame.

That depends on which edition you have purchased and / or where you live. Having the game on your PC early doesn’t let you play early, only if the edition of the game that you pre-ordered comes with early play.

You’ll find your play time on that chart above, but you won’t get in any earlier by having the game. Also a lot of times now Gamestop only gives you a download code rather than an actual DVD to install. Even if it is a DVD it’s going to probably be an earlier version that needs some big patches. So more than likely you’ll be downloading tonight and playing tomorrow.

“Having the game on your PC early doesn’t let you play early, only if the edition of the game that you pre-ordered comes with early play.”
====
I’ll probably be able to play. They do this quite a bit and every time with these pre-order “night releases”, I’ve been able to play without having to wait until the official “12:00 am” day change even with stock versions of the game.

I remember with some traditional MMOs, it was the same thing quite a bit. You bought a regular edition expansion or something, and wasn’t supposed to be able to get in and play until hours later, but companies would go ahead and open the servers anyways.

It was always funny because people would log in later and say “What??? You mean I wasted hours waiting until the EXACT time?!?!”

I’m not one for good old days nostalgia, but jesus, those were the good old days when it was “Game is releasing at X time (GMT) for everyone”

No wait, I’m Americas. Wait, does that mean South America? Ummm…is North America behind the Middle East? Why?

Thanks. I’m going to ask my boss off for various times tomorrow.

7 hours left to purchase it on GMG, before they’ll have to stop sales due to Epic’s exclusivity.

Big publishers really should move away from these charts. I get that they are trying to stagger the release to prevent bottlenecks but really the marketing look is much worse.

I saw this on the official the other night and without going in Chrome settings the print was so small and crowded it was impossible to even read – much less decipher.

Just curious (I have no ball in this game-just not for me) but how exactly do you not fully release a weapon ;)?

Having incorrect performance and a placeholder name, something that shouldn’t have been released as it’s not finished.

The Daily Grind: Would you do MMO quests if they didn’t offer rewards?

The Daily Grind: Would you do MMO quests if they didn’t...