Somehow I hadn’t heard of Eden Rising until it launched out of early access as a free-to-play title, so to me at least it seems like it came out of nowhere. Its colorful screenshots, co-op focus, and exotic sci-fi setting quickly caught my attention, though, and with no monetary barrier to entry, I had no reason not to dive in.

I keep wanting to call Eden Rising a survival game, but I’m not sure that’s exactly right.

It has a lot of the trappings of a survival game. Its minimal backstory has you as a human explorer stranded on an alien world, tasked with restoring the facilities left behind by some long-gone progenitor race.

It’s very much a game of starting from the bottom. You’ll spend much of the game exploring and gathering resources, and all of your items and equipment will be things you craft yourself.

However, there are no hunger, thirst, or other true survival mechanics. This has the effect of making the game feel far less chore-like or punishing than the average survival game. For me, that’s a big plus, but fans of more unforgiving survival titles may find themselves a bit bored.

Death is also relatively forgiving for a game of this genre. You drop the items in your inventory on death, but not your equipped items, and you can easily reclaim what you’ve dropped by running back to where you died. With a wealth of respawn points, that’s rarely a major hurdle.

This is definitely a low-stress game, which can be a pro or a con depending on your taste.

That said, it’s not completely brainless. I found combat managed to be nicely challenging and surprisingly satisfying, despite very simple core mechanics. Every monster you meet has unique abilities and behaviors; mobility and careful dodging is strongly rewarded. 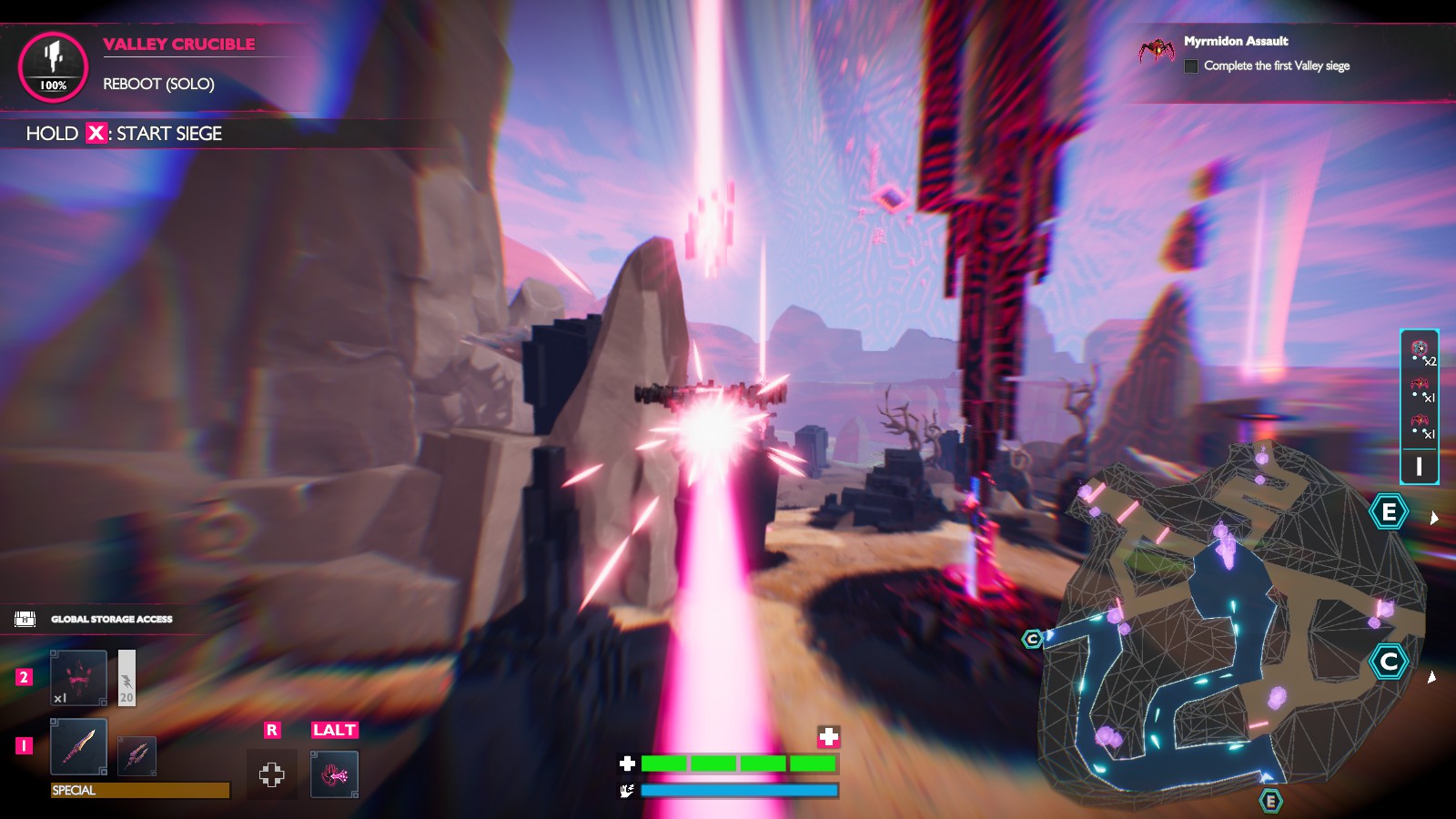 There are no classes, but different weapons have different specialties, and you can have up to two equipped and swap between them, so that adds more decision-making to combat. I was disappointed by the lack of a ranged option, but after making a sacrifice to Almighty Google, I was blessed with the knowledge that ranged weapons are unlockable as you progress through the game.

Where Eden Rising really begins to distinguish itself is in the way it incorporates tower defense mechanics. As you explore across the landscape, you’ll encounter sprawling alien ruins called Crucibles. A Crucible serves as your base of operations in a region, offering a respawn point, storage, a fast travel hub, and other perks. To upgrade your Crucible, though, you must first earn nano chips by enduring Sieges.

Sieges send waves of alien monsters to attack the heart of your Crucible, and you can build and place a variety of turrets to help you survive the onslaught. The core cycle of the game is therefore to survive sieges to unlock technology to allow you to survive tougher sieges… and so on.

An interesting mechanic related to this (that I kept forgetting existed, to my shame) is that you can also build and place turrets outside your Crucible to help you fend off mobs in the open world. It adds further options to a combat system that already did an impressive job of adding depth with very few moving parts.

Alongside improving your gear and your Crucible, you can also unlock passive perks by slaying monsters, with different creatures offering different perks. It’s a clever idea I’d like to see games do more often, and it’s another case of Eden Rising achieving satisfying depth with simple mechanics. 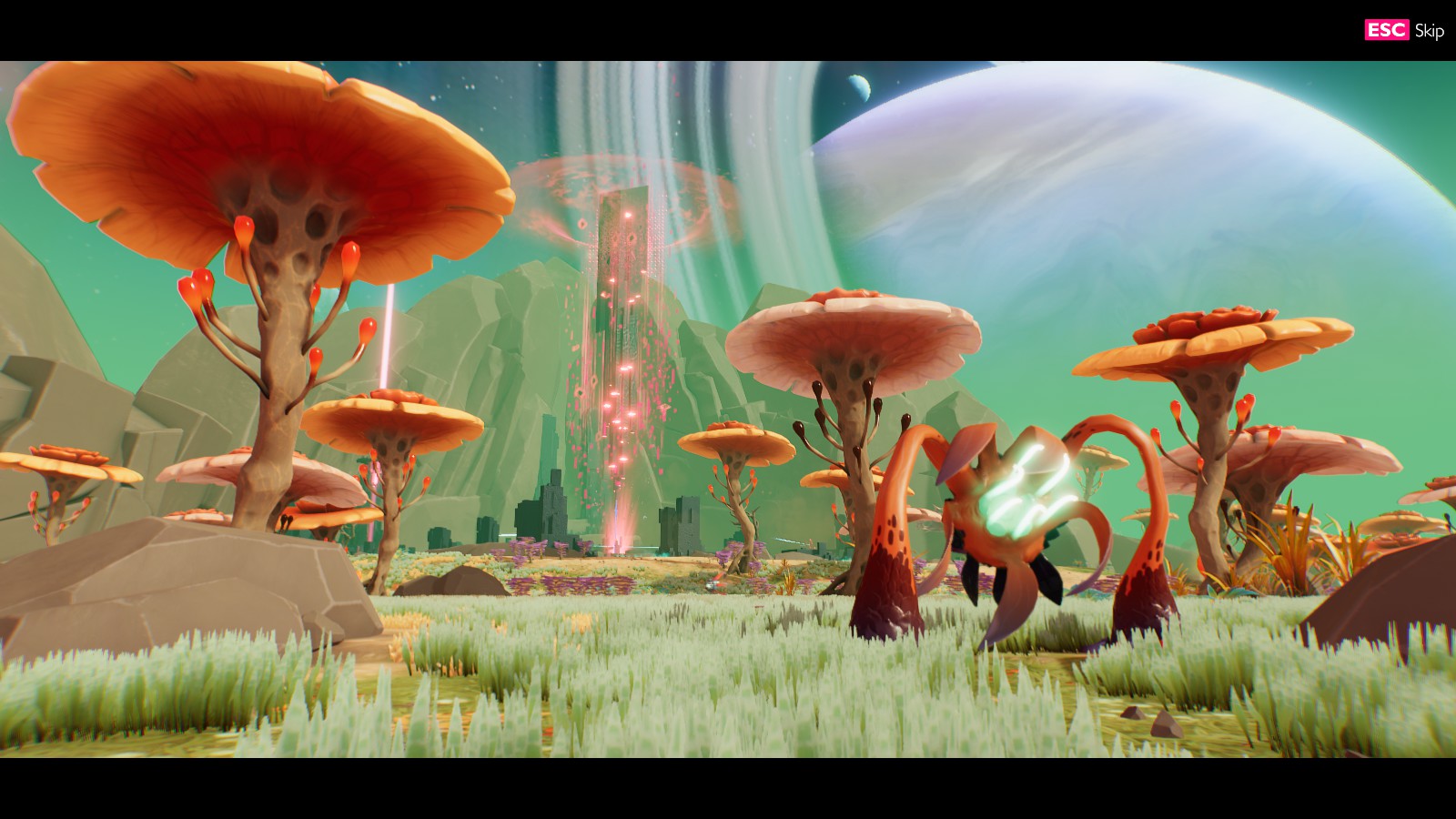 Eden Rising is very solo-friendly in the sense that most if not all of the game seems quite doable when playing alone. However, it’s clear that this is a game designed to put the focus on co-op, and playing solo will never be quite as satisfying.

To that end, I quickly invited a friend to join me. I definitely found the game improved a lot with another person there. It hits the perfect balance of being a deep enough game to keep you engaged, but casual enough to leave lots of time for friendly banter in Discord. With a server player cap of eight, this is no MMORPG, but it’s definitely a good game to play with a few friends.

Co-op play is further enhanced by the game’s wealth of difficulty settings. Not only do worlds have three different global difficulty settings, but Sieges can also be customized to Solo, Group, or Tribe difficulty. This should provide satisfying content for groups of all sizes and skill levels.

I did identify a few minor problems with co-op play. Most notably, loot is not shared, so you can find yourself in competition with your friends for resources. To some extent, I can see the logic behind this. In a game like this, finding resources is a core part of the challenge, and it could start to break balance if every player got their own drops from every node, but at the same time it does suck to find yourself more starved for resources after adding a friend to the game, especially in the case of rare and precious items like Healing Bulbs (health potions).

Also, the lack of classes hurts a bit. Co-op play isn’t as interesting when every character plays the same. Maybe this will be remedied later in the game as more weapon and item types are unlocked and there’s more potential to specialize. 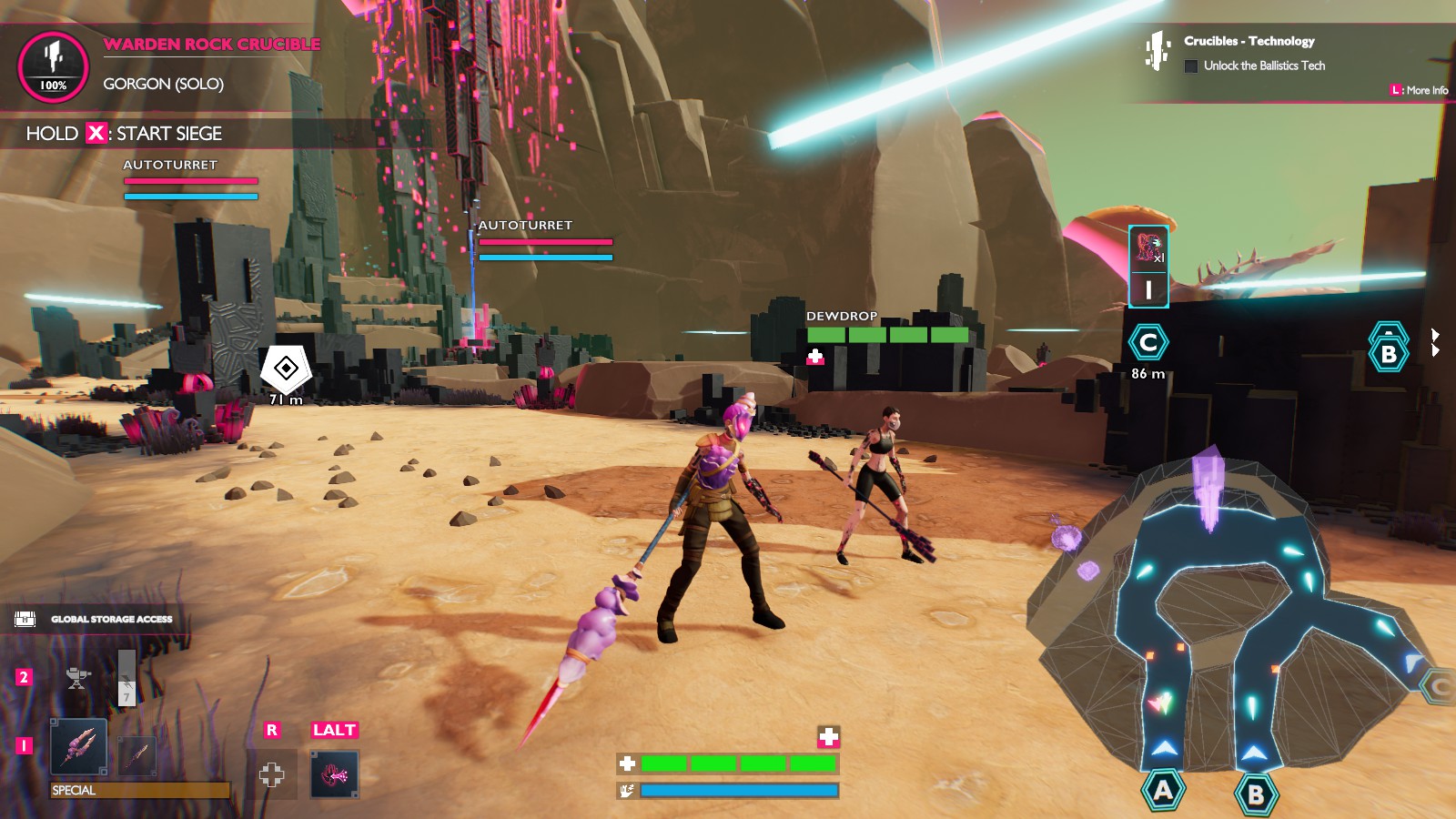 Beyond that loop of hunting, gathering, and defending, there isn’t much to Eden Rising. There is some story, reinforced by lore collectibles scattered throughout the game world, but a narrative-focused game this is not.

On the upside, the exotic locations and colorful art style make the environments pop, and it does truly feel like exploring an alien world. This is a setting I want to spend time in.

Character customization is also bare-bones, to say the least. Right now there isn’t a choice of gender; all avatars are female, though male avatars are apparently somewhere in the development pipeline. I suppose it’s a nice change of pace from developers seeing male as the default? Plus, if it helps, the model is sufficiently androgynous looking you could probably just pretend they’re male or non-binary.

The lack of character customization is a shame, but given Eden Rising isn’t much focused on story or roleplay, I consider it more forgivable than it might otherwise be in another game. What actually bothers me more is the lack of customization for Crucibles. I would have liked to have seen them more like player housing, with at least some decorations or visual customization.

That leaves one thing to discuss, and that’s the business model.

As mentioned above, Eden Rising is free-to-play, and I do mean really free. There’s no cash shop, lockboxes, or microtransactions. The only charge is for a paid “Ascendant Edition,” which includes extra zones and a few other perks. 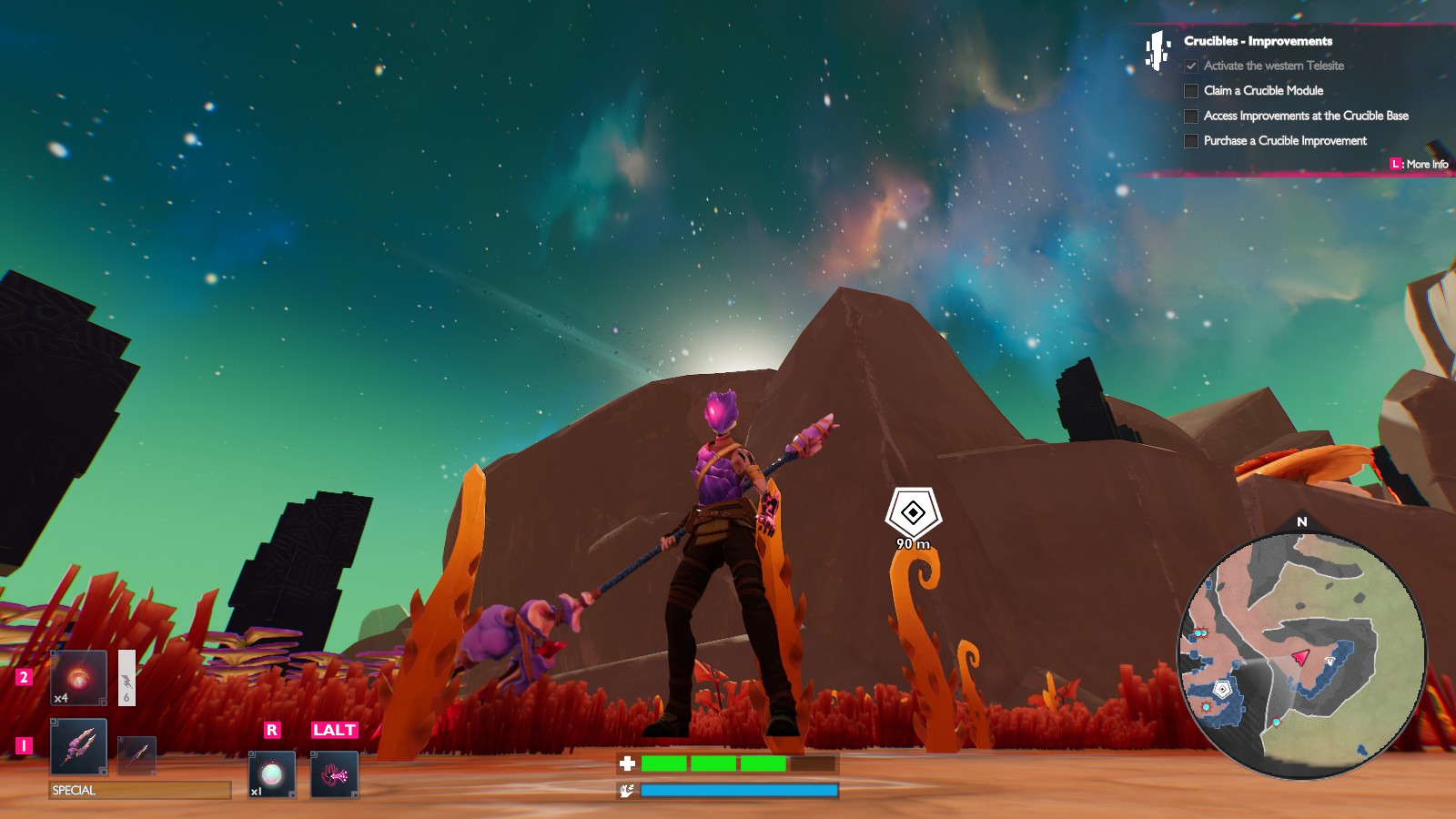 It won’t take you long to run into things you can’t access without the Ascendant Edition, but even so the free version feels very large and very complete. I do buy developer Nvizzio Creations‘ sales pitch that the Ascendant Edition is more akin to an expansion pack than a necessary purchase.

Even more generous is the fact that only one person in a group needs to own the Ascendant Edition for all of his or her friends to enjoy its content, so as long as they all play on that person’s server.

Honestly, my only concern with this business model is that it might be too generous. I’m not sure how the developers expect to make money.

Bottom line: Eden Rising is not a particularly ambitious or groundbreaking game, but what it does, it does well. If you want something low stress to play with friends, this is a good option.

Thanks for the article, Tyler. I would’ve missed this game if you hadn’t written about it. I expect I’ll check it out soon.

Free to play, stylish, in dev? Sounds like a good time to me.

TERA console patch results in massive exploit (and compensation for all)