The announcement of Black Desert’s Shai class earlier this month really caught me off guard. Sure, I thought a snow globe sprawled on advertisements for the Heidel Ball fan-event-plus-press-conference felt out of place for the summer month, but wow, I did not connect it with a new class. Regardless, I’m still so glad we’re getting another new class, especially one that doesn’t fit the traditional idea of a Black Desert character at all.

END_OF_DOCUMENT_TOKEN_TO_BE_REPLACED
Next week, the Shai joins BDO’s growing stable of character classes. Not only is it a new class, but it’s one that represents Black Desert’s seminal halfling race, also called the Shai. I’ll admit that I was a tiny bit disappointed that we weren’t getting a male dark knight with an awakening weapon focused on melee. But considering what we’re about to get, I think this’ll allow for more playstyles to approach this game, especially since she’s being touted as a support and healing-focused character. I’m happy to see Pearl Abyss and Kakao experiment with a new type of character.

I got the opportunity to try out the Shai over the weekend in person, so today’s Desert Oasis is all about that experience and my impressions of how she plays. Just a side note, the build I played is still in testing, so it’s possible some things can change between now and next week.

As a support class, the Shai gets a toolkit of healing, defensive, and resource recovery skills. She has a variety of attack skills, but the centerpieces of her skill tree are four major skills: Cheer Up!; Come Out, Come Out; Get Well; and Over Here!. These skills had long cooldowns, the shortest being a minute long. But these are powerful skills.

I can already see her main support skill being Cheer Up!. Bound to the E key, this heals allies for two-hundred hit points every five seconds for, get this, 60 seconds. What’s the cooldown, you ask? Also 60 seconds. This buff is going to be key to providing party-wide recovery. And even though it’s only 200 hitpoints, a little goes a long way with these heals. So just being around a Shai will provide a nearly endless supply of healing.

Her second major skill is Get Well. A reasonable 90-second cooldown allows for a bigger heal, 700 hitpoints “per (1) tick over a total of 3 times, for self and allies.” So the way this skill works is that each “tick” is a heal. It’ll dish out that heal three times. There’s no delay for those ticks; they proc one after the other in quick succession upon casting. For the Shai, it was enough to fill about 75% of her hitpoints. It’s a powerful heal, especially with that cooldown. I should also mention that this skill also has a “black spirit rage mode.” Think of it as a charged-up version that heals for 500 hitpoints per tick for 10 seconds.

Then there’s Over Here!, a skill activated by shift+Q and on a 5-minute cooldown. What skill warrants a 5-minute cooldown? It’s an on-demand super armor, which protects the Shai from crowd-control skills and “blocks attacks from outside the protected area for 5 [seconds].” It certainly sounds like a panic button, but a 5-minute cooldown to me feels a little too long. I would say a 3-minute cooldown should be enough, especially when the buff is only 5 seconds.

I need to mention the Shai skill Come Out, Come Out. This skill has different applications for PvP and PvE. For PvP, it reveals players in stealth. For PvE, it aggros monsters. But more importantly, when using this skill, the Shai pulls out her lamp and trots around in the most adorable way imaginable. I’m not kidding. It looks like she’s spreading joy and happiness – so much joy, in fact, that it angers those hate-filled, joyless monsters and causes ninjas to leave the shadows, their darkness washed away with the love and happiness only a halfling happily flinging a snowglobe can provide. 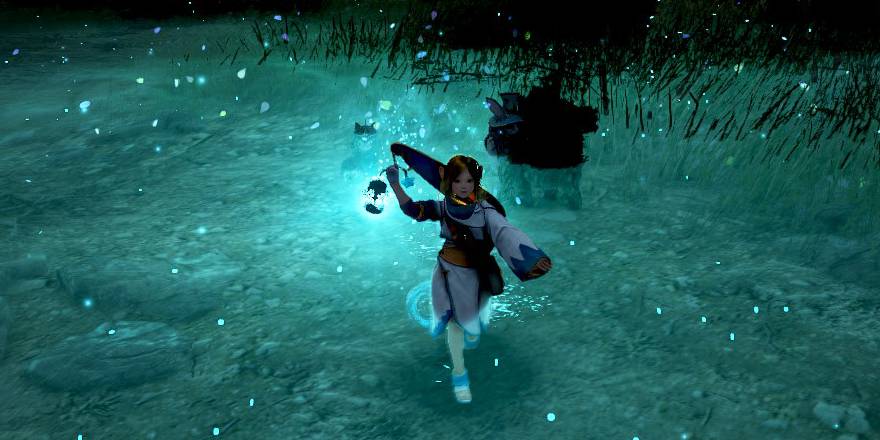 The Shai’s utility is going to be a great addition to any node war, guild war, or red battlefield team. She’ll also find a spot in parties for the upcoming horde mode, blood altar. Those who’ve been playing a while Black Desert know about savage rifts; it’s a tower-defense style mode where players have to use guns and build defenses to fend off monsters. It’s been a nice experiment on PA’s part, but players were disappointed that they couldn’t use their weapons or their character skills. Blood Altar does away with that, giving players some challenging group content while allowing players to use their skills! And considering how the roadmap promises for new PVE group experiences, I think the Shai will certainly find a fit in any party.

Of course, we’re still talking about Black Desert here, so the character needs to be battle-ready for the next two-million monsters she needs to obliterate. The Shai wields a giant boomerang called a “florang.” The left mouse button is a melee skill, but the range is incredibly short. Most of the time, a Shai player will probably use the right mouse button attack. The right mouse button and its modifiers will have her toss it in a variety of ways. Usually, holding down the RMB will let the boomerang stay in position for a bit before returning.

And I’ve got to say something about the animations: The boomerang feels like it’s being thrown with significant force. My favorite is called Twirl-Three; it’s where she puts her bodyweight behind a hard throw. She’ll wait for it to return, and instead of the Shai just catching it, the boomerang returns perfectly on her back. She’ll then do a T-pose as if saying “ta-da,” impressed with the neat trick she just pulled off. These little animations and attention to detail really add to the Shai’s personality. 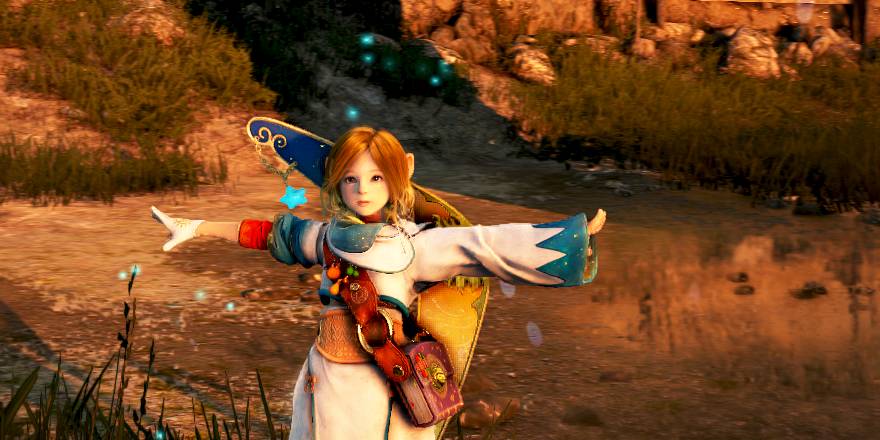 There is so much to be happy about with this new character’s release. As a tamer main, I’m probably not going to switch; the “thwack” of a bo-staff is just so much more satisfying for me. But for players looking for an absolutely adorable character with some really good support skills, then you can rely on Shai.

The Great Valencian Black Desert is a dangerous place, but thankfully there’s always a chance for respite. Join Massively OP’s Carlo Lacsina every other week for just that in Desert Oasis, our Black Desert column! And don’t worry; he promises he won’t PK you. Got questions or comments? Please don’t hesitate to send a message!
newest oldest most liked

I’m excited about the Shai release. It’s definitely a different direction class and has me wondering what’s on the turnpike for BDO (in a good wondering kind-of-way). Character creation is fun and I get a lot of relaxing enjoyment out of creating new characters in BDO. It’s seriously meditating.

Looking forward to the new donkeys, too. I love that they’re putting in an ability for all characters to use that allows them to travel without being attacked. I plan long-distance travel times around making dinner and other RL stuff, and I hate having to keep an eye on the computer for player attacks.

It seems like she has the utility of Wizards (Protected, Healing Lighthouse), with extra utility on top, and less grinding power. Cheer Up! alone means the party doesn’t need potions, that’s massive.

But other than limited party play, it feels like this will be a character mostly for crafting.

Indeed, that’s how I saw it too. Since she has two of her lifeskills at professional, she’s definitely a good way to get people caught up on lifeskilling.

Meanwhile my Baewha gets the shaft in pretty much every game mode and PA does not give a single shit.

Gotta get those new class costume/bagspace/weight/etc… bucks though.

That was/is my concern about this new class addition too. We’re at 18 now, adding a new class makes balancing even more difficult.

My tinfoil hat theory is that they’re going to depend on shai and her support to bring the other classes in line by her mitigation power.

People in PvP/Siege/Node Wars have been crying at Wizards and Witches since day one with Protected Area. The #1 consistent call by them all is nerf Protected Area. Adding another class that PvP will be centered around for defensive buffs is just weird.

Plus they pretty clearly hinted at the Heidel Ball that it was mostly meant for PvE support because they want to do more PvE focused content. Content like the upcoming Blood Altar or the absurd 700+ Gearscore area.

A constant heal every 5 seconds for 250 hp? Healing Aura heals 20% of you and one other person’s HP every 10 seconds on a Wiz/Witch.

A big 3 heal tick every 90 seconds? Wowee. Oh wait Wiz/Witch has Healing Lighthouse on a 30s cool down and heals about 700 health x3.

Oh but that 5 minute defensive cool down you say! Protected Area’s 2.5m cool down, 999 DP add, and basically immunity to CC would like to have a word with you.

Any attack or cast buffs? Wiz/Witch’s Speed Spell adds 30% attack/cast/movespeed for 30s with a 50s cool down.

How about that Taunt move though, so cool there’s someone who can taunt! Taunt just like Magic Lighthouse has been doing since game launch over 3 years ago on Witch/Wiz.

Such a brand new way of playing the game.

Don’t worry, the devs will make sure new class is highly desirable by nerfing witch/wiz asap.

They actually just buffed them and their damage about a week ago because people were complaining how ineffective they were in grinding locations. Now they’re pretty crazy by comparison to other classes and still are the backbone of the siege/pvp/group game.

Let’s hope awakening makes a difference because that would be a really bad oversight on their part for a character they already expect people won’t play.

That’s what I’m banking on too. Makes me wonder if she’s going to be hitting folks with a lute too.

Another tinfoil theory here, but I can see her as a back-line character while wizards and witches pick up the role of mid-line fighters. /shrug but that’s just a theory.

Will just be an energy and storage mule

Suddenly, a Shai becomes mandatory for every good group because there are no support alternatives in the game atm. My secret hope, though, is that the Shai is just a precursor for more focused PvE content.

Wizard/Witch can do most of what Shai provides already, but with a kit that also has good damage.

Pantheon: Rise of the Fallen shows off the Shaman and discusses...

Ultima Online’s next update will feature an overhaul to its quest...