What is RuneFest? We have reported on the announcements, but that’s the convention actually like? As I had only attended RuneScape’s 15th anniversary before, I was not sure exactly what to expect for my first one. But during a pre-event meeting, Communications Director Rich Eddy described it this way: “Imagine a mash up of E3, Gamescom, and Disneyworld in our crazy world.” With a description like that, I was definitely intrigued! And I wasn’t disappointed. It was quite a show — with so much more than a show.

“Runefest is as much about celebrating our players as it is about celebrating our games,” Eddy told attendees. And from the fare offered, that was apparent. The event added an extra evening the the day-long event, packing in a red-carpet Golden Gnomes award show, panels, cosplay and cooking contests, game shows, and a Jurassic park filled with mini golf, archery, maze, game terminals, and assorted other activities for players — all on top the theatrical keynote addresses. There was much to do while mingling with friends, guildmates, and devs. Check out the RuneFest hightlights!

Have you ever wanted to win an Oscar? if you are a RuneScape fan, you can aspire to acquire a coveted Golden Gnome instead! I mean, that hefty giant garden gnome in (painted on) gold is a true prize to be won. This year Jagex moved the awards show to its own evening and made it a red-carpet affair, which seemed to work very well; the audience was able to focus on just the show instead of myriad other distractions. 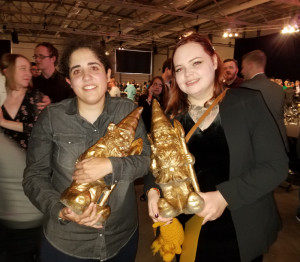 These awards were 100% about celebrating players and community members. I felt a bit underdressed (I have to figure out how to pack something fancier next time!), but I absolutely loved watching the community cheer on its own as each list of nominees and winners were announced. As at fancier awards show, there were MCs and commercial breaks with entertainment in between devs taking to the stage to announce the winners. Here’s this years Golden Gnome recipients:

Hands down, it was an amazing experience to sit back and watch the community cheer each other on and get emotional in support of their fellow players. Congratulations to all the nominees and winner. And you know what, to the community as well!

Where does the Disneyland vibe comes in? With the implementation of this year’s theme! In RuneScape terms it was based on Anachronia, and for OSRS, Fossil Island. Archaeology and dinos were the big focus this year, and the entire event was a Jurassic adventure, from the Indiana Jones-esque keynote trailer to the swag. And there was a mini-adventure park for players to enjoy, complete with activities and food courts.  Jagex even had a miniature park built in the convention center full of activities. Participants bobbed and weaved in between brush and trees, dodged dinosaurs, and even entered an erupting volcano (“Welcome, Joe!). 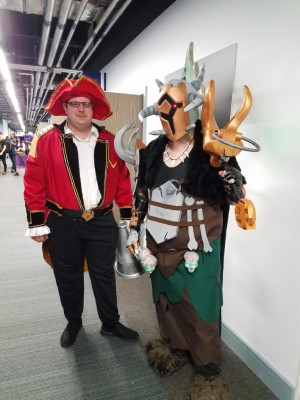 Time-wise, I only really had the chance to play the mini-golf (I proudly hold the title of getting the first hole-in-one on that vicious final hole!) and visit inside the volcano (where the new archaeology skill and mobile version could be played), but there was also a swamp maze, (toy) archery range, puzzle, skee-ball photo booth, art area, and craft corner. A little less Jurassic was the well-being lounge and the “Have Your Say…” corner where players could add ideas and comments or even try their hand at voice-acting lines for RS. And for each activity players did, they earned skilling chips. You could also hunt down J-Mods!

All dressed up with somewhere to go

I have to admit, on the first night I thought cosplay at RuneFest was just about wearing cloaks. I mean, both RuneScapes are all about cloaks, and players crave getting those top ones. So it made sense to me when I was seeing many as I mingled and walked about the Golden Gnomes. However, I was corrected the next day during the main event when the costumes really came out, and I got to see many more throughout the day and at the cosplay contest.

From a simple gnomes to elaborate light up costumes, players showed off their love of RS and OSRS by bringing various characters to life. You can see Yelps, the Ringmaster, Nomad, and more. There were even personal characters and a map! Watch them all come to life starting at the 2:48:30 mark of the full RuneFest video below. Sadly, the massive dragon had a malfunction at that point and was unable to enter the contest itself, but you could see it later around the rest of the con in its glory!

Certainly one of the most impressive cosplays from #RuneFest2019 👏

Who won the final two Golden Gnomes of RuneFest 2019? Those went to Toxic Oxbar as Plague Doctor (who received the judges award for most creative cosplay), and to Golden Light with Bandolf with Scyth (who won as the audience favorite).

There were ample opportunities to mingle and have fun while celebrating both RuneScape and Old School RuneScape. With all the events and all the activities, I can see why so many players make the trek to RuneFest. Get a taste of this year’s adventure in our gallery! Hopefully, I’ll be able to attend more years and immerse myself even further in the world of Geilinor and its player residents.

EVE Online’s new ‘expert systems’ are, uh, not winning over the...